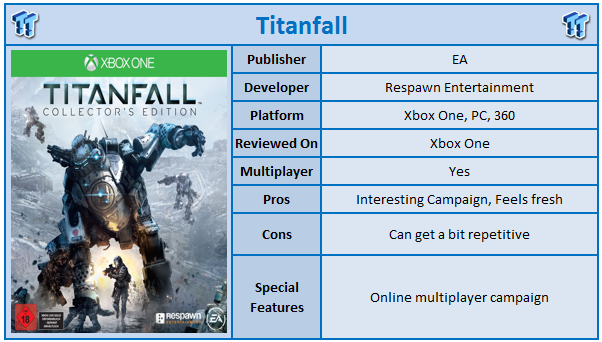 It seems that every second word out of Microsoft's mouth recently with regards to the Xbox One has been Titanfall. There is little doubt that a lot is riding on this game for Microsoft, so much so they struck a deal with EA to keep it an Xbox exclusive on console, at least for this first game. This has always been seen as when the Xbox One truly launches and, considering the firmware update and addition of headphone support for this launch, it's hard to argue with that sentiment. This is the game you purchased your Xbox One for, and thankfully, it's actually quite good, but it's not without its problems.

The first interesting fact about Titanfall when compared to other games of this ilk is that there is no single player campaign. Titanfall is multiplayer only and that does mean you need to spend the ten dollars a month for Xbox Live to play it. However, that's not to say there isn't a campaign. Campaign is present, but it's all multiplayer based. The game somewhat forces you to finish the campaign before really getting into the game, and that may not be in all players' favour despite the campaign in general actually being quite impressive.

In the campaign, you don't select which side that you fight for; instead, you generally begin fighting as the IMC before moving onto the militia's campaign. Each campaign has nine missions that take place on the same maps only you see the different side of the combat depending on who you are fighting as.

The interesting aspect is that the campaign will still progress even if you lose the battle, so it is entirely possible to finish the campaign losing every battle. This seems more like a lengthy tutorial than a proper campaign mode despite there being some semblance of a campaign present. 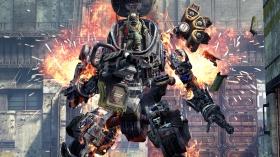 Once you finish the campaign, you unlock the classic mode, which is where you can select which type of game you want to play. There are numerous game modes to select from, most of which combine the combat between pilots and titans, but there are two modes that eliminate the titans/pilots and have players either only on foot or in these hulking machines duking it out. The numerous different modes help the game's longevity, but only two of the modes are explored during the campaign: hardpoint (capture the points) and attrition (team deathmatch).

There is also the opportunity to have the titans you bring into the battle roaming by themselves; after numerous hours of gameplay, we found this be the best way to utilize them because they can take on group of enemies as you take on another group whilst earning double the experience points. It is this mix of small people versus hulking great mechanical machines that really have this game feeling fresh and new. Taking on a titan as a pilot with regular arms is a recipe for disaster, but the game is balanced enough that those who go in with a strategy can generally fight well against the titans; it's not a pointless exercise. 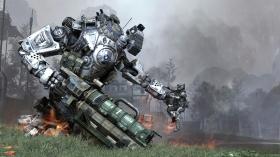 The primary goal of the game is to earn a titan and defeat the enemy. You earn titanfalls (titans falling out of the sky ready for use) by defeating enemies, capturing points, or helping takedown titans. One thing that Titanfall does very well is reward you for almost everything you do. To be successful in Titanfall, you do not need to be a crack shot or play the game for hours a day.

Something that really assists with this is the bots that the game places in every map. They are incredibly dumb AI but allow you to easily rack up some points and feel like you are contributing to the effort. The bots are the area where this game differs most from the competition. Even though on paper it may seem stupid, it actually works.

To help with this, the game also offers a number of challenges to complete that also give the feeling that you are progressing as a player even if you are not near the top of the leaderboards. After each battle, you are shown how close you are to six of the challenges, which gives you something to focus on during the next battle. These can be as simple as running a particular amount of kilometres as a pilot. In this case, you might focus on being a pilot the next battle instead of gaining a titan. It does mix the game up.

Something that Titanfall does very well in comparison to other games of this ilk is make you feel like you are playing well or achieving something even when you are not necessarily the best player around. This is achieved by two features of the game: the bots and the challenges on offer. The bots are very bad AI characters that back up each side and generally just stand there waiting to be shot.

They assist you in gaining easy points, but they also give you the impression that you are somewhat contributing to the war effort even if you know you are playing badly. We are not the biggest fans of Call of Duty multiplayer due to its hardcore nature, but Titanfall seems to strike that balance between casual and somewhat professional gaming well. 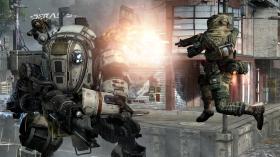 Despite offering numerous game modes, there will be a point in this game where you hit a wall. If you are someone that has put hundreds of hours into Call of Duty, you will likely not have this issue, but there is a point where the game does expose itself as just basically team deathmatch with massive robots, and this is where Titanfall will face its biggest challenge. Considering that this is a multiplayer only game, its longevity is a big deal. If you are reading this a few months after release, we strongly suggest trying to find out player numbers before purchase. It's easy to find games now, but we can't predict the future.

There are also problems with the game that could have easily been avoided and really should have been. First of all, the party system is a shambles right now, and it is quite difficult to get games going. Microsoft has recently improved upon this, and its better, but it's nowhere near as good as what was found on the Xbox 360. The other thing is that when joining games with friends, you cannot actually determine you will be on the same team. These are things that are crucial to the success of a multiplayer only game, but it just doesn't work well. This game is going to have trouble attracting the clan crowd because it's very hard to setup matches to be a clan versus clan. It's all random. 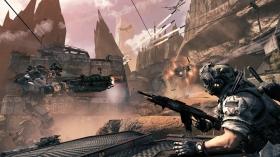 On the visual side of things, on the Xbox One, Titanfall impresses enough but doesn't really blow you away. It runs on the lower-end of the high definition scale, and you can tell. The developers are promising to revisit this in the future if they can, but the visuals just get the job done right now. For a flagship next generation title, this is a bit disappointing. Along with this, there are often frame rate drops to nearly single digit numbers. This seems to happen where there are 2 or 3 titans on screen, rockets flying everywhere, and large explosions. It did happen enough that it became frustrating, so hopefully they can improve upon this as well.

Titanfall is a refreshing new game in the first person shooter genre that does enough to warrant its place on your shelf for the Xbox One console. It clearly has taken some learnings from Call of Duty but also has put its own stamp on the genre with challenges and, of course, the large titans. Given this is a brand new development team, albeit one with a lot of experience, and on a brand new console, Titanfall is an excellent effort.

It's just a shame that some of the more obvious flaws with the game could not be resolved before launch. We are in two minds as to whether this one has the longevity to last it out, but it has all the ingredients to be a game you will want to play for the medium to long term.

PRICING: You can find Titanfall for sale below. The prices listed are valid at the time of writing but can change at any time. Click the link to see the very latest pricing for the best deal.

United States: Titanfall (Xbox One) retails for $59.99 at Amazon.

Canada: Titanfall (Xbox One) retails for CDN$58.61 at Amazon Canada.