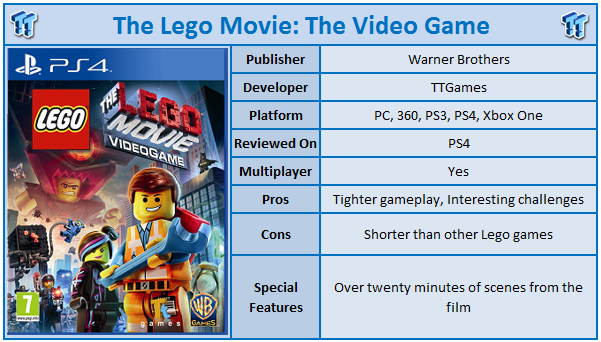 Note: As the video game follows the same storyline as the film, there may be slight movie spoilers in this review.

There has to be a point where we get a bit sick of these Lego games. It seems that every time a major film franchise is announced that a Lego game follows, but they continue to sell well and so it continues. However, this latest game is a bit different. Instead of being based on a famous franchise, it is based on the Lego Universe itself, and that is a major reason why this is the best Lego game that TTGames has ever developed. Who would have thought that actually focusing on Lego being Lego would make for such a successful game? In many ways, you have to wonder why it has taken so long for this to happen, but the result has made the wait worth it.

The Lego Movie Video Game follows the same plot line as the movie. Emmet--a construction worker trying to move up in the world, win friends, and have fun--becomes the unlikely protagonist in a superhero story of trying to save the Lego Universe from complete destruction at the hands of President Business.

In previous times, the various universes of Lego could mix together and come up with interesting creations, but Business has put a stop to this, meaning that the Lego Universes must exist in their own world's. Emmet discovers the magical piece de resistance that can bring an end to this, and it is up to you as the player to do so. 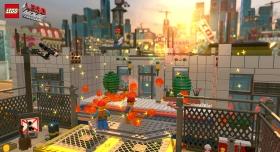 Where the Lego Movie Game differs from its predecessors is the tightness of its levels and gameplay. With the previous Lego games, we always found ourselves having to force ourselves to the end of most levels with most of them dragging on for far too long. The Lego Movie changes this and, just when you think a level is dragging on, it finishes and, quite often, the gameplay changes to something different.

That's not to say the traditional gameplay styles we have seen in the past with the Lego games is gone; they are there, but it's a lot more logical to figure out the puzzles. Whereas in the past you had to sometimes be a super fan of the franchises on offer to figure out some of the puzzles, in this game you just need to think like you are building Lego toys, and it makes the game much more enjoyable to play. The most we got stuck on a puzzle was around five minutes, which leads to a game that flows well.

There have also been some additions to the game that mix up the monotonous nature of some of the previous games nicely. First of all, between missions, you actually get to help build Lego toys. A Lego structure displays on the screen and you need to select the missing piece. The quicker you do this, the more currency you gain, and it's a nice distraction for the between mission loading times. 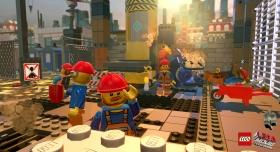 There is also now the concept of master builders in the game. If you try to build certain structures with Emmet, for example, he won't be able to build them, and so you need to find a master builder character. Along with this, there are Lego instruction manuals. To build some of the larger structures, you need to find the instruction manuals that are required. It's a small touch, but it really builds into the fact that you are exploring the entire Lego universe rather than a movie franchise. And finally, there are some special builds that require you to find special blocks that flash within the level. All interesting differences when compared to the past titles.

Aside from this, the gameplay remains the same as the previous titles: you have to bash Lego bricks to find more, build structures to assist other characters, and use each character's special ability. However, we found it quite easy to figure out what ability needed to be used when, and this has not always been in the case with the Lego games.

This just shows how much the gameplay has been tightened up for this release. The game is noticeably shorter than other Lego titles, but we didn't find issue with this as the game flowed so well. Any longer and it would have seemed like it was dragging for the sake of it.

One of the key factors as to why this is a better Lego game than most is its variety. Throughout the game, you will visit four Lego universes and see many more in cut scenes. This is where the game really shines. Just as you are becoming bored with the city gameplay, it will throw you through to the western universe of Flatbush Gulch, which features different challenges and characters. It really is one of the best-paced games in the franchise's history, and the fact that the game follows along the same lines of the movie really has helped. This has forced TTGames to be tight with the story, and it has paid off in spades. 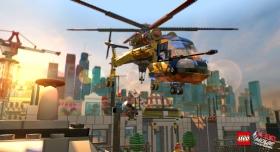 When it comes to comparisons to the movie itself, it remains very close to the cinematic release, and this is both a positive and a negative. It's positive because the movie is actually incredibly funny, but negative because you really have to see the movie before playing it (and therefore know exactly what is going to happen). It also doesn't explore the Lego universe beyond what the movie offers. There is over twenty minutes of scenes from the movie included, and these form some of the more memorable moments from the film. Some of the traditional humour we have seen from the TTGames writers is not as present due to this, but it still remains a very funny game. We laughed many times before the credits rolled. 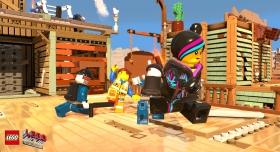 Visually, the game is impressive, although we did expect a little bit more of an improvement on the PS4 version when compared to the last generation consoles. No frame rate hiccups were found, and the world of Lego has been built extremely well. There do seem to be slight frame rate issues when the movie cut scenes are playing, but, other than that, it plays fine.

On the sound side of things, the voice acting is done well and their movie counterparts, including Morgan Freeman, voice most characters. The unlikely dance anthem from the game 'Everything is Awesome' is also present, and we warn you, it will stick in your head for days afterwards.

The Lego Movie Video Game surprised us. We weren't expecting a bad game, but we were certainly expecting a run of the mill title based on previous Lego efforts. This is actually a very good movie licensed game that uses its source material well. It proves that you don't need a franchise to make a good Lego game and we hope TTGames explore the Lego universe more now instead of just building movie/comic licensed Lego games.

PRICING: You can find The Lego Movie: The Video Game for PlayStation 4 for sale below. The prices listed are valid at the time of writing, but can change at any time. Click the link to see the very latest pricing for the best deal.

United States: The Lego Movie: The Video Game for PlayStation 4 retails for $59.96 at Amazon.

Canada: The Lego Movie: The Video Game for PlayStation 4 retails for $59.95 at Amazon Canada.