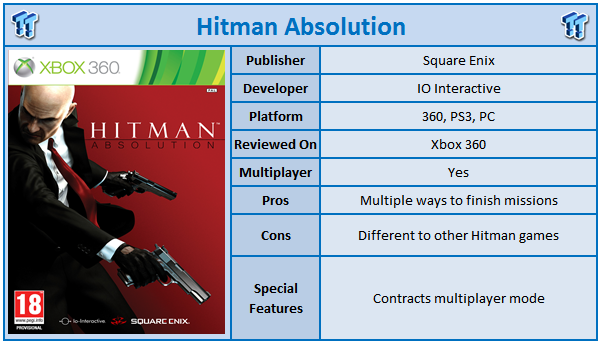 As a series Hitman has been quite successful and this is why it's puzzling that we are now only just getting the return of the game. Hitman Blood Money was one of the better games from the earliest times of this generation, but IO Interactive decided to put that to the side and come up with the new IP.

This game became Kane & Lynch which had middling success in both sales and critical format. So six years later we have the return of Agent 47 and it's not without changes. Absolution completely changes up the series in many ways and we still aren't sure if all the changes and decisions made were the right ones.

Absolution picks up with Agent 47 being tasked to kill his agency handler Diana. She has gone rogue and has been selling secrets to enemies of the agency so his final contract becomes her. The agency has produced another agent from a child, Victoria with Diana on her deathbed asking 47 to protect her at all costs. This is what the story primarily revolves around; the protection of Victoria and escaping from the agency that 47 once called home. From the outset this shows just how much of a departure Absolution is to the regular format with previous games tasking 47 with contracts to fulfil for the agency. 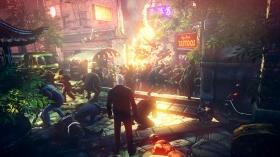 In terms of the gameplay there are a lot of elements that have returned from previous games. On some of the missions you will be tasked with taking down a target and you can either choose to go in all guns blazing or make the death look like an accident with the latter not only scoring you more points, but generally being more satisfying to do as well. Hitman can be seen as a puzzle game - trying to concoct together various environmental elements such as leaking oil and a bullet to take out enemies unseen.

This is only apparent on some of the levels. On many levels within the game there are no targets and instead it is 47's goal to reach another area to continue the story. As well as this there are times where the game takes control from you and performs kills in cut scenes. For a series which has focused so much on clean quiet kills from a gameplay perspective, to have this happen is frustrating. There are some sections in the game where quiet kills just cannot occur.

This is where you will like this game or not. Whilst in the past each mission was one huge environment for 47 to traverse and come up with sneaky ways to take out the target, in this game you are instead tasked with basically getting from point a to point b. Hitman in many ways becomes a third person shooter with the amount of sandbox missions able to be counted on less than two hands. Given that there are 20 missions overall in the game, this is a bit disappointing.

However, on those levels which do give you the freedom to explore and come up with various ways to take out the targets, the game absolutely shines. Previously seen at E3, the King of Chinatown level is one such example where there is many different ways to take out the target such as poisoning fish or blowing up a car. And it is these missions that you will revisit over and over again to try and come up with different ways to end the mission without being seen.

As well as the actual targets each mission contains a number of challenges to complete. Sometimes these challenges are to take out the targets in various different ways whilst other times it can be tasks such as finishing the mission only using 47's suit. Given that you very often traverse areas where you should not be, doing this is harder than it sounds.

Many of the elements we have seen in previous titles have again come back. You can still take the disguises of other characters although this is a bit harder than last time around.

Enemies will spot that you are not one of them quite easily and so it becomes a case of still having to focus on stealth even when blended in. To aid with this, 47 now has an instinct ability which allows you to see enemies through walls and walk near enemies in disguise without being spotted. You gain more instinct by performing quiet kills and tasks.

One of the more frustrating elements of Absolution is the change from limited save games to checkpoints. Instead of being able to save at any point in the game (within a limited number), you now have to track down and find checkpoints in the level. They are generally off the beaten track and this can be very frustrating especially on the tougher levels. The checkpoints also do not get retained if you leave your game which we have no idea why IO Interactive decided that was a good idea. 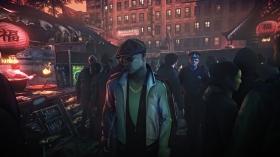 The enemy AI generally revolves around them being able to determine you are 47 rather than actually being tough. When things go bad you generally can get out of a tight spot with your bullets except towards the end of the game where that type of tactic just gets impossible due to the weaponry they have. Once they spot you the game moves into a very Metal Gear like alarm system. At the highest level they hunt you and shoot on sight whilst if you can manage to hide long enough, they will give up and lower the alarm level. Of course the best way is to not be spotted at all and in general this is possible on every mission.

On the visual and environmental side of things the game is generally impressive. Whilst there is quite a variety to the locations that you will visit during your time with the game, it is not as varied as it was in Blood Money with some locations being visited more than once. Some of the missions are quite large in size whilst others are almost corridors only. It goes without saying the larger missions are the ones where 47's abilities can really shine. One thing that is true is that in general IO Interactive has used the environments to the best of their abilities with 47 being able to perform numerous environmental based kills on his targets.

Multiplayer comes in the form of contracts mode and in an ironic twist this system is much closer to that of the older games. You can either build or download contracts from other users and basically you are dropped into a world and have to kill targets silently to fulfil the contract. As you do so you gain money which can be used to upgrade your weaponry in multiplayer. This is an interesting take on multiplayer and we hope that users really embrace this system because it's entirely possible this could give the game a lot of legs.

Hitman: Absolution is a game that made us think about how we review games in many ways. Should we review a game based on what the name is on the box, or what the content actually is. Of course the latter is the answer, but we can't help but feel that this is not the greatest Hitman game. It's significantly different to other Hitman titles, but it's also not a bad game. If you come into the game expecting Blood Money 2 you will be disappointed, but if you look past this you will find a competent Hitman game that has just enough elements of its predecessors to ensure you should play as 47 again.