When Nintendo announced the 3DS console, a lot of the comments that started to appear were that it looked like a Nintendo 64 in terms of power. Nintendo was clearly listening, because some of the blockbuster games to hit the unit so far are Nintendo 64 ports and recently Japan received the latest one, StarFox 64 which was originally known as Lylat Wars in the European and Australian territories. Interestingly, Nintendo has failed to return to the StarFox universe (other than StarFox Adventures on the Gamecube, which was more of a spinoff) since this game originally came out and so the return of Fox Mcloud is well overdue. We recently imported a copy of the game from Japan and went hands on to see how the game was shaping up for its US/European launch in September. The answer is, very well indeed!

The story picks up with Andross, the main antagonist of the Lylat Universe having been exiled to the planet Venom. However General Pepper has become worried and hires James Mcloud and his crew to find out why there have been strange happenings on that planet recently and decide to investigate and find out just what is going on. Upon arrival one of the crew members turns on the team, leading to James and Peppy being captured by Andross on the planet Venom. The crew rebuilds with Fox now in charge (Fox being James' son) and after Andross launches an attack on the Lylat universe, the team decides to end this once and for all. 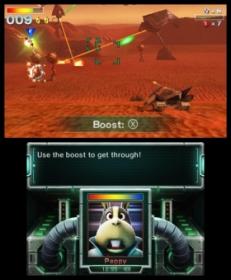 As you may have guessed, StarFox 64 is an arcade action style title with a third person perspective. Throughout the various missions on offer you will generally take control of a spacecraft, however in certain missions featured in the game you will have the ability to try another challenge such as using a tank on the ground. Each playthrough contains seven missions; however, there is more than seven featured in the game. Just like the original StarFox 64/Lylat Wars, there is branching paths in the game with one option offering a much more difficult path to play through. So there is most definitely replay value in this title, and even so, one of the key points of the StarFox universe is trying to beat your high score which is where the arcade elements of the game really come to the fore.

There have been some notable improvements to the game for the 3DS. Having two screens gives the developers more real estate and whilst they haven't used it as much as they probably could have, seeing the crafts condition on the screen is useful during the tougher missions.

Given that the game has a map during some missions, it is a real shame that those missions do not appear in a large format on the lower screen, especially when trying to track down enemies.

Another improvement is that the developers have used the gyroscope feature of the unit. You can choose to use the analogue nub to move the spaceship around, or physically move the 3DS system around. We played around with the feature and were impressed by how polished it is. We were afraid that it would completely destroy the 3D element of the game and turn it into a blurry mess. Those fears were unfounded, however...

There is no doubt that due to the gyroscope feature the developers have not been able to implement the 3D as impressive as they may have been able to, had they not been required to counter the movement of the unit and the effect of that. It is not to say that the 3D feature is completely pointless, but it is not as impressive as that seen in Ocarina of Time for example. The graphics have had a major overhaul since the N64 version, however, and the game is beautiful to look at. Even with a lot of action on the screen the game doesn't skip a beat. Overall, the game is a very impressive game to look at, in both 2D and 3D mode.

The game does contain multiplayer, however as it is only offline, we have not been able to play a game of it yet. Nintendo is promising some unique multiplayer modes, however, but we can't help but think that the lack of internet gameplay is really going to harm the game in the long run. We have no idea why Nintendo decided this was a good idea, but that is what we are stuck with. One of the best features the final game will see in multiplayer is that the 3DS is going to be capturing the faces of the players and show them above the ships as they fly about, so as you take your friend out, you will be able to see their facial expression.

StarFox 64 was a very good game on the N64 version and it looks like the 3DS version will not only do it justice, but improve on it in many ways. We consider the version we played to be final from a gameplay perspective with Nintendo and friends in the process of localizing the language and text in the game. With this in mind, there is no doubt that StarFox 64 will be one of the "must pickup" titles for the 3DS system in 2011.