All NewsBusiness, Financial & LegalCases, Cooling & PSUContests & GiveawaysCPU, APU & ChipsetsDealsDisplays & ProjectorsGamingMotherboardsScience, Space, Health & RoboticsStorageVideo Cards & GPUsVirtual & Augmented Reality
All ReviewsAll ArticlesAudio, Sound & SpeakersCases, Cooling & PSUCPUs, Chipsets & SoCsComputer SystemsDisplays & ProjectorsGamingMotherboardsNetworkingPeripheralsRAMStorageVideo Cards & GPUs
GuidesGamingGPUsSSDsNewsletterAboutPrivacyForums
PlayStation 5 ProRX 7900 XTXAMD Zen 4RTX 4090RTX 4080RTX 4070GTA 6Elon MuskHDMI 2.1
GIVEAWAY: Netac Shadow Series RGB DDR5-4800 (16GB x 2) dual-channel memory kits
The wind rushes by your face with the consistent calm humming of a sturdy engine. Objects densely scattered throughout the bland urban landscape vaguely resembling bustling human bodies that were only seconds ago entirely irrelevant to your existence, now start to come into plain sight. Although they still maintain their irrelevancy - you could crush them, destroy them, consume them. As you rocket down to their plane, a brief fear for your own mortality dissolves in your mind, replaced by a soothing sense of sheer freedom, for you are no slave to laws, physics or otherwise.

Upon the arrival of your body from its self propelled ascent into the city sky, the solid concrete ground fractures beneath you, accepting the full force of your impact like a brittle shell. Cries of fear and shock meet your ears, but only for the briefest of moments, as your time on this surface is cut short yet again by the power in your legs, launching you into the sky above, away from the chaos for another few blissful seconds.

No, you're not sound asleep, dreaming some alarmingly awesome dream, you're playing the latest action title to hit the gaming scene featuring a super-human like protagonist at your disposal. You are playing Prototype. You are Alex Mercer and you have the ability to navigate the city like the wind itself and destroy its occupants like a natural disaster.

Alex is no ordinary human; well, he isn't anymore. At first, Prototype introduces Alex to the gamer as a very powerful supernatural force that could have easily arrived from another dimension or world. The abilities and gameplay that we saw in the trailers and various other forms of hype leading up to the release are at your disposal more or less right away. Soon enough, however, Prototype will take these away from you and slow things down, bringing Alex back down to earth, literally, as the human he is.

By introducing Alex to the gamer in all his glory right from the get go, only to then rewind time in the storyline, Prototype achieves two things, one good, one bad. The good thing that Prototype achieves is an instant 'hook', or in other words, an instant wow factor only moments after the game disc is first inserted that grabs your attention like few other games have ever achieved so quickly. This is a grip the game will rely on to keep you playing. 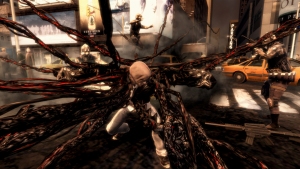 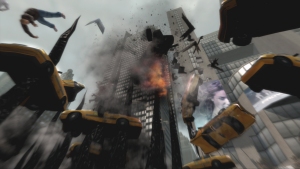 The other thing, the bad thing, that Prototype achieves with this setup is simply this - for quite a few gamers, the first few minutes of gameplay will provide a peak, where everything afterwards in the short to medium term is downhill action wise and hence fun wise. This reality proves hard for Prototype to shake once it has set in.

The problem isn't so much that Prototype peaks too quickly, but rather, the bigger issue seems to be the game almost entirely relies on its action gameplay to keep you going. The graphics are decent, but they're not going to wow you. The storyline is very cliche and it just didn't keep me interested. The New York City environment is grand in scale, but lacks detail, character, and charm - the people in the city are many in number, but provide very little if any real substance to the game. So really, by giving you a taste of what the gameplay can be, but then taking it away from you and instead offering a watered down version for a good while, Prototype doesn't do itself many favours. It was an interesting approach to the storyline, but one that ultimately didn't work for me.

Unfortunately, by the time you have developed Alex to the level where you can share some of the abilities experienced at the very beginning of the game, much of what seemed to make the gameplay so unique actually starts to lose its edge. Yeah, it's fantastic that Alex can run up and down building walls with ease and glide across building tops like a bird, but the cool factor is always going to reach a limit and then start to retract, and then what?

What occurs next is basically an onset of repetition and a loss of excitement. You see, how you move about should really never be the centrepiece to a game, at least not an action game like Prototype. Why? Because you're going to do it so much that eventually it has to lose its freshness - it just has to. No way around it. So you'd better hope, once that happens, something else is there to keep your chin up and your eyes open. I'm not going to sit here and say the way you can control Alex in Prototype isn't down right cool, I'm just going to say it isn't nearly as cool 1 hour into the game as it was 1 minute in, and what's left to pick up the slack is limited. 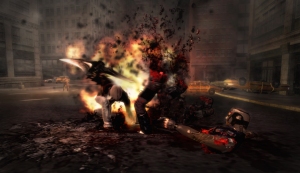 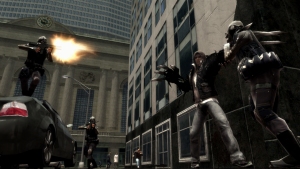 Now, that's not to say all the abilities you have access to while controlling Alex are subject to swift declines into mediocrity. Some of the abilities, mostly those related to combat, maintain their positive influence on the gameplay more or less throughout the entire game. As you progress further into the game, Alex will adopt more and more special combat moves and functions, as his body morphs at the arms into heinous tools of destruction on your command.

In fact, Alex can be so overpowering at times that you can't help but think maybe you've accidentally enabled God mode. Games like Crackdown and The Darkness have before showcased some fairly powerful gamer controlled characters, but Prototype pushes the envelope here. On the other hand, though, Prototype isn't exactly an easy game - there are some enemies that are basically just as fast, destructive, and powerful as you, although most enemies are little more than annoying blips on your radar of vengeance.

Perhaps the most interesting ability that Alex possesses is the "consume" ability. This ability works as it sounds - you can consume people in a feast like manner and take on their visual appearance. The storyline's development largely depends on consuming people in the form of acquiring memories from key characters, but the gameplay also makes use of consuming, often pairing it up with stealth missions. 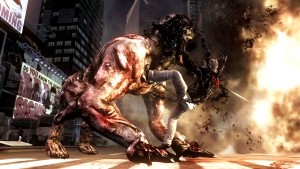 However, while the consumption of people can offer a decent change of pace from the game's repetition prone action gameplay, the actual implementation of the consume ability in the gameplay is often riddled with poor AI. When I consume the leader of a group to gain access to a locked door and do so in clear sight of all the enemies in the group, I don't expect to be able to flee from the scene while being chased, lose the heat and then return to the scene a few minutes later completely unsuspected in the form of that very same leader they all saw eaten alive. That and the fact you can take on the form of someone other than yourself and still run and jump around like a superhero without attracting much in the way of attention from your enemies, just because you don't look like the guy they're after, kinda points to some pretty questionable AI.

On top of this, despite following an open world "sandbox" gameplay model, Prototype is very much a "do this, then this, then go do that" type of game, rarely providing more to the gamer than following a smudge on the screen until you get to a particular waypoint. Sure, you can usually choose which smudge to go follow, but once you get there, the game can feel like an interactive recipe. Consume this guy. Go here and destroy this. Run away to this point. Let the cake stand for 15 minutes to cool before icing. You get the picture.

Perhaps then Prototype is best enjoyed in smaller doses. There is no doubt that every time you pick up that controller for the first time in a Prototype gaming session, you feel that spark of sensational game design that is hidden in there somewhere. But that's all it really is - a spark. Soon enough, the game is not quite as cool as it was a few minutes ago and it's time to put the controller down again.

Prototype is definitely not a bad game, it just isn't the must have action title it could have been. As Alex Mercer, you have access to some insane abilities that seem to unleash a level of creativity and uniqueness rarely before seen in gaming and the action provided as a result is quite intense at times, but this intensity just doesn't last long enough. The mistake Prototype seems to make is assuming that just because the gamer controlled character can do all these physically impossible things, it must mean he is fun to control. But that just isn't always the case and it certainly isn't a constant source of enjoyment from start to finish. Such a game still needs the environmental detail and atmosphere to impress, the story to immerse, the variation to fuel, none of which Prototype does nearly well enough. Give it a rent by all means, but I wouldn't recommend a blind purchase, unless you're open to "one and done" gaming purchases.

You can currently pick up Prototype for the Xbox 360over at Newegg for 52.99 U.S. Dollars which includes shipping. 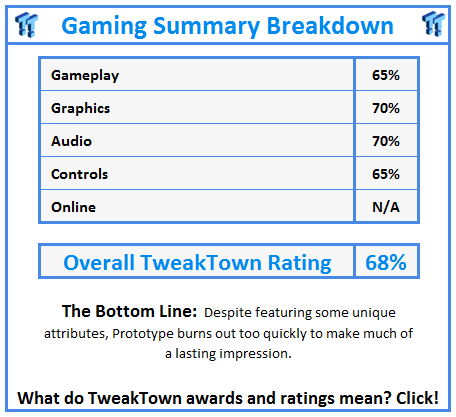