All NewsBusiness, Financial & LegalCases, Cooling & PSUContests & GiveawaysCPU, APU & ChipsetsDealsDisplays & ProjectorsGamingMotherboardsScience, Space & RoboticsStorageVideo CardsVirtual & Augmented Reality
All ReviewsAll ArticlesAudio, Sound & SpeakersCases, Cooling & PSUCPUs, Chipsets & SoCsComputer SystemsDisplays & ProjectorsGamingMotherboardsNetworkingPeripheralsRAMStorageVideo Cards
GuidesGamingAsk the ExpertsNewsletterAboutForums
RTX 3090 TiRTX 4090Diablo 2GTA 6Halo InfiniteElon MuskRTX 3080HDMI 2.1
In some ways 2009 has been kind to the movie game genre. We've seen a number of blockbuster titles for some old and new movies and the majority have not been the stinkers of the past. Maybe studios are starting to learn that movie does not necessarily have to equal cash in. However, our opinion on this changed somewhat when we loaded Terminator Salvation by GRIN. Incidentally, this is GRIN's third game to ship in 2009; in fact the third to ship in the past four months and Terminator Salvation demonstrates why that may not have been a good idea. The idea behind it was not so bad, but the execution has been poor.

Terminator Salvation puts you once again in the role of John Conner, a human targeted by Skynet (for those who have been asleep for the last 20 or so years, Skynet is a computer based system gone sentient on the world). This isn't a surprise considering the Terminator universe, but this is the first indication of the complete lack of originality in this title. The storyline of the game revolves around saving some survivors, left for dead by the resistance fighters and how John and his cohorts proceed to rescue them. Cliche indeed and you will not want to play this game for the story. One added bonus for fans of the universe is that this game is not based on the movie and plays out two years before the current films storyline. 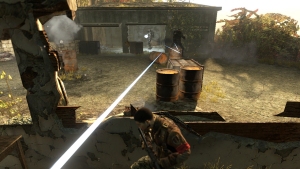 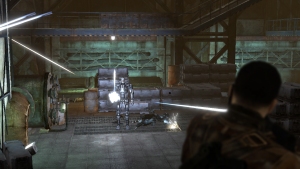 The first problem with the game is the enemies. They are generally dumb and have 'trigger' points. That is, once John reaches a particular area of a map they become aware and attack John. Don't get closer than that and you can generally snipe them off one at a time. Also, it seems to take a lot of ammo to take an enemy down. This becomes frustrating, especially when the game is insistent on sending the same enemies over and over again. There is some interesting factors to the gameplay such as having to flank enemies to hit them from behind, but the developers just didn't seem to know when to stop with each encounter and instead of being fun and action packed, they become boring and tedious.

The other big problem with this game is the length. There is nine chapters which may sound like a lot, but it is easy to clear this within five hours. For a downloadable game this would have been acceptable, but considering WBIE is expecting you to pony up the full general amount for a game, this is not acceptable. There is also no real incentive to play through the game again, aside from trophies and achievements on the PS3 and Xbox 360 versions of the title respectively. You can if you wish play through levels again once completed, but there is nothing memorable enough to warrant you doing so. 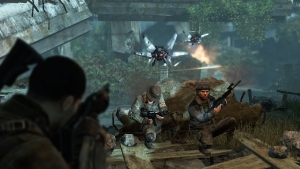 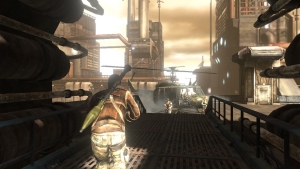 Although up until this point we have been rather critical on the game, it is not a disaster. The fact is the first hour or so is enjoyable (until you realise that the gameplay continues to be A to B and shoot lots and lots of enemies). The controls and mechanics of the game work quite well with the biggest problem being that we have seen this type of action done before and much better. Had Terminator Salvation come up 4-5 years ago it probably would have been impressive, but in 2009 it just doesn't stack up. And although it is not compulsory for a game to have multiplayer, we really don't think that Terminator Salvation could have really hit the mark here either. The fact remains that if you are going to ship a five hour or less game it really should have some reason to replay or go online with.

The other disappointment with the game is the environments the action takes place in. There is no real variety and while the game does contain both night and day missions, generally there is nothing really interesting or flattering about the levels. The enemies also are fairly stock standard giving us a very 'packaged goods' feel to the game where the developers knew they had some tickboxes to hit, hit those and shipped the game. This one really suffered from coming out day and date with the movie we think. 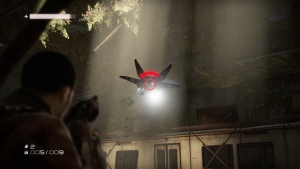 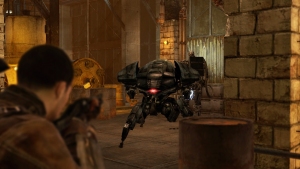 Visually the game is nothing to write home about either. While it would be very harsh to call them PS2 level graphics, it is no where near what we have seen on the current systems. The animation is a bit stilted and doesn't seem natural and while the enemies are quite detailed, the overall game disappoints in this area. The voice acting and music also are disappointing. The actors and actresses from the film are not present and the music gets the job done. There is cheesy line after cheesy line in the game, but considering the way the Terminator universe is we aren't entirely sure this is the fault of the script writer.

Terminator Salvation is a game that has many bad points, but also is not a disaster. The biggest problem with the game is the lack of replay value and the short length of the campaign. For those looking for a solid night's rental then this will hit the mark, but for a purchase we would strongly recommend waiting until it hits the bargain bin. It's worth playing, but not for the full price. If you go in with no expectations and don't mind a generic shooter, then Terminator Salvation may just be the rental for you. 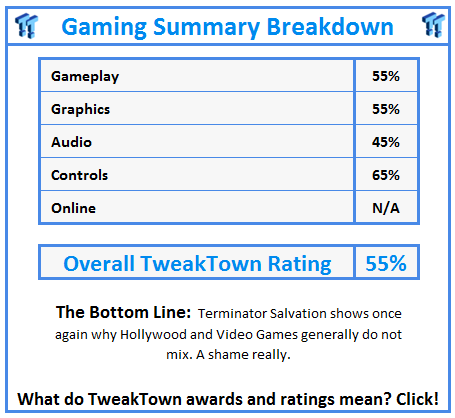