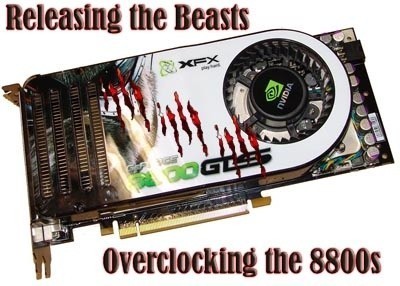 It's clear that the power on offer from the new GeForce 8800GTS and GTX beasts is more than enough for most people, though honestly - who cares? There is nothing wrong with wanting more power and this is where overclocking comes in.

The main thing we want to know today; can the 8800 GTS, which sits significantly cheaper, come in and match or even beat GTX performance at stock speeds? And if it does, how much further can the 8800 GTX go to make it worth your while to spend those extra hard earned dollars on it, as opposed to the GTS variant?

In this article we're not going to look at the graphics cards, we've already done that. Instead we will have a quick look at our test system setup and what we got with our overclocks. From there it's straight into the benchmarks as that's all we really need to see here today.


With Coolbits not working on the latest version of the nVidia drivers, it was time to go diving into some other program to use so we could start overclocking our XFX graphics cards.

Surprisingly, the current beta version of ATI Tool worked almost without a hitch. We thought we would be slack and try the auto detect feature but as soon as it went about 4MHz up on the core, it crapped out and we had artifacts everywhere. Using the old manual method - increase the clock speeds, run a 3DMark, rinse and repeat until we crashed something or got artifacts, we got our maximum speed on both the GeForce 8800 GTX and GTS.

We can see in our first benchmark the massive overclocking on the GTS brings it to similar performance of the standard clocked GTX.

The GTX overclock wasn't as significant as what the GTS offered, so while we do see an increase, it isn't nearly as big as to what is on offer from the GTS which makes it even more impressive considering the price difference between the two cards.

The more intensive 3DMark06 also sees the significant overclock stand out for the GTS. While it does come close to the GTX, when we overclock the most expensive card, we see another nice boost in performance for the top dog.

We can see in our non-HDR tests that the GTS wasn't quite hitting the CPU wall but when we overclocked, it was sitting up with the GTX.

We can also see the overclocked GTX has no performance gains at all here. As soon as we turn on HDR though and start moving up the resolutions again, we can see the difference a lot easier with the overclocked GTS just trailing behind a stock clocked GTX.

The GTX saw no gains when it came to overclocking though the GTS on the other hand rocks along and gets some very nice gains across the board.

We see gains in the minimum on both cards but when we move to the average the GTX doesn't move much from 1280 x 1024. It's only at the higher resolutions we really see a difference.

The overclock for the GTX doesn't see too much happening in COH though the GTS shows significant gains across the board especially when it comes to the minimum FPS, which is clearly the most important.

Our high quality tests let us separate the men from the boys and the ladies from the girls. If the cards weren't struggling before they will start to now. ATI and the GeForce 8800 series are able to offer HDR and AA at the same time unlike older nVidia cards.

In Lost Coast when we aren't seeing a CPU limitation, we can see that it is able to make use of the new found performance from both cards.

GeForce 8800 GTS offers an absolutely huge overclock thanks to how generous nVidia and its partners have been with the core. Generally speaking, the overclock brings it pretty close to the performance of a stock clocked GeForce 8800 GTX. With that said though, the GTX doesn't have any problems with overclocking either giving it the ability to go up and beyond what it was doing at default.

If you were thinking about getting a GTX and have thought, "Oh maybe I will get a GTS instead, due to the overclock on offer...", if you can afford the GTX, we would recommend that you continue with that and purchase it because it will be nice to have this kind of performance without having to overclock your graphics card.

One of the biggest things that you have to take note of is the frame rates you're getting with these overclocked cards. A GTX at default speeds with AA, AF and HDR on when running at 1920 x 1200 is getting an average of 104 FPS and when overclocked 114FPS. Is it worth the mucking around for an extra 10FPS? Yes, it is roughly 10% faster but you're honestly not going to see a real-world difference in game and all you're doing is increasing the amount of work your GPU is doing. Heck, you could probably even underclock the GTX if you wanted... but that's just silly.

You have to understand our point though - move away from 3DMark and move away from the FPS difference being 150FPS average and 175FPS average and think, is it really worth even contemplating overclocking your graphics card? It's pretty safe you will come to the assumption that it's not but others will want to overclock anyway.

Yes, overclocking can be done with ease and you do get a nice speed bump on the GTS - though honestly, you have to decide if it's even worth it. If GTS is all you can afford and you want to bump the AA up another level but it runs a little too slow, then do some overclocking. Although, unless you're gaming at levels of 1920 x 1200 and above, stock performance is clearly going to be enough for the time being it on the majority of the latest games.

Let's wait for some new games to be released, such as Crysis or UT2007, and then you'll probably want to overclock as far as you can as these games will be able to stress out the GPU more than the current batch of games.