Toshiba's BG4 is the company's 4th generation ball grid SSD that uses multichip packaging. On the surface, it doesn't sound all that exciting unless you care about the packaging technology that incorporates the controller and the memory together. The BG4 is also a drive you won't likely find on Amazon or Newegg since it's designed for embedded systems like new IoT devices, tablets, and slightly larger systems like Chromebooks. 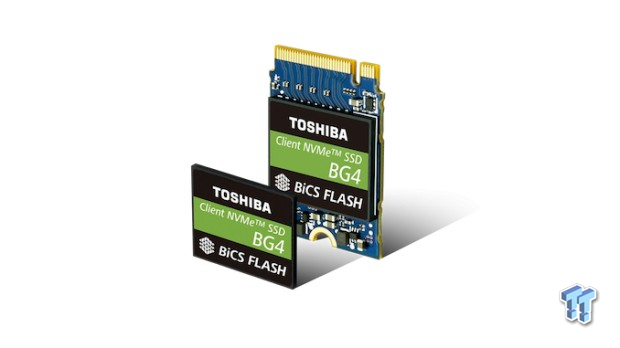 Don't close this browser tab just yet. The BG4 uses Toshiba's latest flash memory technology with an interface speed increase. Controller optimizations to the host also double bandwidth. The result is a futuristic SSD that adds little to the BOM cost and allows for thinner devices while delivering impressive NVMe performance. The BG4 we're testing today is faster than some of the best SSDs released just a year ago.

Do we have your attention now? 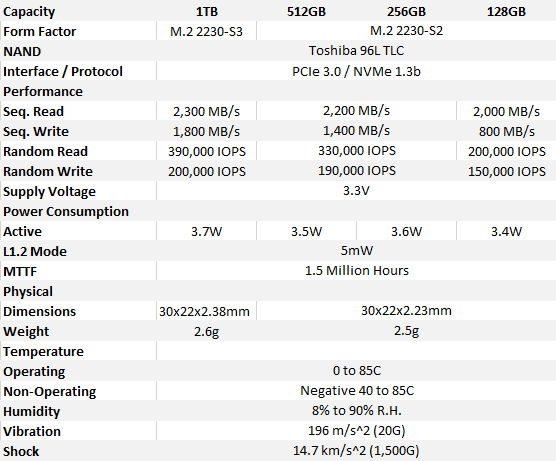 Toshiba will ship the BG4 in four capacities that range from 128GB to 1TB. There are two different form factors. The first is what you will see today with the BGB mounted to an M.2 2230 PCB. The circuit board has some power management functions onboard to convert standard NVMe from PCIe 3.0 to work with the BGA.

The second form factor is the BGA or Ball Grid Array. This form factor is part of the NVMe specification, although not one we talk about often. The BGA has the same controller and flash in the multichip package. The real difference between these two form-factors is one comes mounted to a board making it removable/replaceable, and the other is a surface mount component.

The BG4 is not a retail or channel product, so we don't have specific pricing info. Pricing generally depends on the quantity ordered and terms of the sale, such as warranty coverage. The warranty changes from each company and falls under the device guarantee. One company lay use the BG4 in a notebook with a 2-year warranty, but another BG4 may be in a tablet with a 1-year warranty.

Endurance falls under the same arrangement between Toshiba's sales team and the customer. 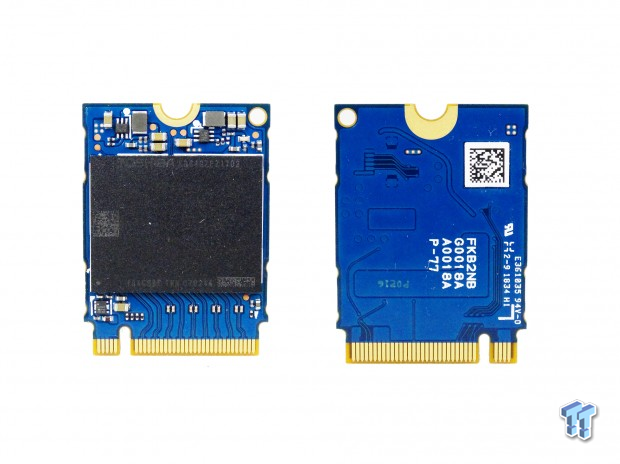 I wish I had a specialized sanding machine used to strip the layers of the die. I would be able to show you something interesting other than a black package sitting on a power delivery circuit with NVMe fingers.

The drive is only 22mm wide and 30mm long. This is a standard form factor although most people outside of the PC industry have seen one up close. 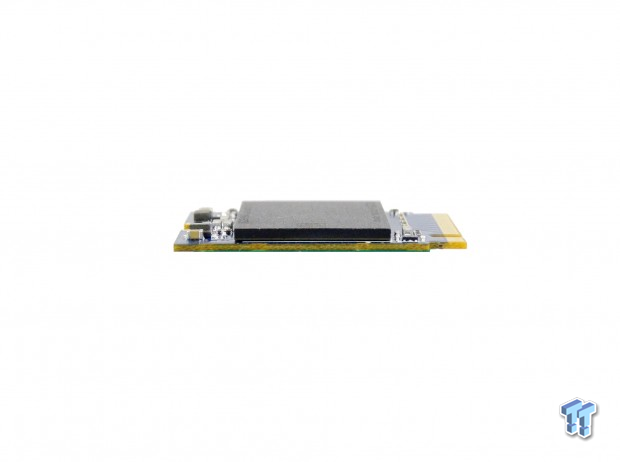 The package is a little taller than some of the others we look at on SSDs. The 1TB model is slightly taller than the other capacities. It's hard to believe there are some companies asking for an even small Z-heights from the storage to make even thinner devices. 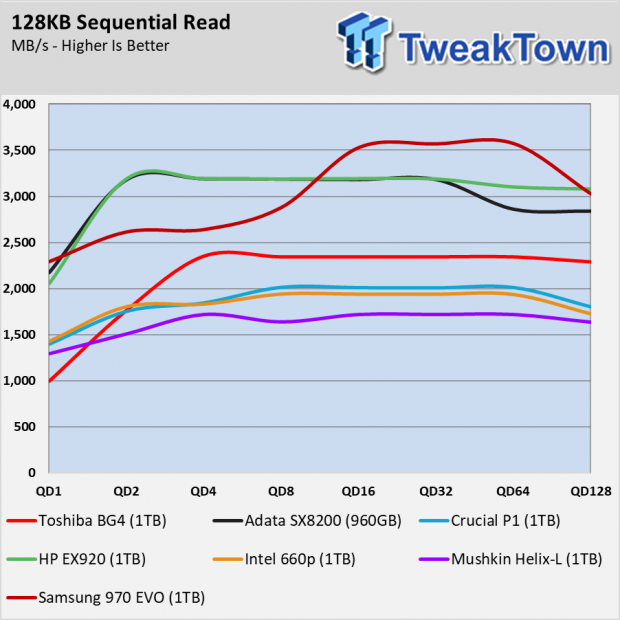 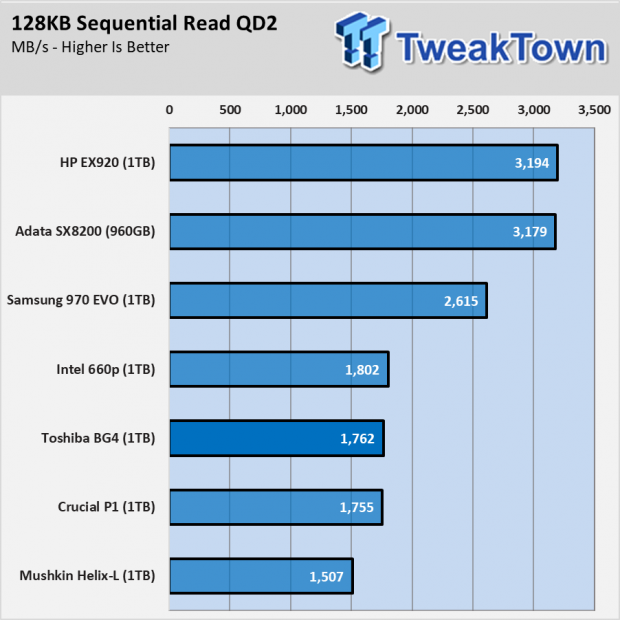 The 1TB BG4 achieves its 2,300 MB/s sequential speed in our test. The drive needs a little lift-off time to get there but manages to meet the spec at queue depth 4 and beyond. This is faster than the Crucial P1, Intel 660p, and Mushkin Helix-L. The Crucial and Intel both use 4-bit per cell flash. The Mushkin is the only other DRAMless SSD in the charts today. 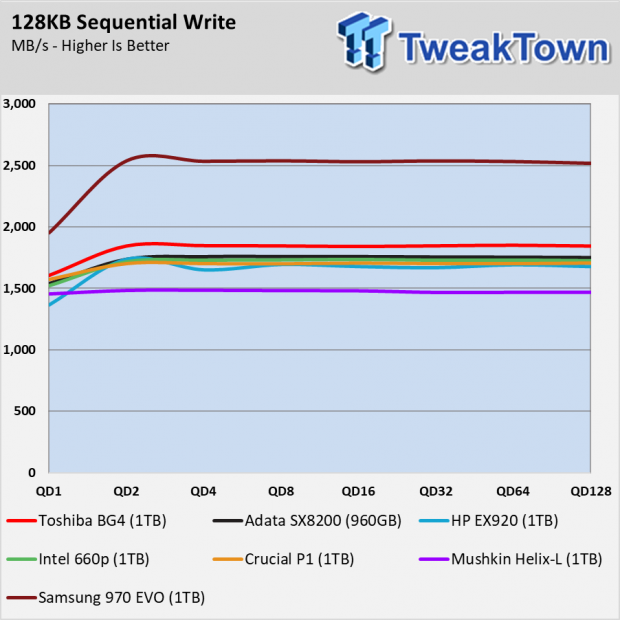 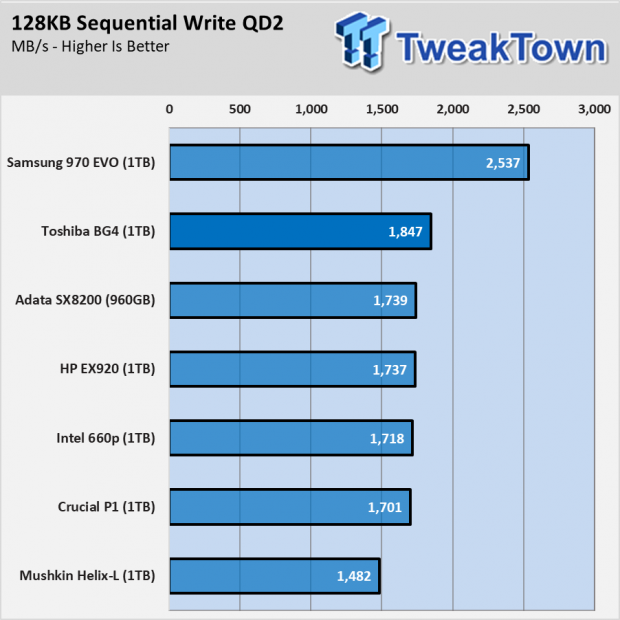 The drive also achieves its 1,800 MB/s sequential write rating, and that's higher than all but the Samsung 970 EVO. The performance is remarkably high for an embedded drive. 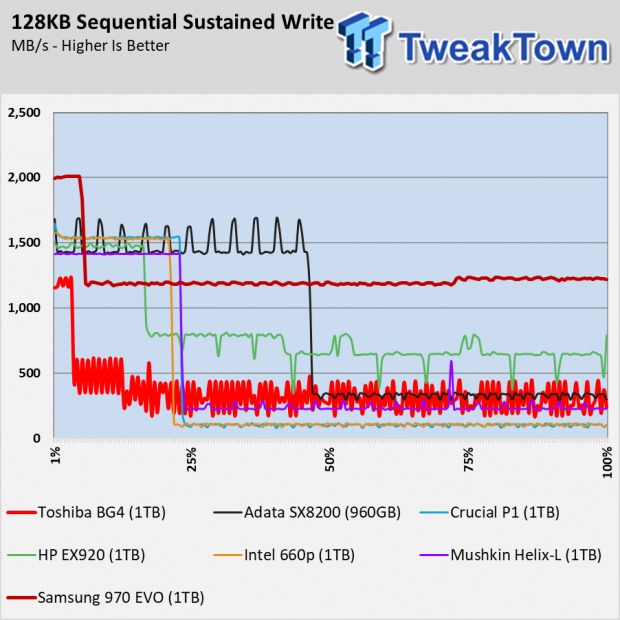 Like the 3- and 4-bit SSDs, the high write performance comes from using pSLC programming to increase burst performance, but the writes don't stay high forever. The BG4 shows a couple of levels of cache. The quick burst that drops into a lower tier before reaching native TLC speeds. The large peaks and valleys on the chart lead us to believe that all data first writes to the SLC buffer before folding into the TLC. This increases endurance, but decreases consistency. 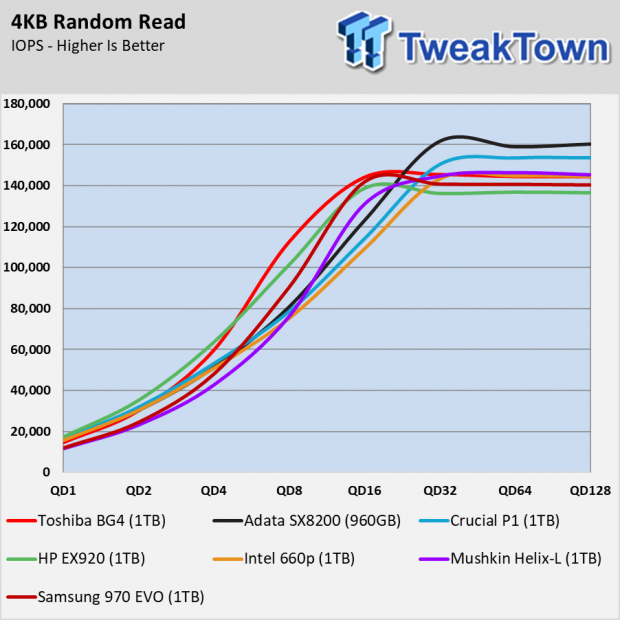 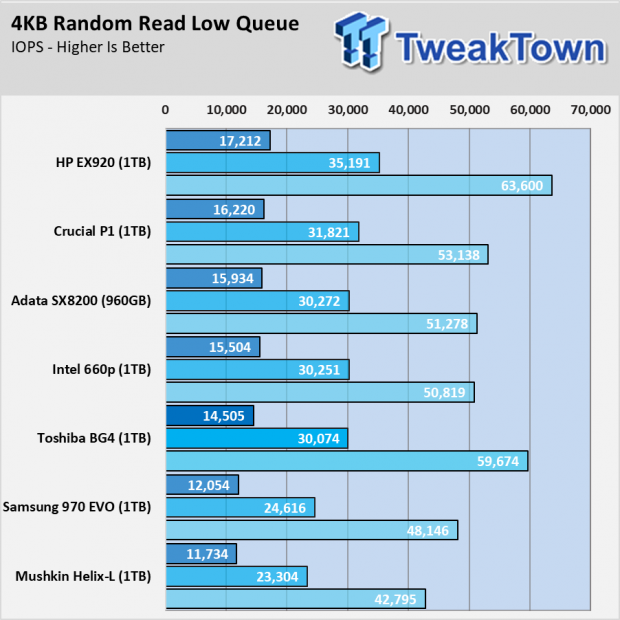 The 1TB Toshiba BG4 delivers over 14,000 random read IOPS at QD1. Anything over 10,000 is really good and makes for a pleasurable user experience. The 14,000 IOPS mark is higher than any other drive we've tested with Toshiba TLC memory to date. 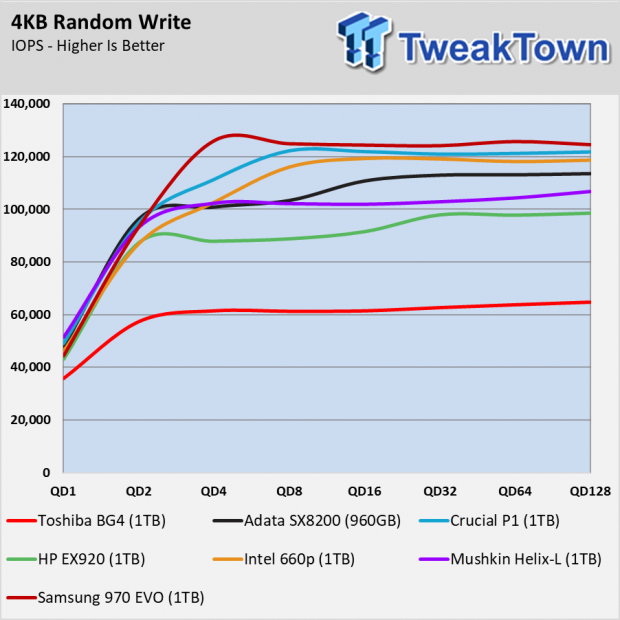 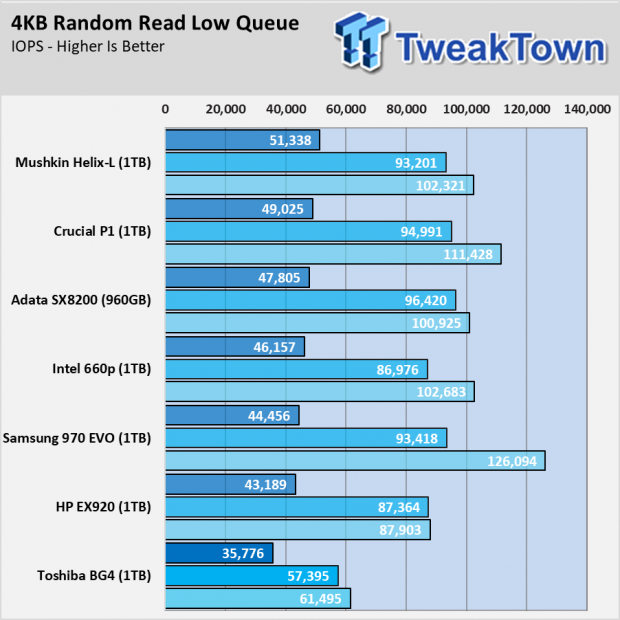 DRAMless SSDs always struggle with random write performance, and the BG4 doesn't break that rule. The drive doesn't trail the others too far at low queue depth where consumer workloads reside. It could be better, but we're not going to complain too much because many decent SATA SSDs struggle to hit these numbers. 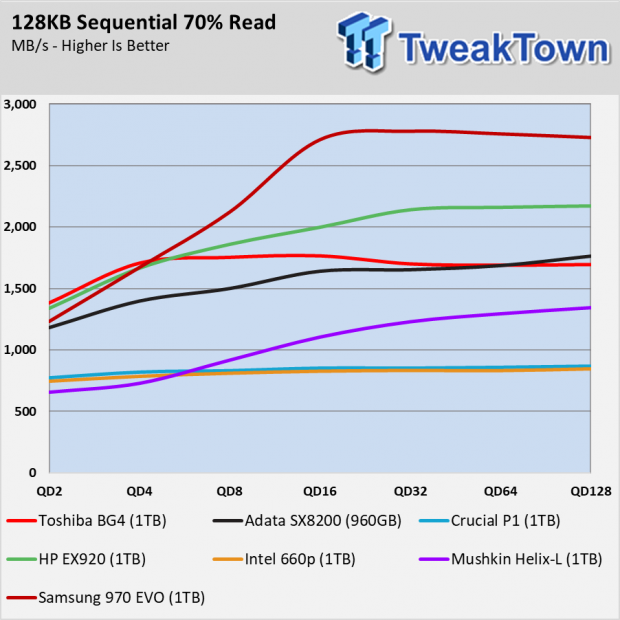 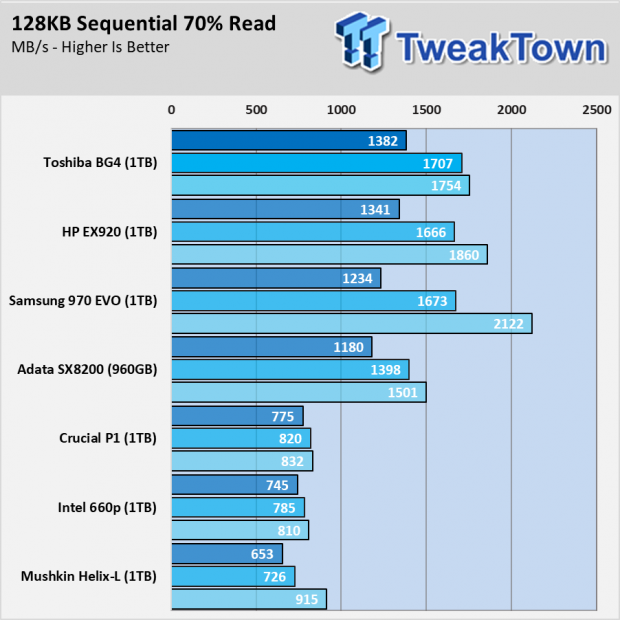 Toshiba has a long history of producing SSDs with strong mixed workload performance. The 1TB BG4 manages to outperform all of the other drives in this test at QD2, the lowest depth we can measure in (because you can't read and write at the same time with a single IO). 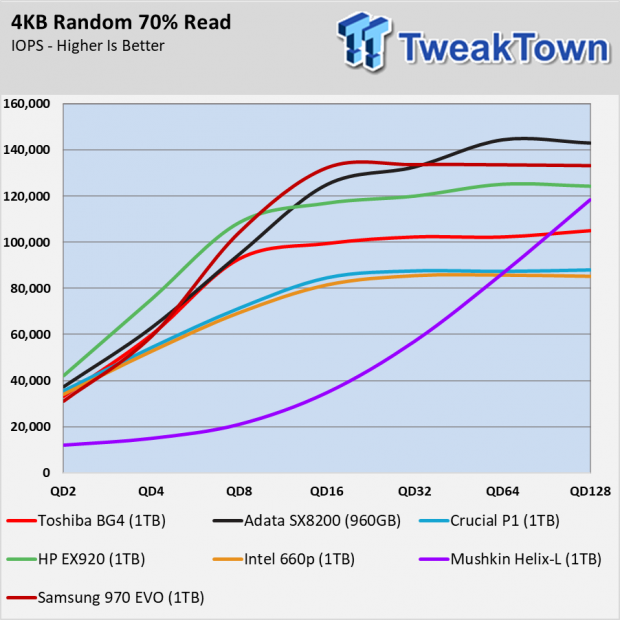 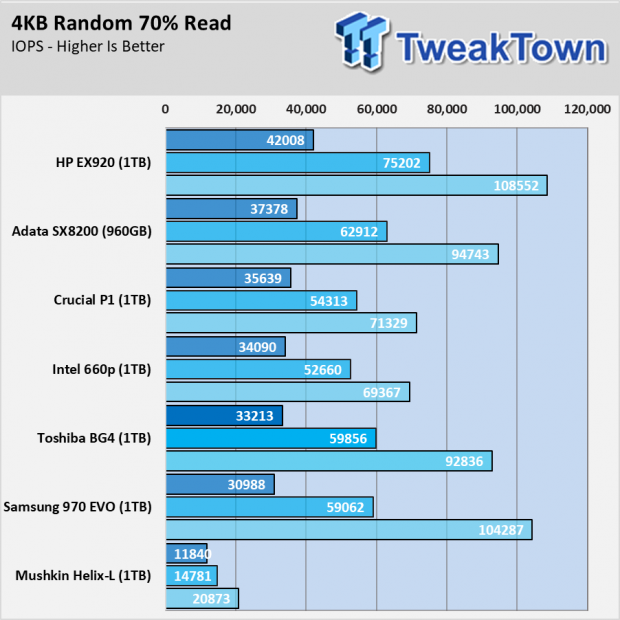 The drive also performs well with random mixed workloads but only manages to score in the middle of the pack of the comparison drives in the chart at QD2. At higher queue depths, the BG4 picks up the pace and becomes more competitive. 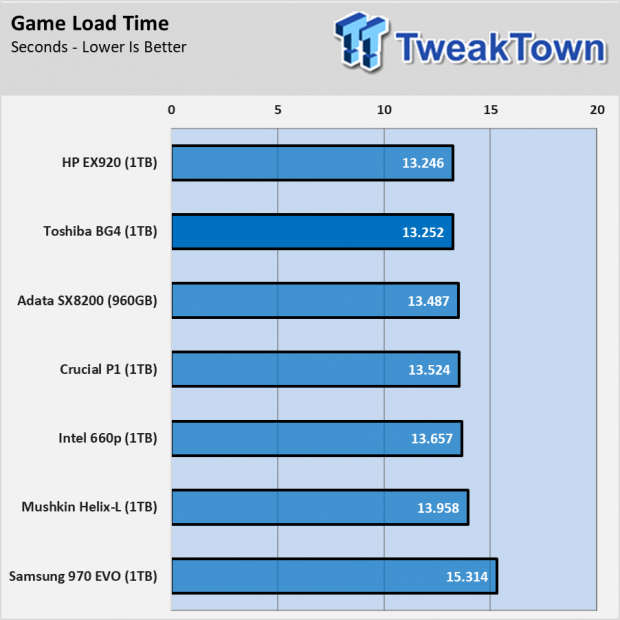 Gaming isn't a difficult workload on its own, but many of our readers care deeply about it. The Toshiba BG4 outperforms many of the popular low-cost SSDs shipping today although the results are very close among this group. 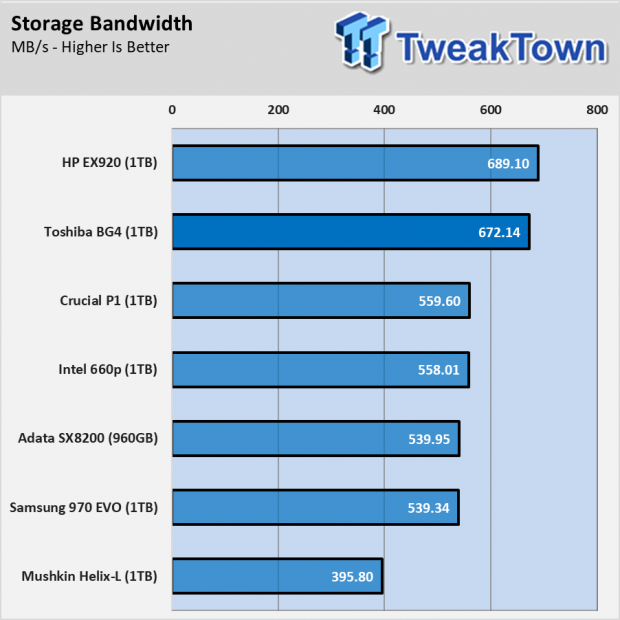 Of all the results, this is the most surprising from the Toshiba BG4. The drive performs remarkably well for it's small size and lack of a DRAM die to cache the flash translation map. It outperforms several big-name NVMe SSDs that we've recommended to uses in the past. 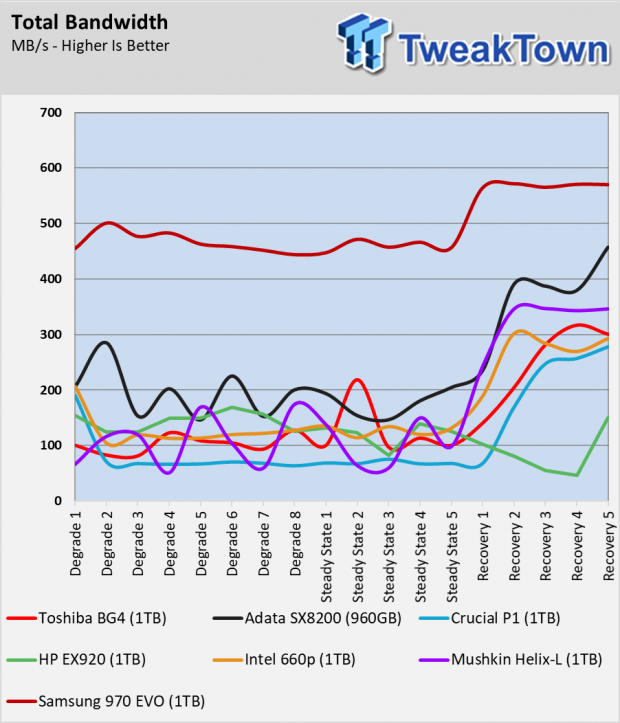 Even with all of the great performance we've measured thus far, the BG4 is still not a good choice for extended workloads. This test shows the drives nearly full and with heavy preconditioning. The BG4 is a pure consumer application drive, but that's not a negative in this context. It performs well in the tasks it Toshiba designed it for. 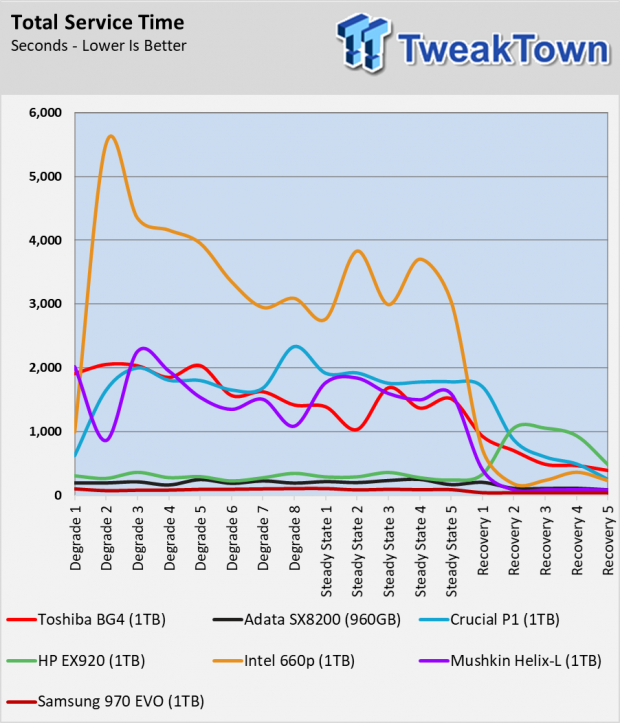 The Service Time Test shows how long each drive worked to complete the tasks. We rarely show this chart except to take a deeper look at DRAMless and 4-bit per cell SSDs. The DRAMless drives often take longer to recover after heavy workloads. That holds true with the Toshiba BG4. It simply takes longer for the drive to process the background activities that cleans flash cells to get performance back into an optimal state. 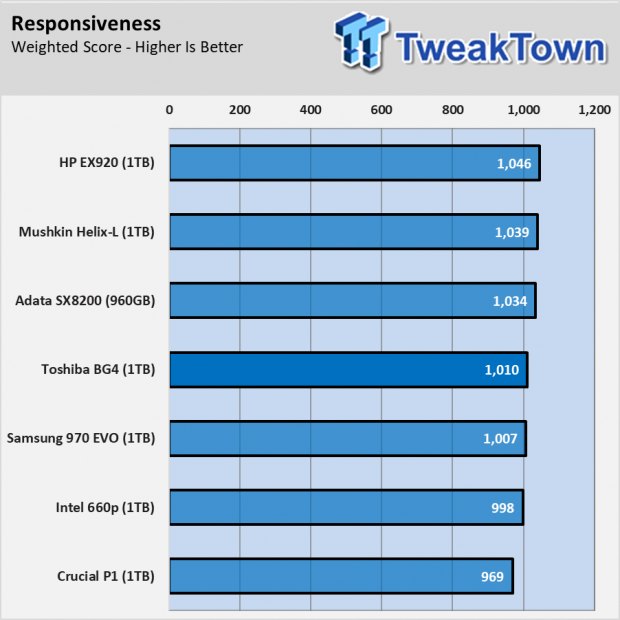 We look favorably on any drive that scores over 1000 points in the System Responsiveness Test. This is part of the BAPCo SYSmark 2014 SE suite. The weighted scores use an OEM version of the Samsung 850 EVO for the base score of 1,000. The 850 EVO delivers strong system responsiveness, what makes your PC feel fast, even though it's an older model.

The 1TB BG4 outperforms the base score by an additional 10 points and manages to reach the middle point in the chart against drives we thought would deliver superior performance. 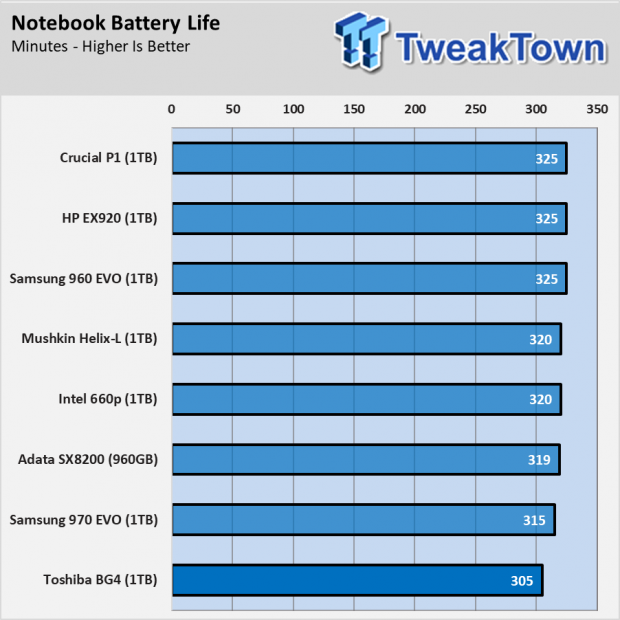 The MobileMark 2012 notebook battery-life test will be slightly misleading in two ways. The first is our test system uses a Lenovo Y700-17 gaming notebook designed for high frames per second and not on the go battery life.

The other issue is one that can't don't have any control over. When a company, say Dell for this explanation, orders a drive like the BG4, the company has Toshiba build custom firmware. Dell may go back to Toshiba after testing the reference design (like the one we have today). The company can ask for a cap on random performance, or a change to how quickly the drive performs garbage collection after a data write. Both of these would increase notebook battery life without a noticeable impact to performance.

The overall picture becomes less clean when one system integrator, like Dell, ask for one change and another company, like Lenovo or HP, asks for something different.

Did you expect to see a DRAMless, actually a BGA DRAMless, SSD perform as well as the new Toshiba BG4?

To be honest, I didn't. After looking at the results, I went back to see the specifications and the notes from a briefing from nearly a year ago. I was convinced Toshiba changed the build and added a DRAM die in the package. We can confirm the BG4 is still a DRAMless design.

The drive is very quick for what it is, and most users would have a difficult time justifying upgrading a notebook with this drive inside. That's very high praise for any OEM-style SSD. Sadly, at this time, Toshiba doesn't have any plans to bring this drive to market as an upgrade product sold through retail channels. In the future, the drive may come to market, likely under the RC200 name like the BG3. Clearly, the BG4 would be a more competitive product with the new PCIe 3.0 x4 interface compared to the RC100 with only two PCIe lanes.