There is currently just over 7 billion Internet of Things (IoT) connected devices in the world, according to IoT Analytics. Current projects show that number will leap to a staggering 22 billion by 2025 and become a 1 trillion Dollar market well before then. 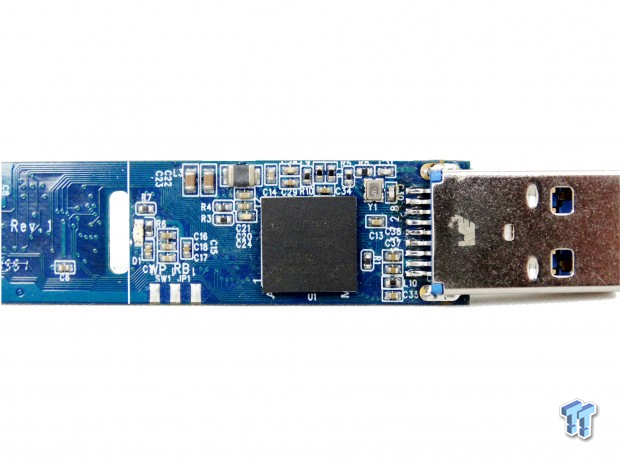 Along with the market-growth comes increased capabilities from smarter devices. The industry calls this edge processing, and it's the device sorting through the massive amounts of data before sending the relevant portions to users or the cloud. The processing of live data increases storage demands while manufacturers push for lower-cost and lower-power components to make the magic happen.

Hyperstone specializes in reliable flash memory controllers for demanding environments. The company's U9 NAND flash controller is a turnkey product for industrial and robust environments where high endurance is a requirement. The controller utilizes the common USB 3.1 SuperSpeed 5Gbps interface for both low-cost integration and enough performance for on-device processing.

Hyperstone chose to build a well-rounded solution that sips just 300mW when active and delivers up to 3,000 IOPS read and 1,000 IOPS write in steady-state using commodity NAND flash. 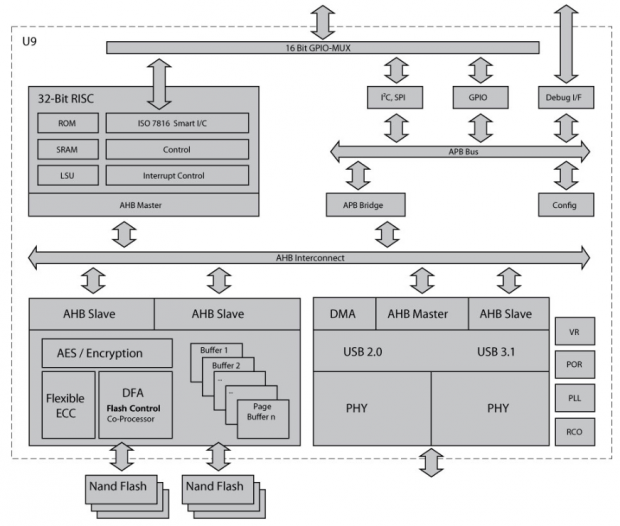 Hyperstone based the U9 on their E1 microprocessor core with a 32-bit RISC architecture. The chip supports two flash channels with up to eight chip selects on two bus channels. The 124-TFBGA design measures just 9mm x 9mm.

The controller utilizes two additional co-processors that allows direct flash access to relieve the RISC core from additional overheard associated with data transfer tasks. The on-chip hardware ECC and CRC unit produces the code bytes for error detection and correction in the read and write processes.

The U9 works with a wide spectrum of Flashes including current 3D Flashes. Future updates will enable new Flashes as they become available. 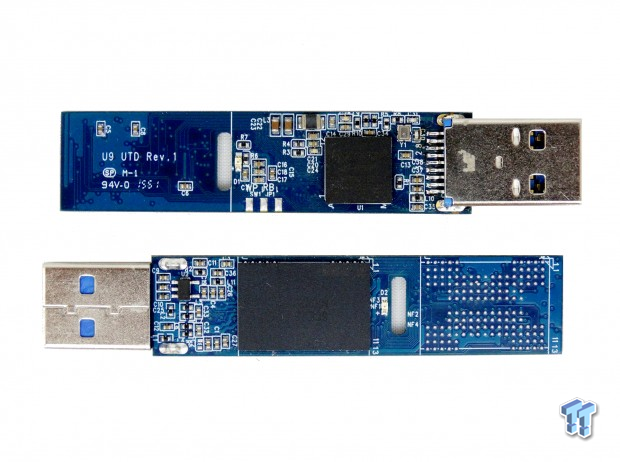 The U9 incorporates several functions in the die, like power regulation, so the design requires less surface mount components that add to R&D and material costs.

We tested two Hyperstone models against a number of off-the-shelf USB flash drives with and without an onboard DRAM buffer. The first U9 tested uses pSLC programming with 2-bit per cell (MLC) flash. The second U9 just uses MLC flash without the pSLC-programmed cache. 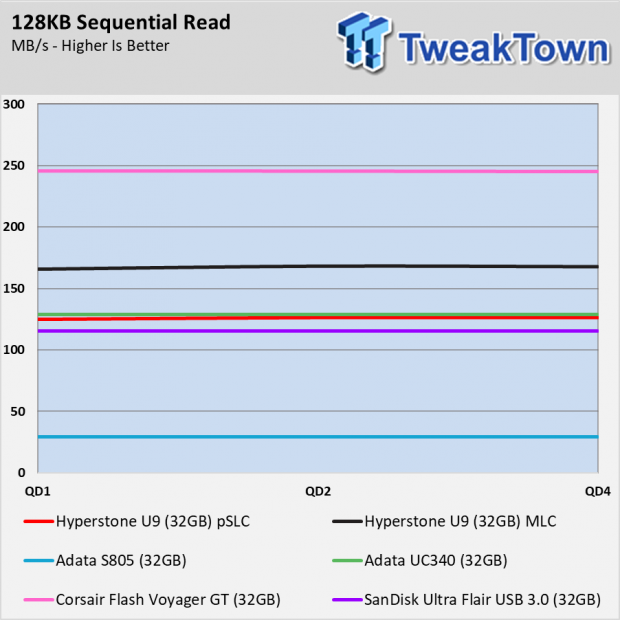 The performance is flat with all of the drives as we increase the load through queue depth for all of the drives. The Hyperstone U9 with pSLC programming trails the model without the cache programming in sequential reads in our testing but will have a large advantage writing data.

The Corsair Force GT leads this group in sequential read performance. The drive has been a favorite with performance enthusiasts for several years and has a strong reputation for portable storage. It uses a DRAM buffer to lead this test, but this will be the only one where it sits at the top. 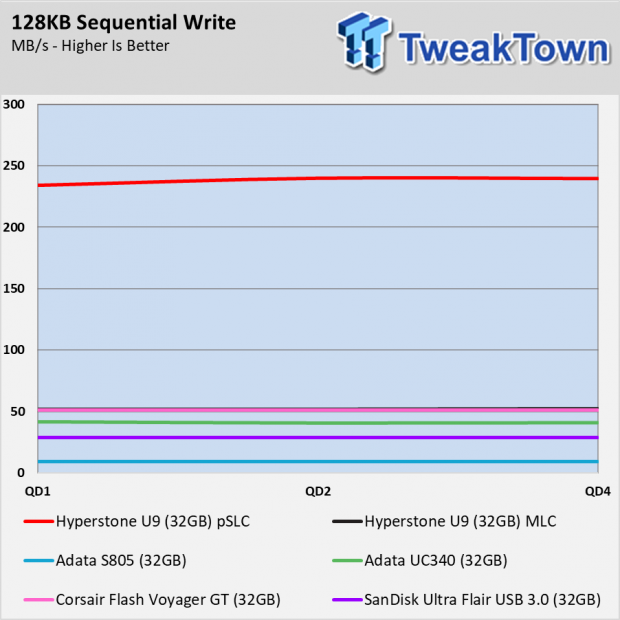 The pSLC programming on the more advanced Hyperstone allows it to charge past the other products in our sequential write test. Again we don't see much performance variation as we scale the queue depth with any of the drives.

The Hyperstone writing data in two bits per cell delivers nearly identical performance to the Corsair Force GT with a DRAM buffer. This is quite an accomplishment given the memory restrictions for the Hyperstone. The drive is able to make up the performance gap through superior firmware and a streamlined data path. 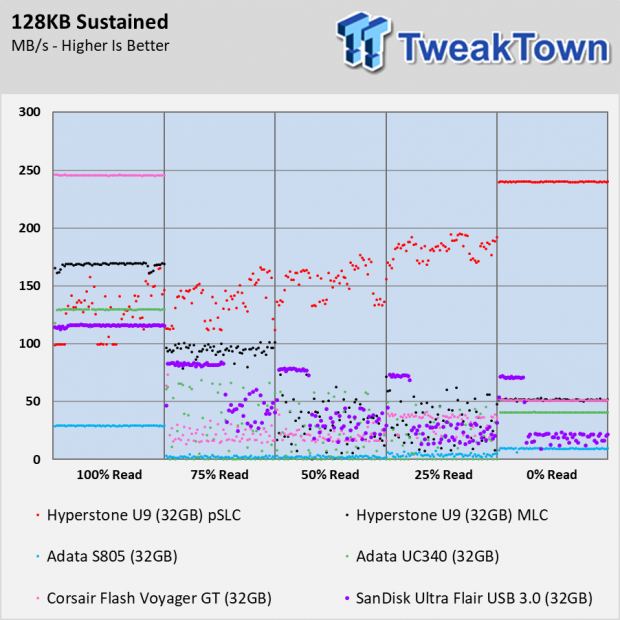 In this test, we focus on the mixed workloads, where both data reads and writes exist. This is closer to the way these products work in IoT devices since the parts are the only data storage component in the system.

The Hyperstone drive with pSLC shows strong performance in the three mixed workload tests and outperforms the other products by a sizable margin.

The MLC, only Hyperstone, also performs well. This model often outperforms other USB drives with a DRAM buffer in every mix.

Both Hyperstone drives show very impressive results in writing sequential data. The performance in this area is laser-like consistent, and for many applications, this is very important. One of the most demanding areas that require sequential write consistency is in video applications like dash and other video cameras. Inconsistent performance forces cameras to drop frames and even lock up the device altogether. 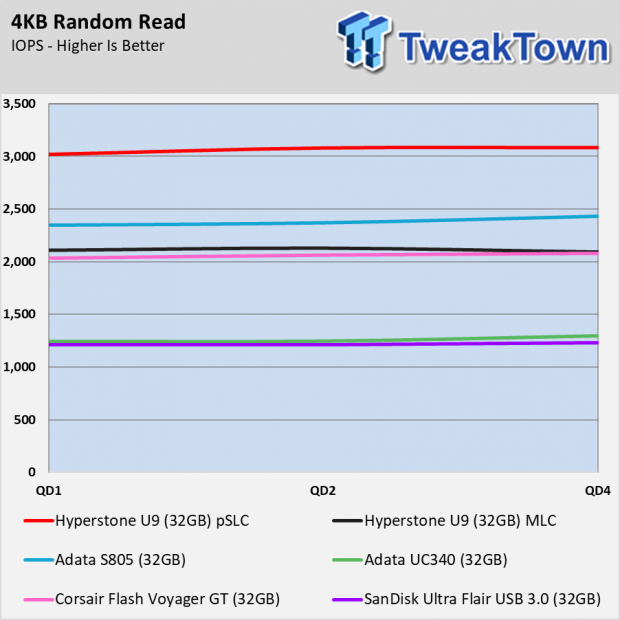 Industrial and other IoT type devices generally see long streams of random data that's collected, processed and often sent to the cloud. Random data is much harder on flash memory due to the read, modify, and write program cadence. We eight non-Hyperstone drives for this article but only half survived testing. The other four prematurely expired during the random write or applications tests.

The Hyperstone drives really stand out in the random performance tests. The pSLC drive stands above all others in our random read test using 4KB data. The non-pSLC model even outperforms the Flash Voyager GT with a DRAM buffer in this test. 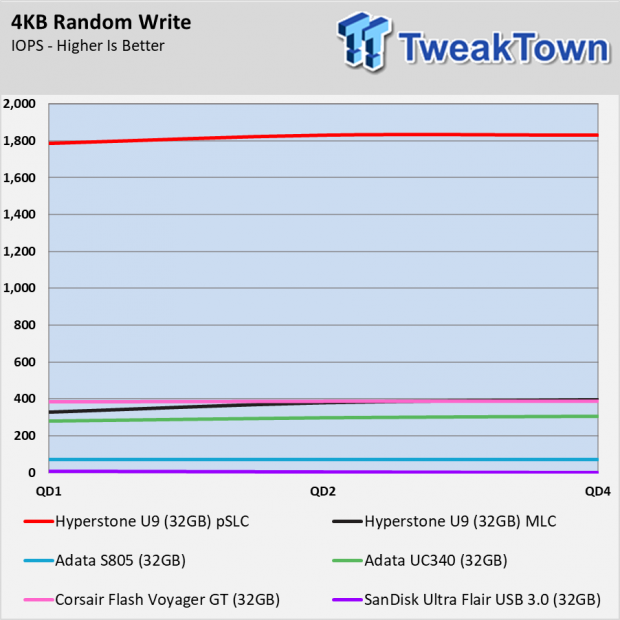 The Hyperstone pSLC drive really stands out in the random write test where it laps the rest of the field at all queue depths. Again, we see the non-pSLC Hyperstone drive compete with the Corsair drive with the DRAM buffer. 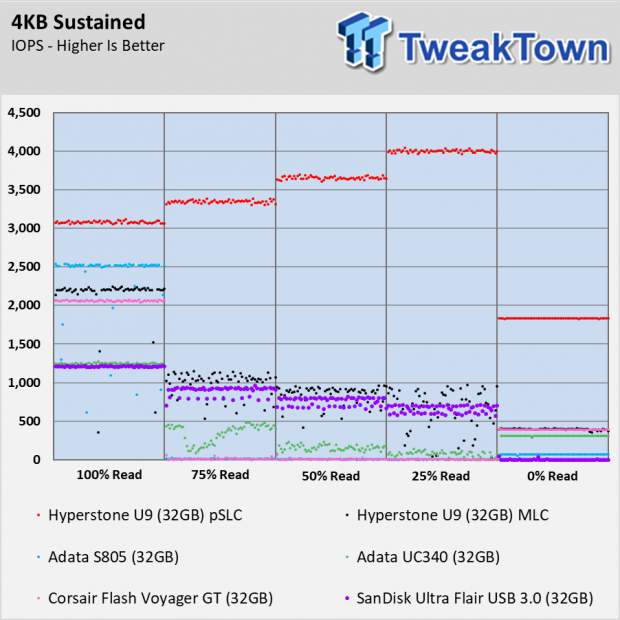 The last synthetic test mixes random reads and writes at different weights. The random mixed tests are very similar to what your data logging IoT device faces in use. The two ADATA and single Corsair drives fall flat here with the IO pinned to the bottom of the chart. Over large portions of the test, those drives don't even register a single IO for several seconds. The SanDisk Ultra Flair USB 3.0 looks like it does better but can't sustain a 100% write random workload.

Neither of the Hyperstone drives failed to register an IO in our test. The pSLC-enabled model seemed to accelerate with the random mixed portions of the test with a gradual increase from 100% reads to 25% reads with IOPS between 3,100 and 4,000. The most impressive part of these results is the consistency of the IO. The non-pSLC Hyperstone drive also delivers impressive results in the random mixed test. This drive favors less writes from the host device, making it ideal for industrial applications with less data logging.

We grabbed a handful of common user applications to run storage-focused tests on the five devices that survived our synthetic testing. The applications tests come from the UL PCMark 8 suite and measure the amount of time it takes to complete simple and complex tasks. The final chart on this page shows the combined results from the individual tests with a single throughput score that is easy to compare. 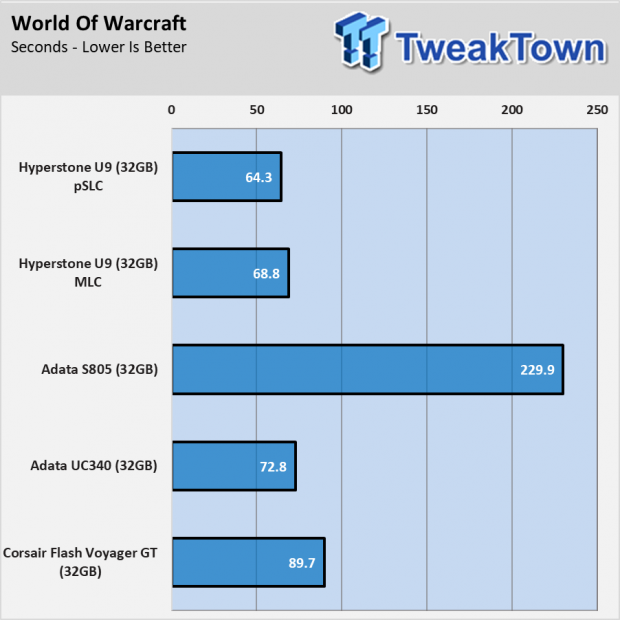 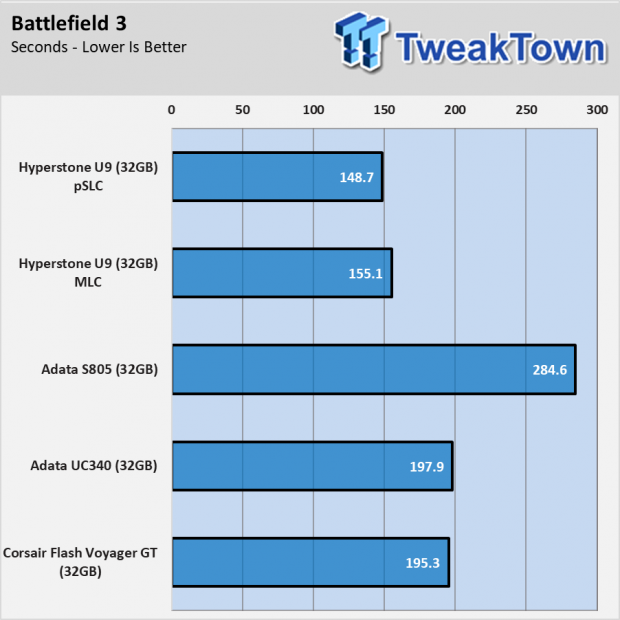 At first, you may not think of gaming as a relevant use case for the Hyperstone U9, but many of these drives find homes in casino gaming. In Las Vegas, you will see the gaming machines playing videos and moving through complex lighting patterns. Under the surface, these machines record video and log player data. The IO mix is similar to consumer gaming applications like used in these two tests. 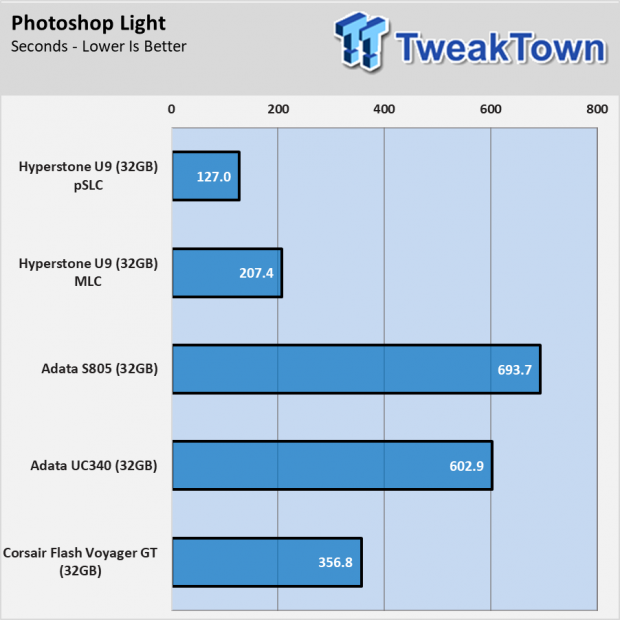 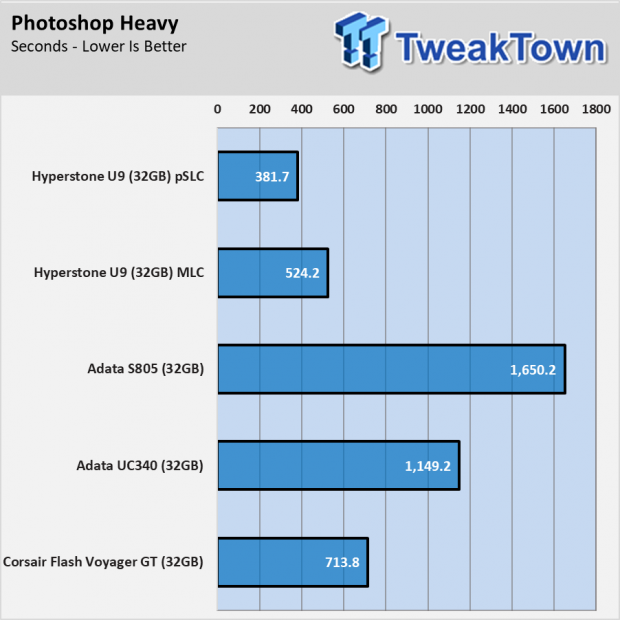 Photoshop reads in large sequential data blocks, but the manipulations in the images push the IO in different directions, including random reads and writes. The two Hyperstone drives breeze through the two Photoshop workloads with ease. 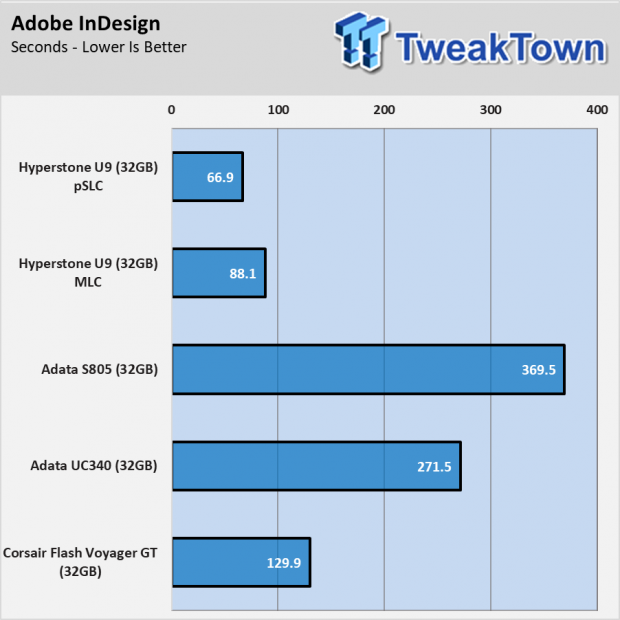 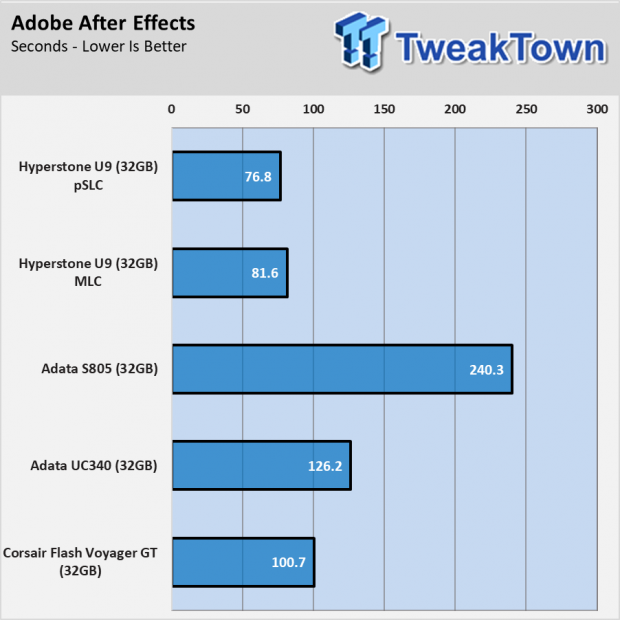 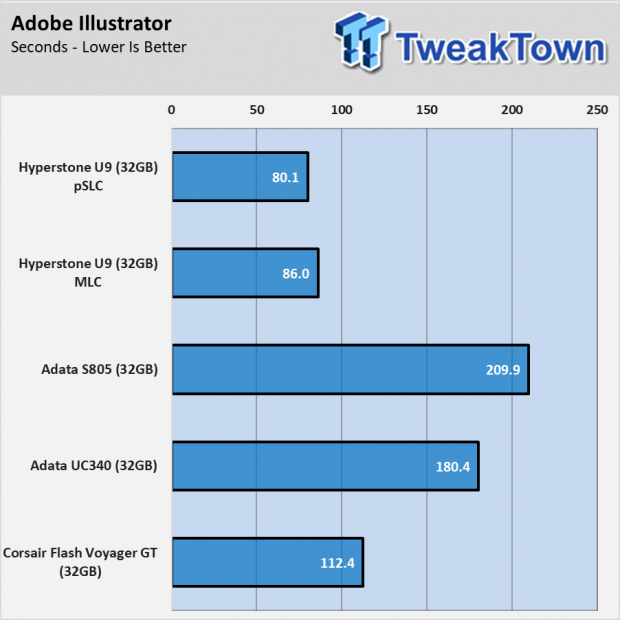 These three tests are somewhat repetitive. The important takeaway in this series is how much faster the two Hyperstone drives complete the workloads compared to the consumer-grade products. 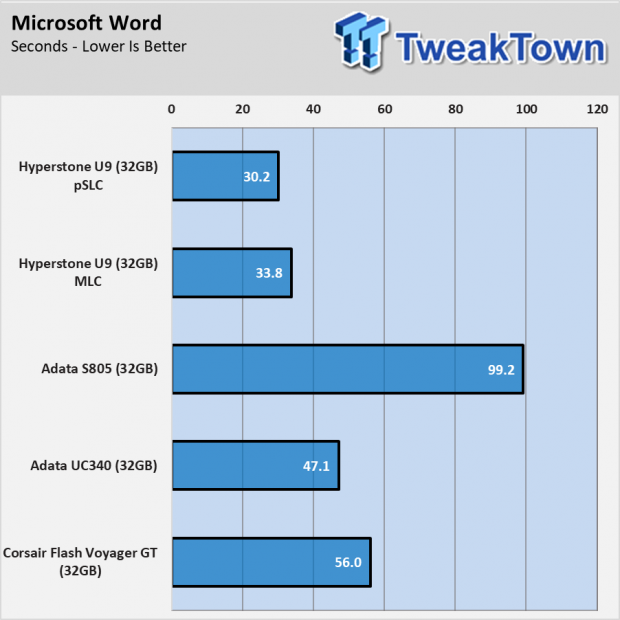 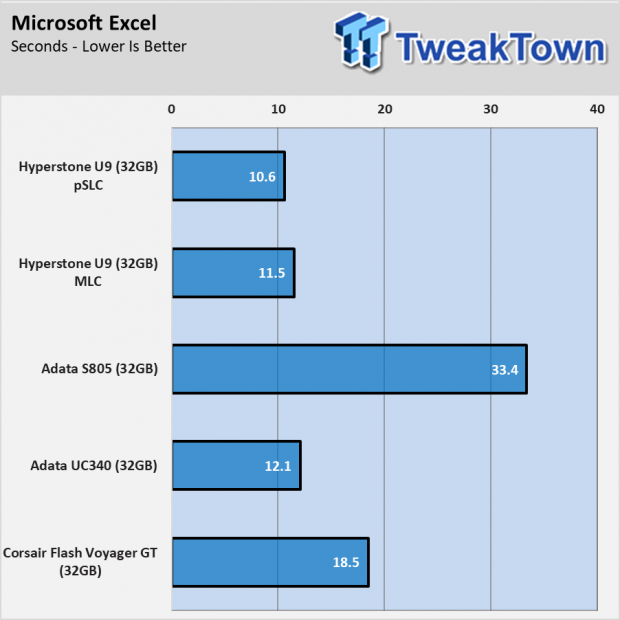 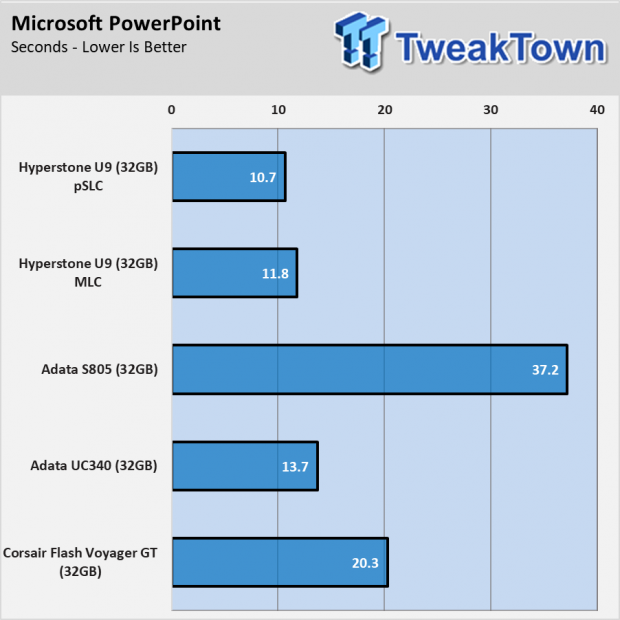 The three Microsoft tests are much lighter than the Adobe tests, so they don't provide a lot of insight into industrial use. These tests do show performance in office environments. The U9's advanced encryption, error correction capabilities, and high random performance open the door for enterprise Windows To Go use. 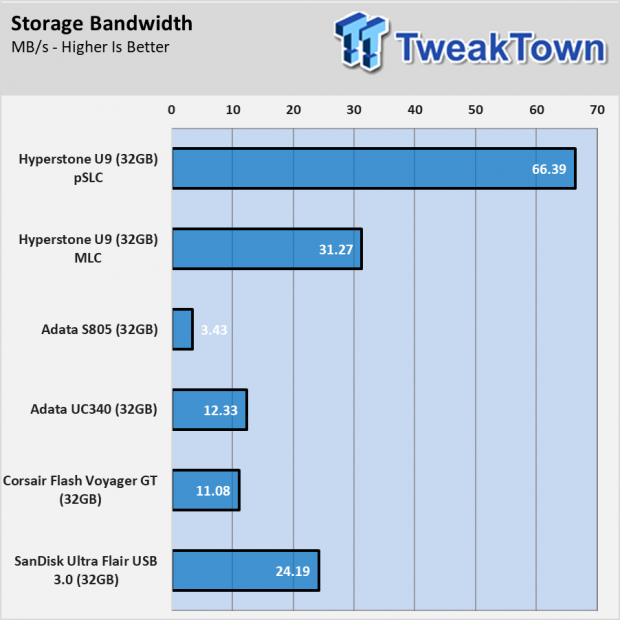 The total storage bandwidth chart averages the throughput of the other tests on this page. The Hyperstone U9 programmed with pSLC walks away from all of the other products and delivers the highest throughput for any native USB drive we've tested. The MLC model delivers around half the performance in Windows applications.

In coming weeks, we will cover Flash Memory Summit and find several new products targeting the industrial and IoT markets. We expect to see a number of those using the Hyperstone U9. One such product is the previously announced Micron eU500 featuring an industrial-focused design. The eU500 sports impressive performance in a slim form factor that device manufacturers can quickly integrate in systems that must survive harsh environments. 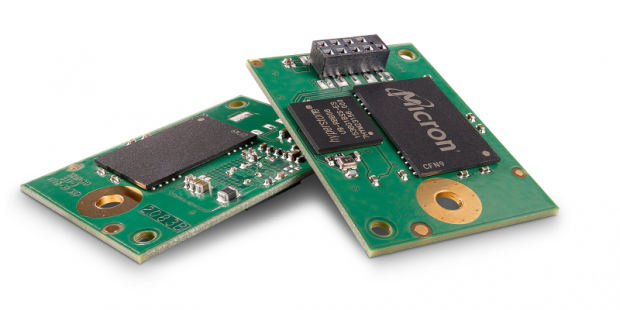 We were not able to test the strongest feature of the Hyperstone U9 today. That feature is the error correction with the 96-bit / 1K BCH ECC engine. The ability to run AES 128 and 256-bit encryption in hardware is significant for the recommended usage of this controller.

Of all the information Hyperstone provided us, the flash management is the most impressive. We noticed in testing the ability to withstand heavy workloads while still delivering consistent performance. That is a rare feature in DRAMless designs and much less so on any device running over the Universal Series Bus. The U9 shows strong background management capabilities that allows the pSLC model to even rival SATA SSDs in sustained random workloads.