Seagate has officially moved past internal SSDs for consumers with the introduction of the company's first portable SSD. This drive joins a crowded field of products from companies flush with flash memory and looking for new outlets to gain market share. 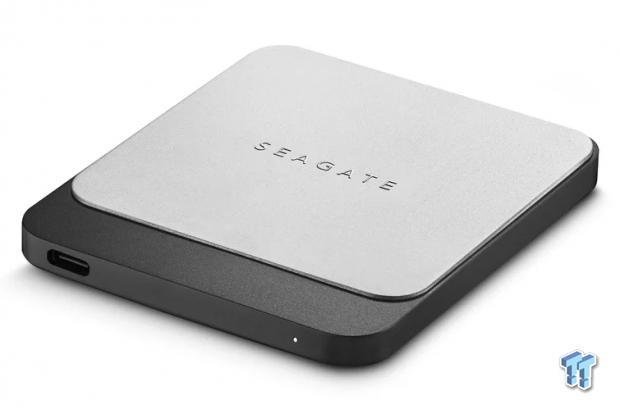 Seagate didn't leave anything off the table when naming the new Fast SSD. Everything they wanted shoppers to know is right into the name. This is supposed to be a fast SSD, but there is a bit more to the story.

The Fast SSD is a portable model that uses the new Type-C connector to keep the design very thin. Inside it uses a Phison PS5010-S10 SATA controller paired with Toshiba 3D flash memory. The S10 controller is a powerhouse when it comes to writing data. In our previous reviews of internal PC products, the controller frequently wrote data at 560 MB/s making it faster than any other SATA SSDs at this task.

Due to the flash shortage we've finally recovered from, very few companies offered the S10 in portable devices. This is an 8-channel enthusiast controller, but an older design. Many shoppers have shifted focus to new NVMe SSDs for desktop and notebook use, but there is still life for the S10 and Seagate may have found the best use for it at this time.

The Fast SSD comes to market in four capacities that range from 250GB to 2TB. The series uses a healthy dose of overprovisioning to keep performance consistent and the drive operating at a high level.

The drives use a USB-to-SATA bridge to deliver up to 540 MB/s sequential read and 500 MB/s sequential write speeds. On the host side, the Fast SSD features a USB 3.1 Gen 2 that allows Seagate to get the last 40 MB/s out of the USB bus (USB 3.1 Gen 1 is only 5Gbps or around 500 MB/s). On the other side of the bridge where the SSD connects, is where the Phison S10 SATA 6Gbps controller fits in.

The Fast SSD isn't a full ruggedized design but being flash-based, it automatically crosses over into the rugged space as far as drops are concerned.

The drive design features equal parts performance and style. It's a drive you can use every day either in the office or on the go. The Fast SSD ships with two cables for maximum compatibility with older USB Type-A and newer Type-C systems.

With four capacities in this product series, the prices range quite a bit. The 250GB Fast SSD starts at just $87.99 at Amazon. The 500GB model is a better value at $109.99. Pricing starts to scale a bit faster with the 1TB drove that sells for $227.99 and the 2TB, the largest in the series, sells for $419.99. We recorded pricing at the time of writing but expect some changes, as we get closer to the holiday shopping season.

Seagate covers the Fast SSD series with a standard 3-year warranty. We didn't find any endurance limitations in the warranty fine print or on Seagate's website. 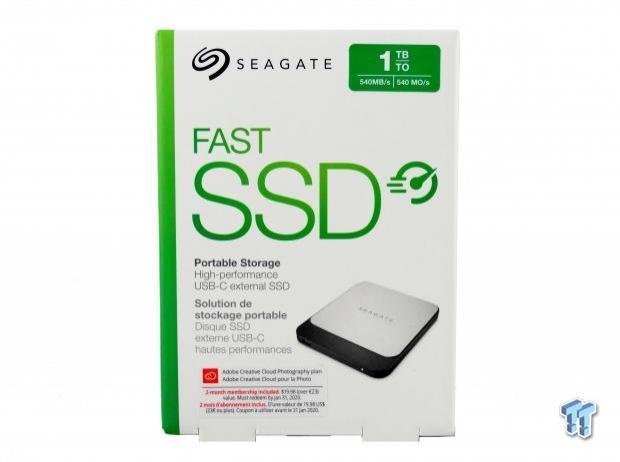 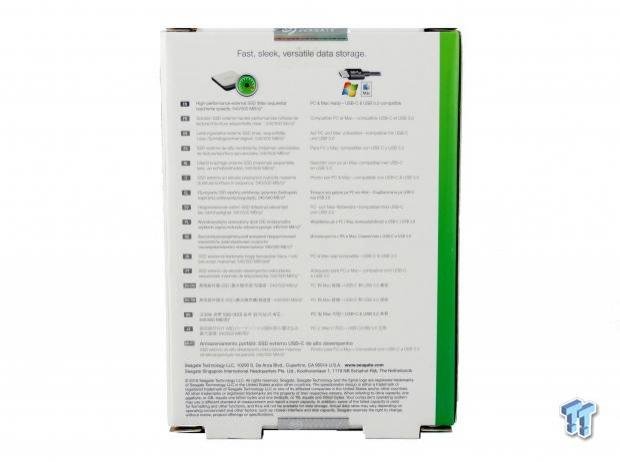 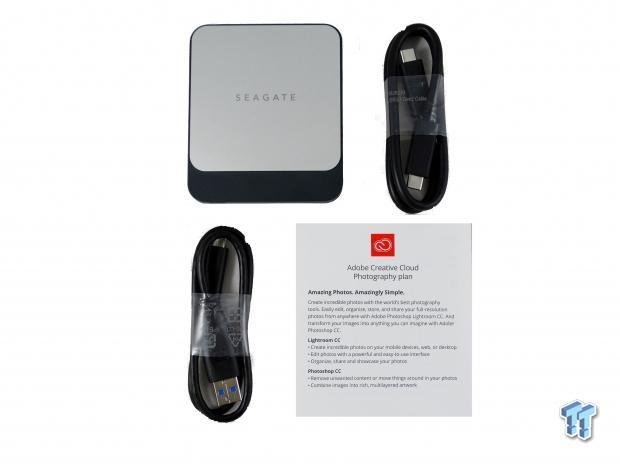 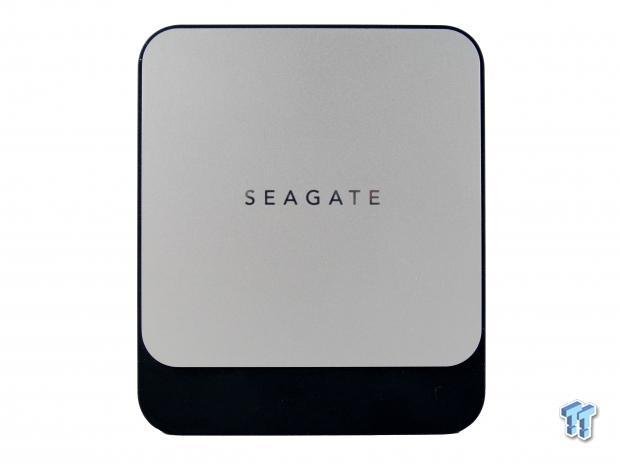 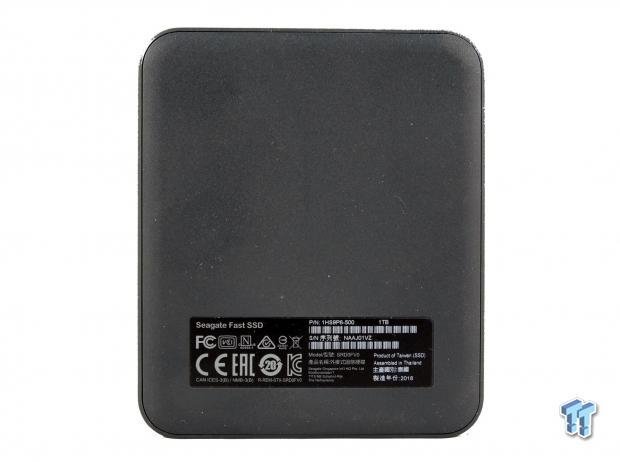 Seagate put together a nice retail-friendly package for the Fast SSD. The front package shows an image of the drive and talks about the two-month Adobe Creative Cloud Photography membership included with the drive. On the back, two messages dominate the space, the performance and the USB 3.0 with Type-C connector.

Inside we found the two cables that maximize compatibility with legacy USB and the Type-C connectors shipping on new systems. There is also a pamphlet on how to activate your two-month subscription to Adobe Creative Cloud Photography.

The drive itself is a stylish design. The Type-C connector on the drive allowed Seagate to design the Fast SSD thinner than several other products on the market today. It's small enough to travel comfortably in your pocket. 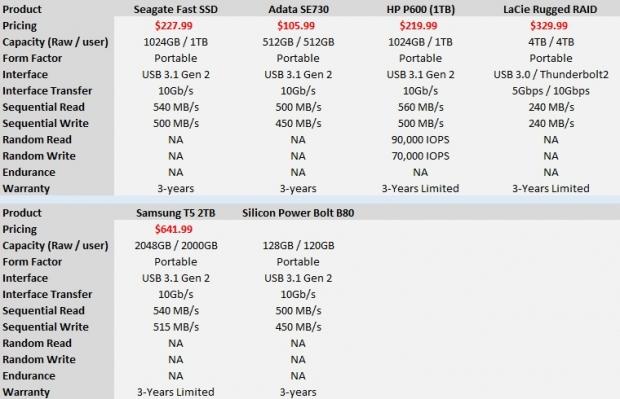 We use a diverse mix of products to compare to new USB portable SSDs. The LaCie Rugged RAID with both USB and Thunderbolt 2 connectivity is the farthest removed from the others. Rugged RAID uses two 2TB hard disk drives in RAID 0 and it likely the best portable HDD and the closest one to flash-based products.

The Adata SE730 was a popular portable SSD in late 2017. It's compact size and speedy USB 3.1 Gen 2 interface encapsulated what the market was like just prior to 3D flash taking over. The HP P600 and Silicon Bolt B80 are both newer designs and represent the market today. The Samsung T5 is the best-selling portable SSD series shipping today. 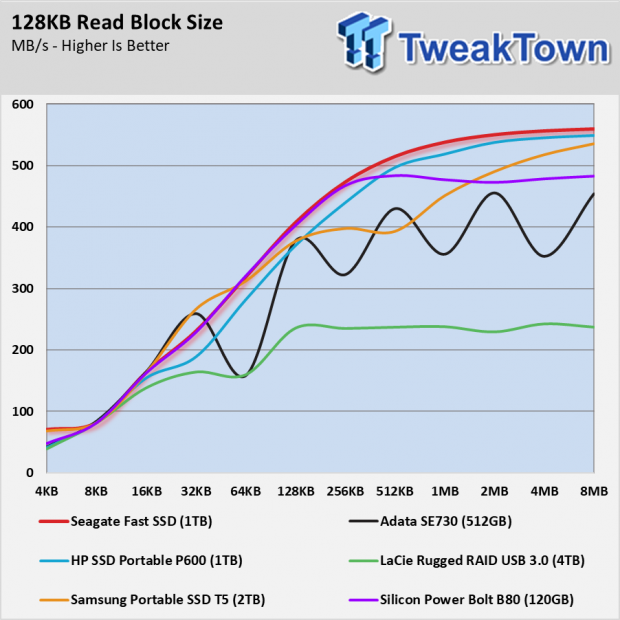 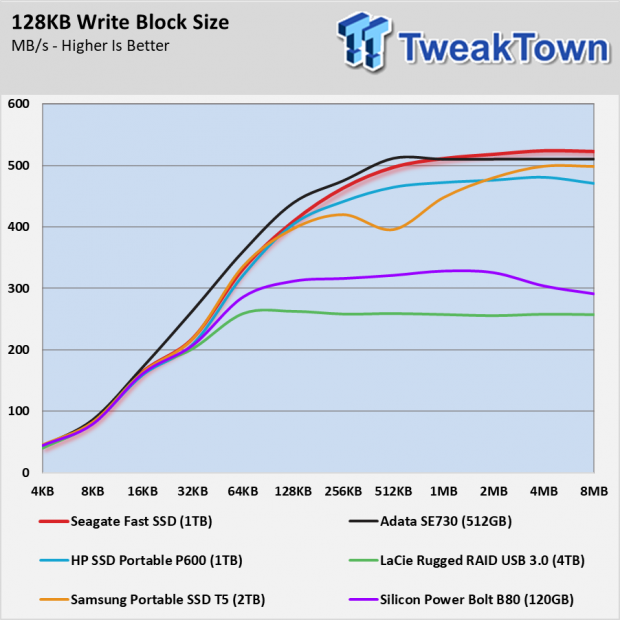 Our first write test with the Seagate Fast SSD didn't go very well. Right out of the box the drive was painfully slow. I'm not sure if Seagate ran a torture test on the drive before shipping or if it was some other issue. After formatting the drive, the performance moved to expected levels, what you see in the review today. 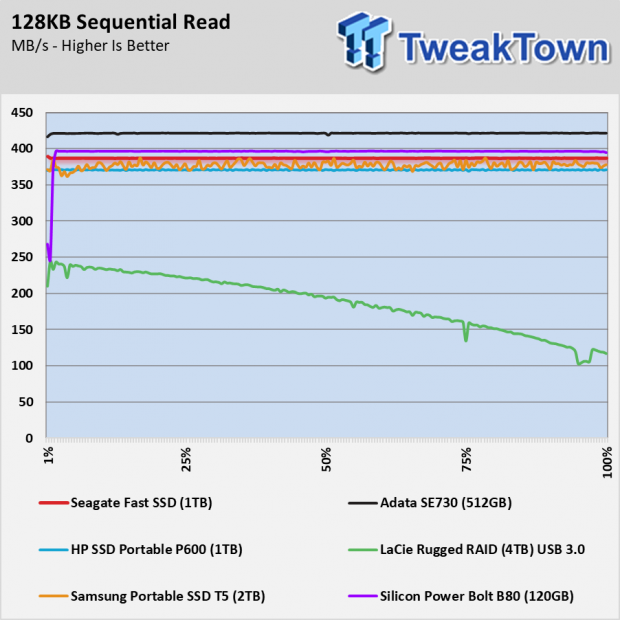 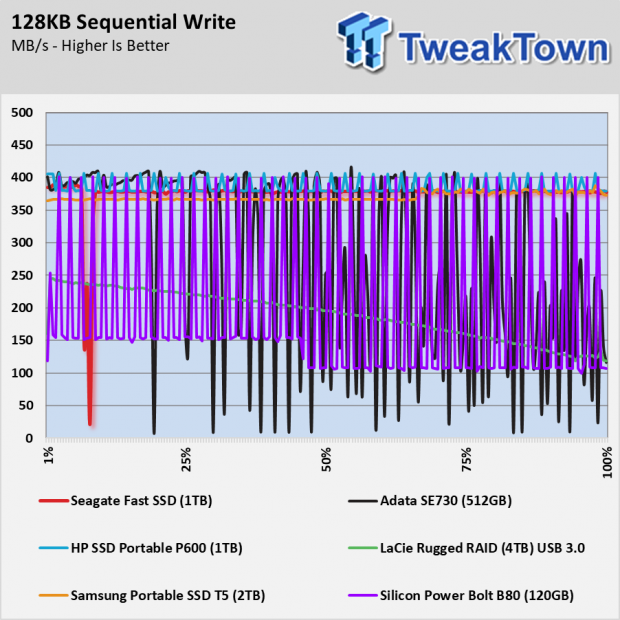 Reading data across the full user space is remarkably smooth. The Fast SSD trails the Adata SE730 and Silicon Power Bolt B80 but the margins are so close users wouldn't notice in under normal use. If you are a Seagate fan and that carries over to the LaCie brand that Seagate owns, you will notice how much faster the Fast SSD is on the same chart with the Rugged RAID.

In the sequential write test, we again see smooth performance with the Fast SSD. The drive had a strong dip right around the 10% mark but it quickly recovered and resumed smooth write operations. 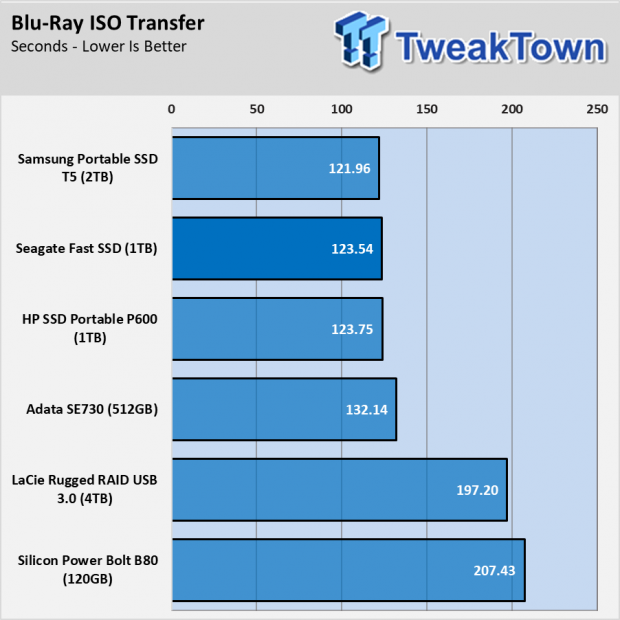 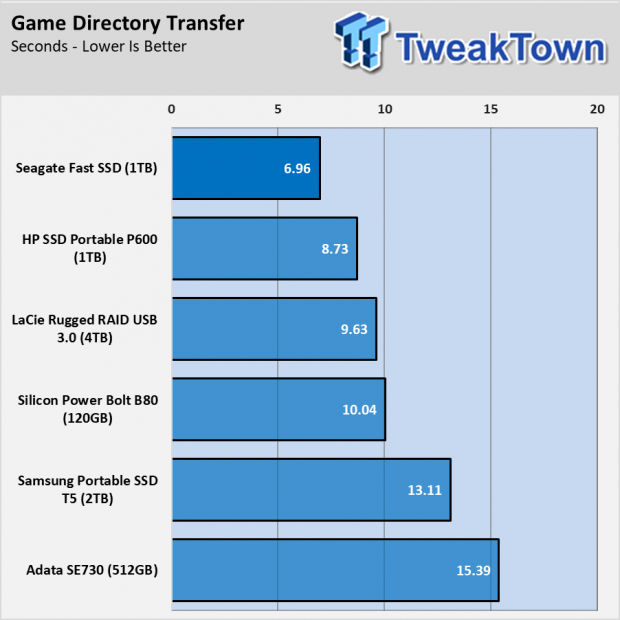 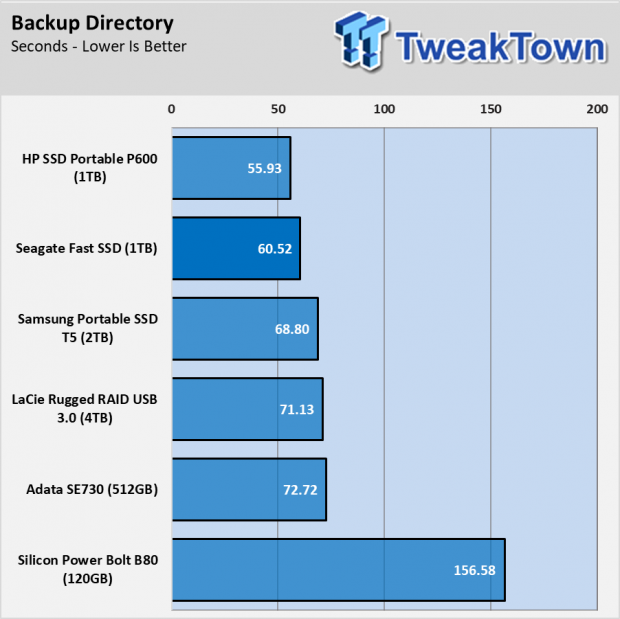 The 1TB Seagate Fast SSD is even faster than we expect. In our real-world transfer tests, the Fast SSD whipped through our data, and it didn't matter if it was large block sizes, like the Blu-Ray ISO, or small block sizes, like the game directory using rFactor. The mixed data transfer with just over 15 terabytes of data took just over sixty seconds. That was eight seconds faster than the Samsung T5.

The Seagate Fast SSD lives up to its name for USB-enabled storage. It would have been great for Seagate to use this branding on a Thunderbolt 3 drive backed by an NVMe SSD. Maybe we will see a Seagate Faster SSD in the future. As for right now, the Fast SSD is above average for USB-connected devices and for this price, we are fine with that.

If your needs don't go beyond the norm, the Fast SSD is a great option not just for yourself but also as a gift. As we move closer to the holiday shopping season, we may see pricing erode quickly. A portable SSD is a great gift idea for hard to shop for techy relatives.