We now can compare the highest core count Threadripper CPU, the 1950X (16 cores and 32 threads), against Intel's second highest i9 Skylake-X CPU, the 7960X (16 cores and 32 threads). Both CPUs take full advantage of the major technologies their series offer, both CPUs can overclock to 4.0GHz on all cores, both CPUs can overclock memory to 3200MHz, and today we put them head to head in a blowout.

After we ran all of our benchmarks, we used the 1950X as a baseline and compared the percentage of overall performance, gaming performance, productivity performance, power consumption, and finally price.

The CPUs and Test Setup 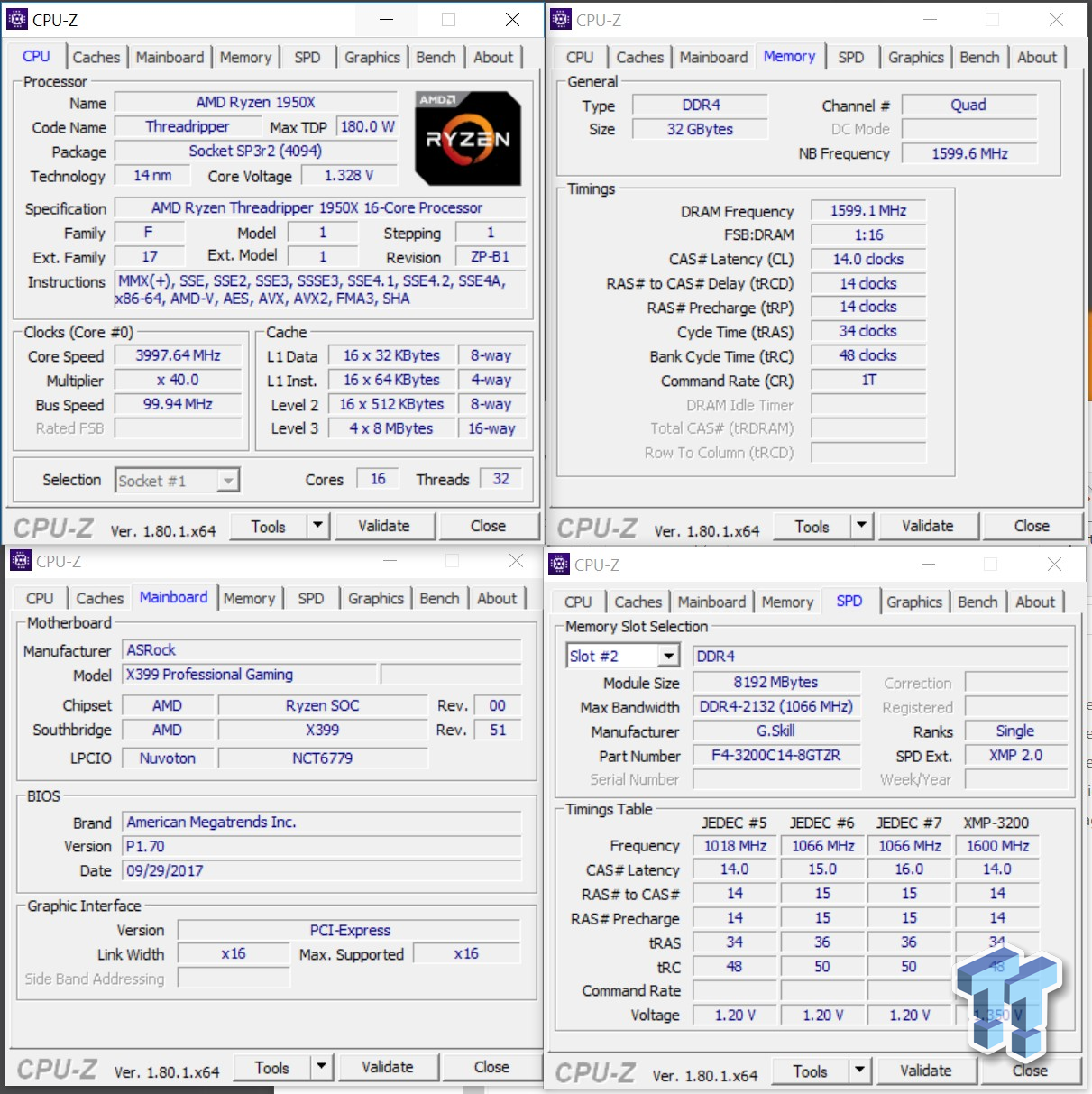 The Threadripper 1950X is clocked to 4.0GHz with a 100MHz base clock. Memory XMP is set on the G.Skill kit to 3200MHz C14, and that also increases the NB frequency (Infinity Fabric) to the same speed as the RAM, so from 1066 to 1600, which is a 50% increase. The CPU is fed 1.325v with LLC ON, there is a fan running full speed over the VRMs, and all radiator fans are going full speed at all times. I use the highest ranked motherboard from ASRock for the AMD Threadripper System and the Skylake-X system. 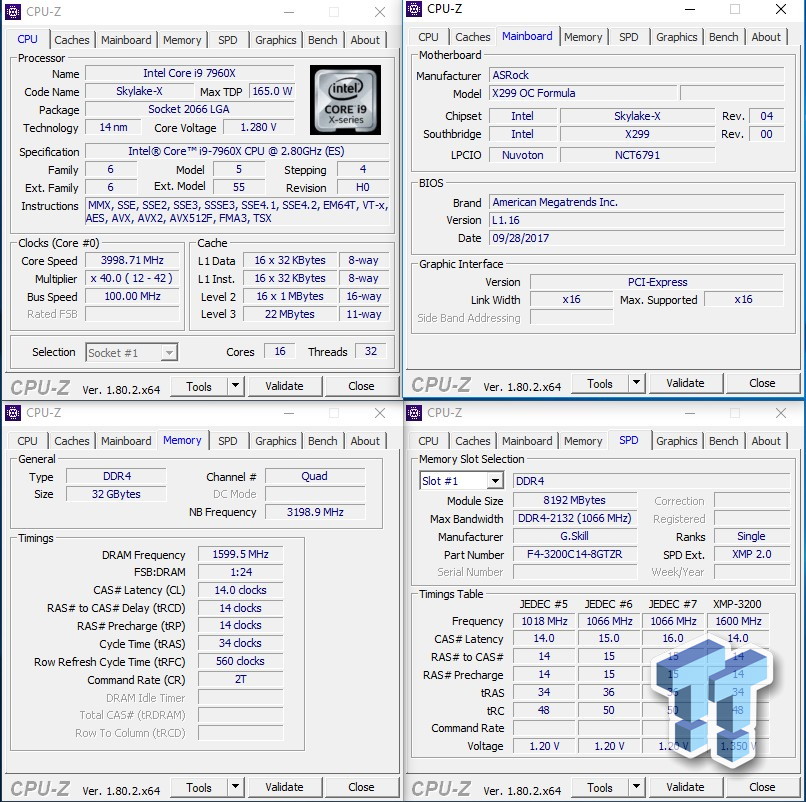 The Intel 7960X is clocked up to 4.0GHz using multiplier only overclocking. Memory speed is increased to 3200MHz per XMP, using the same exact kit that was used for the Threadripper testing. The Threadripper system also had its infinity fabric increased in speed by 50%, so I went ahead and overclocked the mesh speed from 2.4GHz to 3.2GHz, which is a 33% increase. An input voltage of 2.1v was used, and LLC was turned on. A fan was blowing right over the VRMs, and the radiator fans were always blowing full speed. 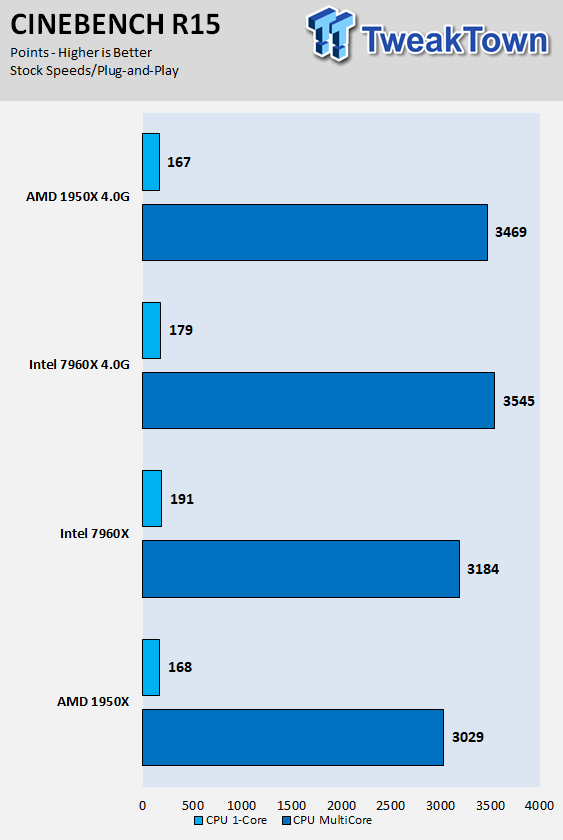 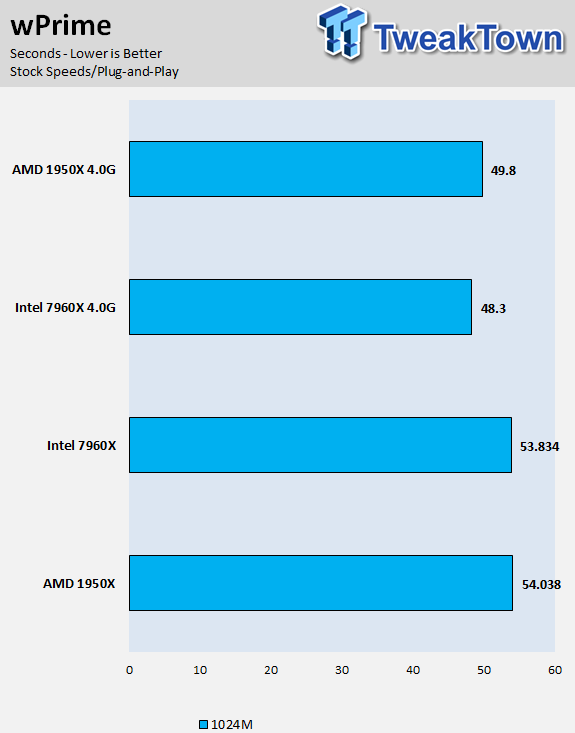 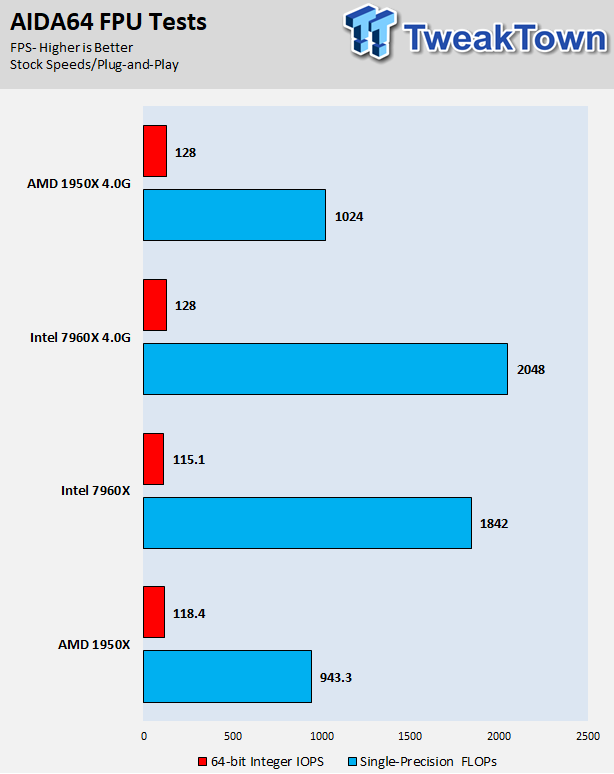 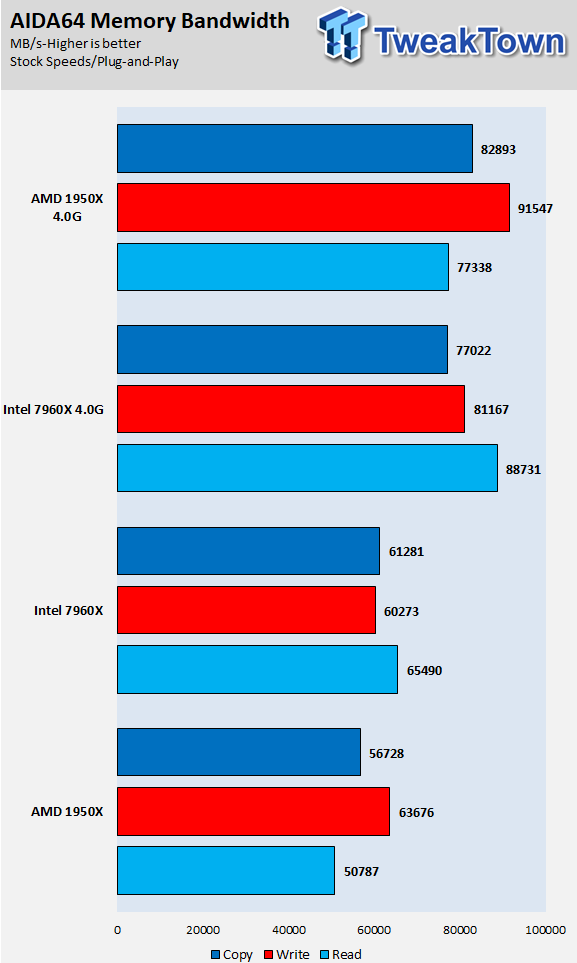 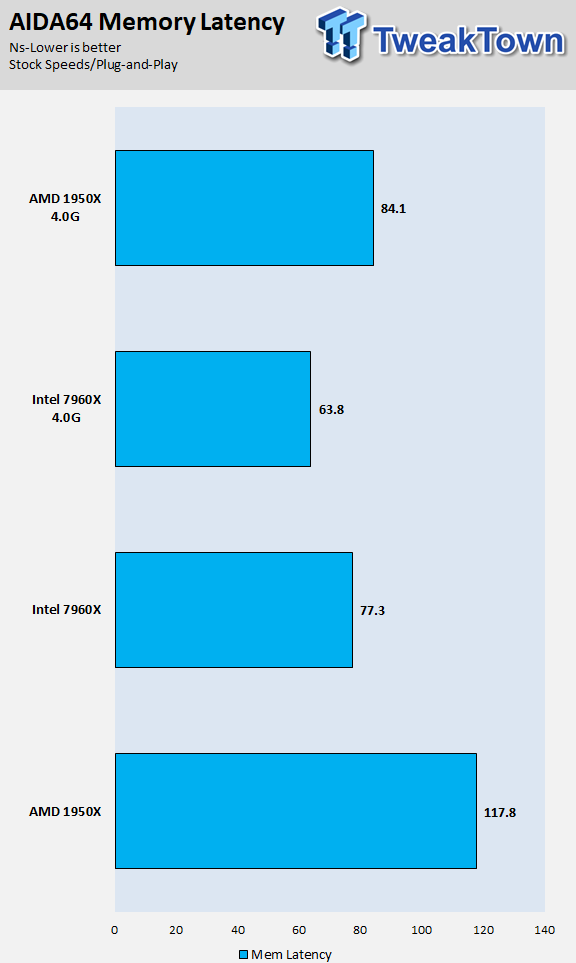 Once equalized, AMD's CINEBENCH multi-core and single core performance numbers are actually closer to that of the more expensive Intel CPU. We should note that by setting all cores to 4.0GHz, we negate any Turbo or XFR over 4.0GHz. In wPrime, we see that Intel still keeps its one-second lead.

We see that clock for clock AMD's Threadripper equals Intel's Skylake-X in 64-bit integer IOPS, but in SP FLOPs it is half as fast, but we saw the same type of activity at stock. Memory bandwidth is an interesting thing, AMD's reads and writes are faster, but Intel's copy is faster. Intel's memory latency is superior, but that is because Intel doesn't have an Infinity Fabric. 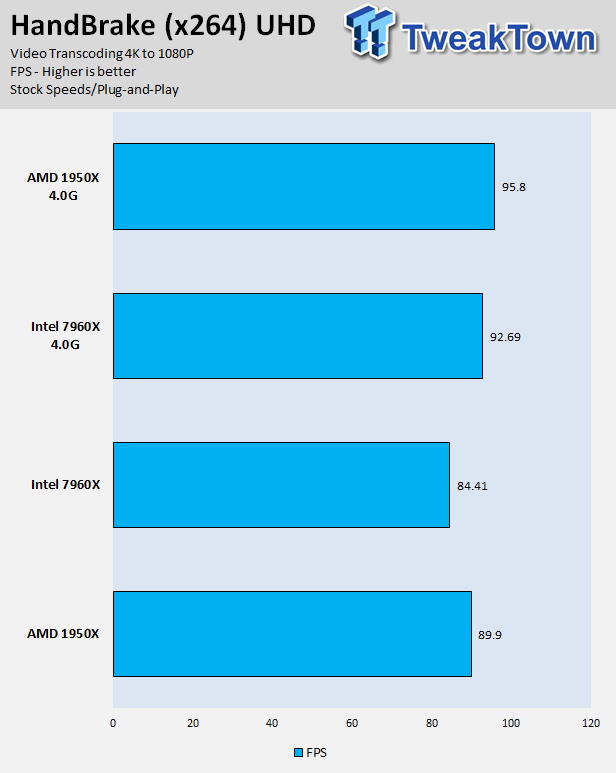 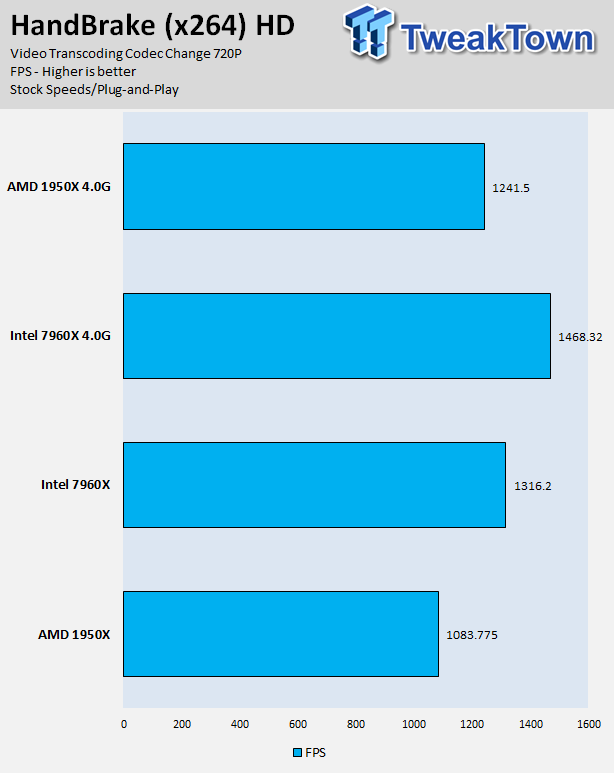 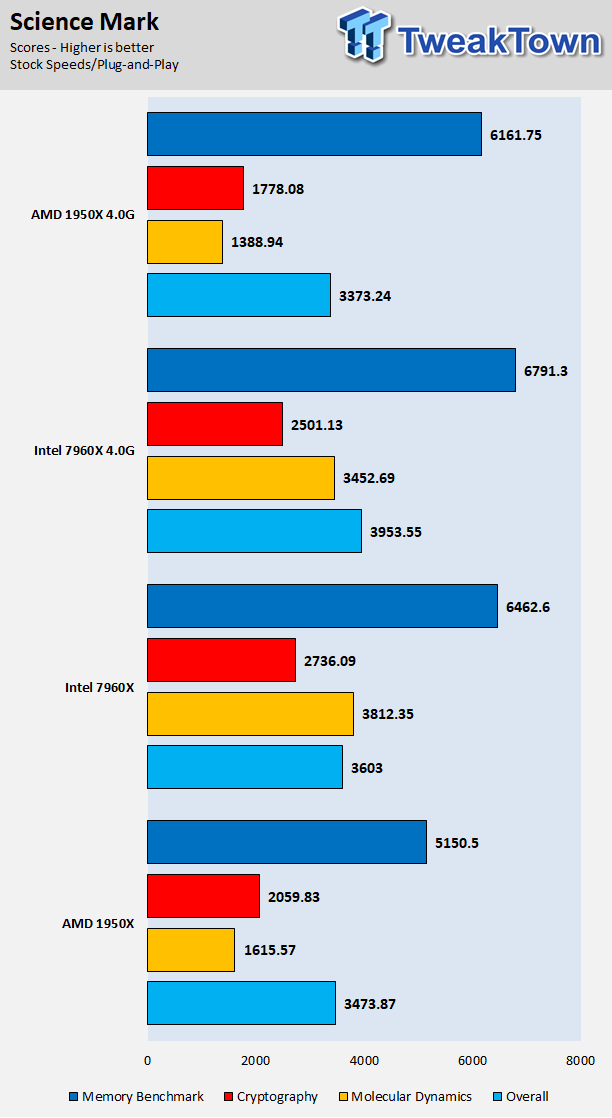 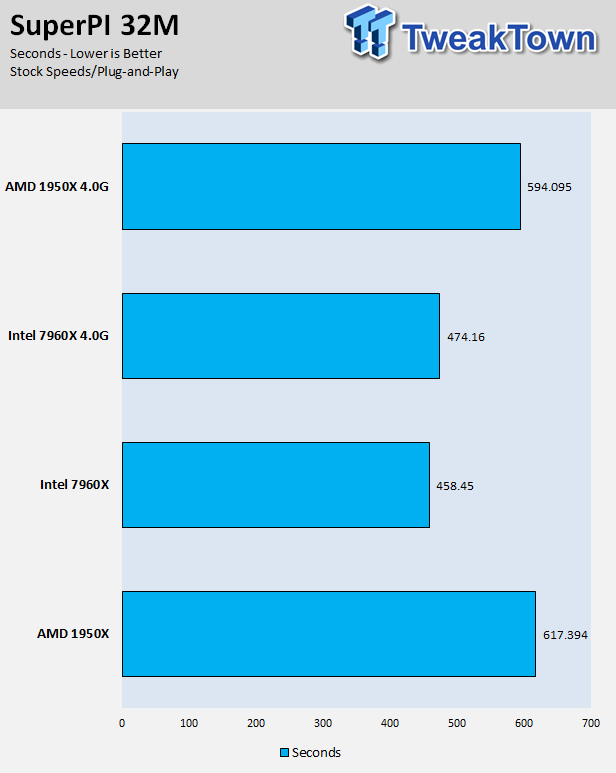 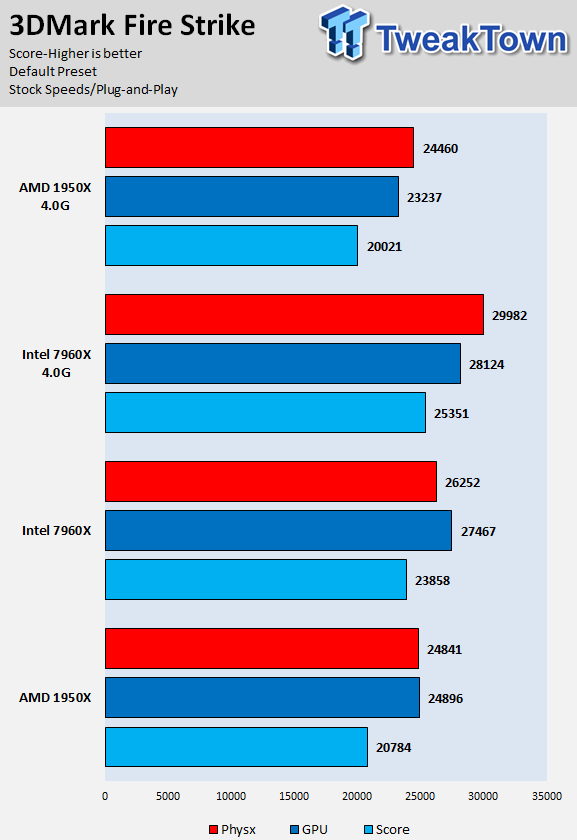 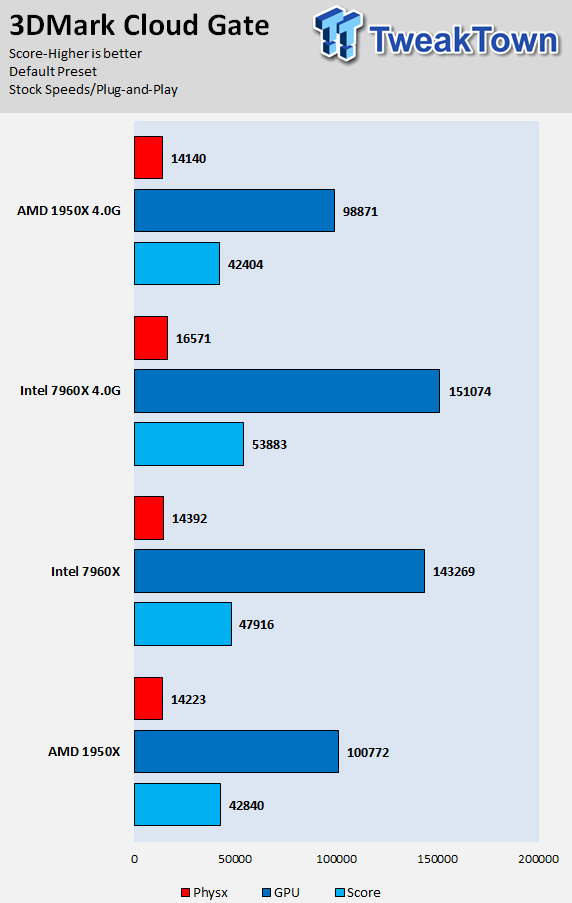 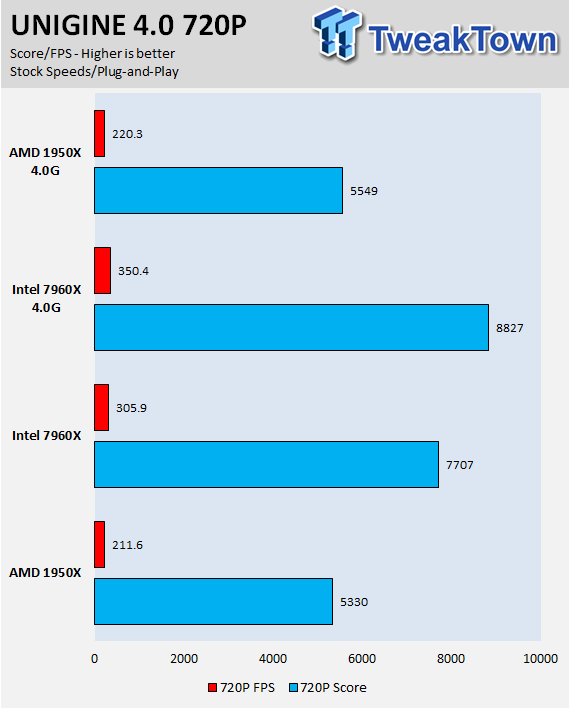 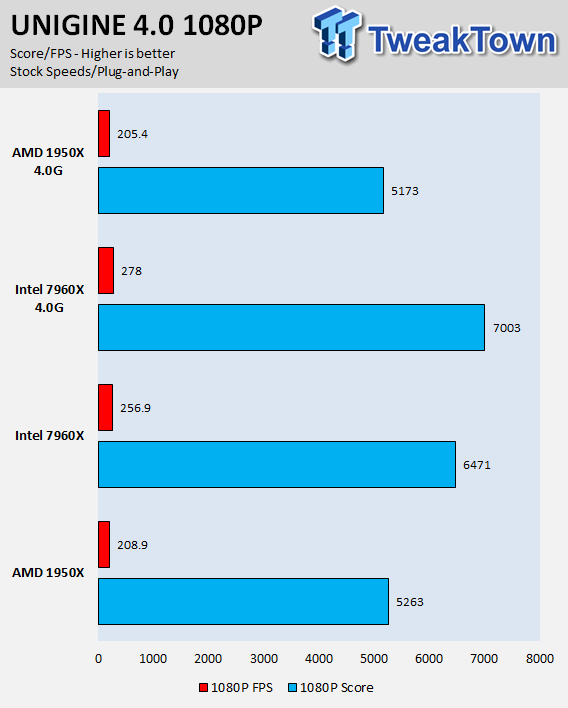 In FireStrike and CloudGate, Intel's offering wins. We also see that it also wins in UNIGINE at both 1080P and 720P, but the same was true when the CPUs were at their stock clocks. 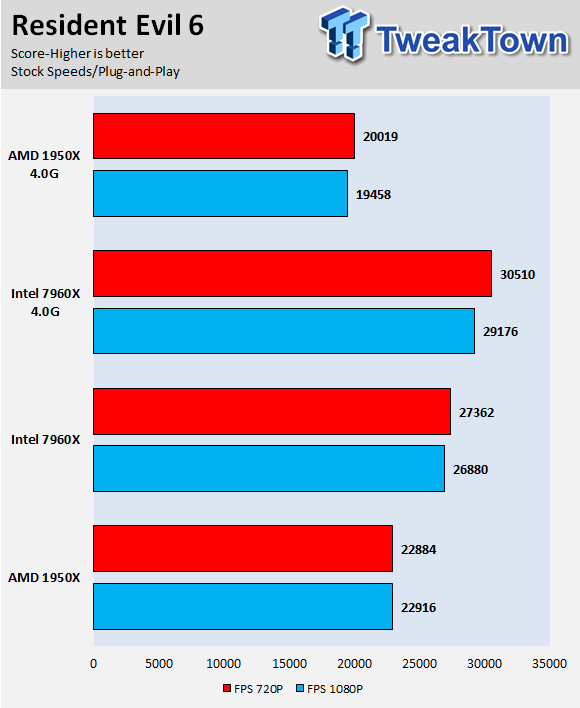 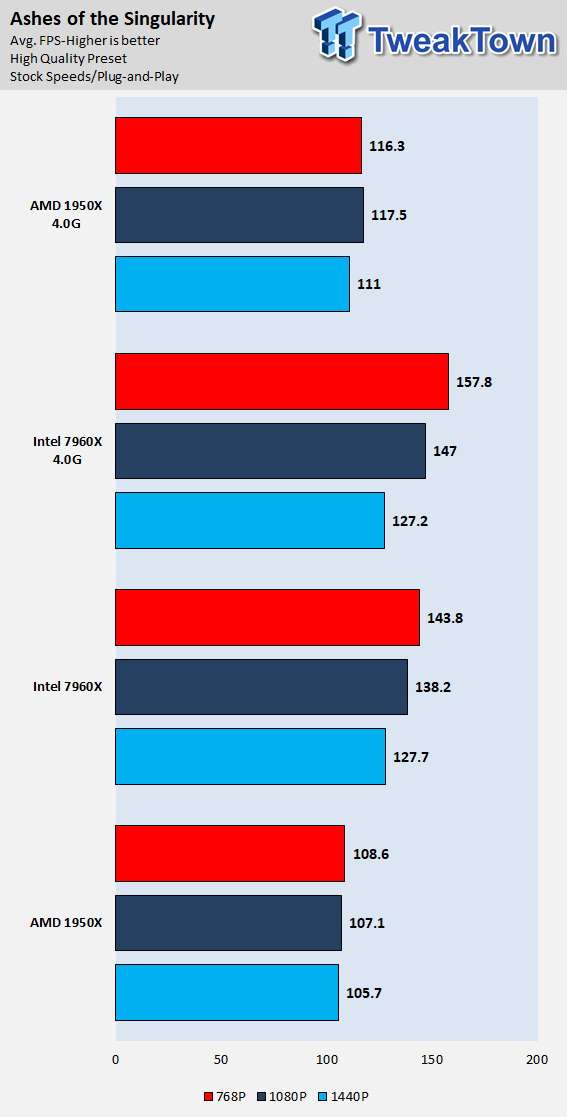 Intel takes the lead by an even larger margin than at stock speeds; the game tends to like Intel more than AMD. In GTA:V, both CPUs get a little bump over their stock scores, but the margin remains.

In Rise of The Tomb Raider, we see Intel's offering take the lead by a huge margin. However, AMD's minimum FPS rise more than Intel's do. Finally, in Ashes of the Singularity: Escalation, we fine that Intel still maintains the same margins, but AMD's offering gets a nice boost. 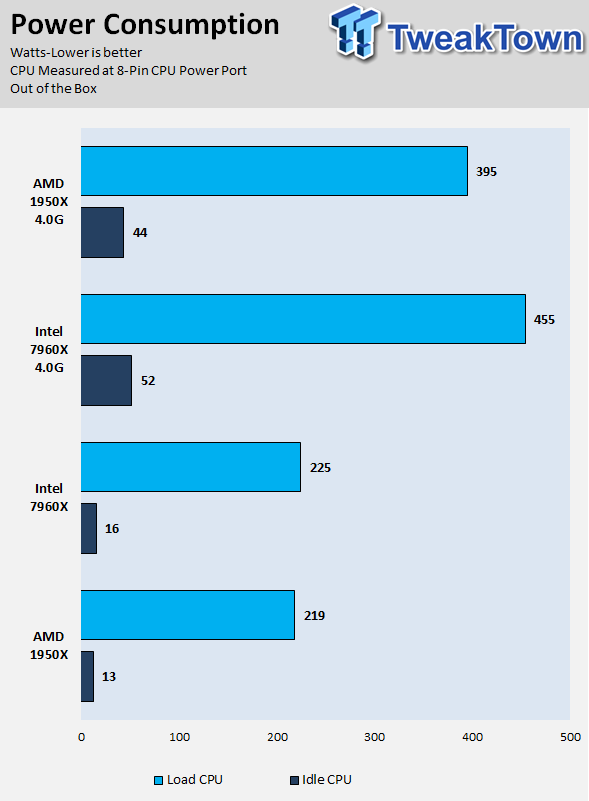 Intel's Skylake-X CPUs love to glump power, and that's partially due to the new mesh interconnect. While at stock the two CPUs have similar power consumption numbers when we overclock Intel's numbers shoot through the roof, which isn't an amazing thing. 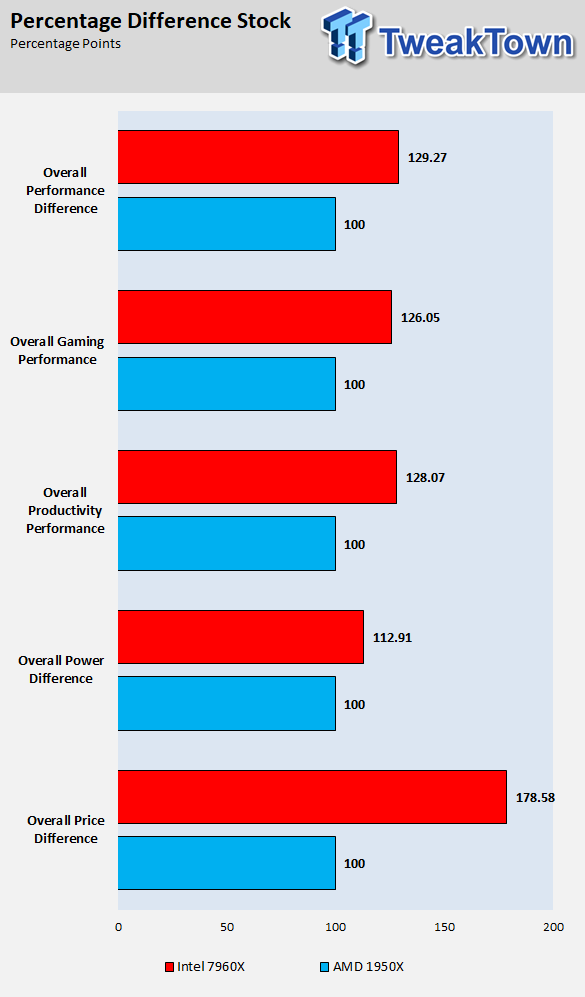 At stock, if we set the 1950X as the standard, we are getting roughly 29% more overall, 26% more in gaming, and 28% more productivity performance from the 7960X compared to the 1950X. However, the kicker is, you would also be paying 78% more for the 7960X, meaning you would be getting 30% more performance for 80% more cost. That actually isn't that uncommon in high-performance devices, and that's because as they break into these higher niche areas, price scales exponentially.

Once you remove buyers who value "price vs. performance", then you get into another subset of buyers. However, if you need 16 cores, and you don't want to sell a kidney for it, then at stock the 1950X is an extremely powerful option, especially for its price. If money is not an issue (for most it is), then Intel does offer a bit more. 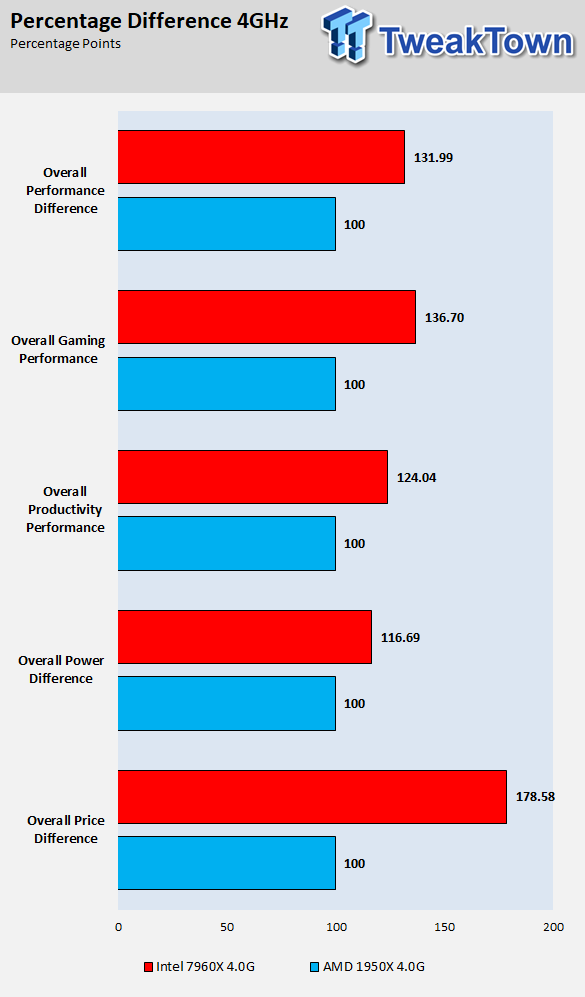 However, while Intel's power consumption was 12% higher at stock, it's now 16% higher overclocked (includes idle and load). Putting the Intel 7960X and AMD 1950X head to head, clock for clock, reveals three major trends. Intel's performance gains over AMD's decrease in productivity applications, but increase by a larger margin in gaming applications, resulting in a slight increase in overall performance.

At the same time, Intel's power consumption increases 4% while overall performance margins only increase 2%-3%. There are other factors to take into account, and this article isn't about telling you which CPU to buy, rather it's looking at how AMD's microarchitecture is doing against Intel's in the high-end desktop segment, so far, quite good.