All NewsBusiness, Financial & LegalCases, Cooling & PSUContests & GiveawaysCPU, APU & ChipsetsDealsDisplays & ProjectorsGamingMotherboardsScience, Space & RoboticsStorageVideo CardsVirtual & Augmented Reality
All ReviewsAll ArticlesAudio, Sound & SpeakersCases, Cooling & PSUCPUs, Chipsets & SoCsComputer SystemsDisplays & ProjectorsGamingMotherboardsNetworkingPeripheralsStorageVideo Cards
GuidesGamingAsk the ExpertsNewsletterAboutForums
Chia Coin MiningRTX 3090RTX 3080RTX 3070HDMI 2.1Bitcoin MiningBattlefield 6
TRENDING NOW: There's a single Dogecoin holder with 28% of supply worth $23 billion
IT/Datacenter
SSDs
Solid State Drives are nothing new. They have been around for a while now and it seems that just about everyone has one. But that is also one of the biggest problems. Many of the manufacturers making them have never made a drive for a computer before and have their own method for how the drive handles data. This has meant that the SSD options out there vary greatly from one vendor to the other. We also see a tendency to push for high read speeds and for the most part have ignored write and I/O operations (Input/ Output).

This has left the enterprise section of the market (and to a lesser extent, the Prosumer) out in the cold as these two segments often need a more balanced approach like that offered by SCSI and SAS drives. Thankfully all of that is changing as Seagate enters the fray; they took their time to work with customers (mostly OEMs) to make sure they covered the type of performance needed for this important and demanding segment. 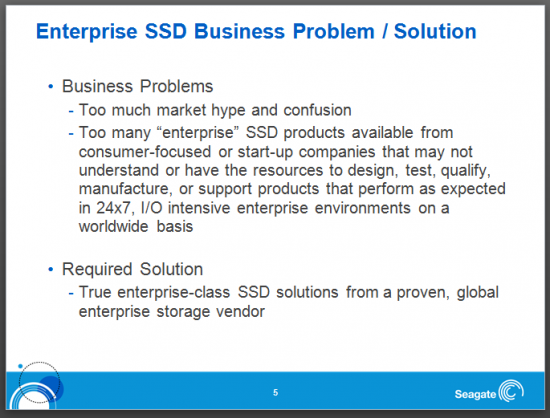 Today Seagate announces the launch of their new Line of Enterprise class SSDs. This new line will be called the Pulsar. This will also be the name of the first model to ship. 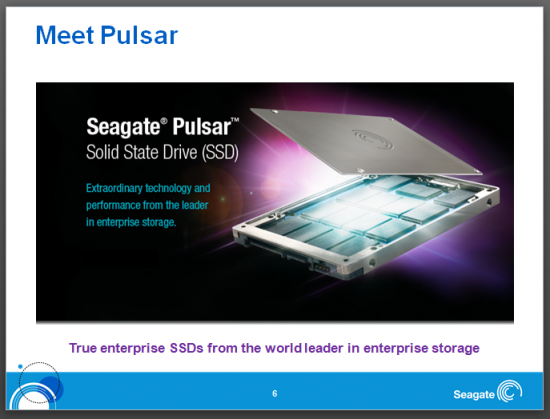 This new SSD aimed at high I/O and write speeds will be based on the SATA II standard to allow for "Drop-In" Compatibility, preventing the need to upgrade to new controllers. But that is not the only place you will get to shave off a few dollars. Seagate has worked on the Pulsar series to ensure that you can get the same level of performance out of a smaller number of drives. This will allow you to exceed current HDD performance, not drastically increasing upgrade costs. Now, I am not saying that moving to SSDs is going to be cheaper than traditional magnetic media, as this is just not the case yet. 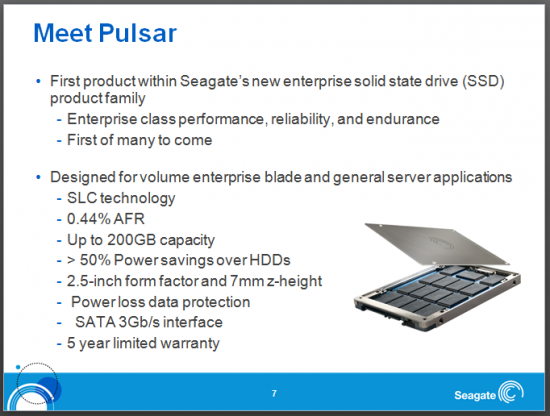 But that is not the only area where you will be able to save money; SSDs are less power hungry than traditional spindle based storage. If you compare a 15,000 RPM HDD to the same capacity SSD, you will see a very large difference in the power draw at idle and under 100% load. This will lower any businesses TOC (Total Ownership Cost) and improve the time for a return on the investment. This will help to drive down the cost of owning DAS (Direct Attached Storage) and smaller blade servers in the near term while keeping capacities high.

Seagate has worked very closely with their OEM partners to ensure the Pulsar line will give them the reliability they need from an enterprise product as well. They have made the decision to work with SLC (Single Layer Cell) NAND (Not And) Flash memory; this combined with a few other improvements gives the new Pulsar an AFR (Annualized Failure Rate) of only 0.44%. This equals roughly a 2 Million Hours MTFB (Mean Time Between Failure). This is a level of reliability that exceeds just about any other drive on the market (SSD or HDD). 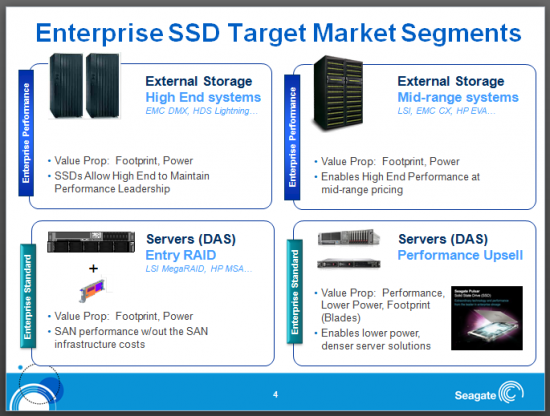 Not a bad option of high I/O and heavy write workloads. Of course, the fun does not stop there; Seagate has added in a few nice options to ensure data protection like battery backup for sudden power loss. This will enable the drive to write any cached data to the drive in the event of a power failure.

Unfortunately, for most of us the new Pulsar is going to be made available to OEMs only. In fact, Seagate told us that these drives started shipping to them as test and design samples back in September. Another interesting item is that while the Pulsar has "gone public" today, the individual OEMs might not push these into the channel until sometime next year (2010).

I asked Seagate if this would change and they said that beginning in 2010 there should be drives available for individual purchase. Still, it is important to remember that these drives are aimed at the enterprise and not the consumer. Seagate is aiming these at high Input/Output, Write, and 24x7 data availability needs, while the traditional SSD is aimed at high read speeds and are not as concerned with longevity or 24x7 use. Still, at least we are finally seeing Seagate enter the SSD market and is doing so with firm standards in mind. Hopefully this will help to push the industry towards adopting a few standards for the manufacture of these drives for the consumer as well.