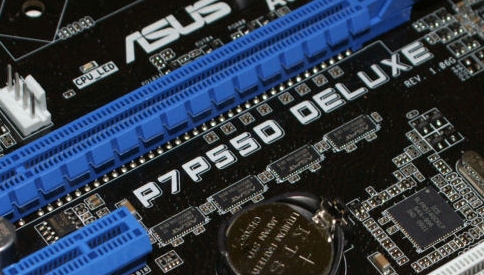 During Computex earlier this year we heard alot about Lynnfield and its accompanying P55 chipset that will soon be making its way to market. Lynnfield is the new LGA1156 socket base for supporting Core i7 and Core i5 processors, designed to take on the mainstream, where the current Core i7 and upcoming Core i9 will be aimed at the high end to extreme users.

P55 is Intel's newest chipset to come out. This is the mainstream brother to the X58 chipset, which we all knew was coming anyway. P35 came after X38, P45 came after X48 and now P55 has come after X58. But we aren't here today to talk too much about the P55 chipset, since we are under NDA from Intel and we can't give a lot away. Unfortunately this also excludes us from being able to show any benchmark results. However, we are able to give you a preview of one of the ready to ship ASUS P7P55D Deluxe boards based around the P55 chipset.

The P7P55D Deluxe board is aimed at the mainstream segment, but due to its early release we are not sure of its price point as yet. Let's move on now and see how the box is presented and what surprises may greet us inside.

While we can't give much away on the performance of the board, we have been given the ability to show you the board itself and what you get with it. ASUS has gone for the traditional blue box design that they now put all their Intel based boards in. On the front it's very plain. What you can notice is that ASUS doesn't actually have the chipset logo or the processor logos on this board yet, which means there may be some name changes.

On the back of the box ASUS has put a few marketing bits and pieces together. However, a lot of the space is taken up by the colour photo of the board and a full spec listing of the features and supported functions. This is a big plus, as you'll know full well what you are getting without having to open the box.

For a Deluxe board ASUS has gone a bit lighter on the additional documentation. The user manual that is included for the board is well up to the usual ASUS standard; very large and thick with explanations of the hardware and software included on the single DVD which has Windows XP and Vista drivers for both 32-bit and 64-bit OS's.

The accessories are also pretty light with only what you need provided. There are a total of six SATA data cables as well as one IDE cable. ASUS also provides EZ-Connectors to help you connect the case panel switches as well as including an SLI bridge cable. Lastly, there is a USB/FireWire PCI cover bracket expansion port.

Last on the accessories list is the Turbo-V Evo controller. This allows you to adjust BLCK, voltages and ratios with just a click of a button.

Now it's to the board itself. ASUS uses a full ATX standard for the P7P55D Deluxe and a black PCB colour scheme with blue and white slots are the theme. The layout, well, as usual ASUS does a fantastic job. The 24-pin ATX power connector is located behind the four DDR3 memory slots along with a MemOK button. The 4/8 pin combo connector is located right at the top of the board, just above the heatpipe assembly that cools the Mosfets.

ASUS has introduced into this series its 16+3 power delivery. The 16 phases deliver voltage to the CPU vCore, while the extra 3 phases supply voltage to the UnCore and the integrated memory controller. These Mosfets are cooled by a heatpipe assembly.

The P55 chipset is Intel's first single chip solution. Since the memory controller is integrated into the CPU, there is no need for a separate Northbridge. The P55 single chip is cooled by a passive cooler.

The rear I/O ports on the board are pretty standard. There are two PS/2 ports, USB and Ethernet along with six audio connectors. A CMOS reset button is included in case you do overclock you system to a point where it will not reboot on its own. Unfortunately there are no eSATA ports on this board.

Lastly, we look at the expansion slots. But before we do that, I'll first provide a bit of info on the P55 chipset. P55 is actually a cut down version of the X58 and ICH10R integrated into a single chip design. Where the X58 comes with 32 lanes for PCI Express channels for graphics expansion, the P55 is limited to 16. However, these can be set as a single x16 slot or two x8 slots for SLI or Crossfire. That's right, the P55 supports both SLI and Crossfire, just like X58, thanks to the board manufacturers having been given a licence for SLI.

The ASUS P7P55D Deluxe is equipped with three PCI Express x16 slots. The top two are designed for graphics cards which can be split into a 16/1 or 8/8 configuration. The third slot is designed for a spare graphics card for PhysX or a RAID controller card. Two PCI x1 slots sit between the two x16 slots for graphics cards, which is rather stupid actually. If you use a two-slot card like a GTX 285 you will lose access to these expansion slots. Lastly, there are two PCI legacy slots.

We hope you have enjoyed our first look at the ASUS P7P55D Deluxe board, as we are quite excited to get into testing this board. Unfortunately due to Intel NDA and not having an LGA1156 CPU yet, we can't give you any benchmarks, so it's not fair to give this board a rating yet. And with no pricing, it's harder still. However, we will re-visit this board as soon as we are able to get our hands on a CPU and once the NDA expires.

The layout and features of the board are top rate. We would have liked to have seen a few extra features like eSATA and some other extra goodies for this level of board, but it's still got what it takes to impress. Let's see how well it performs and overclocks in the future to come.