The guys down at IBuyPower Australia can't get rid of me these days. I'm surprised they haven't started asking me to pay rent. The other day the ASUS P5E64 WS Evolution board arrived, and this thing just absolutely won me over as far as looks and features went.

However, the feature that we really care about today is the fact it has four PCI Express x16 slots. While ASUS use a x16/x16/x4/x4 configuration, it's really one of the best on the market. So, with four HD 4850s in hand and hopefully a driver that was going to work, it was time to take four of these single slot bad boys to town.

Before we get stuck into the results, let's have a quick look at the photos and just how cool four graphics cards in your system looks. From there we will get stuck into our benchmark results and see what's going on with CrossfireX in the new 4800 series cards from AMD. 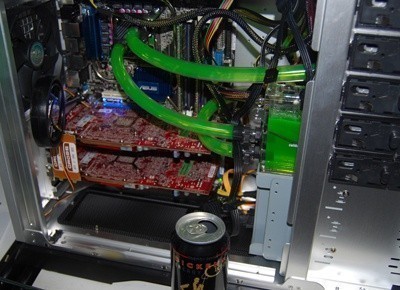 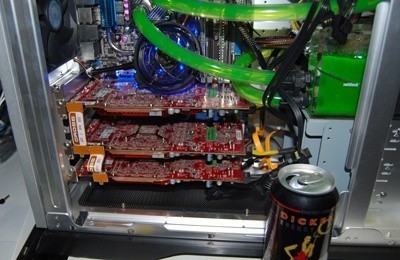 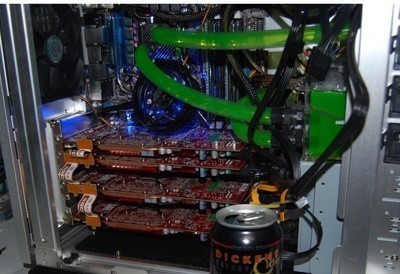 We can see that just like Tri SLI, we do get some gains across the board; but nothing major.

The more intensive Vantage does show us some better gains as we climb through the ranks.

Here we can see that we do have some issues with CrossfireX; two to four cards give us a bit of a gain at 1920 and 1280. However, the CrossfireX setups run into big problems at 2560.

It is of no surprise that CINEBENCH doesn't see any improvements. As we add more cores, the score begins to drop.

WIC sees performance also going backwards as we move cards. The four card setup once again runs into trouble at 2560 x 1600 which is unfortunate.

We can see Crysis has some serious issues with CrossfireX. When we went to 2560 we ended up with an average of under 1FPS.

Unreal Tournament 3 which always manages to make good use of extra cards, really sees some good gains as we move up in the resolution table. At 2560 x 1600 we move from 95.43 with two cards to 156.63 with four. Sure, in a value for money sense it's not fantastic, but at least we can see that there is potential.

In 3DMark06 we can see that as we place more strain on the cards, we do see gains. Once again though, given how much extra you pay, the gains are pretty small.

With AA and AF turned on we run into the same negative result issues we have seen previously. Hopefully this is something the ATI driver team look into as time goes on.

It seems that the Hot Fix driver should simply be called the "Increase your 3DMark score" driver. Apart from the two synthetic benchmarks, the only game to really see an increase in performance was Unreal Tournament 3. Outside of that, most games had a negative affect when adding more cards.

Hopefully this is something that AMD attack over the coming months. With more and more boards offering two or three PCI Express x16 slots, placing a third card into your system at these prices could be more than doable.

Two cards really is the sweet spot for HD 4850s at the moment; we see some good gains over a single card and the cost is still relatively low compared to the competition. Now all we have to do is wait for the HD 4870 so we can see what that can do for us.

AMD have a winner on their hands with the HD 4850; just don't expect to see the same value for money as you start climbing the ranks with three or four cards. It could still be a while before we see these kinds of setups represent any form of value for money, much like NVIDIA with their Tri SLI GTX 280 setup.