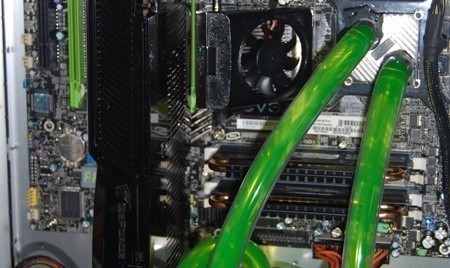 Feeling a little underwhelmed with the initial GTX 280 results, I took the time to make my way over to the IBuyPower Australia bunker to let the card have a bit more breathing room. While our 3GHz test bed is quite modest and a good indication of performance for the everyman or woman, there is of course people out there who are a bit more hardcore and do have a few more dollars to splash about.

Since the card has just been released, we thought it was the perfect time to really see what the card was capable of in a very nicely overclocked QX9650 rig carrying with it a 10 x 400MHz FSB combination.

At this speed we had a Swiftech water cooling setup attached which caused the CPU to stay below 47c on all four cores. We had found our rig, and now it was time to see what kind of performance increase we get when we move to something that carries with it faster RAM, a faster HDD and of course a faster CPU.

Let's not delay the results; since we've already looked at the ZOTAC GTX 280 in full detail, we're just going to get straight into the benchmarks. Let's go!


As you can see above, the upgrade to the 4GHz system is quite the jump. Let's not carry on though, it's time to get stuck straight into it.

Straight away we can see that 3DMark06 absolutely loves the massive CPU clock and really gives us some huge numbers. Our single card is well and truly on its way to 20k.

It seems that Vantage doesn't benefit as much from the big overclock; we have about 10% more with the performance run, but no real change with the Extreme setting.

Moving to PT Boats, we continue to see big gains from the new setup. We move from a 26 FPS minimum at 2560 (which we would consider the absolute minimum) to 37.3FPS which is absolutely fantastic.

We can see CINEBENCH doesn't really benefit from the extra CPU power.

While the minimums don't move much, we can see that the averages are way up across the board. Playing WIC at 2560 x 1600 on a 4GHz system is going to be doable.

It's clear that Crysis isn't starved for CPU, rather GPU. Hopefully we start to see significant gains in our SLI/Tri-SLI testing.

We see big gains from the 4GHz rig when compared to the stock 3GHz testbed at the lower resolution. At 2560 x 1600 the system seems to take a bit of a hit with a low 60 FPS average.

Back to 3DMark06; we again see big gains with the 4GHz IBP rig.

WIC is another game that doesn't seem to benefit so much from the extra MHz on offer when AA and AF are enabled.

It was good to take the time to go visit IBuyPower Australia and see what the GTX 280 was capable of when placed in a higher clocked environment. For the most part the overclocked QX9650 processor used here did manage to breathe a bit more life into the card.

It's nice to see the card get a significant boost in some situations, but as you can see some games aren't always a matter of simply adding more CPU power. It's clear that some games want more graphics card power, and for that reason we will be diving into SLI multi GPU setups later on tonight, so keep an eye out for some 4GHz SLI love.

Has my opinion changed on the GTX 280 from earlier in the night? - No, not really; it still feels a bit lack luster and flat. What we hope to see though is that the GTX 280 really begins to shine in an SLI environment. The only problem I can see is that if the card begins to really shine in SLI, we're looking at $1200+ USD or $1500+ AUD setup costs, which is far from cheap.

There is no doubt that the GTX 280 does love the extra GHz that is on offer from the IBP system, and for the most part we do see some excellent gains in applications. We can see that when running PT Boats at 2560 x 1600, the difference between the two setups was that the game would be playable at 2560 on the IBP system while you would probably be a bit disappointed plodding along on the 3GHz system.

Keep an eye out for some SLI testing and we will really see what the 4GHz beast from IBP is capable of.