The 2TB Silicon Power XD80 we have on our bench is more of a refresh than something new. The drive is composed of hardware that takes us back a year or two. The XD80 employs a Phison E12s 8-channel controller managing a BiCS4 96 Layer flash array. This was and is, to this day, one of the most prolific hardware combinations for consumer NVMe SSDs ever made. It might even be the most prolific of all time as most SSD retailers have several SSDs sporting this exact hardware combination.

However, the 2TB XD80 is physically different than other 2TB Phison E12s/ 96L BiCS SSDs we've reviewed before. First and most obvious is the XD80 has a relatively thin and stylish integrated heat sink that's a design we've not come across before. Secondly, and most importantly, as we see it, the 2TB XD80 is the first single-sided 2TB SSD E12s/96L BiCS 4 SSD we've come across. To date all others, we've encountered have been double-sided designs.

Although XPower XD80 we have on our bench today is a PCIe Gen3 x4 SSD, it has something going for it that no Gen4 consumer SSD to date can match. The XD80 2TB is rated for more than 3 petabytes of endurance. Currently, endurance is something more and more consumers are taking a close look at as a major factor in their buying decisions. Why? Chia storage-based crypto mining is why.

As we see it, the Silicon Power Xpower XD80 2TB is ideal for a Chia temp drive. Obviously because of its class-leading endurance rating, but a more subtle reason as we see it is because it is Gen3 instead of Gen4. PCIe Gen3 is plenty fast enough for a Chia temp drive, and we would argue that Gen3 is preferred because it uses less power and generates less heat than typical Gen4 NVMe SSDs. We figure the XD80 2TB can produce several thousand standard (101 GiB) Chia plots before it becomes exhausted. Not bad for a $300 SSD.

As mentioned, the XD80 2TB is the first Phison E12s powered 2TB SSD we've seen that is a single-sided design. We like that a lot. Another thought is if the heat sink can be removed, and it likely can be, it is an ideal drive for laptop applications, again because it is single-sided (all components on one side of the PCB) and Gen3. 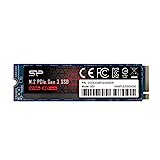 Silicon Power does offer an SSD toolbox. However, it's not currently compatible with the XD80, and neither is the cloning software they offer. Not a problem because you can use the free tools below for monitoring, imaging, and cloning.

If you need to clone or image, there is freeware for that here.

Because this is a Gen3 SSD swimming in a sea of Gen4 competition, we will point out that the XD80 isn't going to exactly top our charts. That is fine as we see it because this SSD isn't about being the fastest. It's about being high endurance, hitting factory specs, and doing so as a single-sided design.

Silicon Power specs the 2TB XD80 as capable of 3,400/3,000 MB/s sequential read write performance. Our results are better than factory specs, which isn't something we see happen a lot. Excellent.

In terms of the total score, the XD80 delivers better than the other Gen3 SSDs that populate our chart. This is a good indication that for what it is, the XD80 is as fast as they come for a Gen3 flash-based SSD.

We almost NEVER see an SSD that beats factory specs for both max random read and write. The XD80 can do both, despite running in our more demanding user state of OS disk 50% full. We especially like what we see on the read side. At 622K, that's actually better than we get from a Gen4 E18 SSD with 96L Micron flash. Nice.

AS SSD is particularly tough on Gen3 SSDs, and the XD80 is no exception. It does manage to outdo one Gen4 SSD, but as expected, it takes up residence at the bottom of this chart.

Gen3 with BiCS 4 can't do our 100GB data block at a high transfer rate. It never could. However, it is still plenty good for what it is in our opinion.

Serving a fat chunk of data to the host is something the XD80 does about as good as any flash-based Gen3 SSD ever made.

At 9.5 seconds, the XD80 is about a half-second slower than we like to see as a minimum for a gaming-focused SSD. However, that half-second is only a tenth of a second per level and likely isn't going to be a problem for most gamers.

This particular test writes over 204GB data and covers a broad range of common consumer tasks, including booting Windows 10, file transfers, Adobe and Office applications, and startup times for games including Battlefield V, COD Black Ops 4, and Overwatch. Unlike synthetic numbers, this is comprehensive real-world data which is why we use it to rank SSDs in terms of user experience.

Heavy-duty workloads hammer the XD80 pretty hard. No worries, though, as long as it can digest our next test relatively well.

Hey, there we go. The XD80 is doing moderate consumer workloads like a champ. Surprisingly, it is doing them better than some of the hyper-class Gen4 SSDs that are swimming around in our test pool. Excellent.

The Silicon Power XPower XD80 2TB SSD is proof that Phison's E12s PCIe Gen3 x4 controller still has some gas left in the tank. We find the 2TB XD80 particularly attractive for what it is for reasons other than sheer performance. It's certainly not what we would consider a modern-day speedster. Still, as we touched on earlier, it has the physical attributes we prefer and is rated for over 3 petabytes of endurance. That's massive endurance for write-intensive applications or Chia plotting.

Because the Silicon Power XPower XD80 2TB is a Gen3 SSD, there arent a ton of eye-catching numbers to look back on. However, there is one that we will point to that we believe shows the XD80 can deliver the goods at a high level where it matters most. This Gen3 SSD hit nearly 400 MB/s storage bandwidth on the test we consider our best indicator of user experience, PCMark 10 Quick System Disk. That's impressive and proof enough that the XD80 can and will deliver performance where we feel it matters most.

Chia Farmers take notice, this drive has the endurance you need at the capacity you want.