Silicon Power has been around for quite some time, offering internal and external storage solutions and industrial SSDs, DRAM, and memory cards. Its latest portable storage solution for the consumer market is the PC60, which is built on a small form factor platform for increased portability.

From the top, the PC60 is a SATA-based solution internally, that's pushed out over a 10Gbps USB 3.2 Gen 2 connection. Silicon Power has deployed the USB-C connection with this drive and included cables to maintain backward compatibility. Compatibility extends to Windows 10 and macOS along with Linux 2.6 and Android 6+.

Tucked away in a white box branding across the top, we find the PC60 peering through a window. The capacity is listed top right at 960GB and marketing performance above 540/500.

The back goes into more detail with specifications and box contents.

Unboxing, the PC60 is a perfectly square solution with a slot top left for a key ring or similar. We have the USB-C to A cable included.

Output if the PC60 is via the USB-C connection seen above.

The bottom of the drive has the capacity and model etched next to regulatory information.

CDM is a staple in performance testing; version 7 has seen some updates in the workloads used for testing. The PC60 didn't quite hit the marks as advertised with our testing, showing only 461 MB/s read and 450 MB/s write.

ATTO is yet another popular benchmark for storage performance that breaks down performance based on file size. In this scenario, the PC60 does quite well, bringing top performance from 128K through 12M, where it slides off a cliff.

New to our testing is a 200GB data transfer that aims to weed out drives that lose performance during backup scenarios. In this workload, the PC60 didn't fair too well, taking 45 minutes to complete the transfer at a rate of ~80 MB/s.

Price/Performance of the 960GB PC60 put it towards the middle of the pack at 79%.

The PC60 is an entry-level portable SSD and accompanies with it the characteristics of a drive that has had every corner cut that could be cut. The enclosure is among the cheapest of plastics and feels like it's going to fall apart in your hands any second. Adding to this, the internal drive is among the worst we have tested, making it almost unfit to be a storage device.

As mentioned, the PC60 offers around 460/450 MB/s in our testing, and that lasts for about 20 seconds sustained before the write performance takes a complete dump, and you are left with a drive no faster than a USB 2.0 flash drive.

CDM did give those rather decent numbers we mentioned up top at 460 MB/s read and 450 MB/s write, but we quickly see it all start to fall apart moving to ATTO where the write performance tanks to 75 MB/s towards the end of that workload. What really pushes the PC60 to the limit is our 200GB file transfer test, where at one point, the drive was transferring at 28 MB/s, eventually putting together an average of 80 MB/s and taking 45 minutes to finish.

If there is a silver lining to the PC60, it may be the price, as the current MSRP sits at $105.99 for the 960GB solution making it about half the cost of more well-known brands like SanDisk, Samsung, or Seagate. 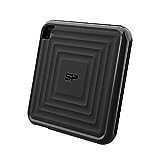 The PC60 is a rough drive and really should only be considered if you are working with read only workloads.