The left edge of the One2 Mini RGB shows a frame that hides most of the switch body, with just the keycaps exposed above it. The top portion of the frame is made of textured, matte, black plastic, while the lower section is red, but is also shiny and reflective! We also notice an increased attack angle compared to the usual suspects, and we have yet to mess with the adjustable feet!

There is a lot to take in looking at this image! Most notable is the lack of size and keys at the right side, as this is only sixty-percent of a standard 104-key layout! The keys we do have are capped with cylindrical-shaped PBT keycaps with the legends molded in the first shot, and the black or red outer layer shot second. You also will see printed secondary functions on the front of many of the keys, which can be accessed with the Function key or Function+Alt. The Macro system is on the left side, multimedia down the front, and we love the sleek and tidy frame around it all.

When you are away from the PC for more extended periods, you can place the dust cover over the keyboard to keep dust and debris off of it. It may also help in the times where you are working at the desk with an open drink, either way, we like the addition! The right edge of the keyboard is a mirror image of the left side, with the two-part frame and keycaps exposed above it. However, this time we extended "stage 2" of the feet, putting the One2 Mini RGB in its tallest position. Again, a better angle than we usually see, but the "stage 1" foot leaves the One2 Mini at a height most are already used to. Around the back of the One2 Mini, we can see that Ducky went first this time, followed right behind by HyperX, with the black painted application of their names to contrast on the red frame. If you look a bit lower, you can see the feet, and wrap your mind around the "stages" of feet we mentioned above. At the other end, still, at the back edge of the One2 Mini, we found the USB Type-C port that accepts the detachable cable for power and connectivity. For obvious reasons, we like the use of Type-C, as it will eliminate any fumbling around with the cable to plug it in.

The bottom of the keyboard matches the sides, with its vast expanse of bright red, shiny, plastic! Without the extendable feet at the back in play, the One2 Mini rests upon the four long but narrow feet, two at the front, and two at the back. On the laser-etched metal nameplate found under our One2 Mini, we got number 3637 of 3700 keyboards. There are the model and serial numbers also present, Kingston company information, as well as addresses for both HyperX and Ducky at the bottom. In this image, we can see both of the feet found in the corner, which allows for a total of three usable heights for the One2 Mini RGB. Both feet are made of black plastic, and both have a thick rubber foot at the ends, ensuring the keyboard does not move around. You may also notice the four dip switches, which are all currently turned off. The first one is for the Windows key, where off means it is functioning. Number two switches between off as NKRO mode, where on means you are in 6-key mode. The third one allows you to use the Ducky Vendor ID (VID), or when it is on, it is customizable. The last of them, switches between standard and display modes. As the last page did, we figured we would end this with the front view of the duck. From this angle, we can see both of the ear cups, his surprised expressions, the HyperX name on the t-shirt, and a hint of him holding something. 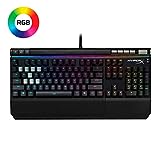