The 8GB of RAM will give it some of that magical "future-proofing" that I hate to even refer to, but 8GB of framebuffer is definitely better than 4GB. Would you pay more for it? For esports games no, for AAA games -- maybe. That comes down to the games you're playing, and how much VRAM they consume (and of course, how much you want to spend on a graphics card). 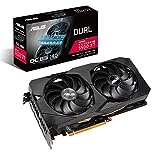