SilverStone is no stranger to our chassis reviews, they over the years have given us some excellent cases along with some that are not always our favorite. The Lucid series, as we have today, is designed to be beautiful showpieces which still being engineered for optimal performance as well.

As mentioned, the Lucid series is designed to have an artful elegance while sustaining the performance and quality we have come to expect from SilverStone. The LD01 is the mid-tower we have today, which has triple tempered glass surfaces on the front and both of the main panels.

Key features for the LD01 as displayed by SilverStone's webpage are as follows:

The LD01 is quite diminutive chassis, so to see a reasonably stout feature list is admittedly exciting. The support for two 240/280mm radiators is an interesting one as the inverted motherboard mounting means that a top-mounted radiator would be competing for space with installed expansion cards. The chassis, as mentioned previously, is the Lucid Series LD01 or LD01 for short. The part number is simple enough at SST-LD01B, with B signifying the black model which we have today. The suffix changes based on the color option in most instances for SilverStone chassis. The LD01, as far as we can tell, is only available in black with dark smoked glass. The chassis is designed for mATX motherboards, so it is a bit smaller than you may be used to. The LD01 measures in at 390mm high. 431mm deep and 218mm wide. The width should not be much of an issue, being that the chassis is inverted, so a top-mounted radiator would not interfere with RAM.

Motherboard fitment, as mentioned previously, is locked to mATX, with the smaller mITX also being able to fit here. HDD and SSD fitment reaches to 3x 3.5" drives via the HDD cage below the shroud, along with 2x 2.5" trays on the rear of the motherboard tray. The PSU could fit up to 220mm if you were to remove the drive cage entirely. You are better fit to have a PSU around the 140-160mm range if you plan to use the cages to leave room in the front for a 240mm AIO or radiator for cooling. The PSU, even though the chassis is inverted, still has a shroud at the bottom, and it has a passthrough for cables to reach the GPU or motherboard.

Cooling fitment for the LD01 is quite impressive for a chassis of this class and size. The LD01 is stated to support up to two 240 or 280mm radiators, but that depends heavily on other components such as HDD cage placement and expansion card installation. Fan fitment is similar as the top and front can fit dual 120 or 140mm fans while the exhaust fan is fixed to 120mm fitment should you want to place a fan in this position or even a single 120mm radiator or AIO. Air cooling CPU cooler height is limited to 168mm, which means larger air cooler would fit without issue. The LD01 does not include any fans, which means users need to plan on purchasing fans along with the chassis for their build. Do note that if you are installing a front-mounted radiator, SilverStone advises limiting thickness to 55mm or less.

The SilverStone LD01 comes to market at $114.99, the only models that come within this price point and form factor is a scant few. Namely, the Enthoo Evolv ($122.00) from Phanteks and the Fractal Design Node 804 ($109.99). A less known model, such as the Rajintek COEUS ELITE ($119.90), also falls into this area. The Phanteks includes two 140mm fans while the Node 804 comes with triple 120mm fans preinstalled. So when considering the value after the full analysis. We will have to take the inclusion of fans into the value portion of the assessment. 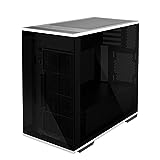