Large-capacity low-cost SSDs are the Big Foot of the SSD market. Every now and then, someone claims to see one but upon closer inspection, something else is afoot.

Patriot's P200 series isn't just about the massive 2TB capacity model but it's certainly the most interesting. The 2TB drive is the only one in the series to use the new Maxio MAS0902A controller. The 1TB, 512GB, and 256GB capacities in the P200 series ship with the Silicon Motion, Inc SM2258XT, a controller we've tested in a number of SSDs in the past.

The largest capacity sells for just $189.99 and even in the middle of a NAND glut; this is a really good price for a solid state drive. Most SSDs we see at this price point use 4-bit per cell flash (QLC) memory technology and not 3-bit per cell (TLC).

The P200 does have one design flaw that enthusiasts will not appreciate, but it's also what helps Patriot to get the price so low. The series omits DRAM memory used to cache the flash translation layer (FTL) map.

This is where the comparison to Big Foot comes in. Windows needs to know where every piece of data is on your storage devices. For decades that meant hard disk drives (HDDs). Data is sent to the drive, Windows knows where it goes for obvious reasons, it needs to read the data when asked, delete files when you tell the OS to do so and so on. SSDs and even some modern HDDs don't follow the Windows map. These devices have shuffle data around for performance, endurance and other reasons. The flash translation layer is the decoder map between where Windows thinks the data is, and where the drive knows the data actually is.

DRAM, either DDR2, DDR3, or DDR4 is faster but also more expensive than flash. Modern SSDs use a simply formula of 1 megabyte of DRAM for every 1 gigabyte of flash. There are a few exceptions but this is the standard. The DRAM allows the controller to access the map faster and a larger amount of DRAM means more data fits in the faster access area. Imagine looking at a map of the United States and in the first view you can see the entire country. Someone calls out a state, say Iowa. I hope that you can point out Iowa quickly with the full map in your field of vision.

DRAMless SSDs don't use the large DRAM to cache the map. These controllers feature a small, high-speed cache on the controller usually made up of SRAM. The rest of the map is on the slower flash. Now imagine someone calls out a state. In this case, we can see only see Iowa and parts of the surrounding states. The state you need to find is Maine and even though you know where Maine is on the map, you have to move your field of view to find the state and that takes more time than when you can see the entire map at the same time.

The additional time, in computing terms, is latency. Latency or the time it takes to access the data is what makes solid state drives faster than hard disk drives. DRAMless SSDs are still faster than HDDs, but they are not as fast as drives with the DRAM buffer. The reason why we rarely see 2TB DRAMless SSDs is because the more data the drive holds, the larger the FTL map.

The Patriot P200 is the first 2TB DRAMless we've ever tested. It will be interesting to see how the drive fairs against the other 2TB SATA SSDs we've tested over the years.

As we mentioned in the introduction, the Patriot P200 ships in four capacities ranging from 256GB to 2TB. The three smaller capacities use the proven Silicon Motion, Inc. SM2258XT controller. We've tested this controller with Micron 64L TLC memory in the past and found the combination works well together for mainstream users shopping on a responsible budget.

The 2TB model we're testing today differs from the other sizes. This drive uses the Maxio MAS0902A controller. This is the first time we've tested this controller and we are excited to see how it performs with Micron's 64L TLC.

Patriot backs the P200 series with a solid 3-year warranty that is limited by the amount of data you can write to the drive. The 256GB drive covers up to 160 terabytes written (TBW). That doubles to 320 for the 512GB drive and then doubles again to 640 TBW for the 1TB drive. The 2TB model hits a wall at 1,000 TBW so it doesn't double again like the other sizes. 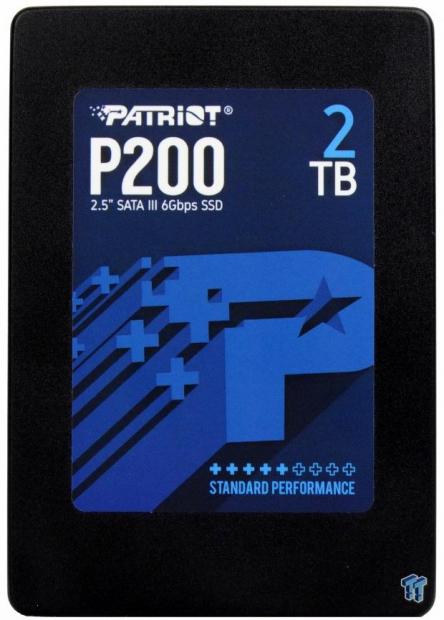 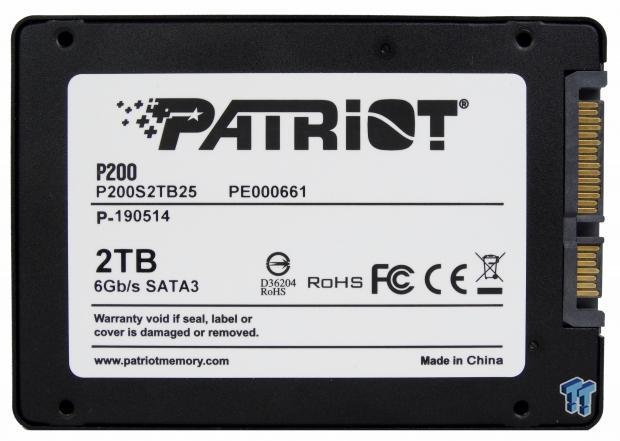 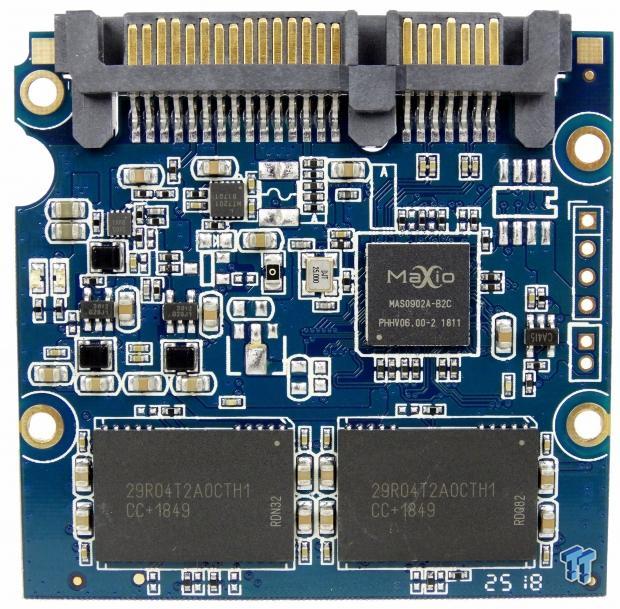 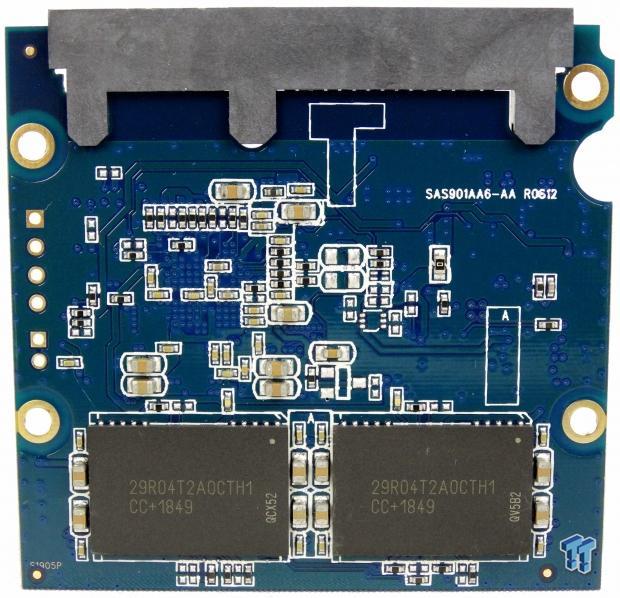 The 2TB Patriot P200 needs a heavier workload to reach peak throughput performance. It's common for flash-based drives to need more work to reach the highest performance possible but the P200 requires more than others to surpass 500 MB/s. Another way to say this is the P200 is slower than most other SSDs with a one, two and four files read from the drive at the same time compared to the other drives in the charts today.

You will quickly notice a lack of diverse 2TB products in our charts today. We've brought in the leading 2TB options from our lab and they all feature DRAM for the flash translation layer. The P200 isn't the first 2TB DRAMless SATA SSD, but it's one of the first to become widely available.

With so much data to keep track of, large DRAMless SATA SSDs show inconsistent write performance. What we see is similar to the early planar (2D) TLC SSDs when it comes to the quality of service.

You can see the inconsistency in our sequential write across the entire user available space of the P200. To increase endurance, the P200 uses the data fold method. All incoming data must first pass through a SLC cache and then "fold" into the TLC. On large data writes, the fold and the still incoming data can butt heads for resources. That shows up as the larger dips or declines in performance as the fold takes place and the peaks show when ample cache is again ready to accept incoming data at a higher pace.

Smaller block sizes often associated with random data make more calls to the translation map. This data feels the full impact of not having the map cached in a high-speed module. The 2TB shows very low QD1 random read performance. This is around half of what we like to see with modern SSDs.

The random write performance is also low for SSDs but the SLC cache on the flash works to keep the small burst writes very high compared to hard disk drives.

I like to say that latency builds more latency. When one IO has to wait on the previous to complete the latency stacks and influences performance. That is what we see here in the sequential mixed workload test. The other drives, all with DRAM, increase throughput as we increase performance. The Patriot P200 loses performance through most of the queue depth range.

With random mixed workloads, the 2TB P200 steadily increases performance as we ramp up the workload. The drive starts at QD2 at less than half the performance of the other drives though. 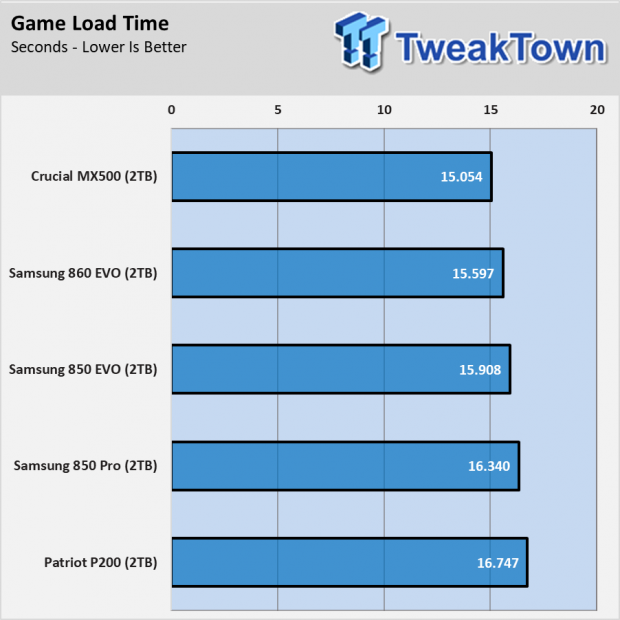 On the following pages, we move to real-world applications. We don't expect the P200 to outright win any of the performance comparisons against this competition but the drive carries such a low price that many will accept the performance compromise to gain capacity.

Keeping costs in mind, how much does less than two seconds cost loading a video game? The 2TB Patriot P200 loads the five Final Fantasy: Stormblood levels in just under 17 seconds. The 2TB MX500 does it in just over 15 seconds. 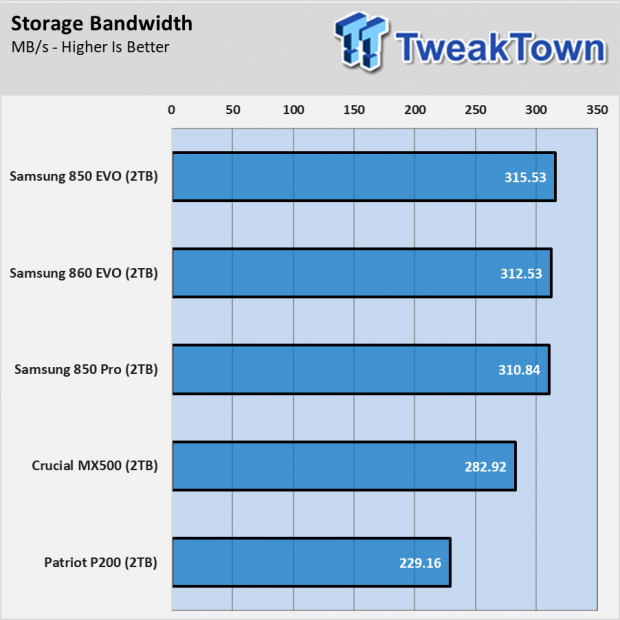 The UL PCMark 8 Storage Test uses a wider range of applications to test the storage subsystem. The 2TB P200 scores nearly 230 MB/s in the ten tests using nine applications. This is a massive improvement over the fastest hard disk drives and still very close to the powerful Crucial MX500. 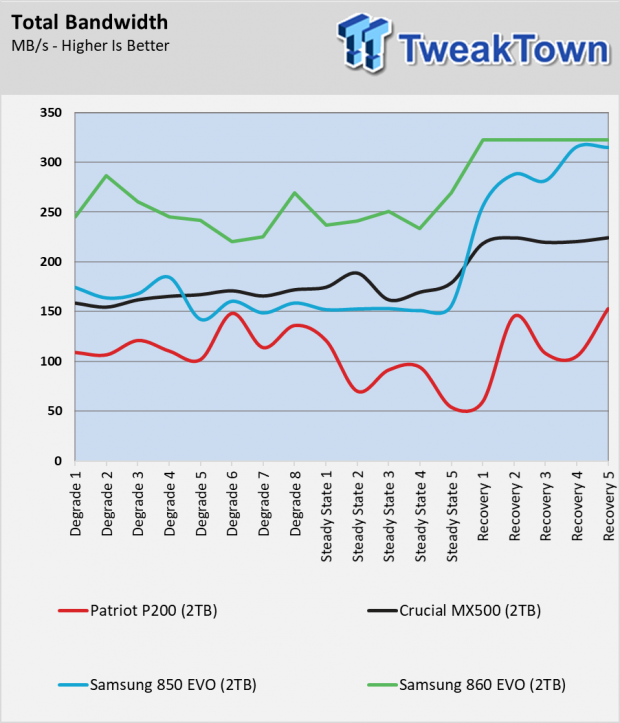 The Patriot P200 is not the drive you want to use under heavy sustained workloads. 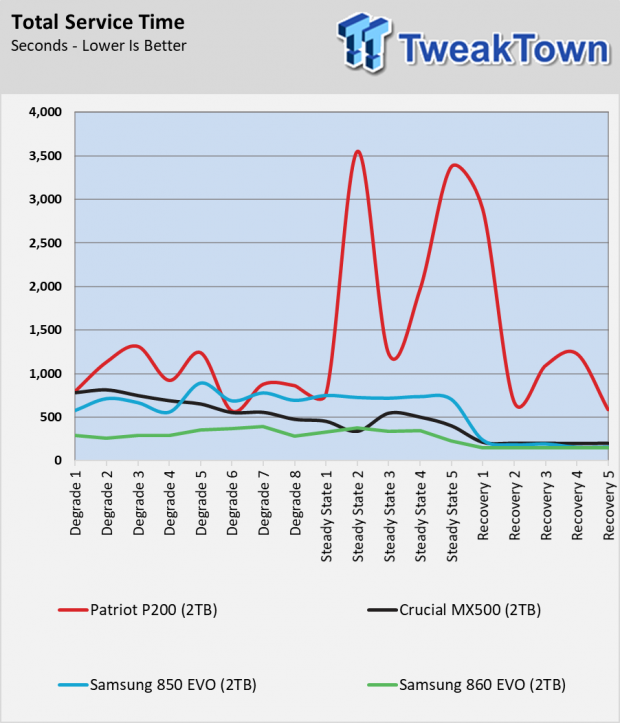 The service time results show us how the latency can build and cause a massive spike under heavy workloads. The drive recovers but takes longer to reach steady performance again compared to the other drives in the charts. 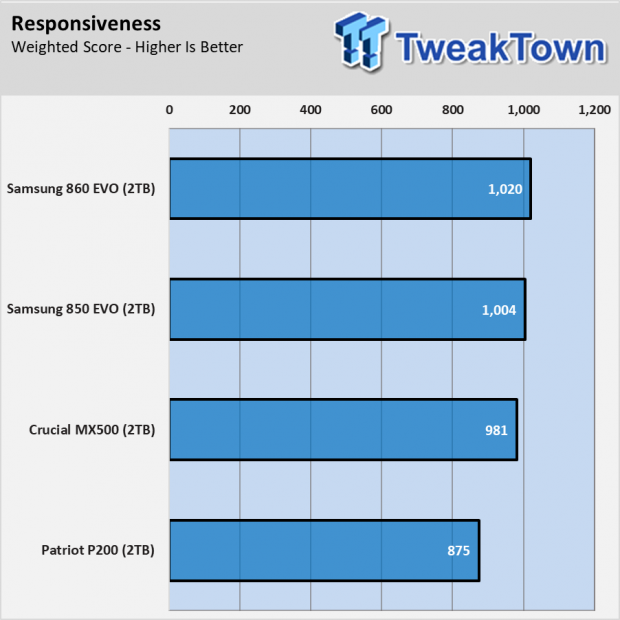 With an operating system and the applications used to run the SYSmark 2014 SE suite, the 2TB Patriot P200 scores one as the lowest SATA SSD we've tested in a number of years in the responsiveness test. This is why we feel this drive is better suited for mass storage as a secondary drive rather than your boot drive. 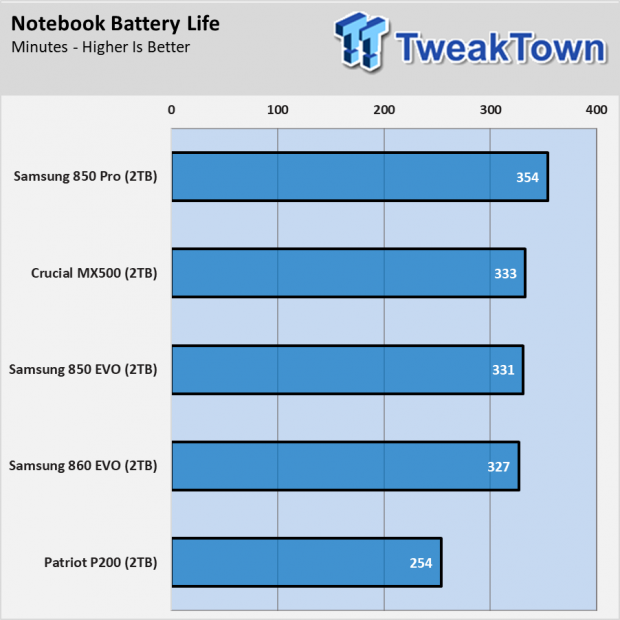 On paper, DRAMless SSDs appear to have a power advantage over drive featuring the high consumption component. DRAM requires constant power to hold data so even when the SSD is in a low power state, the DRAM is a drain. For several years leading up to the introduction of these drives coming to market, SSD controller designers claimed notebook battery improvements.

We quickly learned with shipping products that the lack of a cache for the translation map meant the controller and flash had to work longer to write data. This affected the background activity completion time, the data movement that you don't see but happens to keep the drive fast and long lasting.

The 2TB P200 is one of the few SATA SSDs unable to deliver 5 hours of office productivity in our Lenovo Ideapad Y700-17 system.

The 2TB Patriot P200 is a unique product that is unmatched and unrivaled. There is a reason for both that shoppers should be aware of. SATA DRAMless SSDs don't have the ability to use the system memory to cache the flash translation layer like NVMe drives using Host Memory Buffer technology. Amazon and Newegg is full of DRAMless NVMe drives in large capacities but there are very few SATA drives like the 2TB P200.

Patriot did a really good job with the components available to get the 2TB P200 to market. The drive performs a big better than I expected in some places. This is clearly a value product for budget-minded shoppers struggling to make the move to flash from hard disk drive technology.

For most users, the 2TB P200 makes a far better cold storage drive than an actual boot drive. The latency that can mount under mainstream workloads and light multitasking can make this model feel less responsive compared to an older SSD it might be replacing.

If you only real options are 2TB of HDD storage or the 2TB P200, we will choose the flash drive every time even if it is a DRAMless model. Most shoppers are not that limited when it comes to options. The 2TB P200 has a massive cost advantage compared to Samsung consumer drives and Crucial's MX500 but the gap will quickly shrink. When we started writing this article the difference between the 2TB P200 and MX500 was $40. At the end of the article a few days later the gap closed to just $20 on Amazon. The performance difference in throughput, latency, and battery life is worth spending a little more to gain.

If you absolutely need the lowest priced 2TB SATA SSD the Patriot P200 is your go-to option. If you can spare to spend a little more, there are significantly better large capacity drive available.