The Mushkin Pilot-E is the other SM2262EN high-performance NVMe SSD. The company started talking about the drive when ADATA and HP displayed the SX8200 Pro and EX950. Those drives have been on the market for what seems like ages now so Mushkin is a little late to the party. 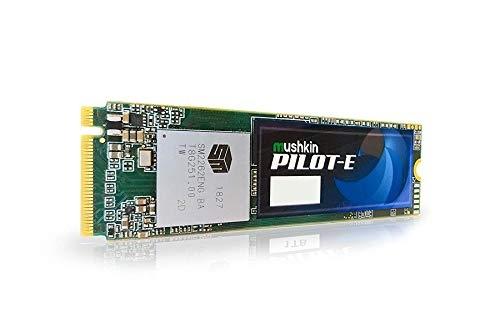 The Pilot-E is the flagship NVMe product from the company. It plays an upmarket role to the Helix-L we previously tested. Both drives use Silicon Motion, Inc. controllers. The Helix-L uses the SM2263XT DRAMless controller, and the Pilot-E uses the mighty SM2262EN, the successor to the successful SM2262 that took on Samsung for consumer NVMe dominance.

Even though Amazon and Newegg both carry the Pilot-E, Mushkin still doesn't have the series listed on the official website. The company sent us a full specification sheet to get the fine details right, like endurance and random performance, not listed on some of the reseller pages.

The Pilot-E is one of the few consumer-class NVMe SSDs with support for TCG Opal encryption. This includes the other two popular SM2262EN drives that do not support this feature. For most games, full disk encryption acceleration is not a top priority but for business users especially notebook users, this is an important, and in some cases, a critical feature.

Prices differ quite a bit between Newegg and Amazon at the time of writing. Neither site lists all three capacities in stock, but you can find the 1TB available on both with Amazon showing the lower price by nearly $40. Newegg shows the 2TB model, but it's not in stock while Amazon doesn't list the 2TB Pilot-E at all.

Mushkin back the Pilot-E series with a 3-year warranty. This falls two years shy the ADATA SX8200 Pro and HP EX950 NVMe SSDs using the same controller and memory.

A Closer Look and Where It Goes Wrong 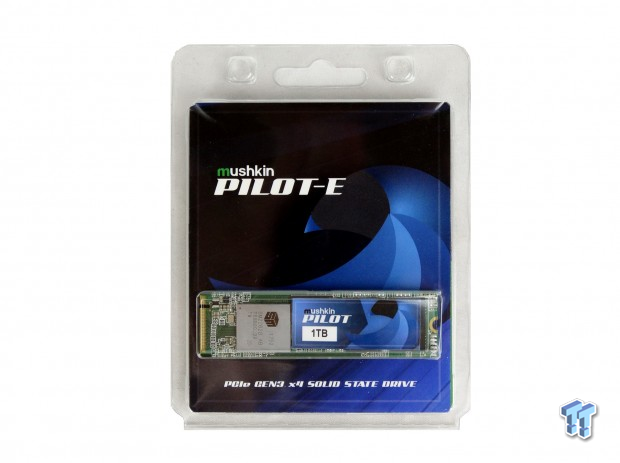 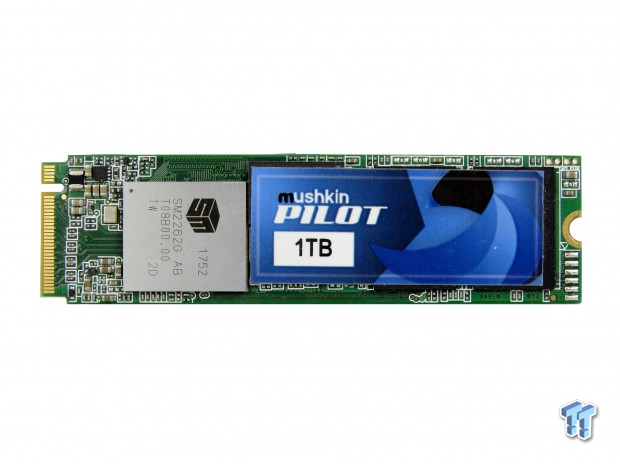 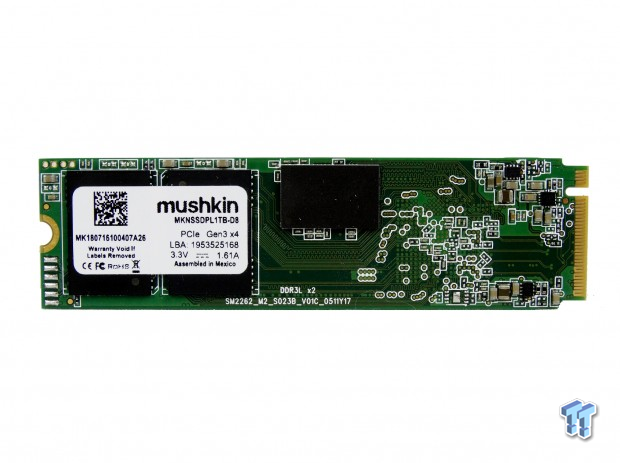 Mushkin went conservative with the product packaging. The Pilot-E ships in a simple blister pack with some generic information about the drive.

The drive itself is close to the standard reference design we tested from Silicon Motion, Inc. during the preview stages.

Given how long the SM2262EN controller has been on the market, we won't see too many surprises today. We suspect the Mushkin Pilot-E uses a newer firmware compared to when we tested the SX8200 Pro and EX950 since there are some subtle differences in performance here and there.

The sequential read performance hits the same 3,500 MB/s, the same as the other top tier drives shipping today. The queue depth (QD) 2 performance is a little lower than some of the others due to a slightly slower ramp up.

The red line from the Pilot-E is barely visible on the line chart. The BPX Pro, SX8200 Pro, and EX950 lines hide the Pilot-E's sequential write performance. The drives all overlap step-for-step across the queue depth range.

In this test, we use a sustained 128KB write across the entire user area of the drive instead of measuring burst performance. The three SM2262EN controlled drives show very similar performance as you would expect.

The 1TB Pilot-E doesn't break into the 18,000 IOPS range at QD1 random read, but it comes very close with a strong 17,455 IOPS. The drive scales well as we increase the workload. This performance should relate well to some of our real-world performance tests like gaming, and system responsiveness.

The Pilot-E is down slightly in random write performance as well compared to the two previously tested SM2262EN SSDs. The difference between the three drives is within the margin of error, so we're not too concerned. At these speeds, a few IOPS doesn't matter much because the latency is already so low.

The 1TB Pilot-E takes a different path up the queue depth range in the sequential mix test compared to the two previously tested SM2262EN drives. The Mushkin drive shows higher peak performance at high queue depths but trails the others at low queue depths.

The Mushkin Pilot-E uses the very high random read performance to stay in the top three positions in the random mixed test at QD1. This is great news for gamers and those who multitask consumer applications.

In the next few pages, we move to real-world applications starting with Final Fantasy: Stormblood, a game with a built-in load time test. The 1TB Pilot-E takes the second spot in the game load test trailing the EX950 by less than a second. This is very close to what we expected from the drive that shows strong random read performance in our synthetic tests.

With the workload spread to nine different consumer and prosumer applications, the 1TB Pilot-E falls to the middle of the performance chart. This is one of the few surprises in the testing with the drive.

The PCMark 8 Extended Storage Test shows similar performance in the recovery phases that we observed in the previous chart. The Pilot-E does trail the other SM2262EN drives in the nine applications. The performance under heavy workloads is similar, but less consistent.

Mushkin changed something in the design that affects the cache system of the Pilot-E compared to the SX8200 Pro and EX950. In our responsiveness test taken from the BAPCo SYSmark 2014 SE software, the drive trails the two other SM2262EN drives by quite a bit. The performance inconsistency from the PCMark 8 Extended Storage Test was the precursor to this conclusion, but we also saw a few differences in performance in the synthetic performance tests.

Even though we've spotted some small differences in performance, the Pilot-E still delivers more than 5-hours of battery life in our Lenovo Y700-17 gaming notebook. This is about average for NVMe SSDs shipping today.

The Mushkin Pilot-E is just now really coming to market, and that poses a few issues that impact this review. The first is the tech-pricing decline that naturally occurs. At this time, the ADATA SX8200 Pro and HP EX950 both sell for right around $130 for the 1TB capacities. The Pilot-E hasn't been online long enough to "adjust" from the MSRP, so it costs around $10 more. 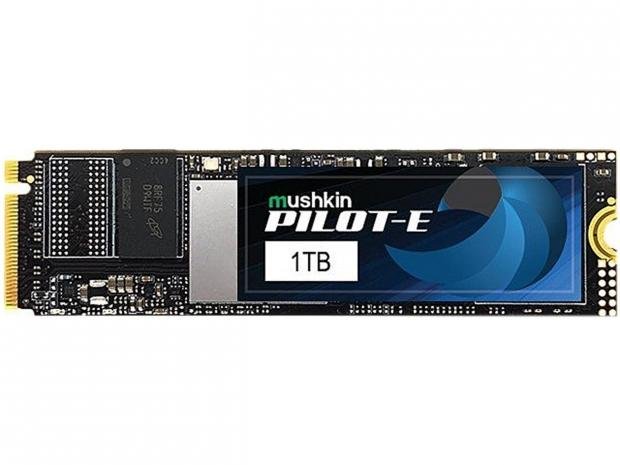 If we just had a small pricing issue that would (potentially) sort out over the coming weeks, we wouldn't have much of an issue at all. Sadly, other hurdles make the Pilot-E less desirable than similar products on the market today. The Pilot-E ships with a three-year warranty when other flagship products, hell even several mainstream NVMe SSDs, ship with a five-year warranty. The warranty is a much larger issue for many shoppers than we usually make it out to be in most reviews. When a drive is on the wrong side of the line, it doesn't go over well with many shoppers.

Mushkin failed to do anything exciting with the Pilot-E even though the company had ample time to spruce the flagship up. The SX8200 Pro and EX950 get most of our attention, and both use the same basic design with a bare drive, although the SX8200 Pro does ship with a thin metal strip cooler/shield. HP hasn't done anything to build a "special" model, but we've lost count of the different models from ADATA's XPG design team with similar 3500/3000 MB/s performance including the Gammix S11 with the SM2262EN controller.

The lack of "fancy" designs doesn't come as a surprise. Mushkin knows its place in the market has a formula and follows it. That usually includes equal performance across the board and a slight price advantage. The Pilot-E misses the mark in both (current) pricing and performance.

Most of Mushkin's SSD designs focus solely on "gamer" features that often carry over to other user types. The Pilot-E does add support for TCG Opal for business and notebook users. This is a big win for a very small slice of the market. Gamers often don't encrypt drives with Opal but businesses rely heavily on the software in notebooks and desktops to secure data should a drive go missing. Very few consumer-focused NVMe SSDs support the advanced encryption technology. Samsung tries to make this a standard feature on most high-end consumer products. It's nice to see Mushkin add the feature to the Pilot-E series. Our research tells us the Pilot-E is the lowest-priced high-performance NVMe SSD with Opal shipping today.

If Mushkin lowers the price enough of the Pilot-E to compensate for the slightly lower performance and shorter warranty it could be a strong value for shoppers. We expect to see some adjustments as the series hits the market in full force. There are so few drives shipping right now we can't call this the full release. Expect to see more 500GB and even 2TB Pilot-E drives shipping in the near future and hopefully by then the series becomes a better overall value for shoppers like most of Mushkin's other SSDs.

The Mushkin Pilot-E doesn't offer the same value as some of the other SM2262EN controlled drives, nor the exact same performance. This is still one of the faster NVMe SSDs shipping today, but there are better options available.