Now that the other flash fabs have nearly equaled rival Samsung's V-NAND in performance, most companies now have the ability to build low-cost consumer products that compete for the performance crown. Samsung still has an advantage in NVMe performance, but the bus limited SATA spec means you can get class-leading performance from a number of different drives and that helped to drive down costs. 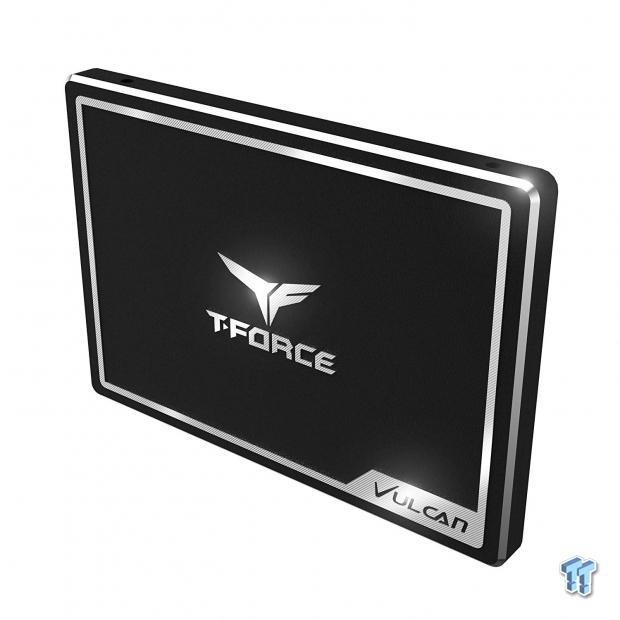 For third-party manufacturers, those without significant flash or controller IP, the winning combination is the Silicon Motion, Inc. (SMI) SM2258 4-channel controller paired with Micron's 64L or 96L 3-bit per cell memory. This combination is open to just about any company willing to write a check, and many have released similar models. The most well-known with this configuration is the Crucial MX500, but that is mainly because it was the first to market thanks to Crucial's direct access to Micron's flash.

The Team Group T-Force Vulcan follows the same path with the controller and memory but costs around $10 less. Let's take a look at the fine details and see what you get in the package.

The Team Group T-Force Vulcan series comes to market in three capacities, 250GB, 500GB, and 1TB. The company also has a Vulcan DRAM series that matches the design for those looking to build a themed computer or at least color match components.

The series uses the SMI SM2258 "G" variant 4-channel controller and Micron's mighty 3-bit per cell flash. As we've already mentioned, this is the same combination as the Crucial MX500, a SATA drive we often recommend when asked.

Team Group backs the series with a 3-year warranty, and that's a bit of a disappointment since most mainstream SSDs now ship with a 5-year warranty. 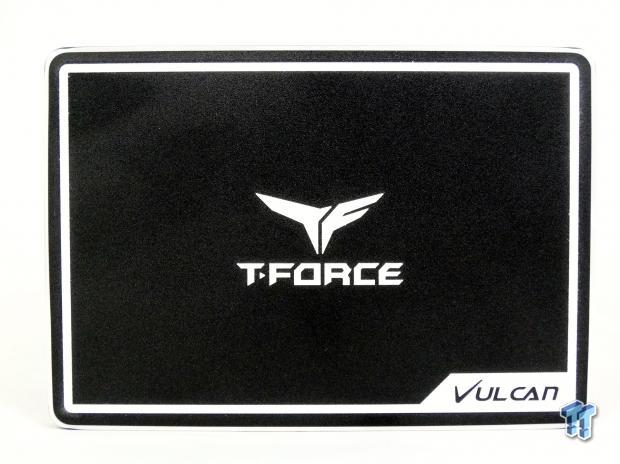 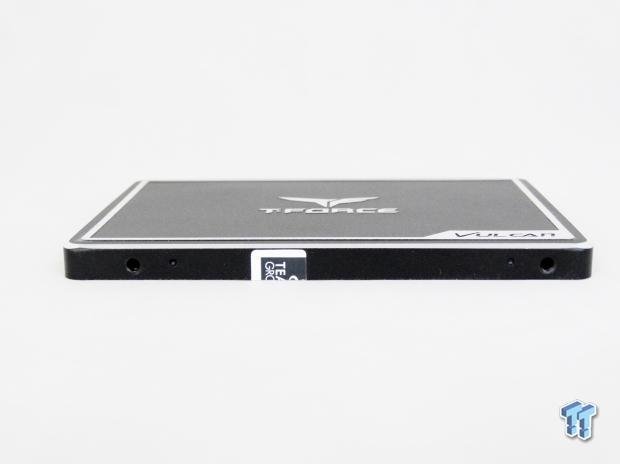 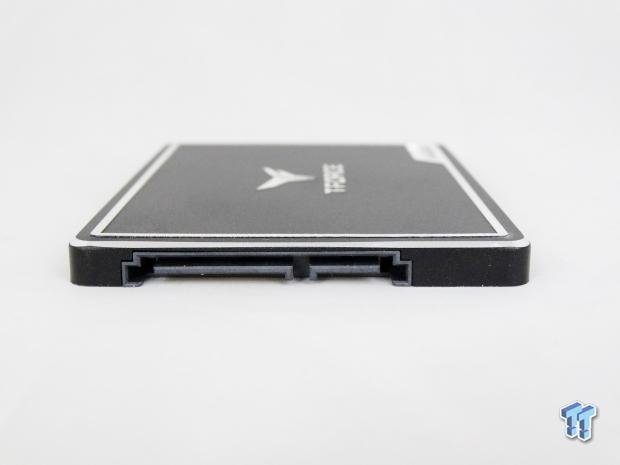 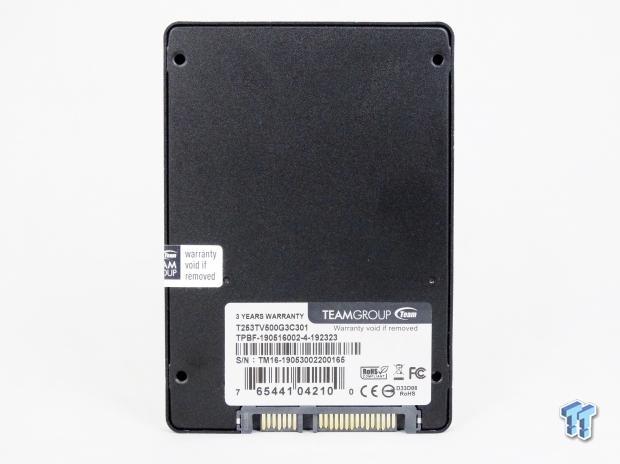 Team Group put together a nice package for the Vulcan, and the drive looks great. The controller butts against the aluminum chassis to aid in cooling, but the SM2258 doesn't run very hot to start with. The extra cooling does help with heavy sustained workloads. This is a consumer drive first and foremost that replies on heavy SLC cache so most users will rarely throw a sustained workload against the drive. 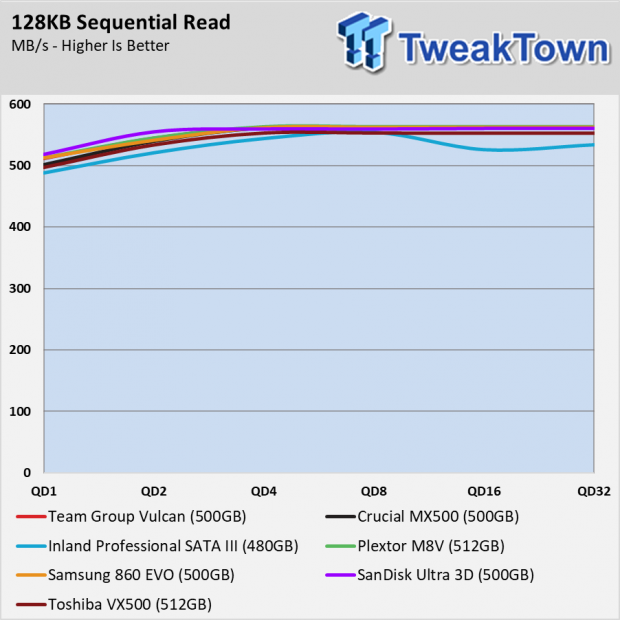 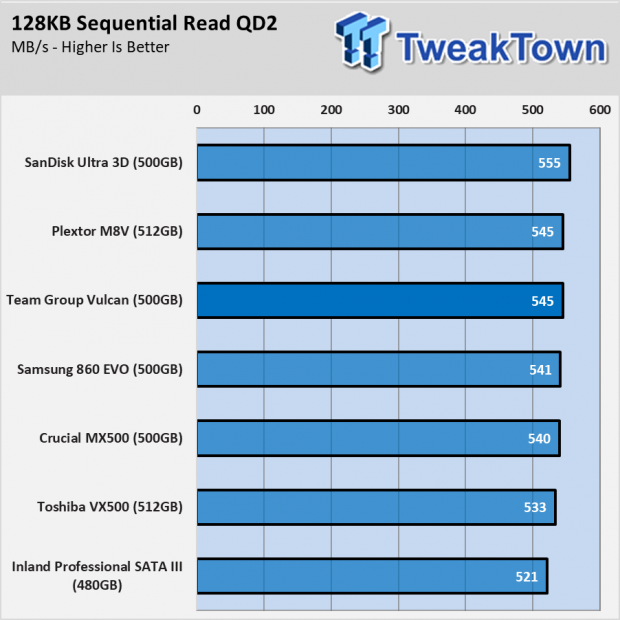 It's easy to spot that most SATA SSDs deliver very similar sequential performance. The 500GB Vulcan uses the exact same path as the 500GB MX500. You can't even see the Vulcan line other than at QD1 because the two lines overlap through the queue depth range. 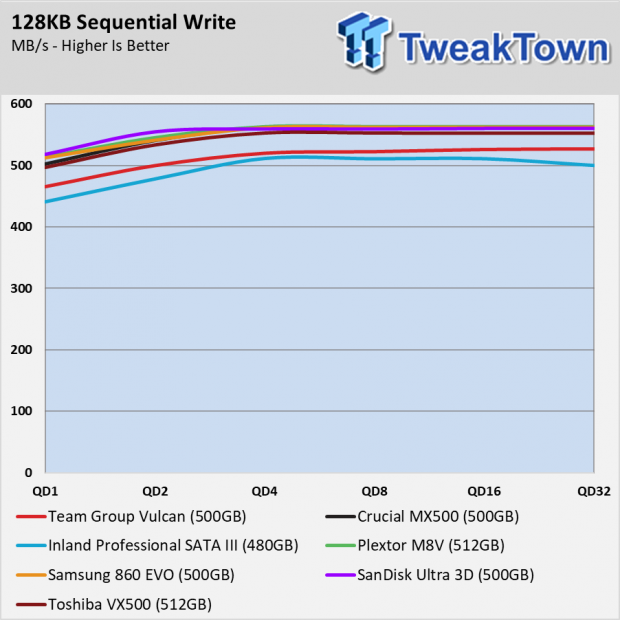 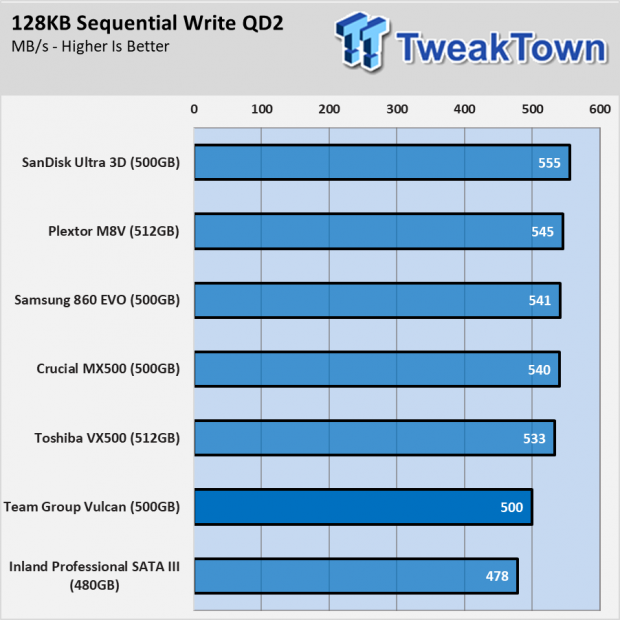 Performance differences start to appear in the sequential write test. Most drives still follow the same path through the queue depths range, but the Vulcan is slightly lower than the majority of the others. 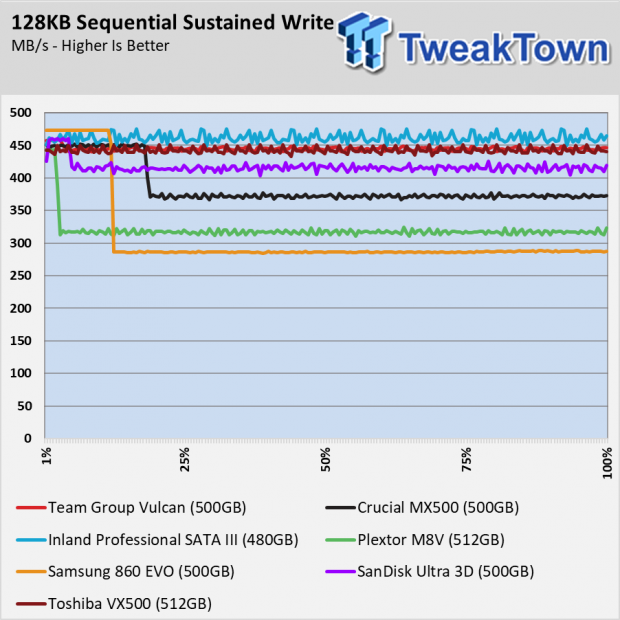 The SM2258 controller uses dynamic cache for the SLC buffer. It will run as much of the flash in SLC mode as possible, but the buffer will shrink as you fill the drive with data. 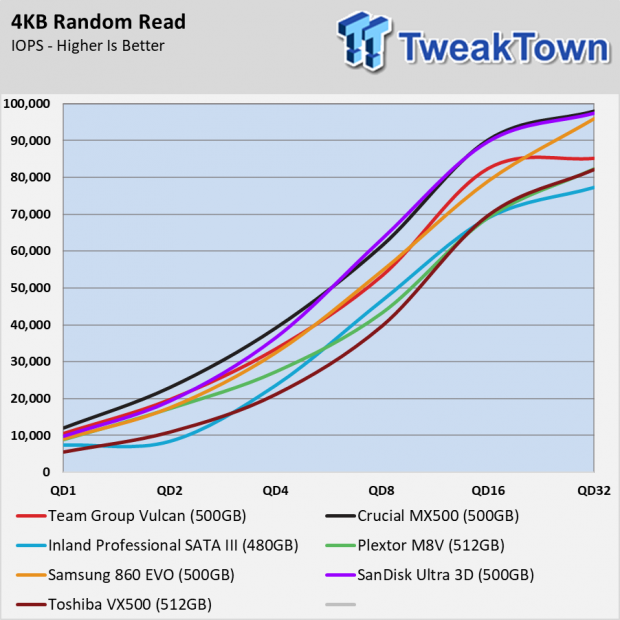 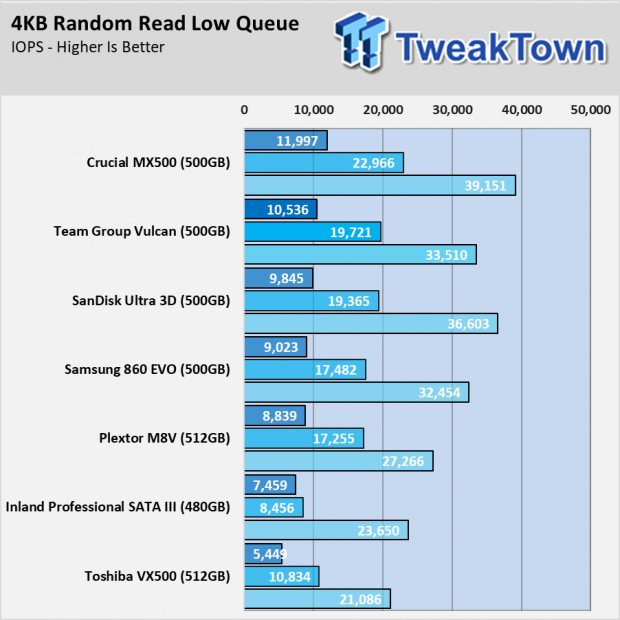 Both the MX500 and Vulcan use the same number of Micron 64L 256Gbit 64L die. The MX500 splits the die among eight packages, but the Vulcan uses just two packages to reach the same 500GB capacity. The Vulcan loses some penalization used to increase read and write performance.

You can see how that works in the random read performance chart. The bar chart shows both drives surpass 10,000 read IOPS at QD1 and that's a good thing. You will love how fast your computer feels with latency this low. When you move over to queue depth 4, the numbers look quite a bit different. The MX500 delivers nearly 40,000 IOPS, and the Vulcan musters just 33,500.

Most users will rarely reach high queue depths, and even QD4 will only happen in tiny bursts. This shows the difference between a drive completely optimized for performance, and one optimized for a lower price point. 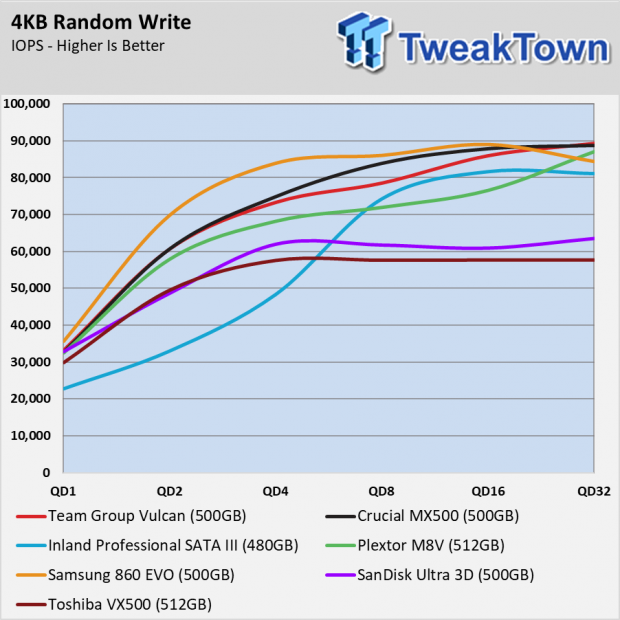 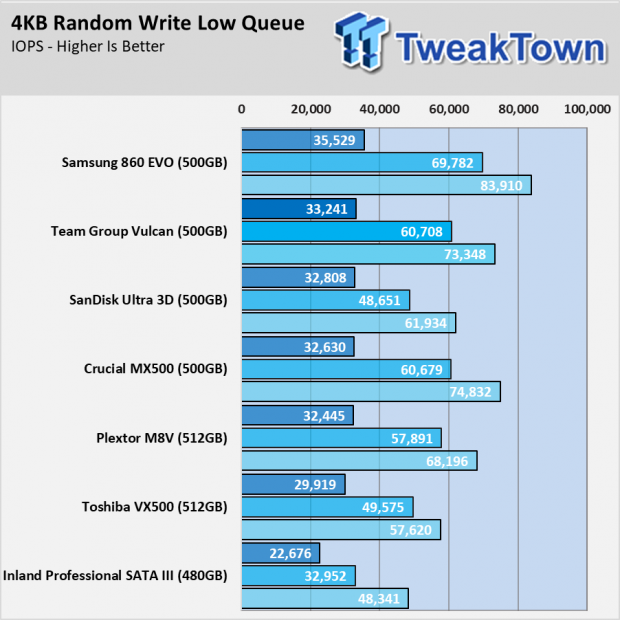 The random write test shows the exact same scenario with the MX500 performing slightly better at higher queue depths and the Vulcan meeting the MX500 at low queue depths. 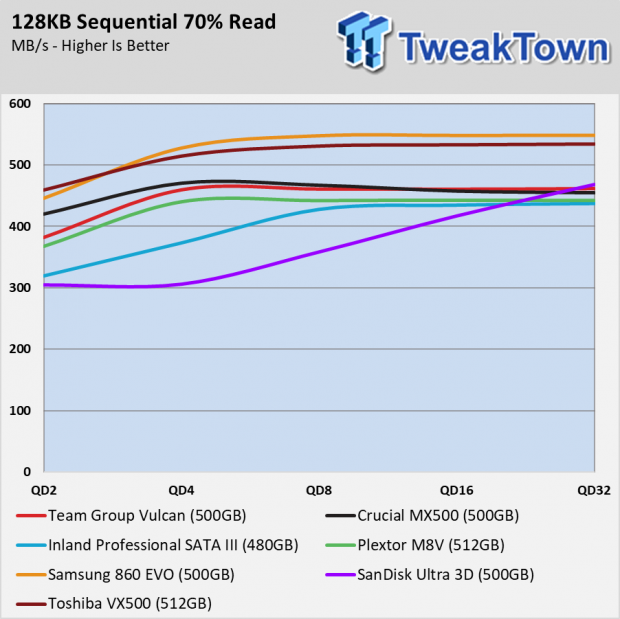 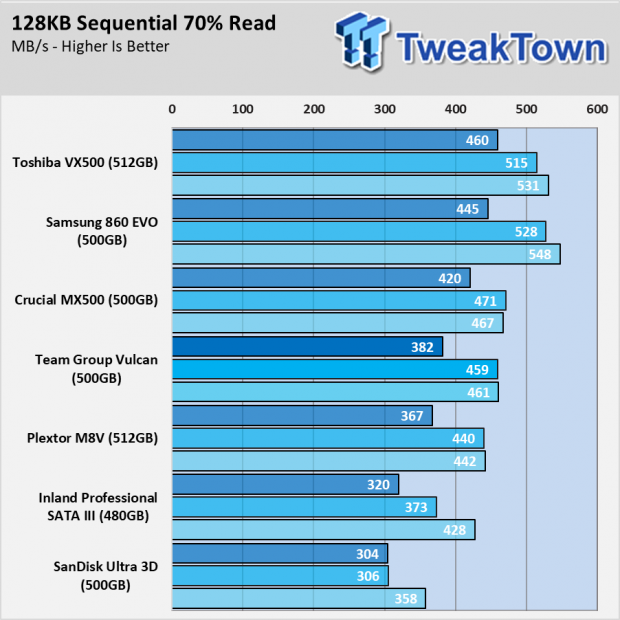 Most of your computing involves reads and writes at the storage level at the same time. Research has stated the consumer-level mix is 70% reads for most users.

The Team Group Vulcan again trails the MX500 at low queue depths in the sequential mix, but the two resume a parallel track at higher queue depths. 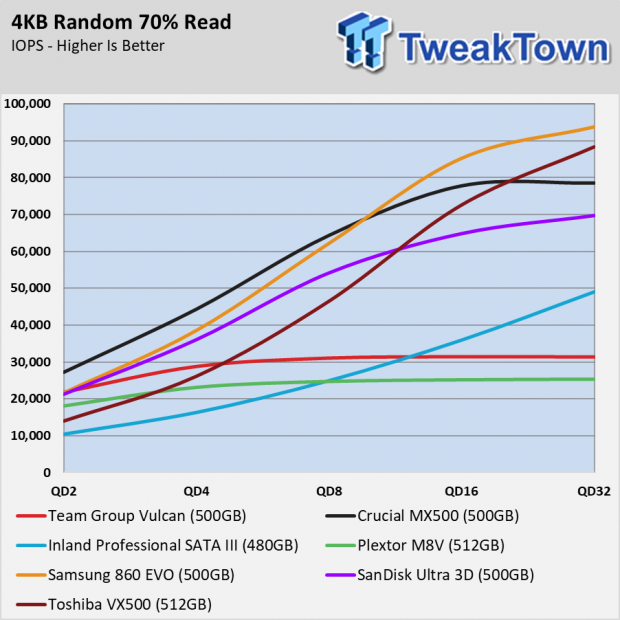 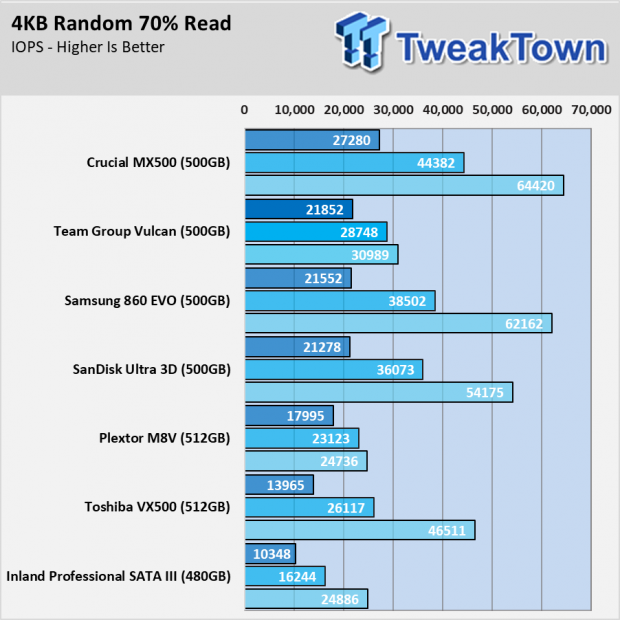 The one test where the two SM2258 drives differ the most is the random mix. The Vulcan doesn't scale well when we ramp up the queue depth in this mix. The drive surpasses 30,000 IOPS at its peak where the MX500 nearly reaches 80,000 IOPS. 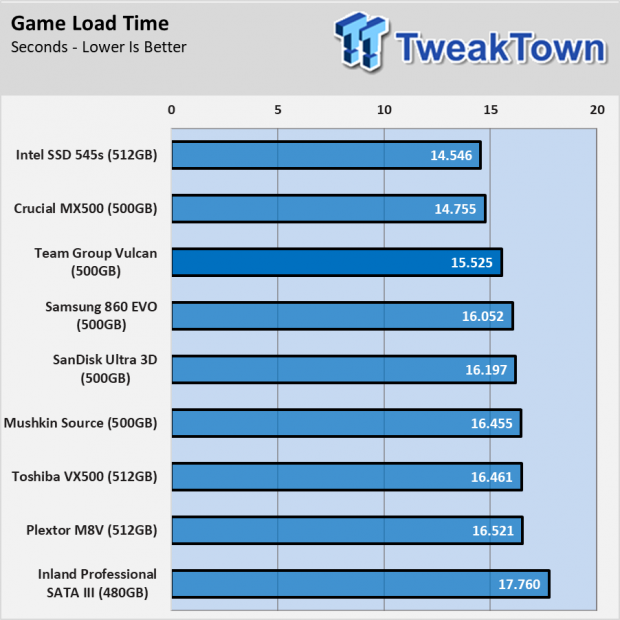 The Team Group T-Force Vulcan performs well but not exceptionally well in synthetic workloads, but that doesn't always carry over to real-world applications.

The drive performs really well in the game load test. We use Final Fantasy: Stormblood to measure the load times. The Vulcan is right on the heels of the Crucial MX500 and not far from the Intel 545s. 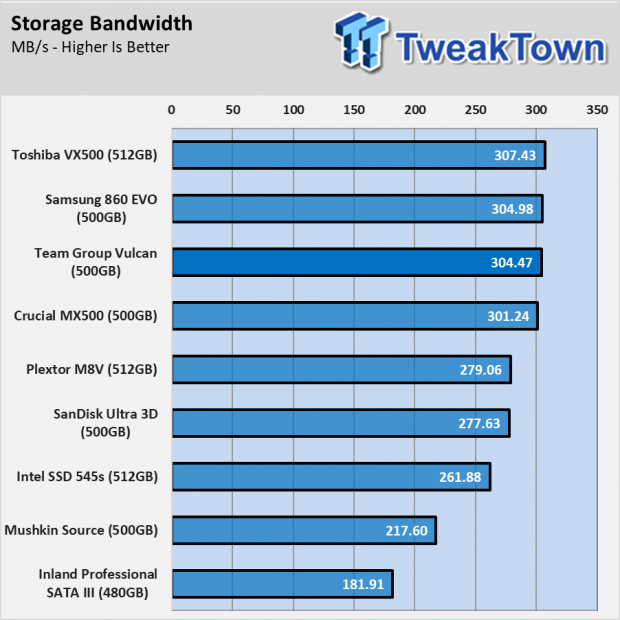 PCMark8's Storage Test uses nine common applications to run ten individual tests. This suite shows a broader range of applications including some short hits, like opening and editing a Word document, to a long load cycle with Photoshop. 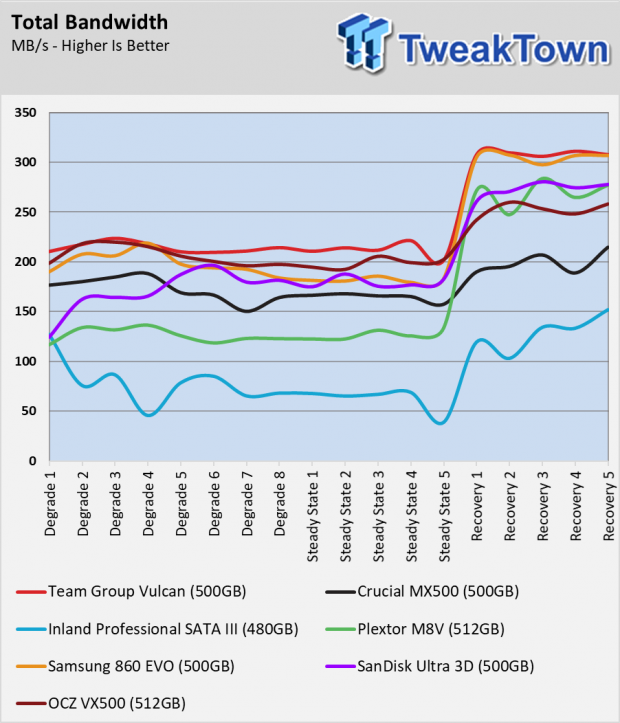 Where the drive completely surprised us is with extended workloads under heavy write conditions. The Vulcan outperformed the other SATA SSDS in the degraded and steady-state portions of the test including the Samsung 860 EVO. Come out of out the heavy write portion of the test; the Vulcan matches the 860 EVO through the recovery phases. 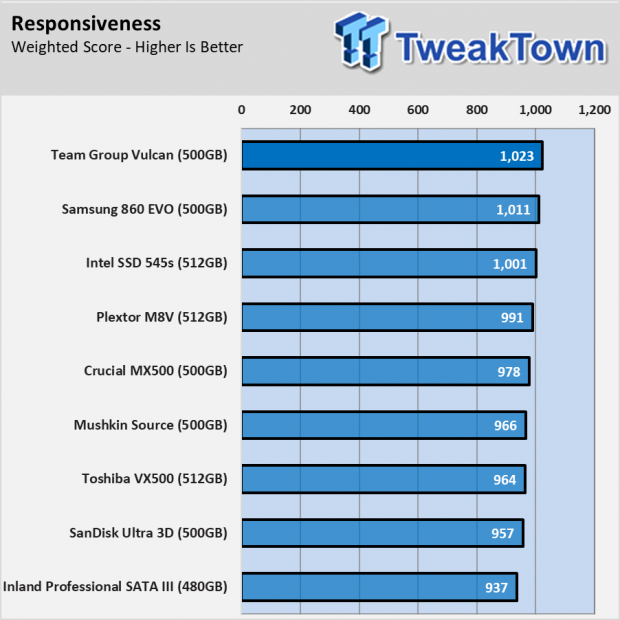 The 500GB Vulcan shattered the SATA SSD record for system responsiveness in the SYSmark 2014 SE test. The drive doesn't have the lowest latency under light workloads but has the ability to clean cells and handle background activities efficiently. This leads to a better user experience under moderate workloads like this office-focused test. 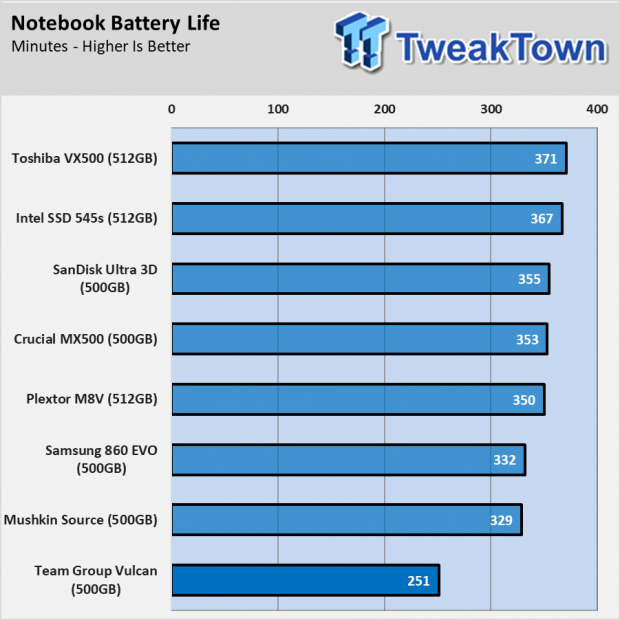 We can only assume that is why the Team Group Vulcan scores so low in our notebook battery life test using a Lenovo Ideapad Y700-17 gaming system.

The Team Group T-Force Vulcan is not a great all-around SSD, but it serves as an excellent choice for desktops. Most Vulcan shoppers are not ready to buy NVMe SSDs due to hardware limitation, or have already filled the NVMe slots with other drives.

With SSDs hitting record low prices, many desktops and even some notebook users have adapted the multi-drive strategy. This is when you use one drive for the operating system and other drives to hold applications like games, and "cold" data like pictures, videos, and documents. The Vulcan SSD works well in both roles, but as users adopt NVMe in higher numbers, low-cost SATA SSDs will transition to the secondary storage role.

The current $59.99 price for the 500GB model we tested sits in a good spot for users serious about performance. There are lower-cost drives available but the more you subtract from the cost, the deeper you get into DRAMless and other undesirable "features." The 500GB MX500 currently costs around $10 more, and you get nearly identical performance with the Vulcan making it a better buy for most shoppers.

We expected to see a better warranty on this series, but with the quick technology turnover in storage, most users will be fine with three years of coverage.

The Team Group T-Force Vulcan offers slightly better application performance compared to the Crucial MX500 but with a lower price.