Kingston brought out the Silicon Motion flagship controller and paired it with an unconventional memory combination for the KC2000. The drive delivers strong performance but lacks the full punch when paired with Micron TLC.
Buy at Amazon

Kingston's KC1000 was a great drive even though we didn't review it. The drive was the only Phison E7 M.2 SSD to ship worldwide in a 1TB capacity. An Asian region company fit 1TB of planar NAND on an add-in card but never sold the drive outside of China. In the modern 3D era, Kingston has shipped a number of strong products that compete directly with Samsung's consumer product line. Today we will look at the new KC2000, an NVMe drive designed to take on the best consumer high-performance models shipping today. 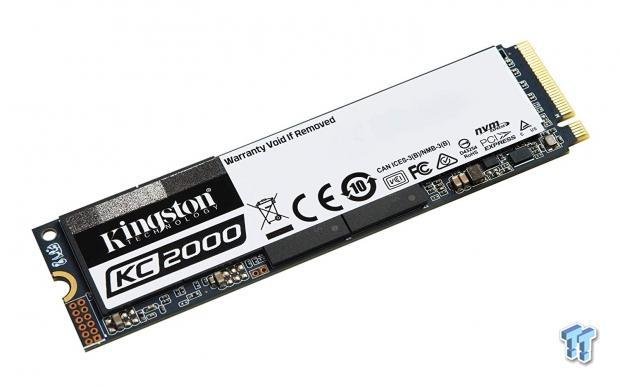 The KC2000 uses the Silicon Motion, Inc. (SMI) SM2262EN controller. This is the updated version of the SM2262 with an enhanced data path to deliver even faster write performance. This is the same controller used in the ADATA SX8200 Pro, and HP EX950.

Kingston didn't follow the other companies' playbook with the KC2000. This model uses Toshiba 96-layer flash instead of the Micron 64-layer memory found on the others. For quite a while now, we've sung the praises of Micron's 64L and 96L memory as products with it dominate many of our performance charts. The Micron 3D memory performs especially well in small block size random reads, the area we pin the user experience on for most consumer workloads.

We've only Toshiba's 96L BiCS FLASH memory in the XG6 with a proprietary controller and with early firmware. Today we get to see how the memory compares with Micron's and see if the KC2000 is worthy of your hard-earned dollar.

As we mentioned, Kingston tapped Toshiba's 96L three-bit per cell memory for this series, and that makes it unique to other drives shipping with the SMI SM2262EN controller. To contrast, the two memories, the ADATA SX8200 Pro with the same controller and Micron flash rates at 3,500 MB/s sequential reads and 3,000 MB/s sequential writes. The random performance is 390,000 IOPS read and 380,000 IOPS write. The KC2000 comes out slightly below the SX8200 Pro, but peak numbers rarely relate equally to real-world performance since consumer workloads rarely surpass low queue depths.

Kingston backs the KC2000 series with a lengthy 5-year warranty and ample endurance to match. The endurance for the four capacities matches Samsung's 970 EVO Plus.

Pricing is a bit of an issue. When we first started this review, finding the KC2000 was difficult online. A limited number of drives hit Amazon, but all capacities warn of low availability (13x 1TB, 4x 500GB, 1x 250GB). Amazon does not show the 2TB model in stock. Newegg also shows the 2TB out of stock. 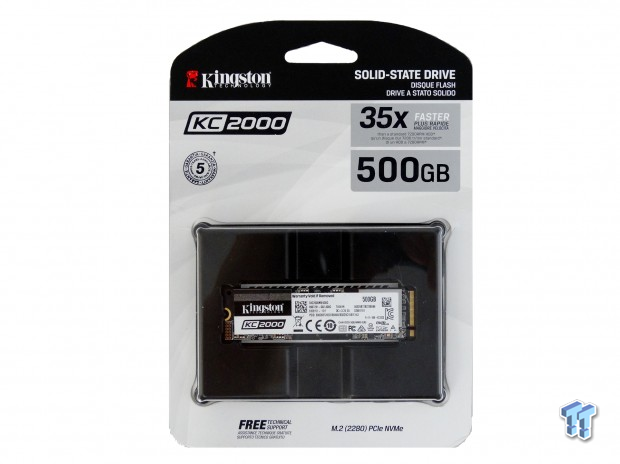 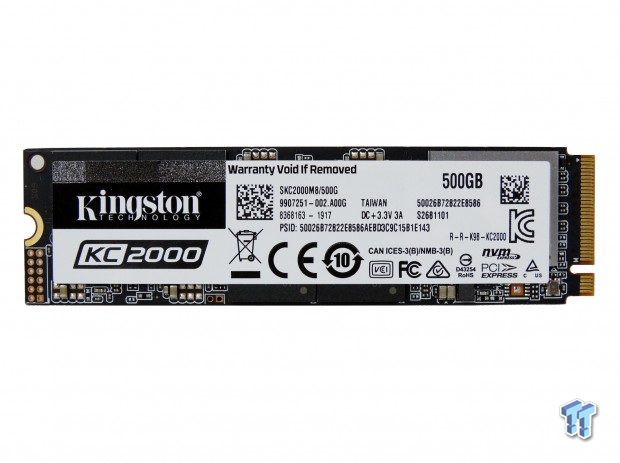 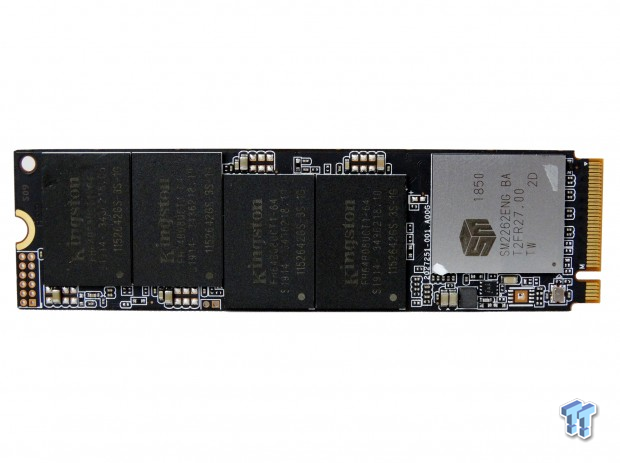 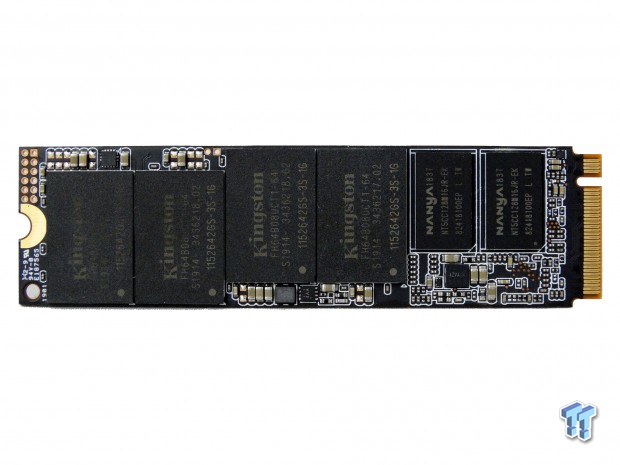 Kingston packed more packages on the KC2000 500GB as possible. The drive uses two-DRAM packages and eight flash packages. This could increase performance by maximizing parallelization during reads and writes. It also lowers the cost since low die count packages cost less per byte than packages with more die (in high demand for data center and enterprise SSDs). 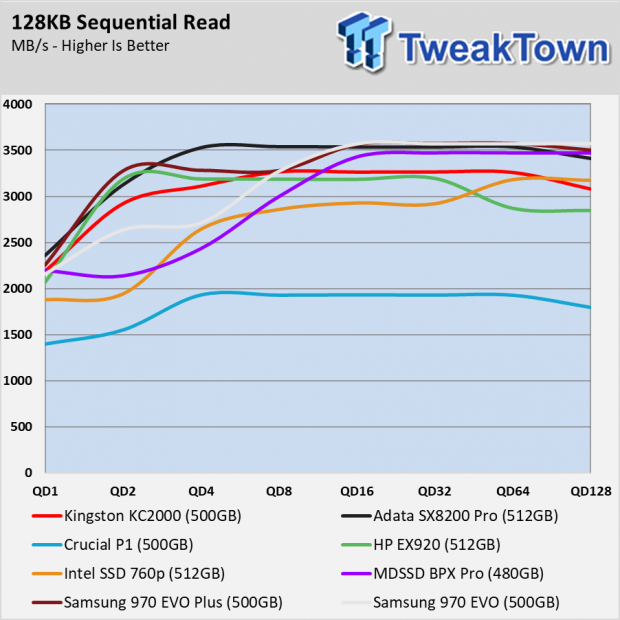 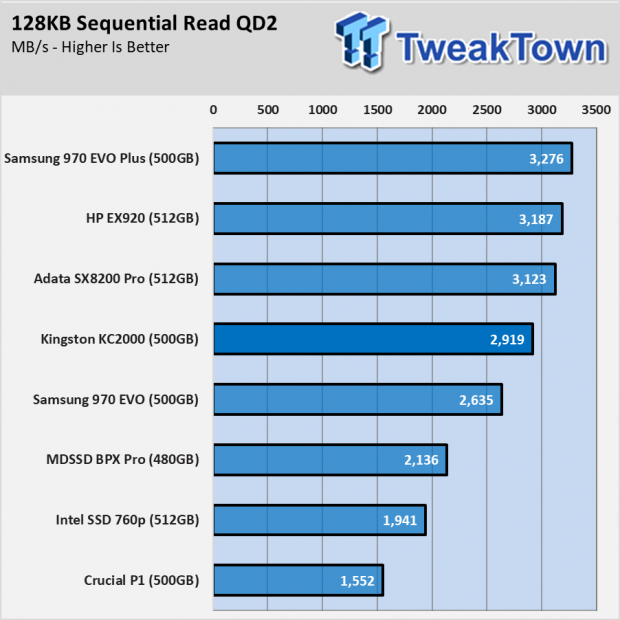 The 500GB KC2000 has a slow ramp up as we increase the queue depth in the sequential read test. The drive doesn't reach the same high peak performance as the ADATA SX8200 Pro with Micron flash. The drive delivers roughly similar performance to the HP EX920 with the previous generation SMI 8-channel controller. 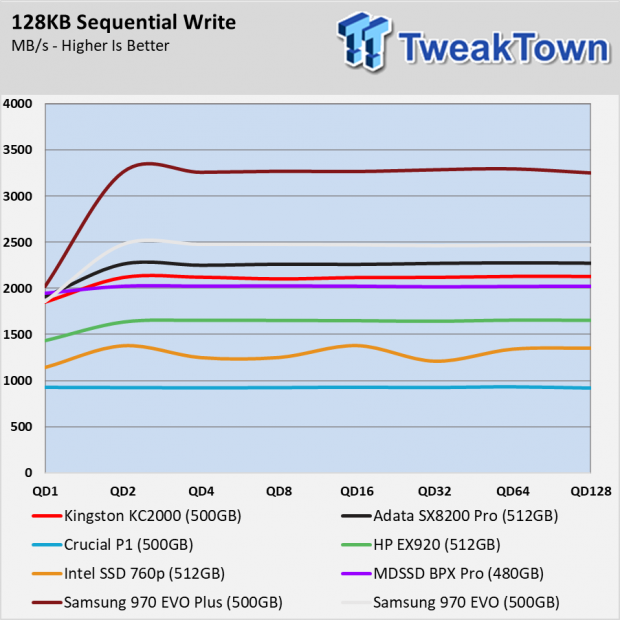 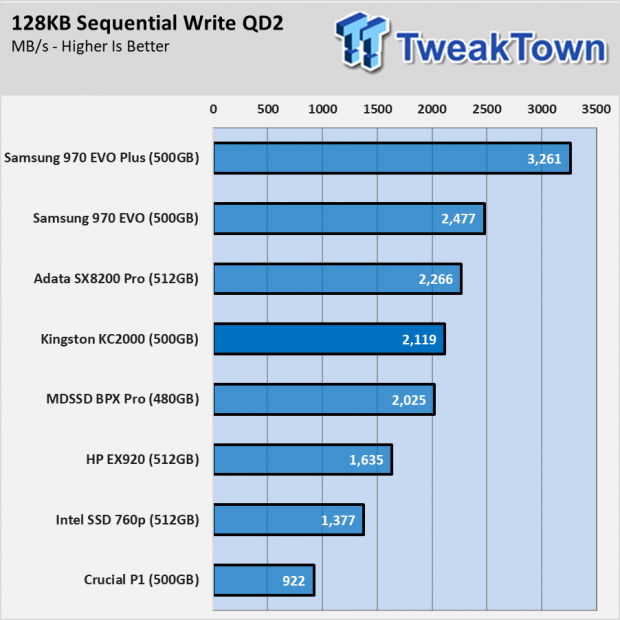 In the sequential write test, the 500GB KC2000 gain trails the SX8200 Pro even though the Kingston drive has the hardware advantage of 12GB reserved in overprovisioning. The KC2000 does deliver superior performance over the EX920 in this test thanks to the improved data path on the SM2262EN. 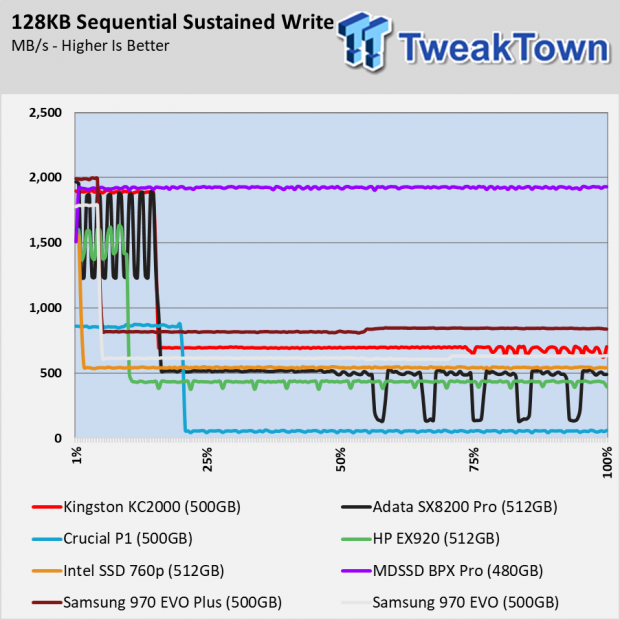 The Toshiba 96L TLC flash has an advantage over the Micron flash in sustained write workloads. The Micron flash shows waves even in the SLC write area. The Toshiba flash is fairly steady in the SLC buffer area. When the drives move to native TLC speeds, the KC2000 with Toshiba memory is quite a bit faster. 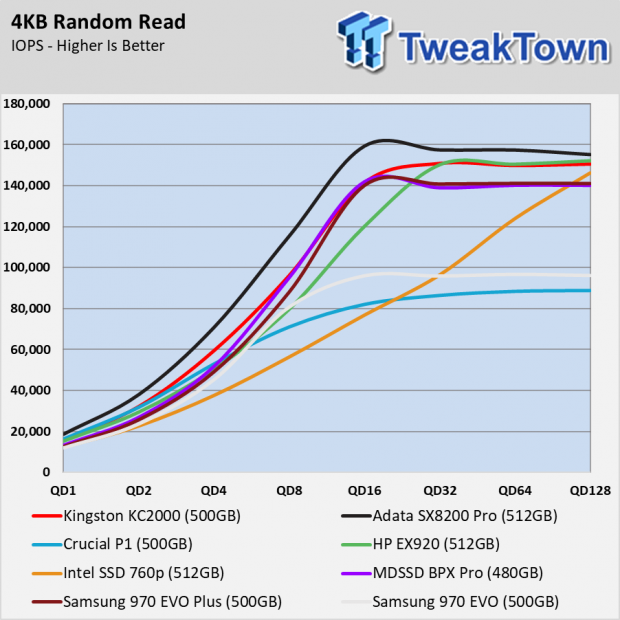 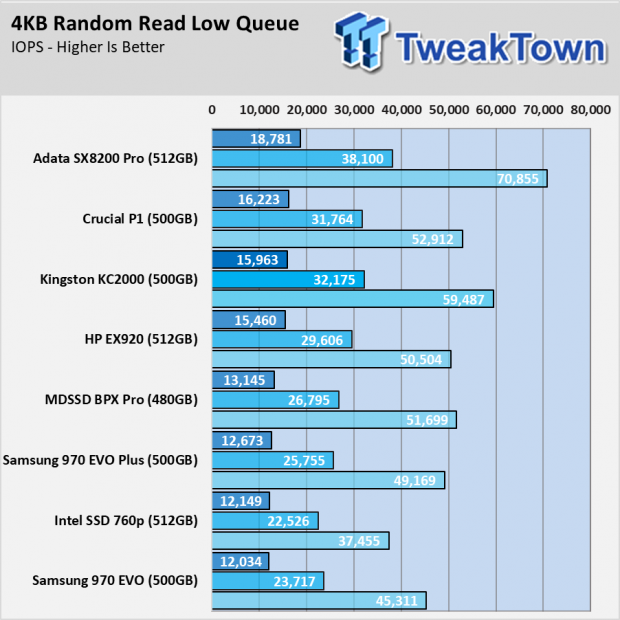 The area we are most excited to see is the random read performance. This is what makes the SM2262EN SSDs so fast in applications and gaming. The 500GB KC2000 trails the SX8200 Pro by nearly 3,000 IOPS at QD1. The drive even trails the Crucial P1 with 4-bit per cell (QLC) memory in this test but only by a small margin.

This shows us that the massive low queue depth random read performance isn't just the controller but also the flash. The controller still plays a large part, with nearly 16,000 IOPS at QD1 the Kingston KC2000 is a very fast drive for consumer workloads. 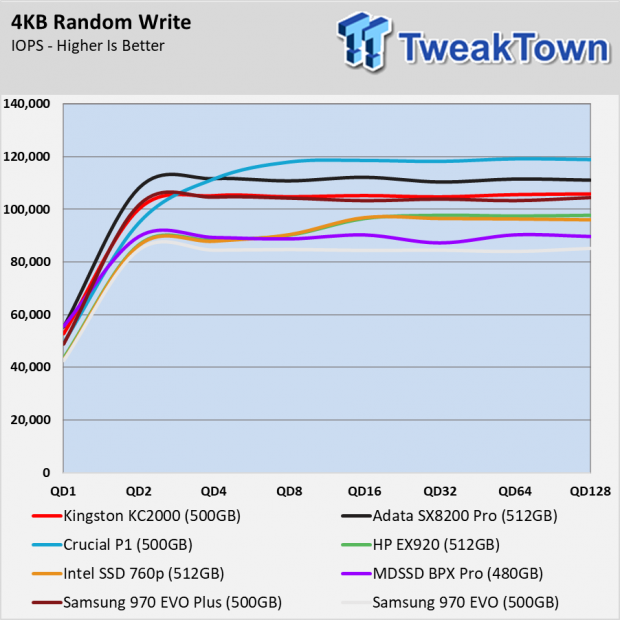 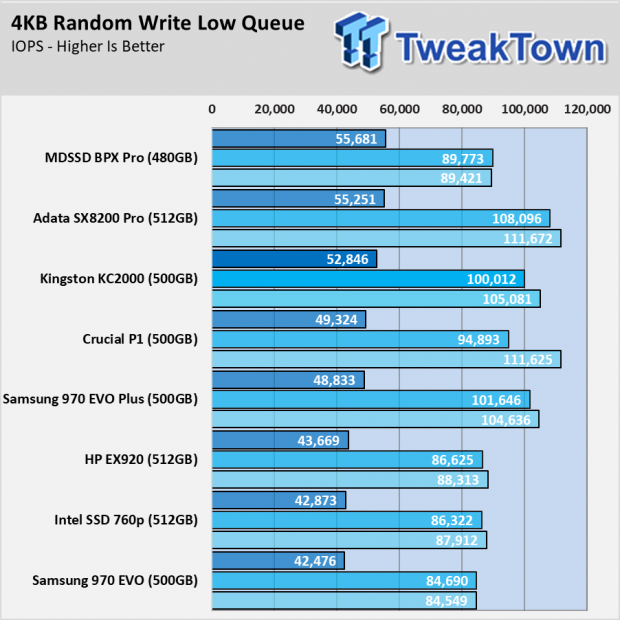 The KC2000 delivers strong random write performance that matches the Samsung 970 EVO Plus step-for-step through our queue depth burst testing. 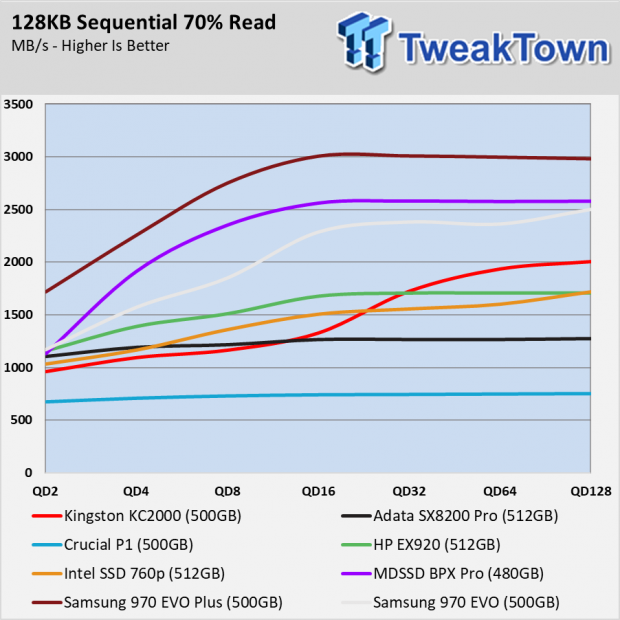 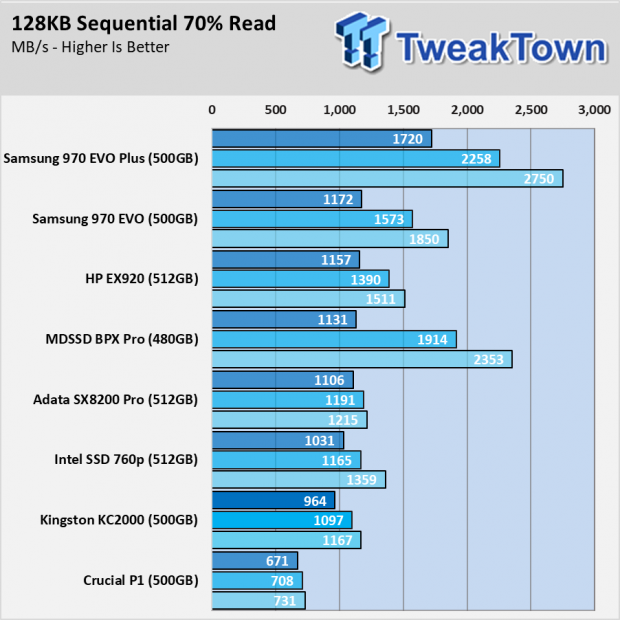 Historically, the SMI controllers don't give users strong sequential mixed workload performance. This is when you read and write data at the same time. There are a number of applications that use mixed workloads with video editing to multitasking at the top of the list. The Kingston KC2000 delivers just under 1,000 MB/s at QD2 but is slow to scale performance as we ramp up the demand on the drive. 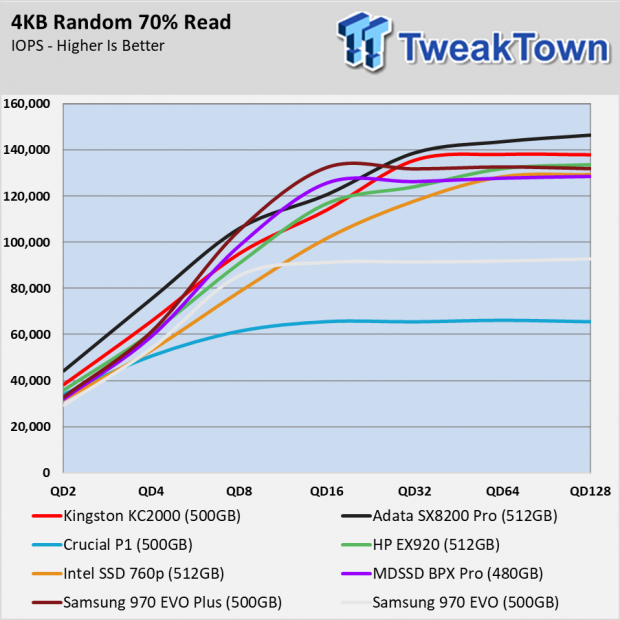 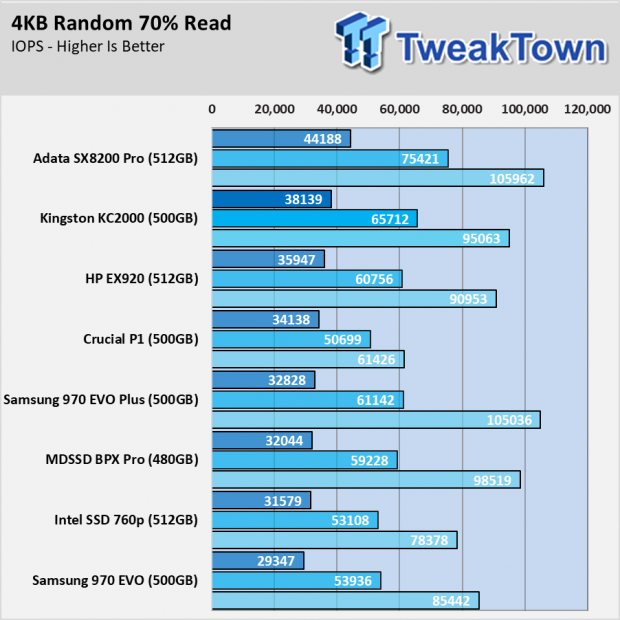 Mixed random workloads are not a problem for the 500GB KC2000. The drive scales really well, as we press the drive through increased queue. The drive does still trail the SX8200 Pro. 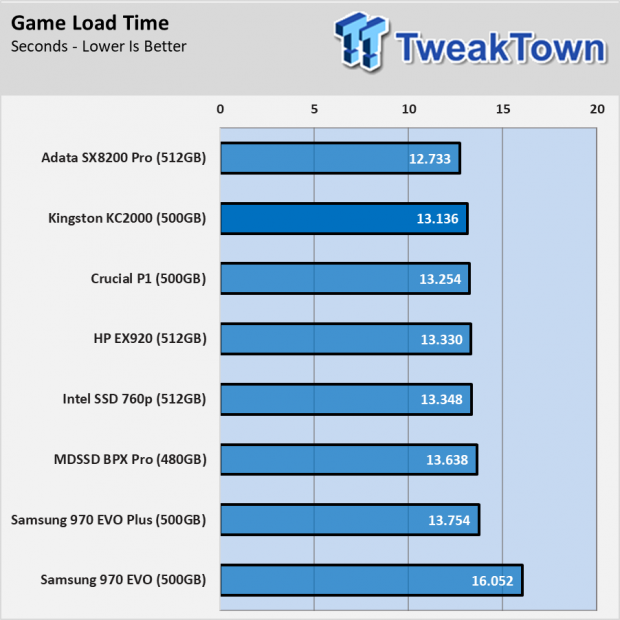 The lower random read performance at low queue depths only has a small impact on the KC2000 in our game load time test. The difference between the ADATA SX8200 Pro and KC2000 is less than a second. This is good news for gamers looking for another high-quality NVMe SSD to get an advantage on the competition in online gaming. 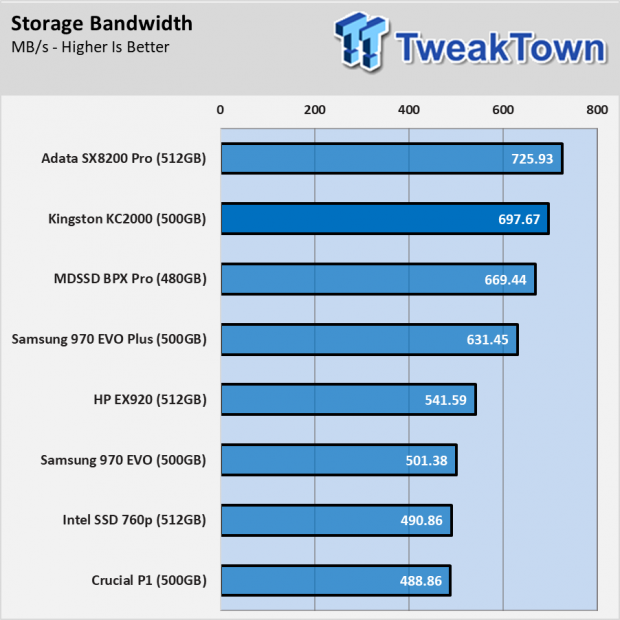 PCMark 8 uses a wider range of applications to measure disk performance. The nine applications run through ten tests measuring performance along the way. We summarize the numbers into an easy to read throughput score to present the data.

The KC2000 only trails the ADATA SX8200 Pro (and the HPX EX950 not on the charts today) in these general use applications. 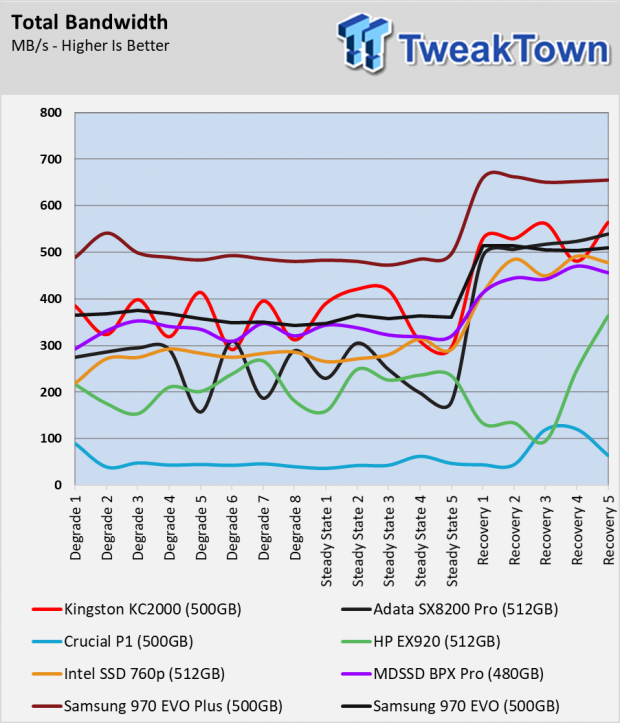 The PCMark 8 Extended Test takes the previous nine applications to build each measure point but preconditions the drives first to start the tests in a degraded state. For most users, the area we care about are the five recovery phases. If you use these drives in a workstation with heavy write workloads, then you should pay closer attention to the steady-state phases of the test.

In our extended sequential write test, the Kingston KC2000 showed more resiliency with its SLC cache. That carried over to this test where we see the KC2000 outperforming the SX8200 Pro in both the steady-state portion and the recovery phase. 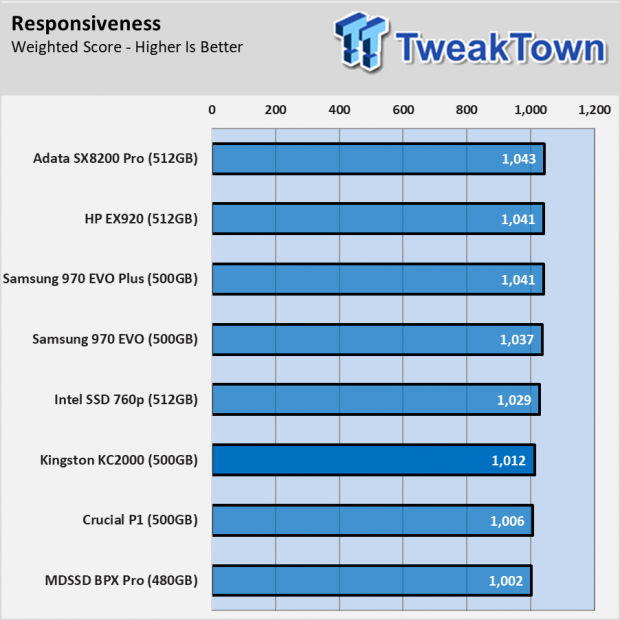 In the SYSmark Responsiveness Test, we see the KC2000 does not deliver the explosive user experience as the SX8200 Pro in office applications. 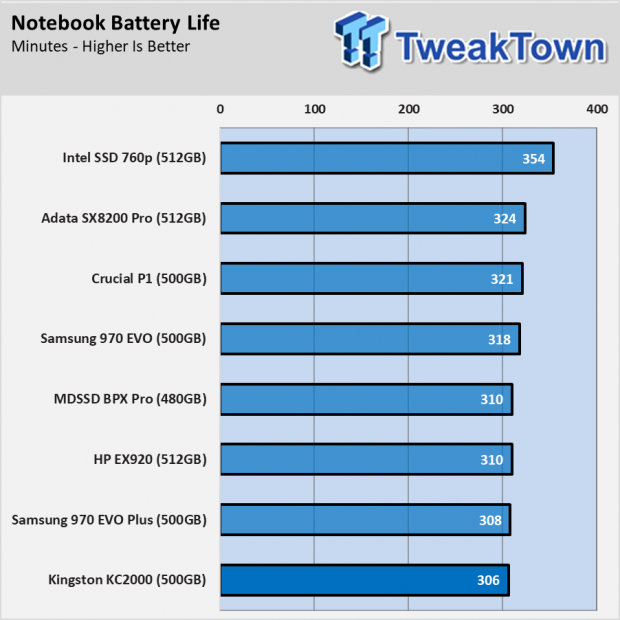 The large lot of components on the 500GB KC2000 require power to operate and that taxes our Lenovo Y700-17 system. The drive delivered 306 minutes or just over five hours in our gaming-focused notebook. The result was just 18 minutes shy of the SX8200 Pro with the same controller.

Kingston brought a strong consumer NVMe SSD to market with the KC2000 series. The drive delivers ample performance, has a great look, and is a real competitor to the small number of names we often see the top, mainly those with EVO or Pro somewhere in the title.

The Kingston KC2000 is new to the market, and prices haven't stabilized yet. The 2TB model is missing in action, and only a third-party seller has the series on Amazon. Even with those hurdles, we think we have a good indication of where the KC2000 pricing will be for the first few months.

Today we looked at the 500GB model, and at the time of writing, Amazon had the drive at $115. The ADATA SX8200 Pro with 12GB more user capacity sells for $74.99 or roughly $40 less than the KC2000. This is a large hurdle for shoppers to overlook with SSD prices the lowest we've ever seen.

The KC2000 does support full disk hardware encryption with TCG Opal 2.0 and Microsoft's eDrive. This is a necessary feature for corporate users, and we often don't see it from non-fab companies.

The KC2000 delivers strong performance in the capacity we tested but all of the components taxes notebook battery life compared to similar products shipping today. This is also an area corporate users care about.

All things considered, the KC2000 is a good NVMe SSD, but I'm not sure we would pay a premium for it to use in a computer that doesn't require encryption features.

Kingston brought out the Silicon Motion flagship controller and paired it with an unconventional memory combination for the KC2000. The drive delivers strong performance but lacks the full punch when paired with Micron TLC.