Samsung announced the 2TB capacity when it released the 970 EVO Plus series but stipulated the largest capacity model would come later in the year. For a time the model disappeared from the Samsung website and official specification lists. This last month the 2TB 970 EVO Plus started appearing online across the world and now we have one to test. 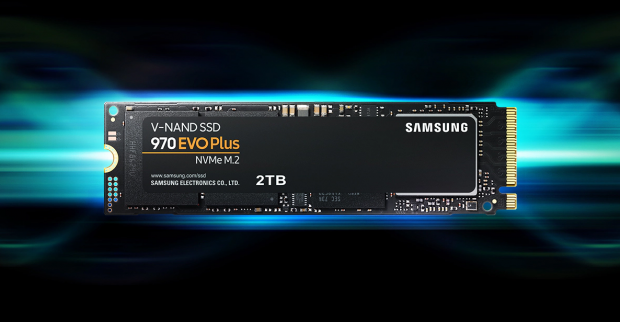 The 970 EVO Plus is what the company expected the original 970 EVO to be. Micron's lightening quick 2nd generation 3D NAND technology took everyone by surprise including Samsung. Products like the ADATA SX8200, HP EX920 and follow up, even faster, SX8200 Pro and EX950 weren't expected to perform as well as they did or encroach on Samsung's dominance in the NVMe market. The base 970 EVO was outmatched and yet the company held prices like a performance leader.

Samsung, now on its 5th generation V-NAND technology with 92-layers and a Toggle 4.0 interface, likes leading the market. The 970 EVO Plus is the company's latest attempt at retaking the performance and endurance crown from a growing list of competitive products shipping today.

The secret to the EVO Plus's performance increase from the previous generation is the new 92L V-NAND memory. The 5th generation die brings with it a 40-percent increase in bus performance, now 1.4Gbps, thanks to Toggle 4.0. Write performance also moved to 500-microseconds (µs), a 30-percent improvement over 64L V-NAND. The operating voltage is down to 1.2v from 1.8v.

The lower capacity 970 EVO Plus SSDs we tested with 3,500 MB/s read and 3,300 MB/s write speeds performed really well against other products of the same size. The new 2TB 970 EVO Plus brings similar performance but other models, generally, show much larger performance gains in the 2TB sizes.

We found the 2TB 970 EVO Plus on Amazon for a staggering $499.99. The drive just hit the market, so it still sells for the MSRP. We don't expect too much drop off, at least anytime soon. The 1TB model sells for $227.17 at the time of writing. Consumer SSD priced have dropped off quite a bit since Samsung released this series. For instance, the Corsair MP510 1920GB (2TB) currently sells for $279.99 on Amazon right now.

Samsung's familiar 5-year warranty comes with the 2TB 970 EVO Plus like the rest of the series. The 2TB model comes with a 1,200 TBW rating, twice the number of data writes compared to the 1TB 970 EVO Plus model. 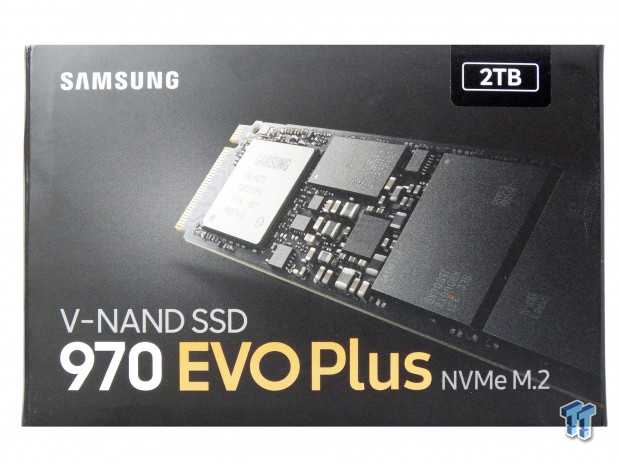 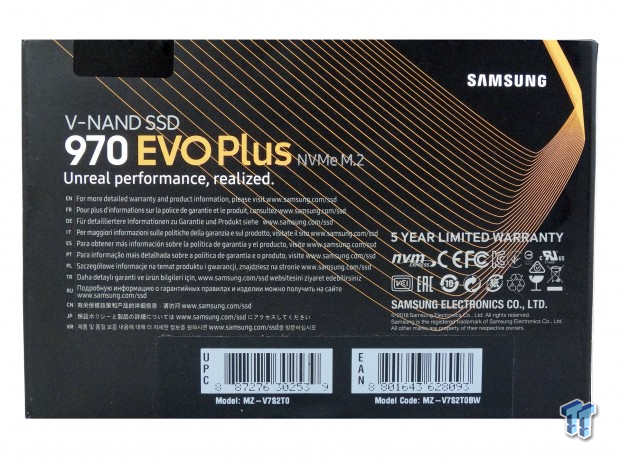 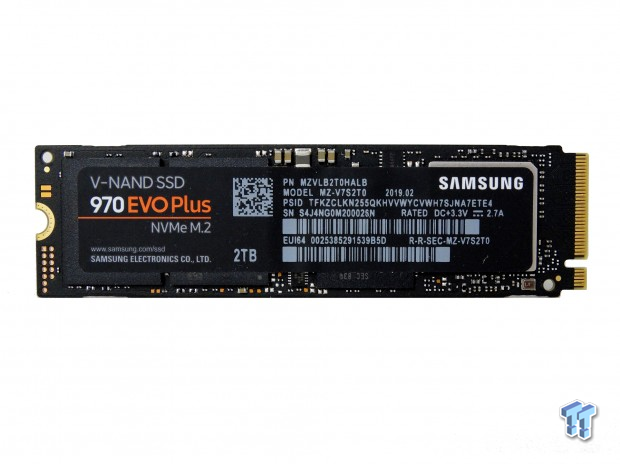 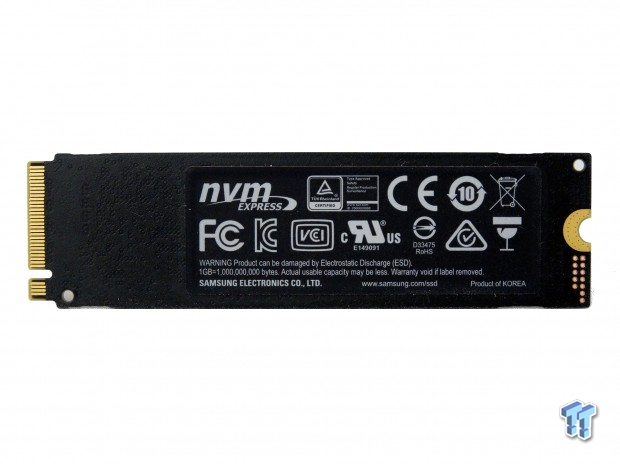 On the surface, Samsung just added the Plus part of the name after EVO. The new flash looks identical unless you have a decoder to decode the letters and numbers. Samsung uses the same Phoenix controller and the same DRAM density with the new EVO Plus series as it did the 970 EVO. 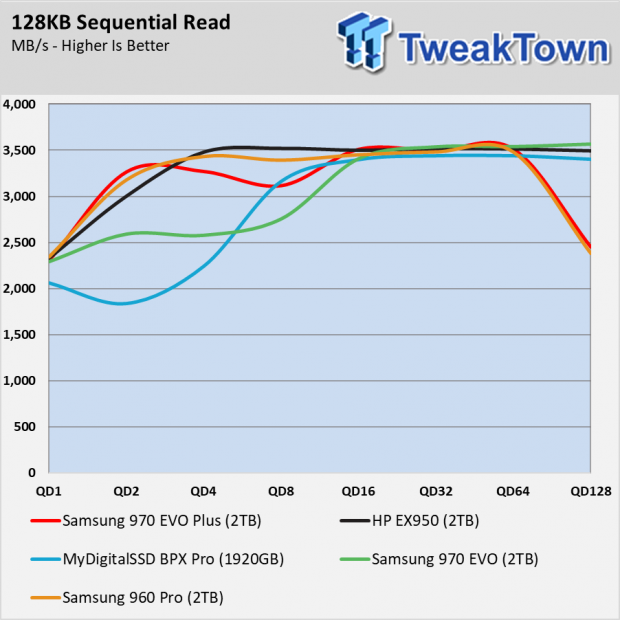 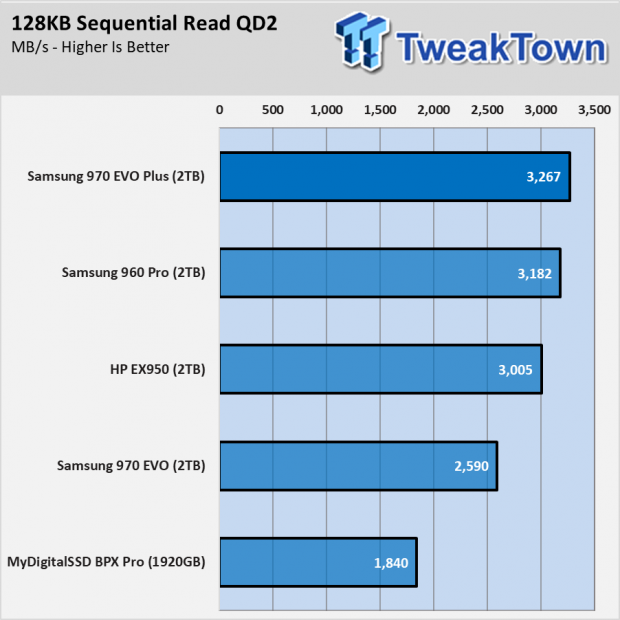 The new 2TB 970 EVO Plus manages to outperform the 960 Pro to queue depth 2 in sequential reads. The EVO Plus shows a very large performance increase at low queue depths compared to the original 970 EVO it replaces. 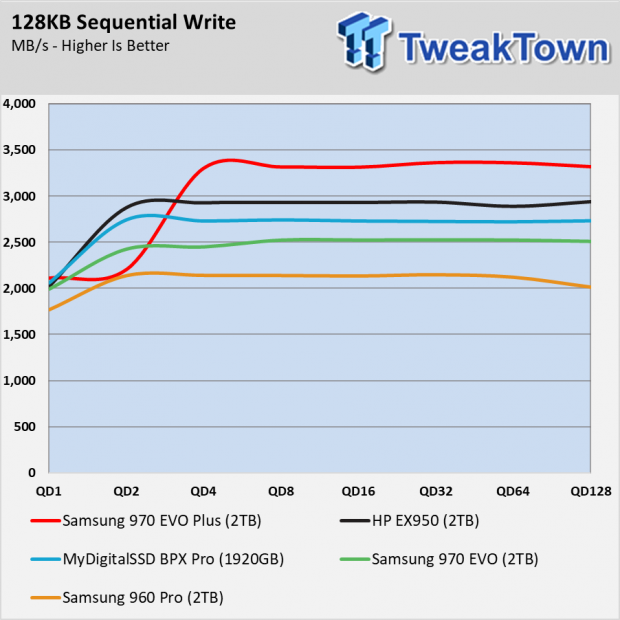 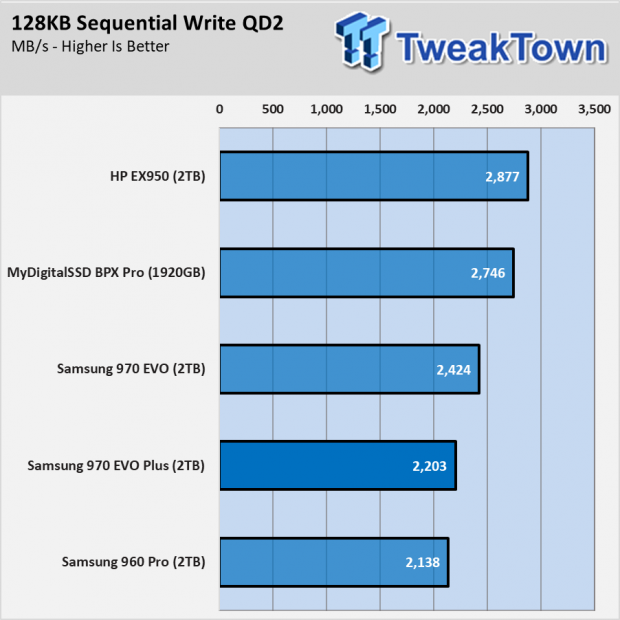 The drive stumbled slightly at queue depth 2 in our sequential write test but eventually took off to wipe the floor with the older 2TB-class drives. The 970 EVO Plus is really in a class of its own writing sequential data in bursts. 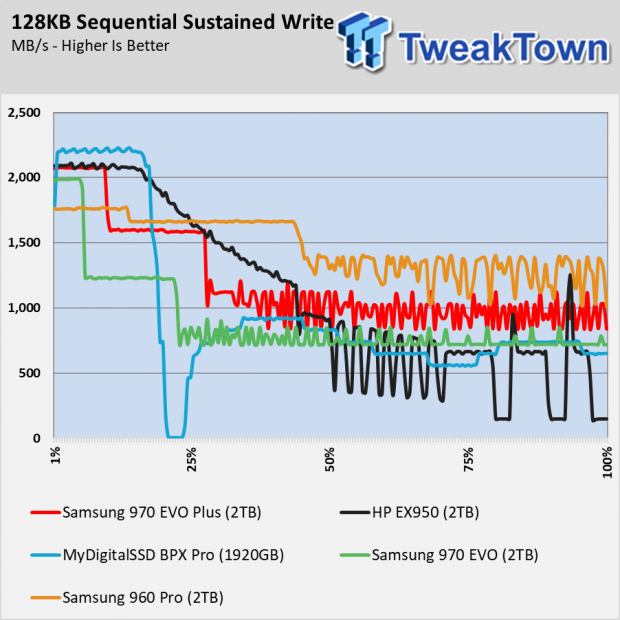 This test, we write sequential 128KB data to all of the user-available area of the drives. The EVO Plus shows a faster, and larger, SLC buffer thanks to an improvement to the TurboWrite feature. This test also allows us to see the native 3-bit per cell write-speed post buffer. The new 92L flash is quite a bit faster than the older 64L memory. 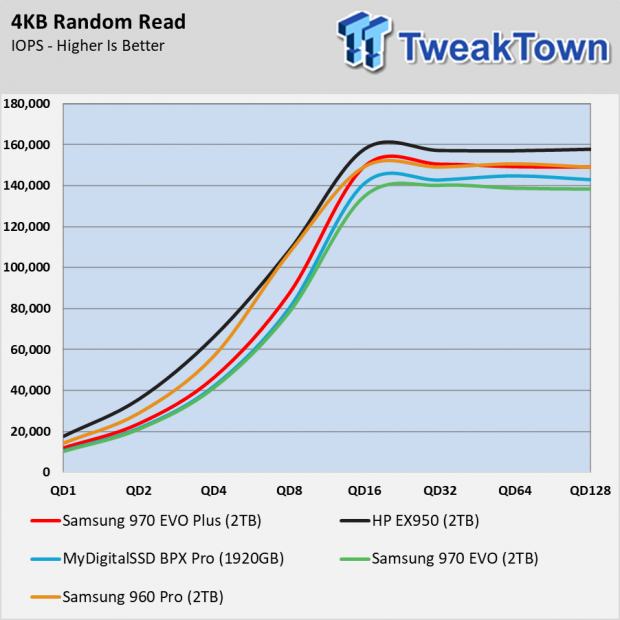 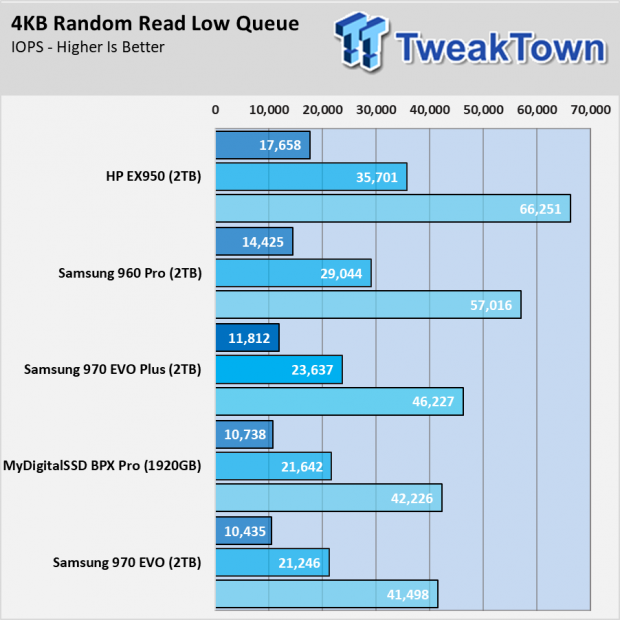 The new EVO Plus improves on the random read performance set by its predecessor, but the new series still trails the older 960 Pro and the newer run of NVMe SSDs with Micron 64L flash, like the HP EX950 and ADATA SX8200 Pro. 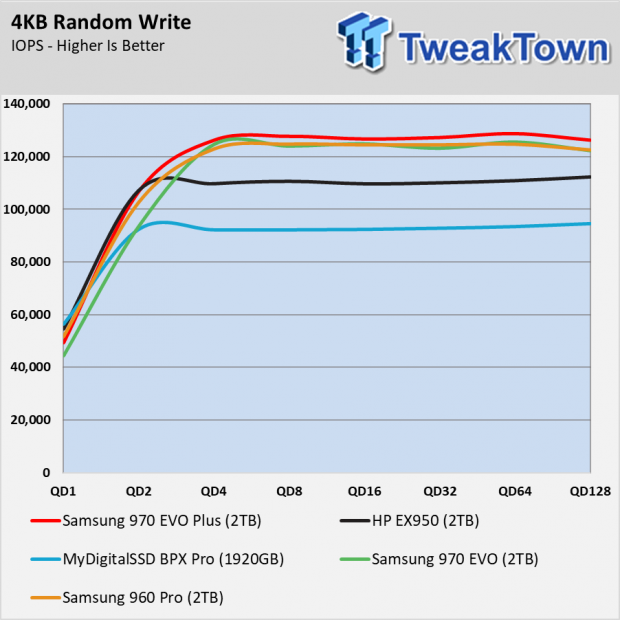 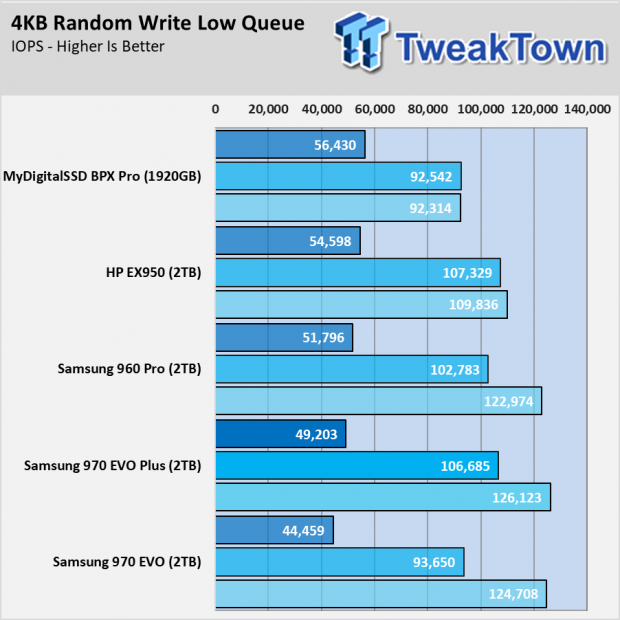 The burst random write performance is the highest we've tested on a consumer NVMe SSD thus far. The 2TB 970 EVO Plus matches the 960 Pro at very low queue depths but manages to outperform the iconic drive-in peak IO. 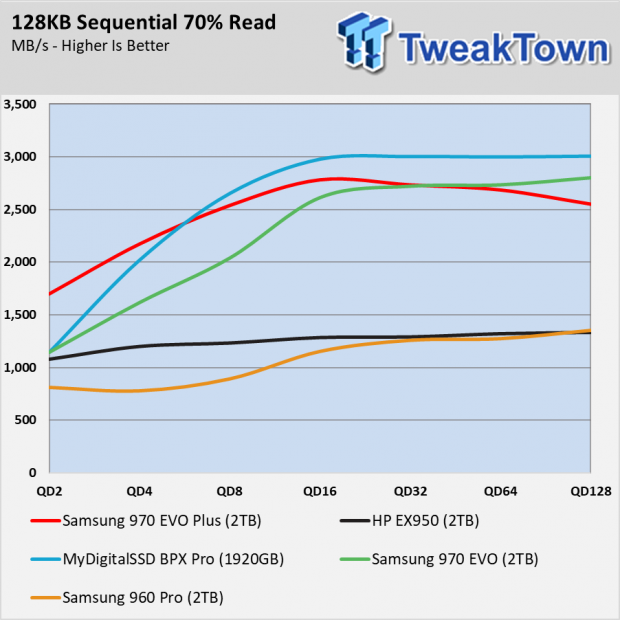 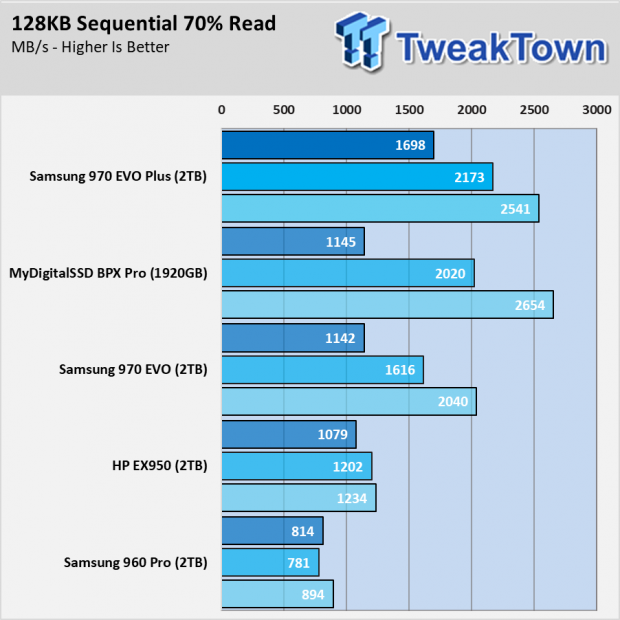 Mixed IO is often overlooked, but it's one of the most important areas for real-world performance. The new EVO Plus is significantly faster than the generation it replaces in our sequential mix test. 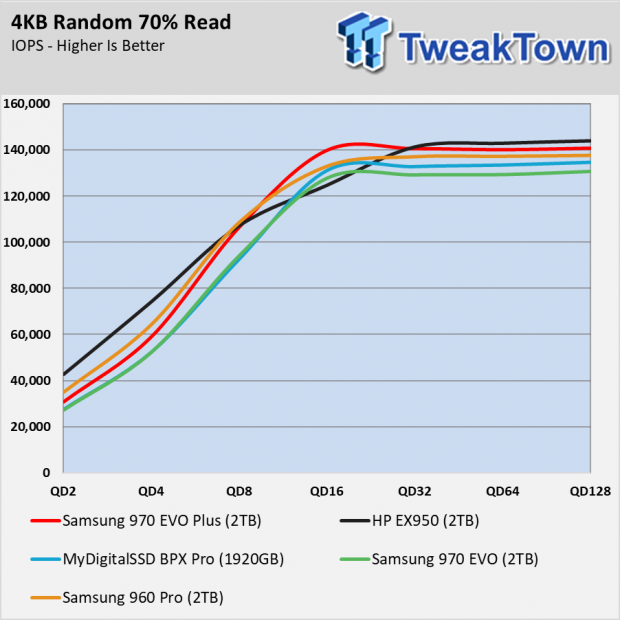 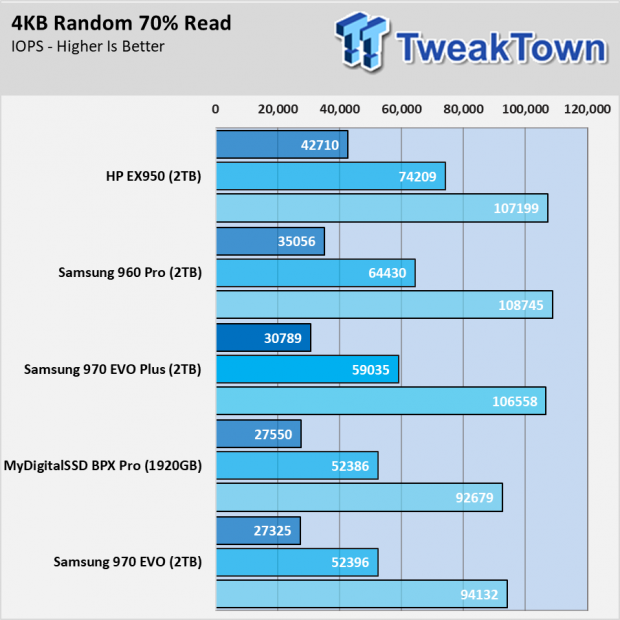 Samsung also made gains in the random mix workload over the previous generation. The EVO Plus still trails the older 960 Pro and the SM2262EN drives like the EX950 but did close the gap in this area. 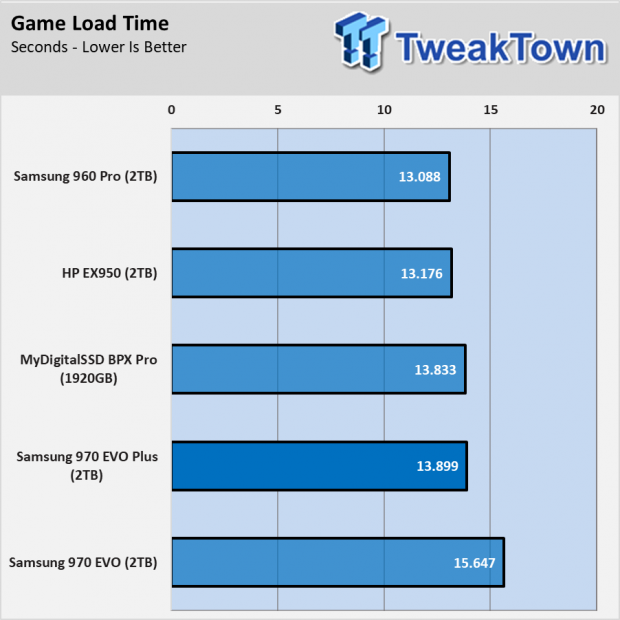 The Samsung 970 EVO Plus breaks into the 13-second club in our game load time test featuring Final Fantasy: Stormblood. The previous generation trailed other modern 2TB models by two full seconds, and we really considered that unacceptable given for the cost of these products. The new model fixes the low-performance loading game files. 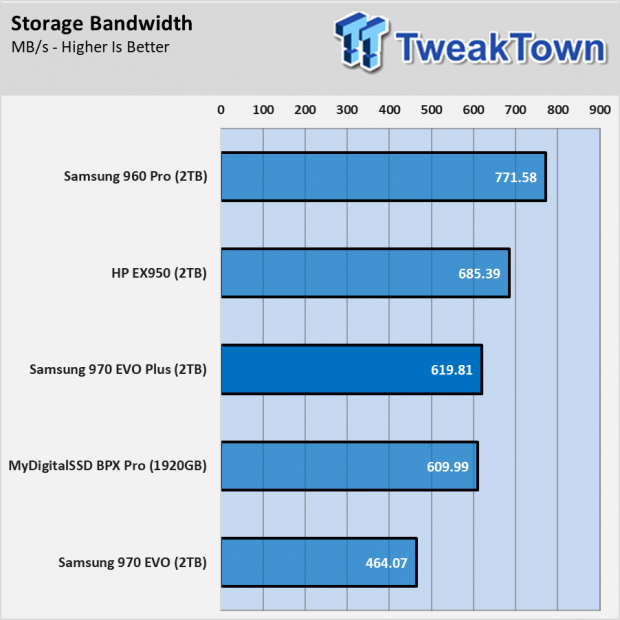 The PCMark 8 Storage Test uses nine general use applications to run ten tests similar to what most of us run every day.

The new 970 EVO Plus again shows strong performance over the previous generation it replaces. The drive still doesn't reach the same high levels as the 2TB 960 Pro, and it also trails the HP EX950. The drive does outperform the Phison E12 drives like the MyDigitalSSD BPX Pro and Corsair MP510, but only by a small margin. 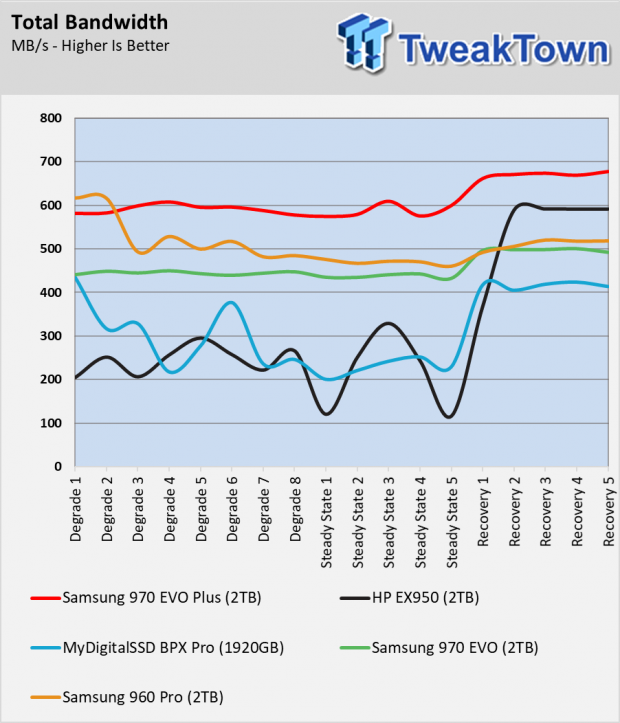 The performance hierarchy changes when we move to heavy sustained workloads. The new 970 EVO Plus is the first 2TB drive to outperform the 960 Pro in steady state conditions. Samsung has configured the firmware and hardware to only have a slight performance decline under very heavy use. 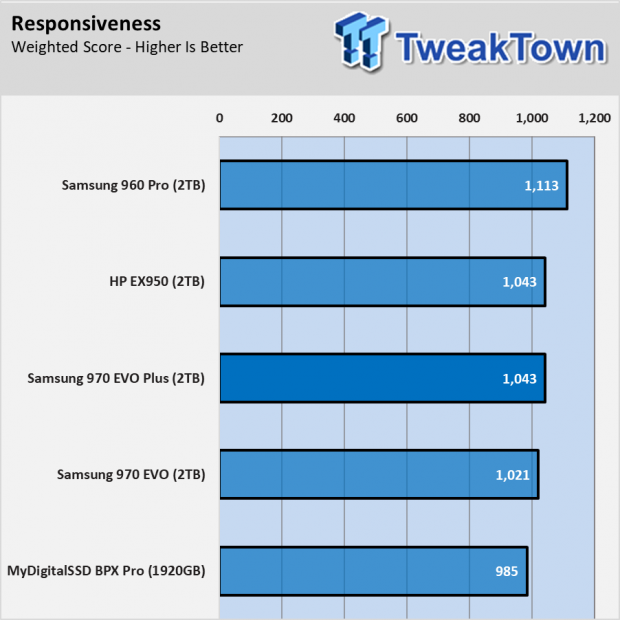 The 2TB EVO Plus is also the first current generation drive to match the HP EX950's Responsiveness Score in SYSmark. This is an important milestone for the 970 EVO Plus and shows the Samsung is back on track for office workers looking for the best user experience. 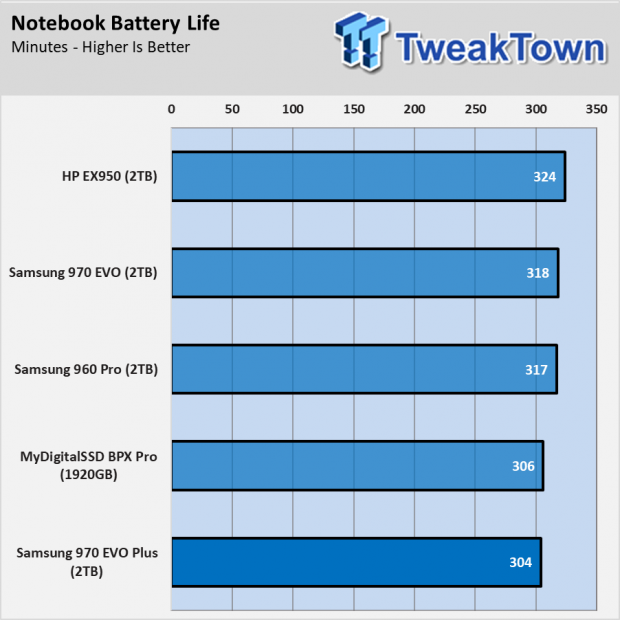 The new Samsung V-NAND uses just 1.2v compared to 64L that needed 1.8v. The new power requirements for the flash didn't help much in our notebook battery life test though. To be fair, we need to measure the performance again when our new batteries arrive.

We were forced to run this test with a 97% battery lifetime remaining due to back ordered batteries. Our normal cut off is 99%, so the results are not completely comparable. If we add three percent to the score, the result would be around 313 minutes, and that is what we expect to see on a new test when the new batteries arrive.

The Samsung 970 EVO was a disappointment for reviewers when first released. The drives were strong, but Samsung fell behind the competition in performance with the series. The 970 EVO just wasn't what we expected from a lineage of great NVMe products. In a way, the 64-layer generation was a wakeup call for the company. Others have mature 3D NAND technology, and they are coming after the leader in this space. 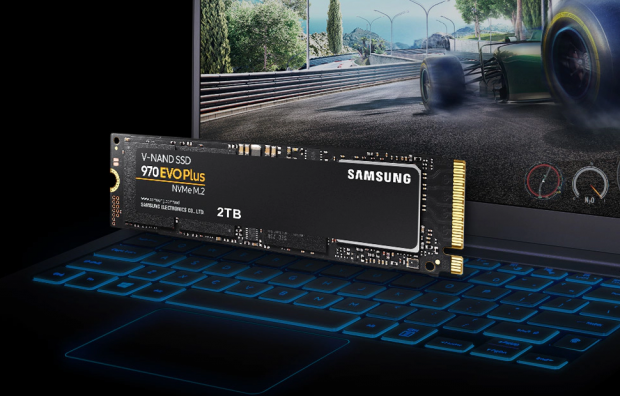 The new 970 EVO Plus puts Samsung back where it should be with consumer NVMe products. The series keeps the good features from the previous generation, like class-leading endurance, and supplements it with better performance. In the 2TB capacity, the EVO Plus doesn't provide an outright performance win in every test, but it wins enough, and gives them in the right places, to make this the drive to look at first when shopping.

Samsung does have a new issue to contend with, pricing. The 2TB 970 EVO Plus sells for $499.99 at the time of writing. In years past, that might look attractive, but with products like the Corsair MP510 (Phison E12 / Toshiba 64L TLC) selling for just $279.99, it's very difficult to recommend the EVO Plus for most users.

Where pricing doesn't apply is when the workload demands high performance under heavy loads. This is where the 970 EVO Plus kicks it up a notch over all other TLC, and even older MLC drives. The 2TB 970 EVO walked all over the 960 Pro in the PCMark Extended Storage Test that uses steady-state conditions to measure performance. In a demanding workstation environment, the 970 EVO Plus is the must-have SSD for those unwilling to invest in Optane.

Samsung gets back on track to lead the consumer NVMe market with the 970 EVO Plus. The 2TB model shows excellent performance but its high cost will limit sales in the age of cheap flash.