The 960GB Crucial BX500 is a strong SSD for loading games, but doesn't deliver similar results as a general purpose drive.
Buy at Amazon

Crucial's BX500 960GB is a slight departure from the smaller capacity models we tested last December. From a hardware perspective, the largest BX500 in the series uses a slightly better controller and introduces us to Micron's 96-layer 3-bit per cell flash. In the foreground, the BX500 gains a new larger capacity that meets a strong price point for budget-minded shoppers. 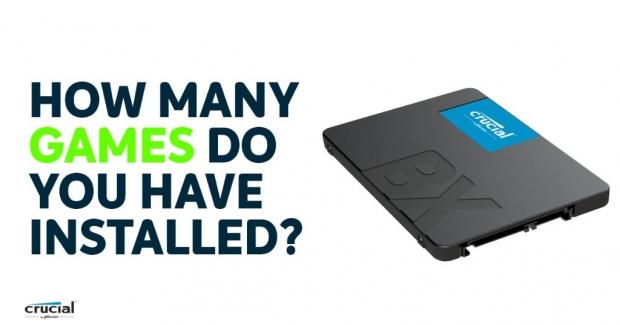 The BX500 series didn't gain a large following like some of the previous products in this series. The DRAMless design, new for the 500 models, doesn't deliver exceptional random performance like the MX500 that feels as fast as a strong NVMe SSD.

The biggest complaint many reviewers had with the series was capacity. It's difficult to scale DRAMless SSDs and keep the performance high due to the amount of data kept in the flash translation table. The larger the drive, the larger the map can grow to. DRAMless SSDs use a small amount of high-speed SRAM in the controller, but it's much smaller than dedicated DRAM attached to the controller.

Advanced technologies such as compression and better use of the limited SRAM available now make larger capacity DRAMless SSDs possible. In our article today, we'll see how the technology has progressed since DRAMless designs were introduced as entry-level consumer SSDs three years ago. We will also look at ways you can utilize these low-cost drives in your system today to increase performance even if you have a modern NVMe SSD installed already.

The BX500 grew to four capacities with the introduction of the 960GB model. The large capacity drive shares the same performance rating with the smaller models. Crucial specs the entire series with 540 MB/s sequential read and 500 MB/s sequential write speeds. The company doesn't list random performance specifications for the BX500, and this is the first model in the series advertised this way.

The 960GB BX500 uses a different controller than the other three sizes. Crucial moved to the Silicon Motion, Inc. SM2259XT with end-to-end data path protection and increased error correction technology compared to the SM2258XT found on the three smaller sizes.

Crucial also made a change to the memory. The 960GB BX500 uses Micron's new 96-layer 3-bit per cell (TLC) flash technology. At one point saw 96L memory as a chance for Micron to further increase performance over the exceptional 64L memory that currently powers the fastest consumer SSDs shipping today.

This was backed up by our preview article with the Silicon Motion, Inc. SM2262EN but we later learned the controller was responsible for the performance increase and less so the flash. The 96L memory does increase the number of die per wafer (the die is smaller), but we don't know how many more per wafer. What we do know is that 96L TLC will decrease the cost of flash without any negative impact to performance.

The new 960GB BX500 includes a 3-year warranty that includes 240 TBW of write endurance. Crucial's Momentum Cache software will help to decrease the number of random writes to the drive by buffering the small blocks in DRAM and passing the data to the drive as large block data. This also helps with to decrease the size of the flash transition table map. Crucial's Storage Executive software now allows you to use Momentum Cache on a secondary drive. We will cover that more at the end of the review. 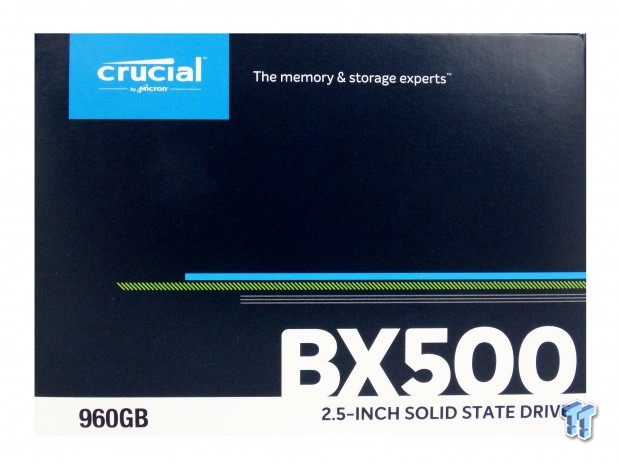 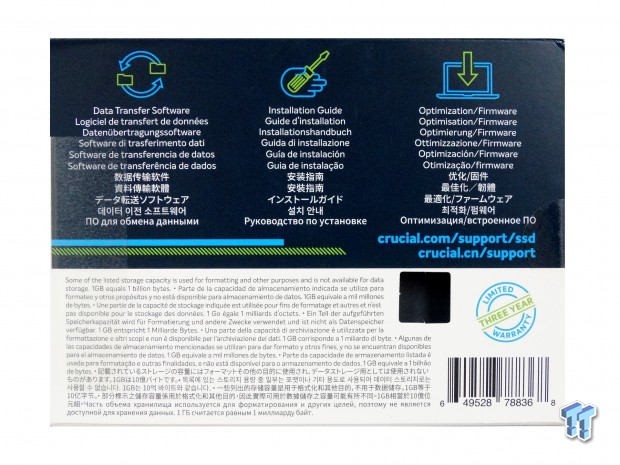 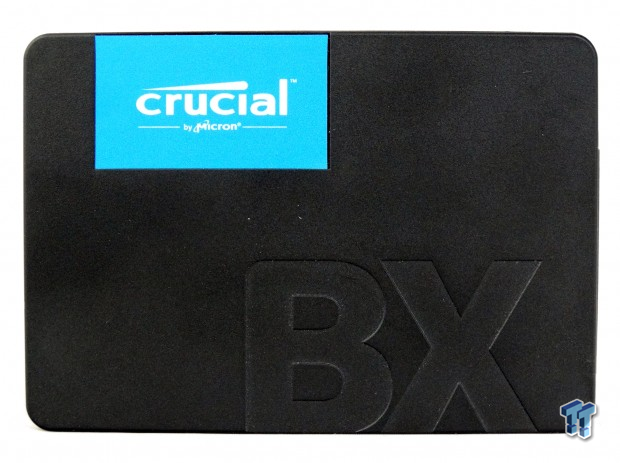 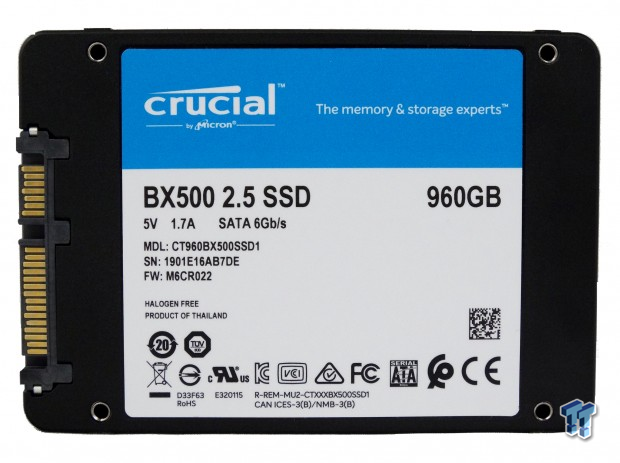 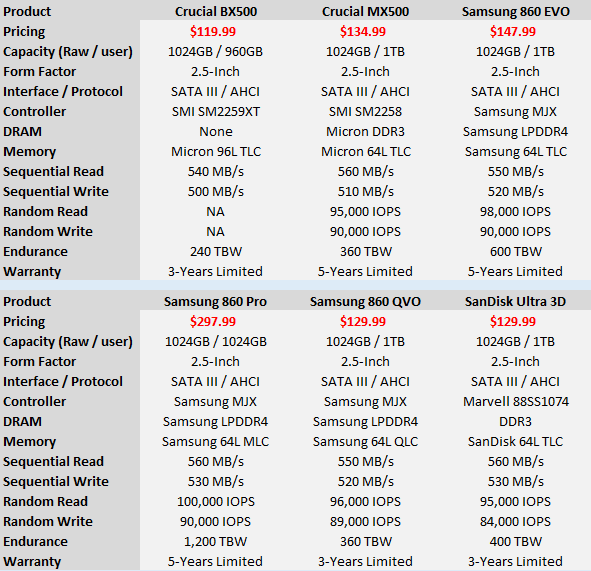 The 960GB BX500 faces strong competition in this review. There are very few 1TB class DRAMless SSDs on the market at this time, but expect more in the second half of the year. The other drives in the charts today are some of our favorite SATA SSDs shipping today. Some of these drives are as close as $10 more than the DRAMless BX500, but have the additional chips that significantly increase random performance. 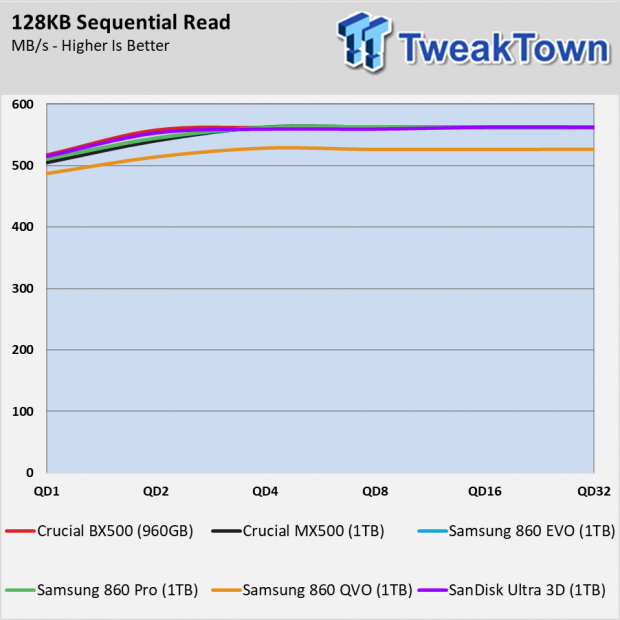 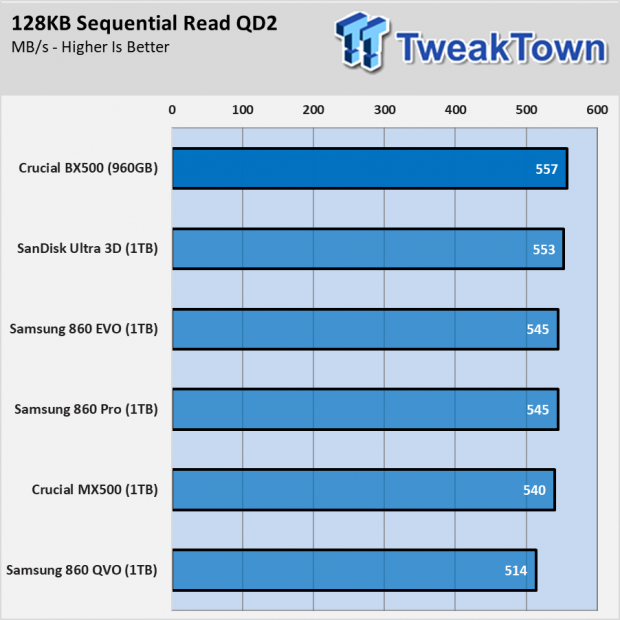 The lone QLC SSD, Samsung 860 QVO, stands out from the rest with slightly lower sequential read performance. The other drives all fall within a few megabytes per second through the queue depth (QD) range. 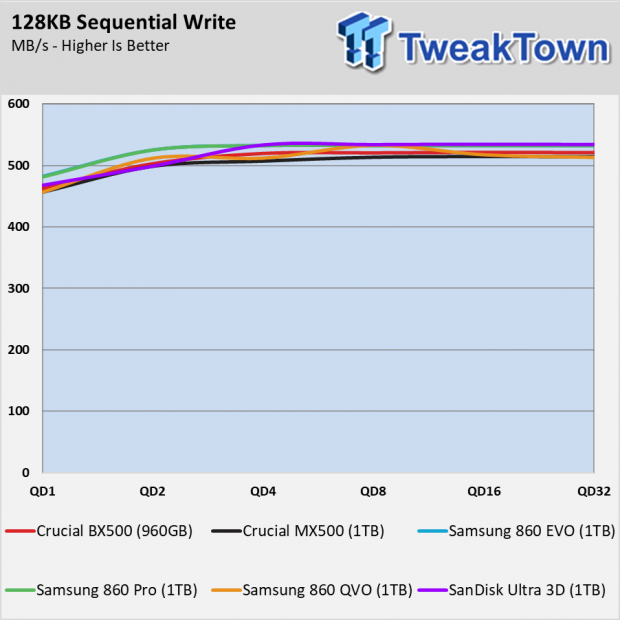 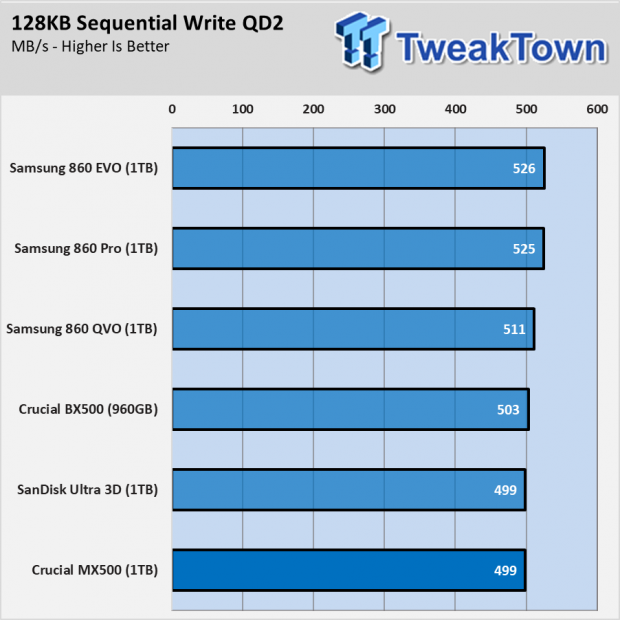 Sequential write performance is also very close with burst data between all the drives. This is due to the limitations of the SATA interface. NVMe SSDs using the four channels and the same flash are capable of delivering much higher performance. 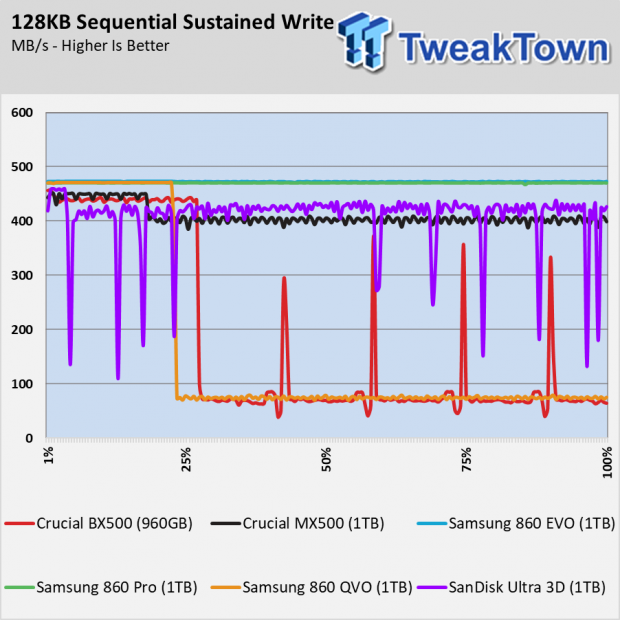 The Samsung 860 Pro is the only drive without an SLC buffer. It uses 2-bit per cell flash. The other drives reply on writing to a programmed SLC cache that is often dynamic in size. The chart shows the best possible conditions, with the drives empty when we start and moving to 100% fill of the user area.

The 960GB BX500 shows a strong SLC area that is larger than many of the other drives. The three Samsung drives show faster 128KB block write speeds. The 860 EVO uses a larger buffer, but the 860 QVO drops faster than the BX500. Both the BX500 and the 860 QVO write large block size sequential data at less than 100 MB/s outside of the SLC buffer. 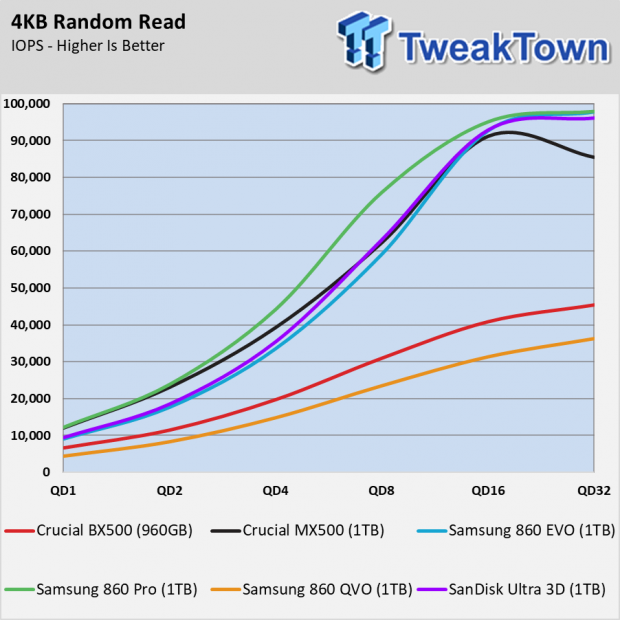 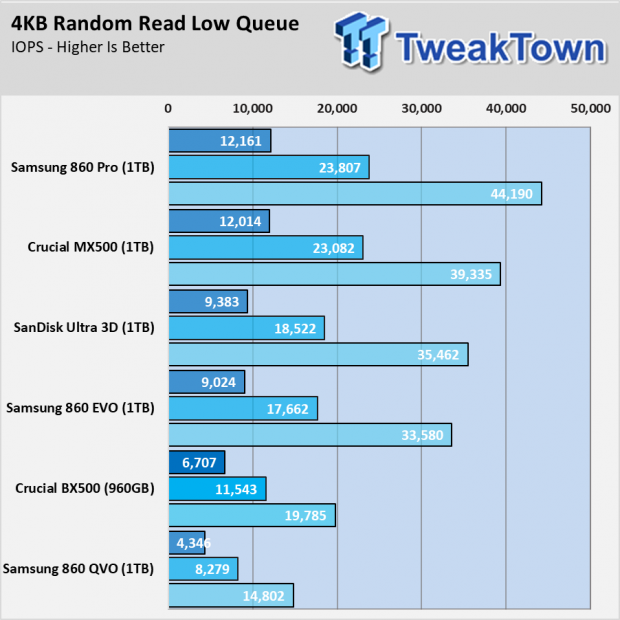 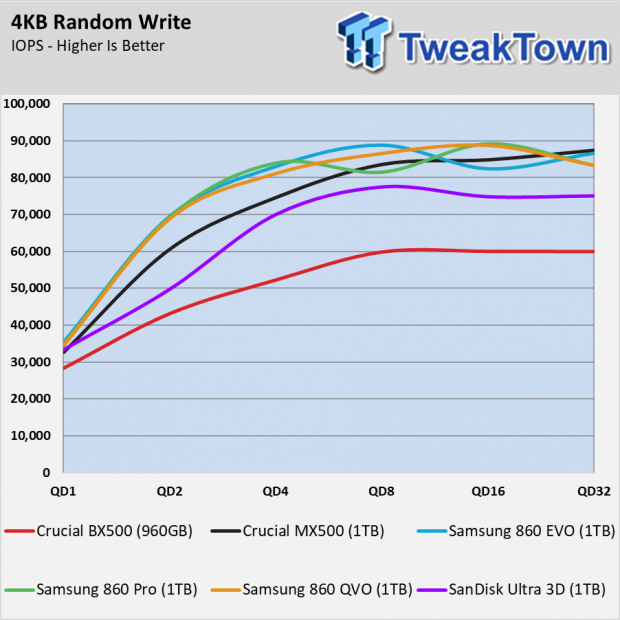 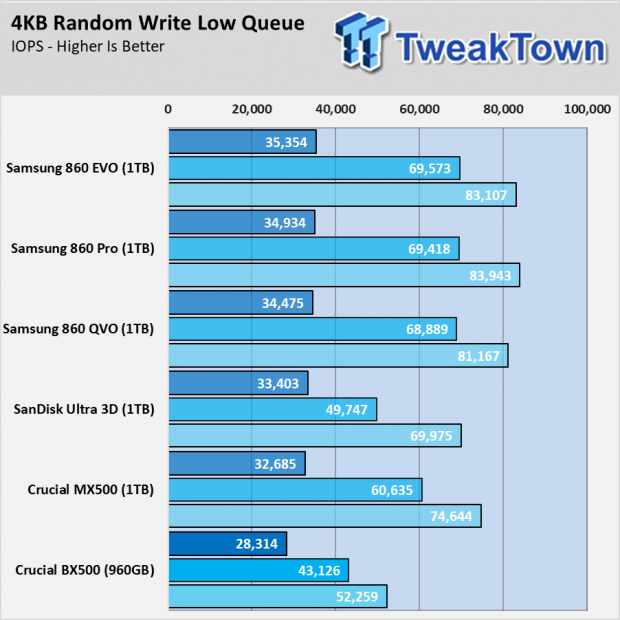 DRAMless SSD's weakest link is with random write performance. This is where the buffer for the table map really increases performance. 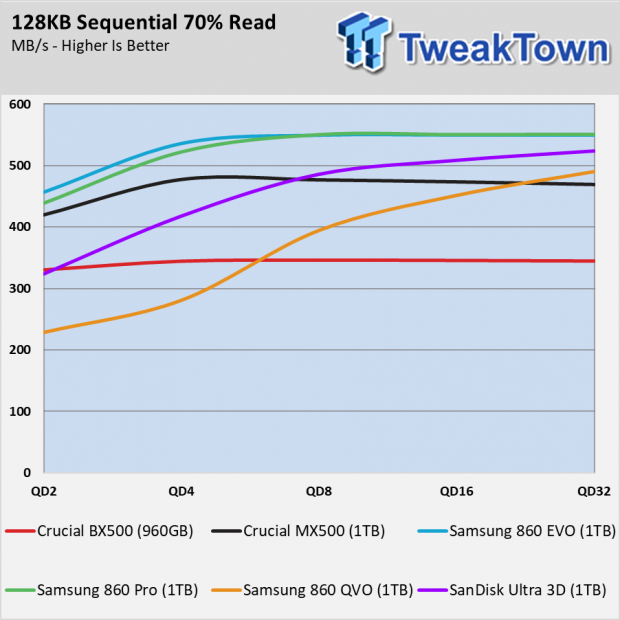 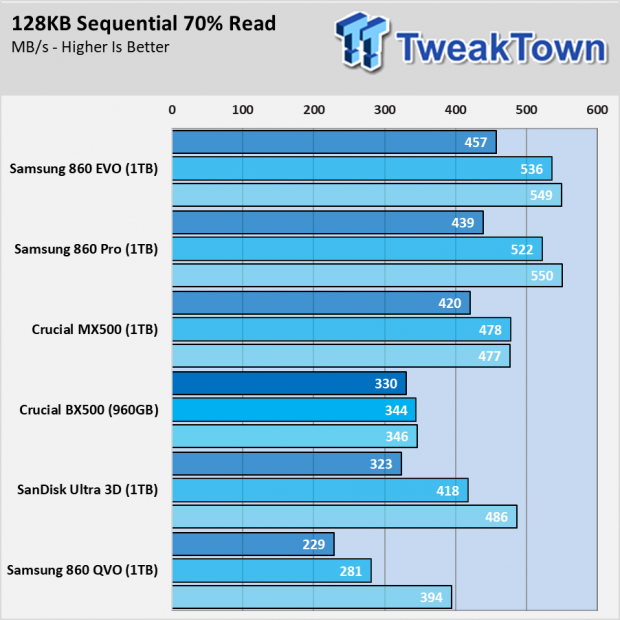 The 960GB BX500 has a flat performance curve with mixed sequential data. The performance in this area is lower than most of the other drives but it is predictable and consistent. 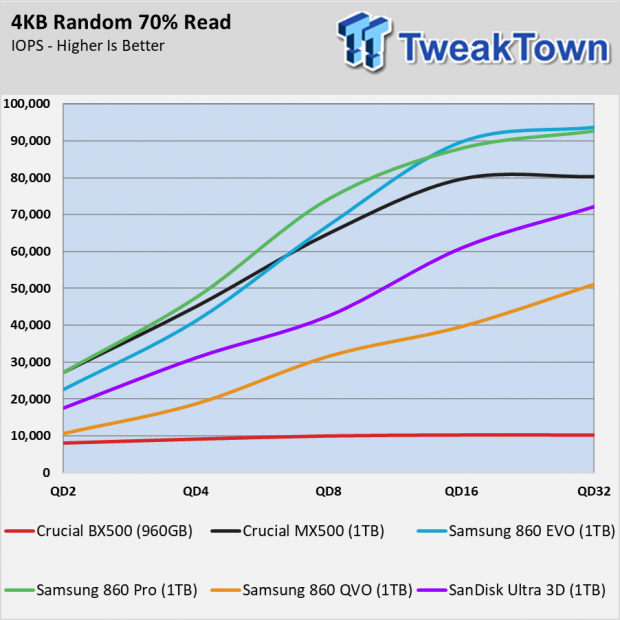 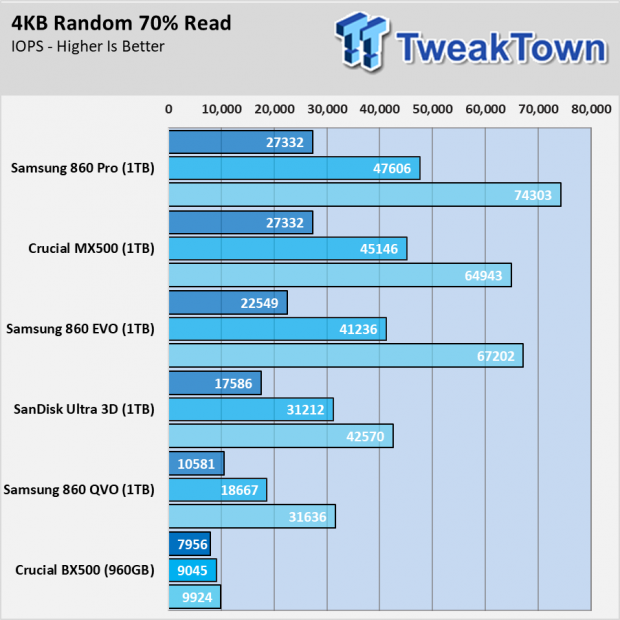 Although the performance looks low, and it is by SSD standards, the 960GB BX500 delivers nine times more performance in this test compared to the best consumer hard disk drives shipping today. 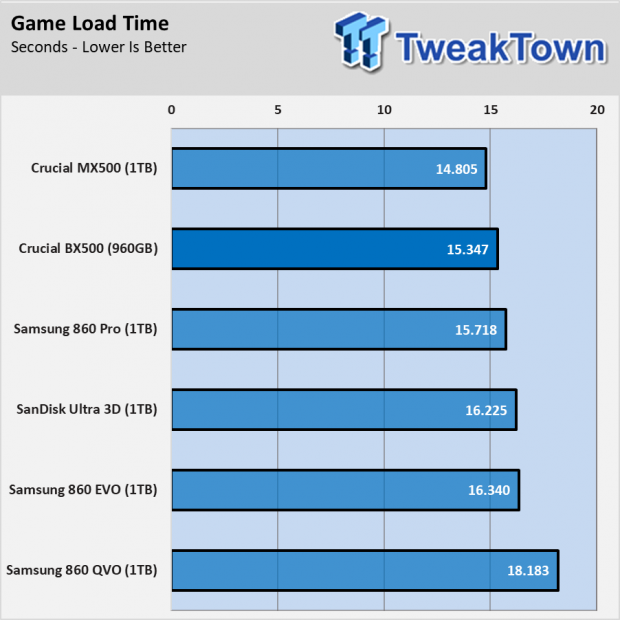 You may have noticed the Crucial graphic on the first page that asks about game data. With low random performance, why would Crucial target gamers with this drive?

A lot of the data that loads for PC games is sequential in nature and uses large block sizes. This is the best scenario for the BX500. The 960GB model actually outperformed all the other drives in the charts today in the 100% sequential read test on the previous page. 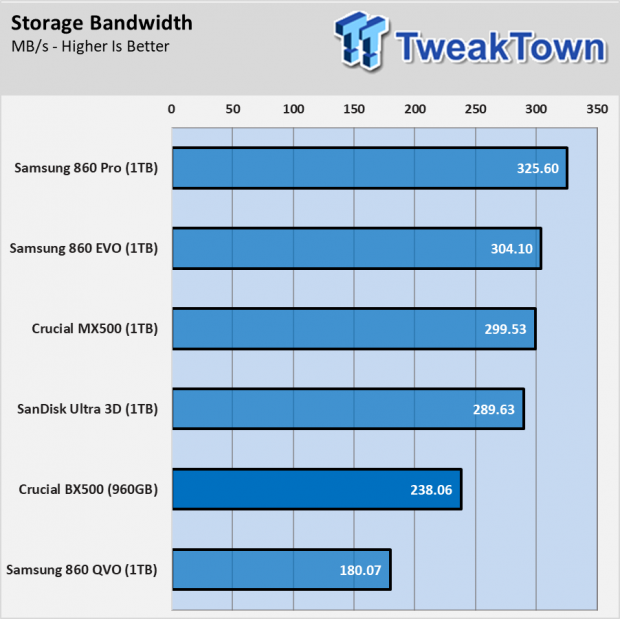 Most applications do not have a heavy focus on large block size sequential data, your operating system included. Random data performance is what makes you PC feel fast, and that carries over to many popular applications including office-focused suites.

The BX500 is faster than the 860 QVO in these applications but trails many of the other drives. 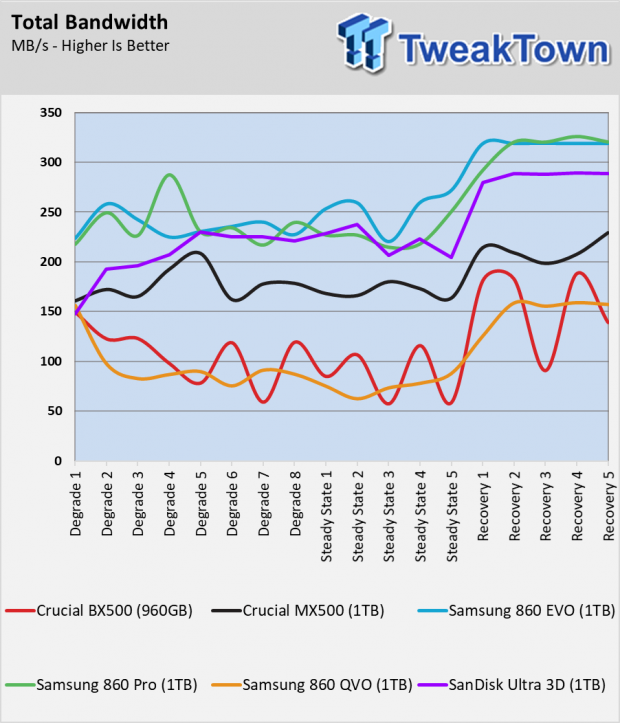 The extended PCMark Storage Test fills the drives with data and then measures performance through several stages with varying conditions. The BX500 and 860 QVO both show poor performance with the drives filled and in steady-state. The drives both also take longer to recover performance than the others when introduced to idle time. 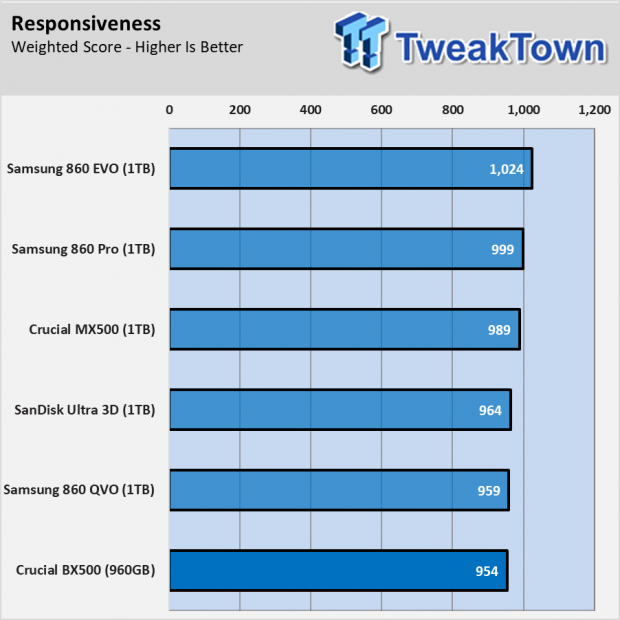 As we mentioned, system responsiveness, AKA latency, are what makes your PC feel fast. The link to how the system feels is random performance and more specifically, random read performance. In the mixed workload test, we saw how the increased random write latency could have an impact on random read performance. The BX500 is the only DRAMless SSD in this test and that's why the drive is at the bottom of the responsiveness test.

There are other DRAMless SSDs shipping today but very few 1TB class models. Most companies stuck with 512GB class and smaller drives but in the second half of the year, we will see more products like the 960GB BX500. 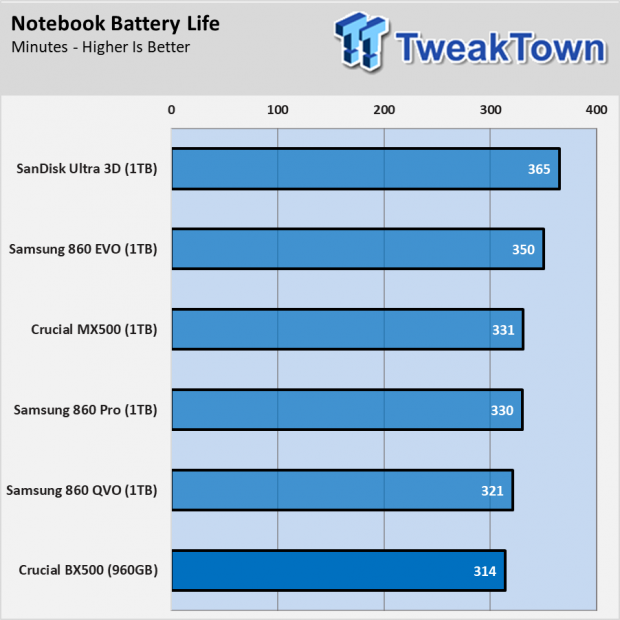 The BX500 needs to work longer to manage data during background activities like garbage collection. That means the drive needs more active time before it can return to a low-power idle state. Background data management uses as much power as a random writes with many of the SSDs we've measured.

The high active time means the 960GB BX500 consumes your notebook battery faster than most other SATA SSDs shipping today.

In the introduction, we said we would talk about Crucial's marketing of the BX500 to gamers and also detail some advanced info on DRAMless SSDs.

Let's look at two scenarios first that everyone will be able to pick up easily. Let's say you have 99 white ping pong balls and 1 yellow ball. You put them all in a box and have to reach in and pull out the yellow ball. The DRAM makes the box really wide, so there is very little overlap of balls. You can visually see the yellow ball most of the time.

To be fair, the controller companies have done quite a bit with the limited SRAM space. It's a cache so frequently accessed areas stay in the high-speed SRAM, but the rest of the map is only on the slower flash. With more data on a drive directly linked to performance, at some point, it becomes better to divide your data between two SSDs. Even if you have a large capacity, high-speed NVMe SSD, you can benefit from storing games on a second SSD.

The 960GB BX500 didn't outright win our Final Fantasy: Stormblood game load time test, but it outperformed every other drive except for the Crucial MX500. If your goal is to maximize game loading performance per dollar, the BX500 is hard to beat. If you just want a single SSD to handle all your data, spend a little more and buy an MX500 or 860 EVO.

The 960GB Crucial BX500 is a strong SSD for loading games, but doesn't deliver similar results as a general purpose drive.