With TV's and displays getting thinner by the year, increasingly wall mounted and connected to a broad array of video devices and game consoles, the only problem left to solve is what to do with all those HDMI cables. Well, Iogear has acknowledged the problem and their new 4K wireless streaming device is effective, if somewhat inelegant solution. 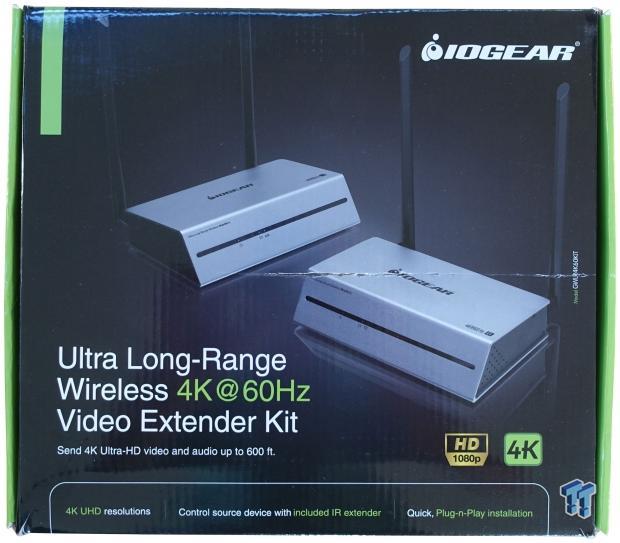 Of course, TV streaming devices are nothing new, but with the prevalence of 4K devices such as streaming boxes, game consoles, and Ultra HD Blu-ray players, the hardware has through necessity become far more advanced than ever before. Iogear's GWLR4K60KIT is the latest generation of such devices, offering 4K video at 60hz and up to 7.1 discrete channels of sound.

I've been looking forward to putting the IOGEAR through its paces ever since I wall mounted my LG OLED earlier in the year and been without an optical disc player. Yep, you can prise the disc from my cold dead hands - not even apologizing. 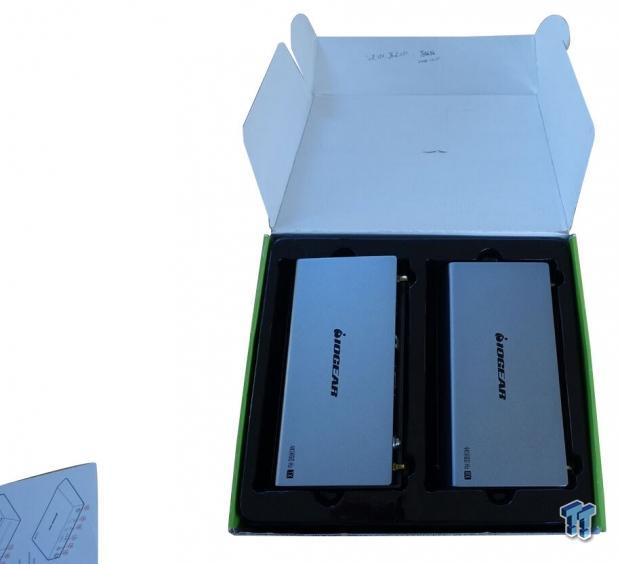 Inside the box, you'll find two short HDMI cables, two universal 100-240w power supplies, and IR blaster and receiver, four antennas and some basic instructions, as well as the main course - the wireless transmitter and receiver devices (both labeled clearly). With a heavy, all-metal body construction, a pleasant powder coating and ample passive ventilation, these things have clearly been built to last.

Getting up and running is exceedingly simple. Using the supplied HDMI cable, I connected my source device (an entry-level LG UBK80 Ultra HD Blu-ray player) to the sole HDMI in port on the transmitter, the IR cable to the relevant port and attached the two antennae. Moving to the TV side, the receiver slid perfectly into the gap between the TV mounting bracket and wall (I'll return to more securely attach the unit to the back of the TV with some double-sided tape soon) and then connected to power and a spare HDMI port. The HDMI out of the Iogear immediately initiated a handshake connection, and within seconds the main menu of the LG Blu-ray materialized. 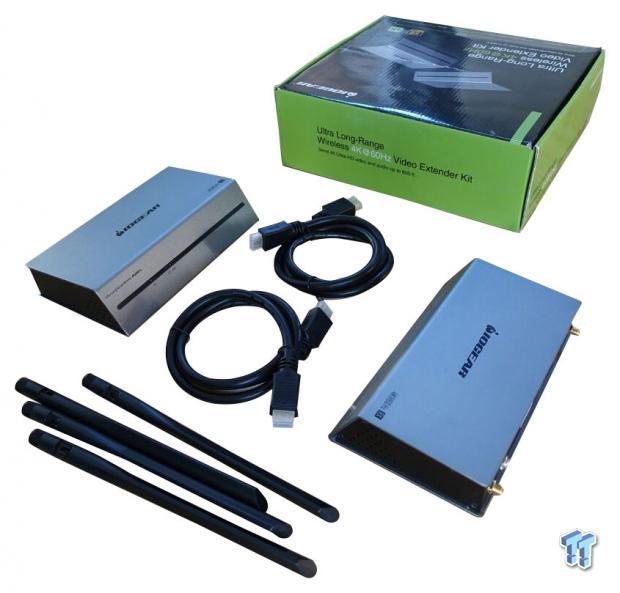 No matter the resolution of the source material, I found the image quality to be consistently excellent, stable and without any major problems. Behind the scenes, the Iogear re-encodes the source signal using the H.264 codec (rather than the 4K industry-standard H.265), which means there is an unavoidable loss of quality compared to the source, as well as introducing additional latency which may be an issue for console gamers. At normal viewing levels, the additional compression is hardly perceptible, although there were a few instances when light macro blocking was obvious and very occasionally a slight glitch where the video would pause for a few frames before catching up. Thankfully, audio sync was always locked and never a problem.

I also note that the re-encoding process strips away any HDR color space from the stream, so even if the source material is encoded with a flavor of HDR-10, HDR+, or Dolby Vision, you won't be able to view it.

While my test space is open plan and with no walls in the way, Iogear assures that the 5Ghz signal is powerful enough to penetrate through walls and into other rooms, with automatic selection of up to 78 available operating channels so as not interfere with any other signals. It certainly didn't have to encounter any issues with my 5Ghz router. 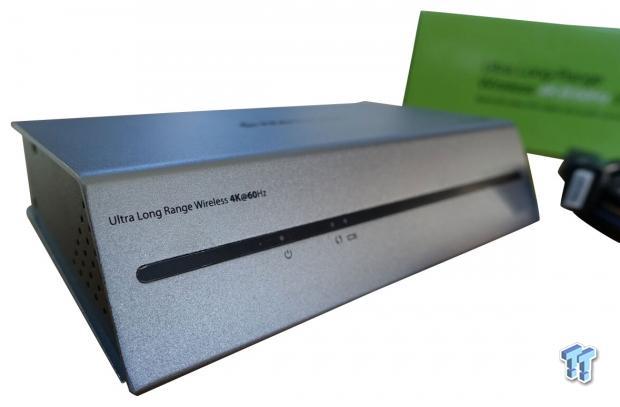 With extended use, I noted the tendency for the transmitter and receiver to get rather warm and admittedly I found the high pitch of the internal fans a little distracting when they kicked into higher gears. It was certainly audible over a sound bar at moderate levels. For the more sensitive this might prove a deal breaker, but it just made me more determined to hide the transmitter (as well as the source player) in a nearby cupboard.

I also I found that I needed to experiment with the placement of the IR blaster and receiver to get consistent results. Why consumer electronics companies haven't managed to implement Bluetooth or some other standard to replace a technology first introduced 50 years ago is a headscratcher. 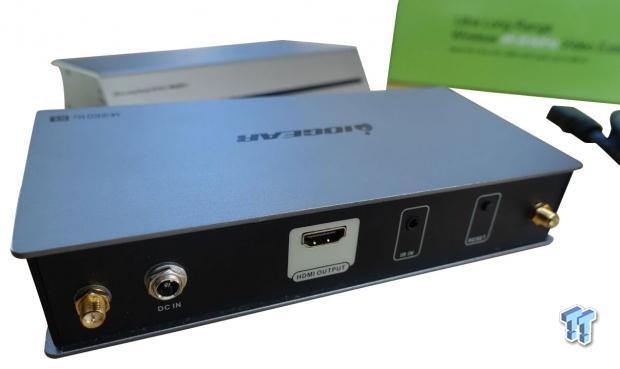 Being totally plug and play, the Iogear has no menu system, and no user options that I could find. You turn it on, and it just works as if the source device was physically connected. That's really refreshing, especially for beginners. But if you're reading TweakTown, odds are you're not a beginner and enjoy tinkering with your tech - and so do I. So the lack of any options is a little disappointing. I would have liked the ability to choose video bitrates, and at the very least to output native resolutions for variable source materials. An additional HDMI in port also wouldn't have gone astray. 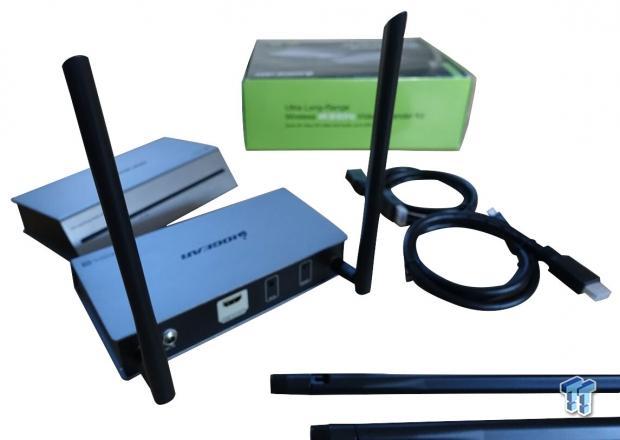 Overall, I found the Iogear GWLR4K60KIT to be a consistently solid product, which rarely broke a sweat even with the most demanding of material. Sure, there are improvements I'd love to see in future iterations; moving to the H.265 codec and retaining next generation HDR color space would be at the top of my list. But compared to its competitors, the Iogear is an excellent option and at the top of the pile, which solves a real problem in many modern lounge rooms.

The Bottom Line: Despite some minor quibbles, the unit offers excellent image quality, with stable connections that offers a real solution to a problem for many modern lounge rooms.