If you have Thunderbolt 3 available on your PC or Mac, the Solo 10G is the last NIC you will ever need.

Sonnet is a leader in professional storage systems while also having a full portfolio of enclosures adapters and accessories. In the past, we have had the Echo PCIe Enclosure, Allegro Pro USB 3.0 expansion card and others in the lab for testing. As of late 10Gbe networking is really coming into its own within the consumer networking space as prices come down making it more affordable to upgrade. Sonnet recognizes this and has launched an affordable single port option for those using Thunderbolt 3.

The Solo 10G is the latest network interface and Thunderbolt 3 solution from Sonnet. The Solo 10G aids the consumer by enabling a cost-effective solution by adding Copper 10Gbe to portable and desktop Thunderbolt 3 systems. The Solo 10G can be deployed over existing CAT5e,6 and 6a systems offering 10Gbps at 45, 55 and 100 meters respectively. In addition, the Solo 10G is NBASE-T capable, allowing the adapter to adjust performance to 1, 2.5 and 5Gbe standards based on available infrastructure.

The Solo 10G is a small form factor solution, bus powered and silent. Compatibility includes both Windows and macOS platforms. MSRP comes in at $199.99 with a one-year warranty 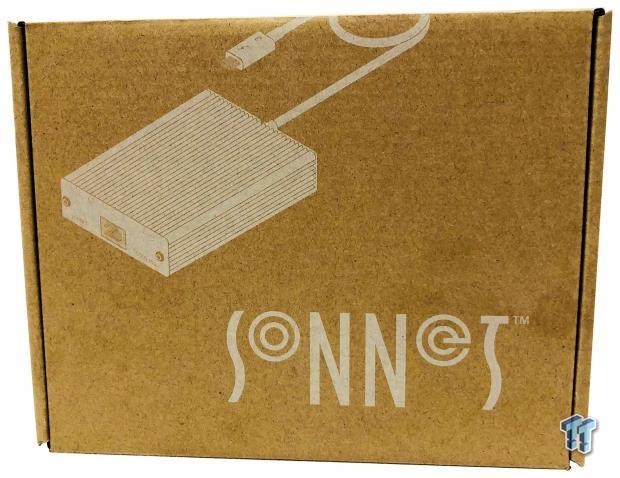 Sonnet doesn't splurge on colorful packaging. In fact, most of the products that have come through have been exactly as above, brown box with a sticker. 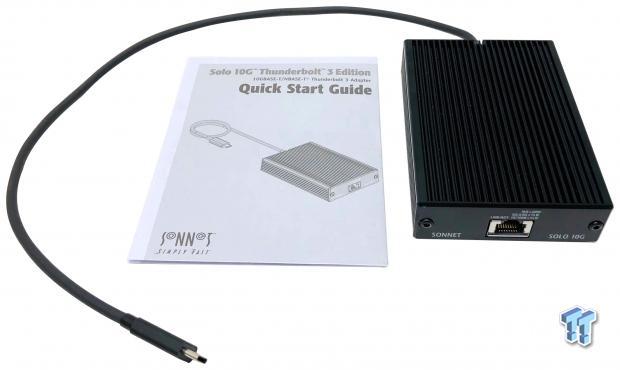 The scope of delivery includes the Solo 10G and guide. The Thunderbolt 3 cable is captured within the device.

On the end of the Solo 10g, we have the RJ45 port. To the left and right branding and above the legend for LED colors. 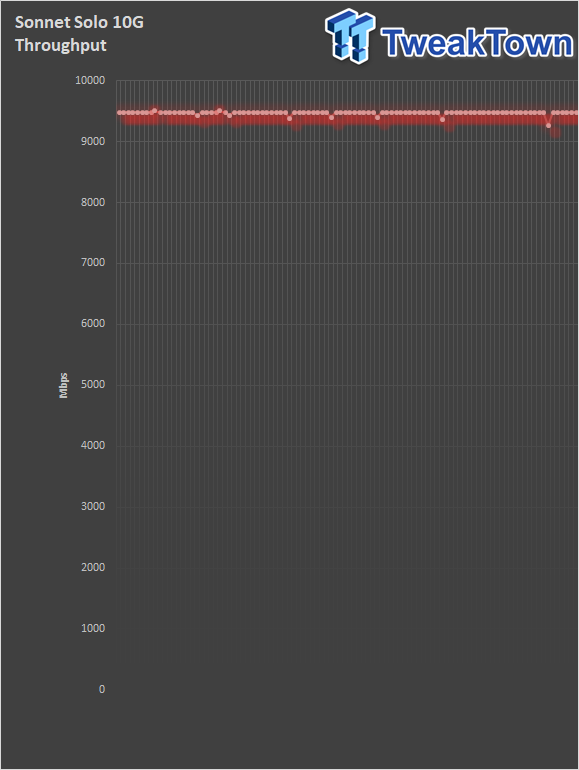 For testing, we hammered data back and forth between the Solo 10G and our ASUS XG-C100C for an hour. As you can see the Solo 10G was very capable of hovering at 9.5Gbps with a few bumps along the way.

The Solo 10G is a remarkably handy device, even for those that use a desktop platform. For me, I don't want to commit to having a 10Gbe card take up a PCIe slot so with my system having Thunderbolt 3, the Solo 10G is a great way I can add 10Gbe when I need it for transferring large files across the network and tuck it away in a drawer when not in use.

The build quality of the Solo 10G is top notch, the exterior guides heat away from the Aquantia AQC-107S via its heat sink design. The all-metal enclosure goes a long way to making the Solo 10G indestructible while the captured Thunderbolt 3 cable means you won't have to search for the cable and if it does get damaged, a few screws and you can swap it out.

Overall, my experience with the Solo 10G was fantastic. With it being such a small device, dimensions at 3.1 x 4.5 inches weight just over a half pound, it lends to the portability of the unit as I found myself putting it in my shirt pocket or in the top pocket of my backpack for traveling. Installation was a simple driver install that took a minute after which I was ready to sling data across the network 10x faster.

The Bottom Line: If you have Thunderbolt 3 available on your PC or Mac, the Solo 10G is the last NIC you will ever need.

Newsletter Subscription
We openly invite the companies who provide us with review samples / who are mentioned or discussed to express their opinion. If any company representative wishes to respond, we will publish the response here. Please contact us if you wish to respond.
The Response:

- When used with a Mac running macOS High Sierra (10.13.4) and later, device drivers are part of the OS, so the Solo 10G is a plug and play device.

- Deployed over CAT6 and 6A systems, the Solo 10G supports 10Gbps at 55 and 100 meters, respectively. In addition, the Solo 10G is NBASE-T capable, allowing the adapter to adjust its performance to support 2.5 and 5GbE standards over CAT5e or better infrastructure at distances up to 100 meters.