About a year ago we were in the beginnings of the Mesh Wi-Fi platform launch for many vendors. This included Linksys and Velop one of the top Mesh platforms of 2017. The Velop Dual-Band is the second iteration of the popular Mesh platform from Linksys, this time around a much smaller footprint for each node allowing them to blend into your home. In addition, Linksys has aimed to lower the cost of entry for many users creating an entry-level solution for those that didn't need the Tri-Band features of the original Velop platform. 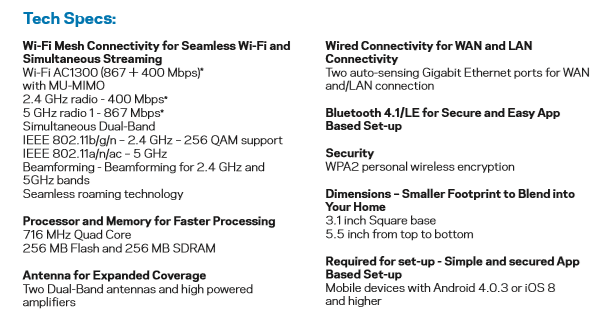 Specifications for the Velop Dual-Band platform include each node being an AC1300 class device. This means across a three-node platform the entire system falls into the AC3900 class. That said we have 400Mbps on the 2.4GHz band and 867Mbps on the 5GHz band just as we did on the original Velop. The 2.4GHz band supports 256QAM while both bands support beamforming and seamless roaming technology.

MSRP too has changed quite a bit, with this new platform available at $129.99 for a single node, while two and three node systems coming in at $199 and $299 respectively. Each of these solutions carry a three-year warranty from Linksys. 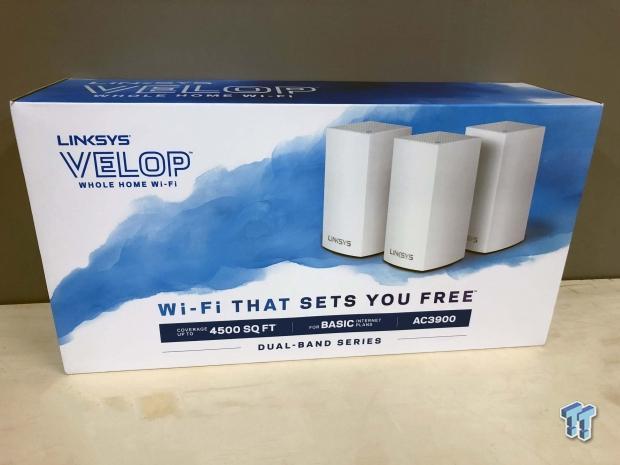 Packaging for the Dual-Band solution gets a makeover, removing the pink hues of the original Velop system. We still have the nodes pictured on the front and along the bottom, we have coverage at 4500 sq ft. 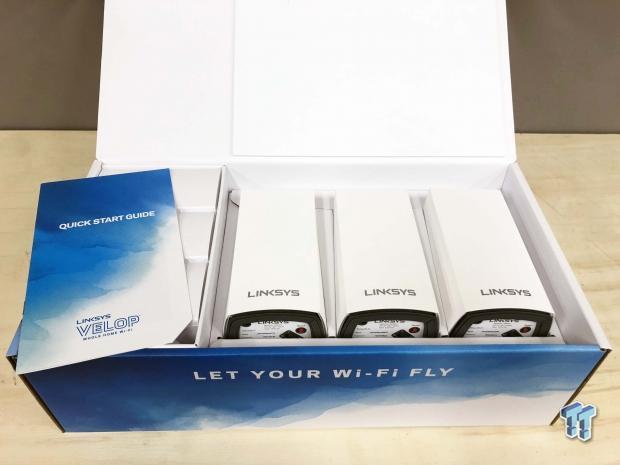 Internally, Linksys has once again kept things clean with the Velop. We have each node in its own tray and the power adapters boxed separately to the left. 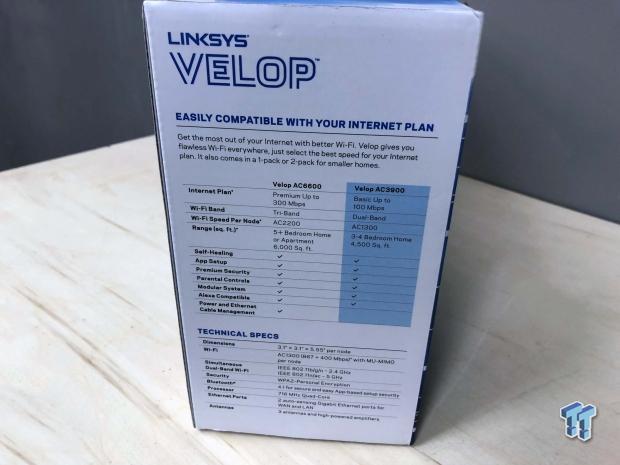 The spine of the box gives a comparison between both Velop models. 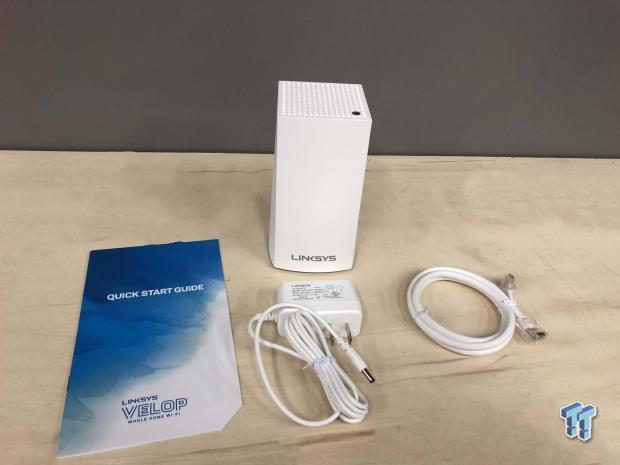 The scope of delivery includes an ethernet cable, power adapter, and node. In the box depending on your kit, you will have a power adapter for each node purchased. 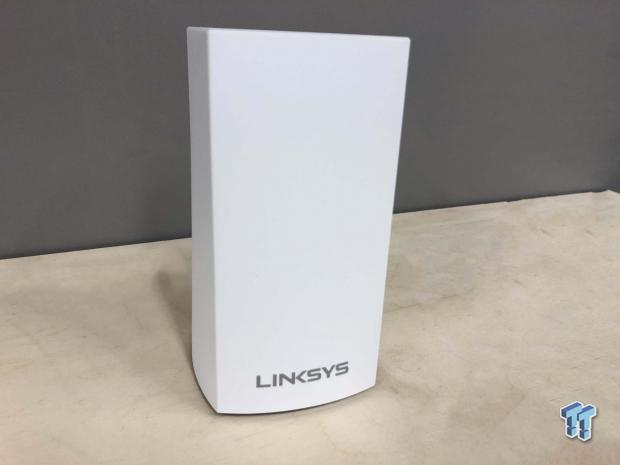 Each node has subtle branding with a simple Linksys logo at the bottom. 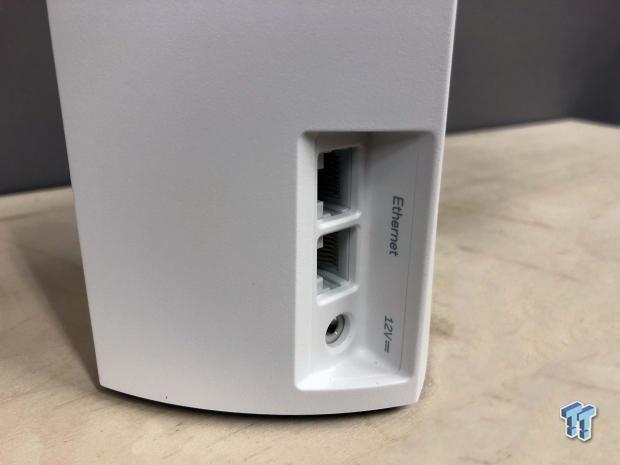 The backside houses both ethernet ports with auto sense technology allowing the node to detect if one port is being used for WAN. 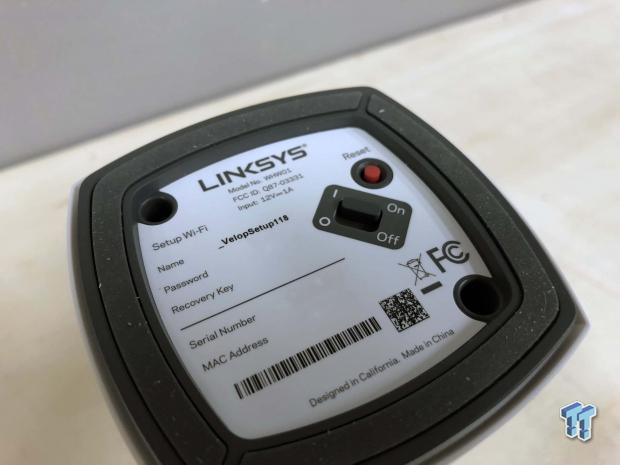 On the bottom of the Velop, you will find a power switch and reset button along with default SSID, password and recovery key.

Management of the Velop can be done with the Linksys app seen above. We are using an iPhone X for this review.

The basic setup gives you the option of router or Velop system.

We then choose what we were using prior to this new system to allow the wizard to guide appropriately.

We then go through several other steps to arrive here with our Node ready to be setup blinking purple.

Following the guide, we go through password and SSID setup to arrive here with a successful setup.

The dashboard for the Velop gives an overview of connected devices, Wi-Fi Networks along with parental controls and device prioritization.

Device prioritization gives us three devices to hold above all others when it comes to traffic on the platform.

Linksys has included a feature that checks your wireless network space and changes your channels accordingly to give you the best possible performance.

Speed Check is a built-in throughput checker for your broadband connection. 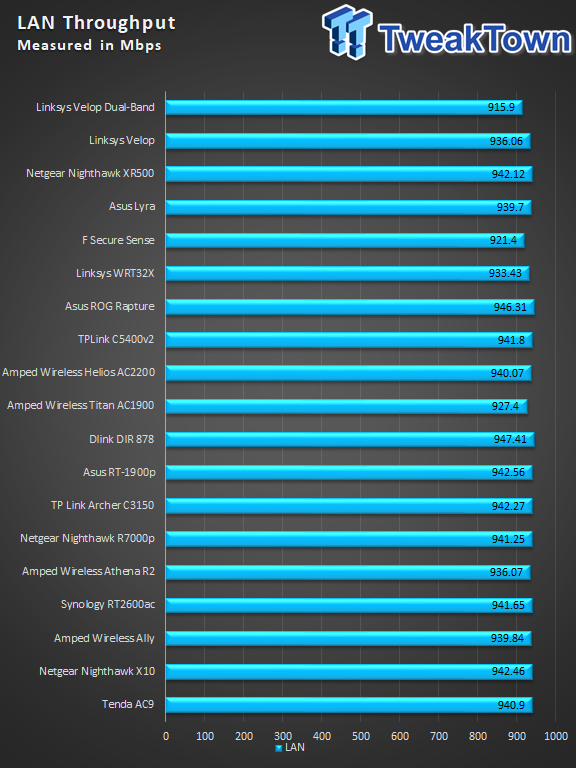 Wired throughput for the Dual-Band Velop platform came in at 915Mbps, this was just under the 936Mbps we received with the original Velop platform. 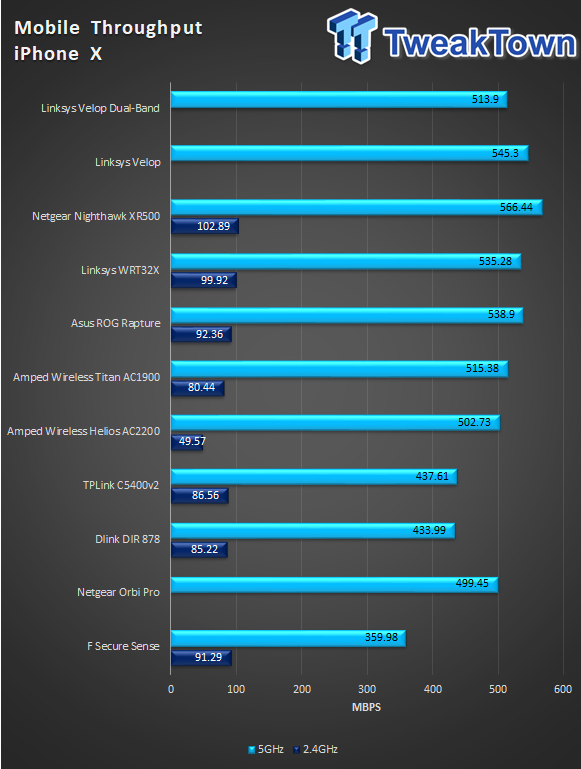 Mobile Throughput testing with the iPhone X gave us 513Mbps with the Velop dual-Band. This is down only slightly when compared the original Velop at 545Mbps. Overall when we look at tall platforms the Velop DB performs better than 50% of tested solutions. 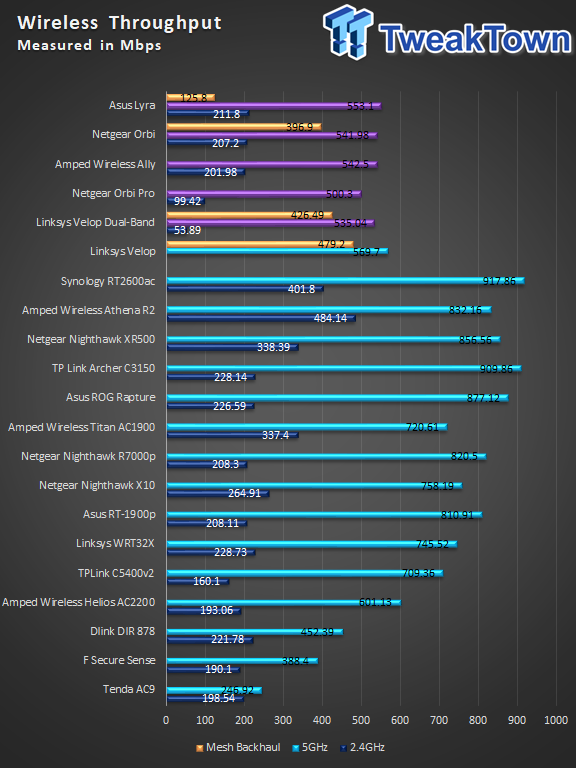 Last, we have wireless throughput. Starting with 2.4GHz testing which for this unit had to be done with a legacy adapter that was 2.4GHz N capable only, the USB-N13 from ASUS. This gave us throughput of 56Mbps in testing which was quite a bit lower than competing solutions. Moving over to 5GHz we were able to put our PCE-AC88 back to work and with this solution reached 535Mbps which is on par with competing mesh platforms and even the original Velop platform.

Looking at the orange bars on the chart, we take a look at the backhaul of the platform. This involves two PCs, each connected to a node with a wired connection. The Dual-Band Velop offered up 426Mbps between nodes at 15ft. This compares to the original Velop which offered 479Mbps and the Orbi from Netgear that came in at 369Mbps.

I've had the Velop Dual Band in house for about a week so I'm not fully versed in how the unit is going to operate over long periods of time but in the week that I have had it, its been the backbone of my entire home network.

Like many of you I stream all of my content including Live TV through PS Vue and my daily catalog of content on YouTube, Netflix and Hulu. Through all of that this platform has done quite well, with only a few times where YouTube had issues buffering.

Looking at our benchmarks of this platform, the Velop Dual Band does quite well in LAN throughput reaching 915Mbps and Mobile throughput with our iPhone X at 514Mbps. Wireless throughput had low performance with 2.4GHz likely due to the adapter used for testing, that said Linksys uses one SSID for both bands so there is no easy way to choose the band you want to connect to.

With that the Dual-Band reached 56Mbps in our 2.4GHz testing. Moving over to 5GHz we saw numbers on par with previously tested Mesh platforms, the Dual-Band reaching 535Mbps. That said the wireless backhaul between nodes is significantly lower at 426MBps presenting a possible bottleneck in the system if used completely wireless.

The Linksys app for iOS does a superb job of aiding the setup process but even more the dashboard gives you a quick overview of internet connectivity and devices connected. Parental controls are right at your fingers tips and the ability to give priority to three devices is a great addition. After all of that my favorite feature is certainly the Wi-Fi Channel Scanner that automatically optimizes your connection along with the built in speedtest.

The Bottom Line: With performance on par with many Mesh platforms currently on the market, the Velop Dual Band offers a low cost of entry for consumers on the fence.