For the consumer that utilize multiple drives in multiple boot environments or on that same token multiple drives for backup of their data, the ability to manage the power state of your drive is a welcomed addition. This option is especially useful for those that need to power on a drive for archiving after which the drive gets powered down, saving power and drive life. The Kingwin HDD-PS6 does just that.

For many years, Kingwin has produced cost effective solutions for consumers. These solutions typically focused on the storage side of the market with devices such as docks and enclosures but have recently added adapters. With their product portfolio expanding, Kingwin has now introduced a rather simple device that can power on and off any SATA hard drive or SSD.

The Kingwin HDD Power Switch is a 5.25" bay solution. It takes power from your computer's PSU in the form of either SATA or Molex connections and produces six ports of power connectivity. These six ports or drives can then be powered on or off via the device's front panel buttons. For convenience, the Kingwin Power Switch houses blue LEDs mounted below each power switch to confirm powered on drives.

Compatibility is quite simple. It only requires a chassis with an open 5.25" bay. 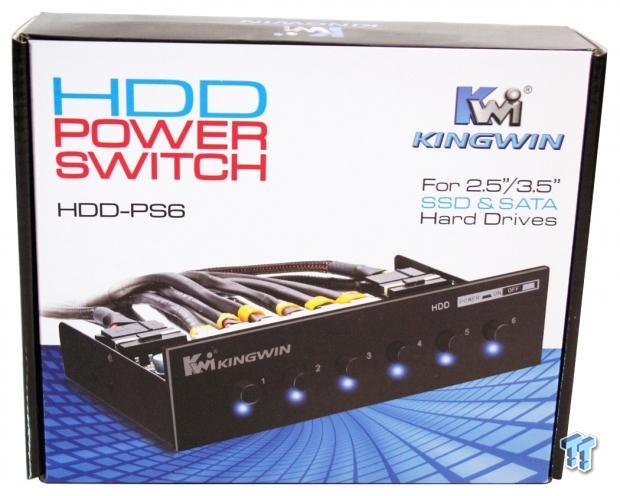 To start off, we first take a look at the box art. Kingwin has supplied an image of the device centered with no real marketing information, but rather a simple description to the right. 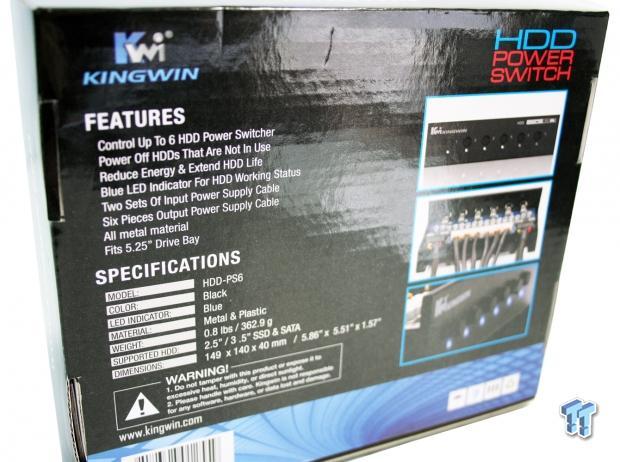 The back of the box lists features along with device specifications for the Power Switch. 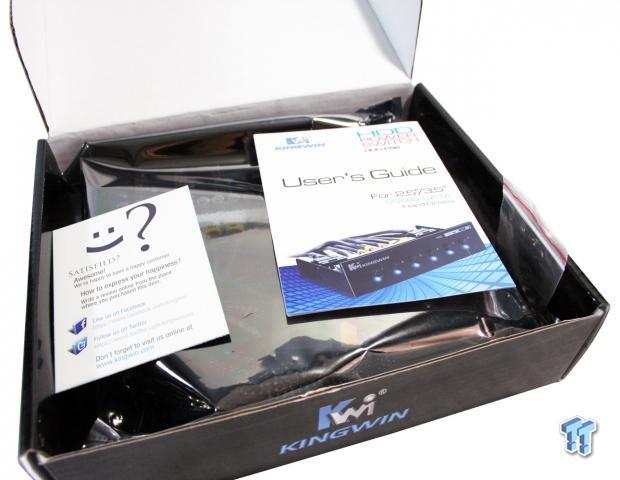 Unboxing the power switch, we found the device wrapped in an anti-static material with a user guide on top. 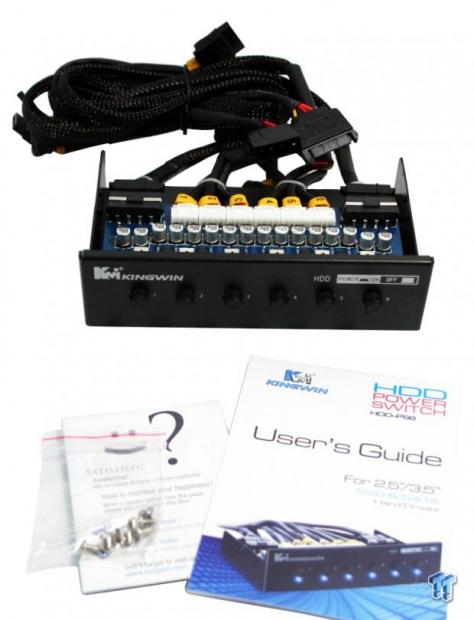 Pulling everything out, we have the scope of delivery that is quite simple and includes the power switch and its wiring along with the user guide.

The front panel for the device houses six large switches that do take quite a bit of pressure to push, so you certainly won't be turning drives on accidently. As we mentioned in the opening, each of the drive switches carries an LED to denote its status. It's also worth mentioning these switches seem to have some mechanical feel to them as you will see in later images. 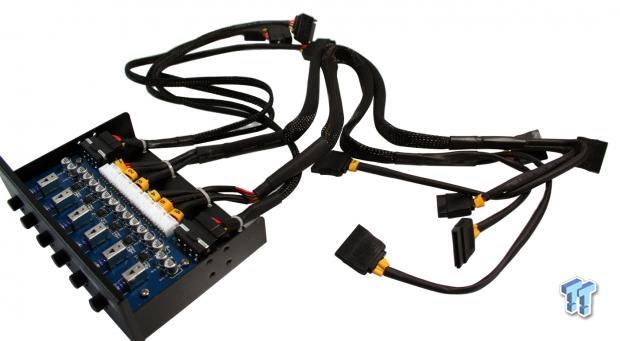 Taking a look at the internals, you can see incoming power regulated by two capacitors along with the outgoing power, which should soften the powering on of a drive and lessen the surge effect.

This last photo above will roll into my final thoughts on the power switch, as this is a quality control issue in my opinion. As you can see in the past few photos, Kingwin has taken every step to produce a quality product. They have used a steel chassis for this device, produced a nice looking PCB with power regulation and added aesthetics with LEDs and nice "clicky" switches. The Molex power connectors are the quality type that hold the pins in place. You can plug in your power cable without mucking about for 30 minutes.

With that said, somewhere along the line where this device was manufactured, a heat gun quit working mid assembly and half of the sleeving is loose and not secured by the surrounding heat shrink. Similarly, half of the heat shrink used is too big as is the sleeving itself, and this makes for an unbalanced product. Most of the device carries outstanding build quality, then you look at the cables and wonder what happened.

Alas, after installing the device, which does take some patience if you are one for cable management, you'll find Kingwin took drive placement into consideration. They offset the wire lengths so that in a chassis each power lead coming from the device has just the right length. After using this device in my personal system for the last two weeks, I can say that the switch does perform without issue. I have a set of drives I power on regular intervals to backup a few terabytes of data after which are powered off. This solution does the job quite well, provided you enable the hotplug feature in your motherboard's BIOS.

As of this writing, Kingwin has set the MSRP of the HDD Power Switch at $29.99 with a one-year warranty.

The Bottom Line: The HDD-PS6 Power Switch from Kingwin is a good device that does its intended job quite well, but it does suffer from some quality control issues.