Jettisoning superfluous words such as 'and', 'fast' and 'the', but now simply marketed as 'Furious 7' (I fully expect the next film to be titled F-8 or the significantly simpler 8) has gone from strength to strength, with each title consistently grosses more than the last. Still, money isn't necessarily an indicator of quality - just look at the success of this year's Fifty Shades of Grey. So, how exactly does Furious 7 fare?

Following on from the events of its predecessor, Furious 7 finds the Dom (Vin Diesel), Brian (Paul Walker) and Letty (Michelle Rodriguez) and company acquitted of their past after their role in taking down mercenary Owen Shaw, and settling into civilian life once again, with Brian and partner Mia adjusting to life as parents. But when Shaw's brother Deckard (Jason Statham), a ghost-like rogue special ops assassin vows to take revenge, the crew will have to regroup to survive. 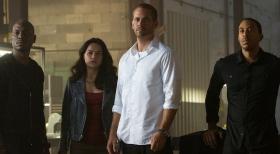 I'll be honest - I've never thought myself as the target demographic for the Fast and the Furious franchise. I'm not a car fanatic and don't fall into the street smart, hip hop counterculture that the cool kids seem to eat up. Still, I certainly respect a series that's continued to grow in scope, ambition and popularity over the years - just know that my review comes from the point of view of a 'non-fan'. That said, there's no getting around the fact that Furious 7 is a flat out ridiculous film, filled with frustrating set pieces that unravel without reason nor explanation, baffling leaps in logic, confusing location hopping, appalling acting, poorly rendered CGI, and just sheer all round stupidity. But admittedly, it's also undoubtedly a spectacle and as close as we now get to the similarly over the top action films of the 1980s. 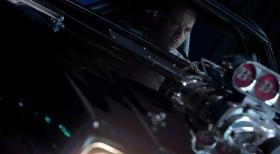 My biggest complaint is reserved for the fact that its frequent excesses signal clearly that this is not a film that should be taken seriously, but the tone continually implies otherwise. Tone is a difficult concept to critique and it's not something I normally discuss - normally working on a more subconscious level - but it's nonetheless very important. That smiley face you type following a brutal message? That's tone. Examine Dwayne Johnson's performance - it says 'I'm having a laugh'. Then compare that to Vin Diesel's overwrought seriousness. If the audience can't appropriately translate the tone through these visual cues, they don't know whether to enjoy the ride or take it literally. There's also precious few moments of levity which only reinforce these mixed signals. 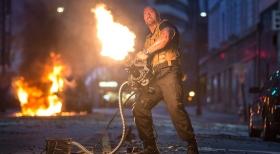 As with any action flick worth its weight, there's plot holes aplenty, but Furious 7 seems proud to take it to a whole other level. Take for example the opening sequence, where it is implied that Shaw has practically demolished a hospital, before telling the cowering doctor and nurse to "take good care of my brother". Sure, we get it - he's a big bad guy, and powerful too. But how can a destroyed hospital hope to provide adequate medical assistance? Not a great start. I'm not even going to attempt to elaborate on other such poorly plotted sequences, such as the one visualized on the theatrical poster.

The elephant in the room throughout proceedings is obviously the mid-production passing of franchise star Paul Walker. Although it's clear that he doesn't appear in the film as much as he would otherwise, director James Wan, Walker's brothers and the CG artists at Weta Digital have done a superb job at finishing his performance. In a touching final sequence, Vin Diesel's character eulogises both Walker and his character in a subtly fourth-wall breaking line "things will be different". I can only hope he's right. While Furious 8 is a certainty, I only hope that the next entry might eschew some of the more fantasy elements seen here, show a smidgen more maturity and perhaps a little more levity. But with a seemingly 'winning' formula, I won't hold my breath for any such breakthroughs. 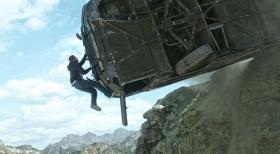 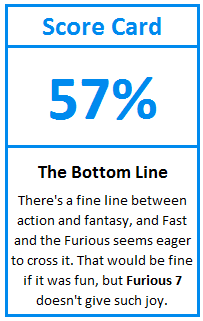