Over the years, Hollywood has taken multiple passes on the topic of artificial intelligence, normally associating with dark dystopian futures such as 'Blade Runner', 'The Terminator', 'I, Robot' and 'The Matrix' and an emerging threat to humanity. Sure, there's been good robots too, like C-3PO in 'Star Wars' and Pixar's adorable 'Wall-E', but no film has attempted to tackle the topic quite like Neill Blomkamp's 'Chappie'. 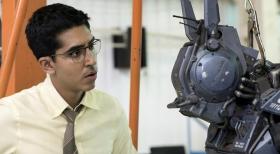 In Johannesburg, the local police force has significantly reduced the rate of crime by the deployment of armor-plated robots designed by Tertravaal's Deon Wilson (Dev Patel). Developing the breakthrough technology further, Wilson approaches the company's CEO, Michelle Bradley (Sigourney Weaver), to allow him to test an experimental AI firmware on a lone drone, but when his request is denied, Wilson surreptitiously deploys the software on a deactivated unit.

Whilst successful, the robot is quickly discovered by a couple who want to use the robot for nefarious purposes, and when Patel is stalked by a fellow jilted designer Vincent Moore (Hugh Jackman), Wilson must put his own safety at risk to liberate the emerging intelligence. 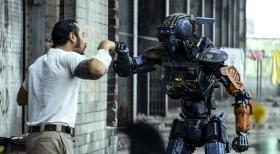 Attached for many years to the abandoned Halo motion picture, under tutelage from Lord of the Rings director Peter Jackson, advertisement director whiz kid Neill Blomkamp finally broke out with 2009's District 9, a landmark picture which on a shoestring budget of just $30 million achieved remarkable visuals and established Blomkamp as a master storyteller in his own right, fusing complex intertwined themes such as transhumanism, race and discrimination into the shell of a sci-fi action blockbuster.

Hollywood quickly noticed the emerging talent and Blomkamp soon followed up with the flawed, but ambitious Elysium for Sony Pictures, which with a budget four times higher than District 9 only grossed $70 million more at the international box office. With Chappie, Blomkamp returns to his familiar South African surroundings for a third time, but also throws the issue of artificial intelligence into the mix. 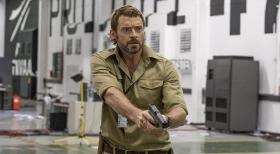 Chappie has clearly polarized the world's critics, with a 30% rating on metacritic Rotten Tomatoes, which gives it a 'rotten' rating. Sure the film isn't perfect, with random tonal shifts and some poorly crafted characters - Sigourney Weaver is all but wasted in her role and Hugh Jackman's overwrought Australian 'accent' is awfully cringe-worthy (seriously, I expected him to request "another shrimp on the Barbie!" at any time).

Despite this, the film was always going to live or die by the response to the titular robotic protagonist, so it's a relief that Chappie is an utterly convincing CG creation, with an emotional and nuanced motion capture performance provided by Sharlto Copley (who also provides his voice) which really helps sell Chappie as a living, learning character in his own right.

Overall, I found Chappie to be an intriguing, thought-provoking and exciting film which raises some interesting questions, especially in light of AI concerns raised by the technology luminaries such as Elon Musk, Bill Gates and Steve Wozniak. Now, Blompkamp has explored similar themes for his first three films, I'm looking forward to his take on the Alien franchise in the first installment in nearly twenty years. 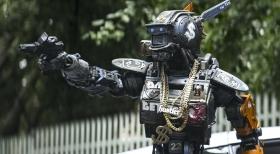 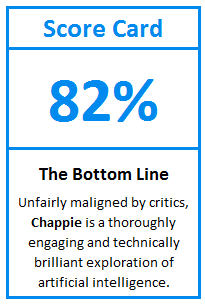