Ever since I took the reins of being the Audio Editor for TweakTown, I've received a bunch of different portable speakers from companies I've either never personally dealt with before, or flat out never heard of before. LuguLake is one of those, who sent me their latest Portable Bluetooth Speaker that has a stand for your smartphone or tablet - and it's kinda useful.

Not only is Lugu Lake a lake that is found in the North West Yunnan plateau in the center of Ningliang Yi Autonomous County in the People's Republic of China - thanks Wikipedia - but they're a company who make mobile accessories, like portable batteries and what we have here today, a portable speaker.

Not only that, but the company makes an insane amount of products, ranging from Stone Stainless Steel Fingernail/Toenail/Nail Clippers, to Waterproof Dog Coats and everything you can possibly imagine in-between.

With the Portable Wireless Bluetooth Speaker, LuguLake has built a simple, but useful portable speaker. We have a simple, yet functional and fashionable design that uses a metal texture - something that feels great to touch. Stereo speakers are found inside of the LuguLake BT-10, which is the product model - we'll call it the BT-10 from now on. 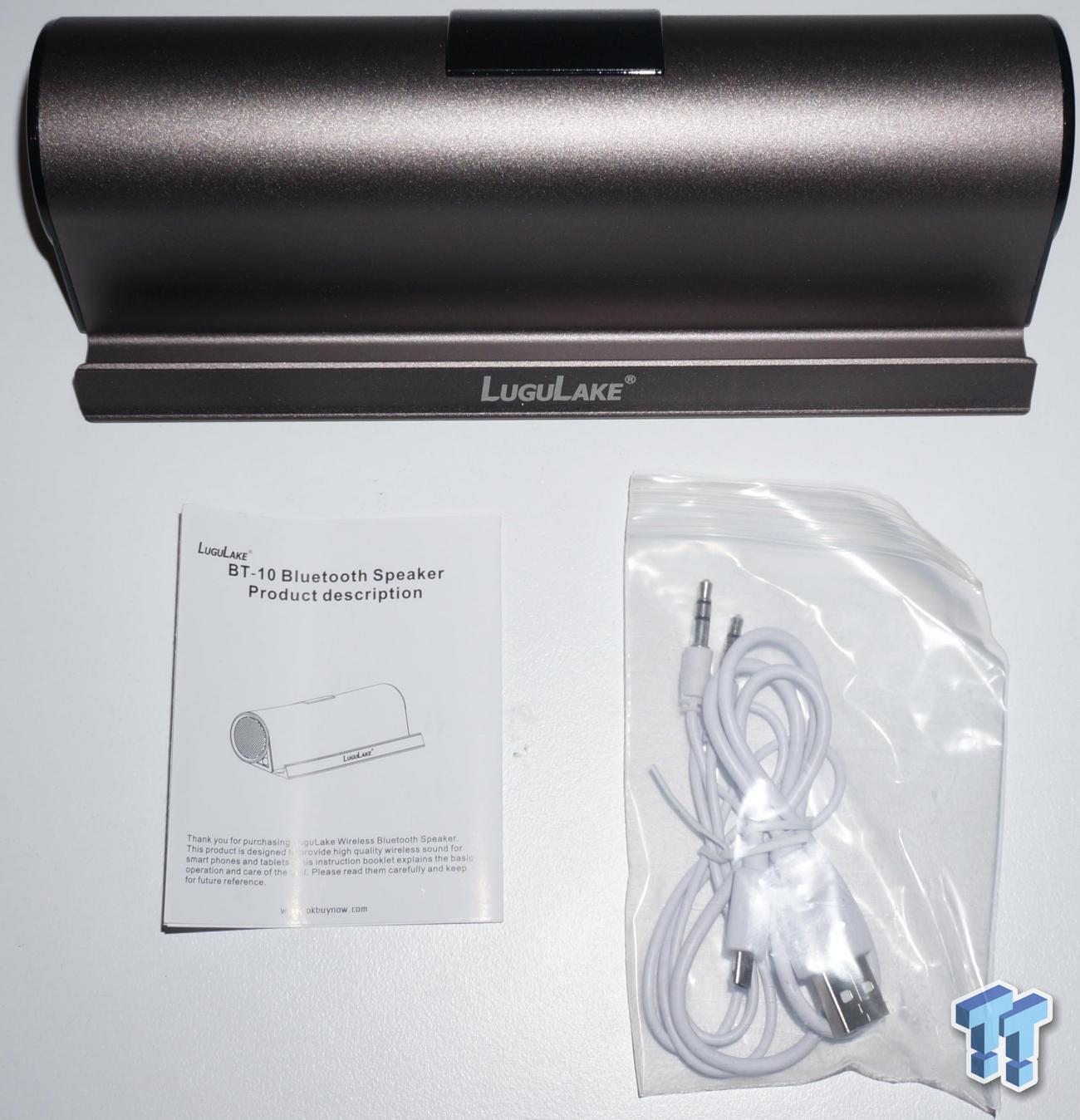 The LuguLake BT-10 speaker has stereo speakers with a maximum transmitted power of 4dB, Bluetooth 3.0 makes the connection between your smartphone or tablet and the speaker possible, but a 3.5mm jack makes the cut - something that should be applauded. It is charged by a micro USB port at 5V, measures in nicely at 200 x 80 x 42mm, or 7.87 x 3.14 x 1.65 inches and weighs in at just 313g, or 0.69lbs.

Now we're going to take a closer look at the LuguLake BT-10 speaker, starting from the front.

At the front, we have the LuguLake branding at the bottom, and just behind that we have a nice spot for placing your smartphone or tablet. 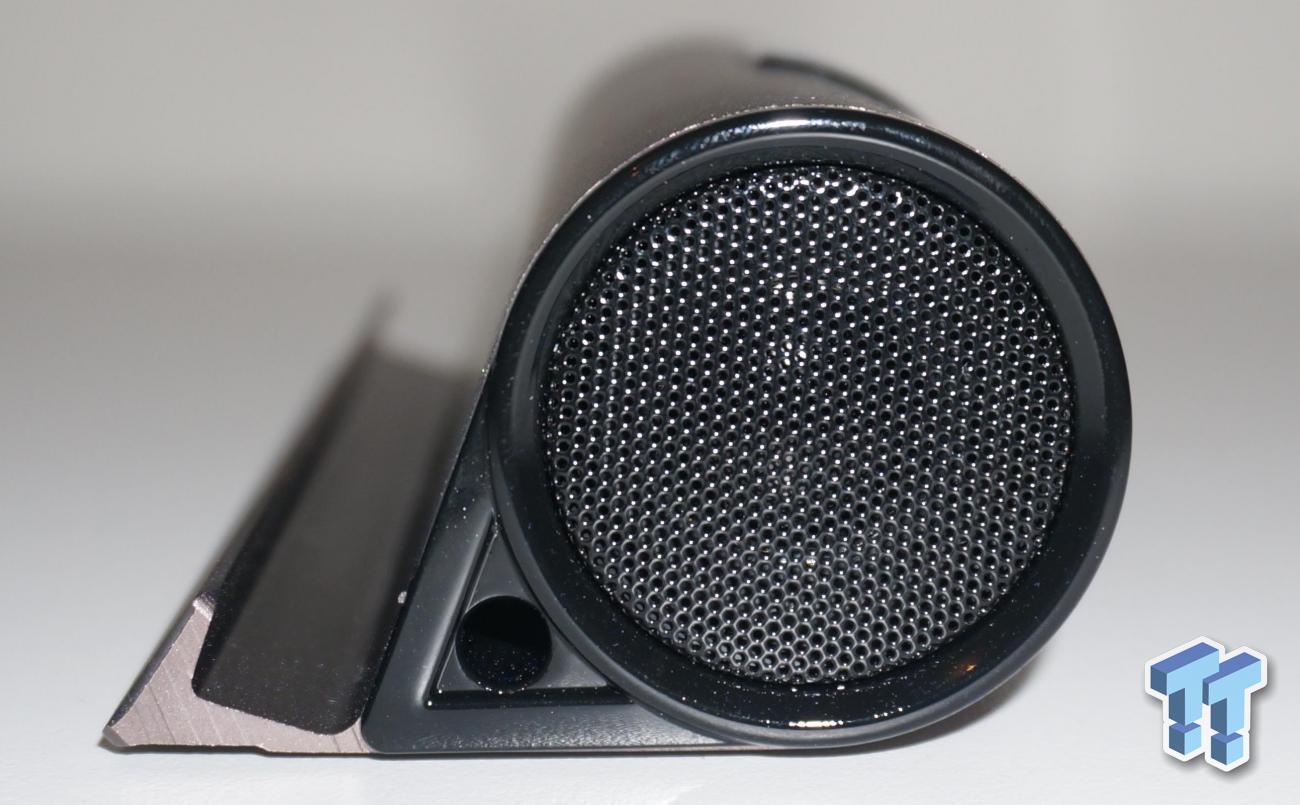 To the side, we have the speaker.

On the back, we have an LED to notify you it's on charge, an on/off button, auxiliary in, and DC in to get it charged up.

The design of the LuguLake BT-10 is nice and simple, with a stand for your smartphone or tablet to lay on so that you can quickly walk past the BT-10, slap down your device, and have music blasting out. It's a great way to quickly get music playing, especially when you've got some friends over.

Other than that, the design looks good, but it's basic. For $39.99, this is about what I'd expect, but it is on more of the expensive side of things, even for a cheaper speaker.

PRICING: You can find the LuguLake Portable Bluetooth Speaker, with Stand function Wireless Stereo Speaker Built-in 3.5mm Aux Port for sale below. The prices listed are valid at the time of writing but can change at any time. Click the link to see the very latest pricing for the best deal.

I used the LuguLake BT-10 in two different environments, in my quiet office, and outside with a few friends around. Inside of my office, there were no problems at all. The sound was enough to fill my room with audio, to be able to hear it from all corners nice and clear.

When it came to sitting outside with some friends and the BT-10 blasting away, it did a good job of filling the area we were sitting in with audio, but it definitely didn't perform as well as it did in my quiet office.

For those who want to sum up the entire review in a few points, the What's Hot and What's Not part of my review will help you. Skip right to this bit if you want a quick read, or if you want to find out what I found to be the most notable parts of the BT-10, we're going to jump into that right now.

A Different Design: The truth is, the LuguLake BT-10 looks far different to what I'm used to reviewing when it comes to portable speakers, but I really enjoyed its look.

Large Phone/Tablet Stand: The best thing about the BT-10 would have to be its stand. I was able to slot my Xperia Z2 on it, as well as my Z2 Tablet (a 10-inch slate at that) without a problem. Large enough to not worry what phone or tablet to be placed on it.

Expensive: For what it is, the BT-10 is expensive. If it had better sound, I'd definitely think twice, but at $90, it's just too expensive. Even though it's on sale right now with Amazon at $39.99, the original price that LuguLake are charging for it is $89.99. If you can still get it at around $40, you could consider it.

PRICING: You can find the LuguLake Portable Bluetooth Speaker, with Stand function Wireless Stereo Speaker Built-in 3.5mm Aux Port for sale below. The prices listed are valid at the time of writing but can change at any time. Click the link to see the very latest pricing for the best deal.

The Bottom Line: LuguLake needs to show improvement in its next speaker, with the BT-10 being less than impressive. It is built well, sounds fairly good, but it's still lacking. A retail price of $90 doesn't help, even if it's on sale for $40.