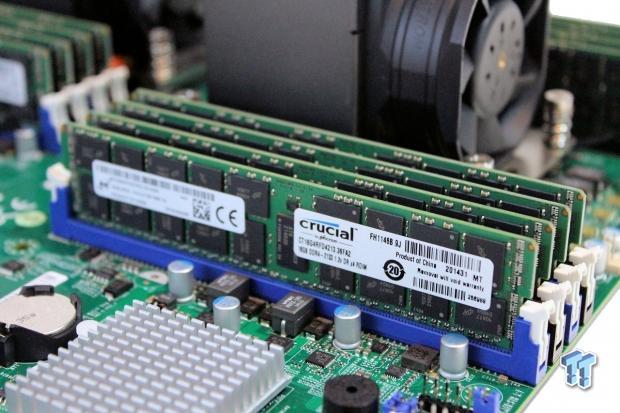 We have been running Intel Haswell-EP based systems in the lab for a while now in the lab. With the new processors came many extra cores that we did not have with the Ivy-Bridge-EP systems. We have gone from a max of 12 core CPU's to now 18 cores. We found that some of our tests, namely CPU2006 started to require large amounts of RAM in order to complete.

When using the Xeon E5-2698 v3 on dual-processor setups, we had 32 cores and 64 threads with hyper threading turned on. We found that using 8x sticks of Crucial 8GB DDR4 that we originally started out with was not enough RAM to complete some tests. We then upped our RAM load out to 16x sticks of 8GB Crucial DDR4 RAM, this gave us 128GB of RAM that could fit on a motherboard that had 16 RAM slots.

Even with this RAM load out, we found ourselves cutting RAM usage very close to the full 128GB. We knew then that when we test Xeon E5-2699 v3 CPU's with 18 cores, we would not have enough RAM to complete our tests.

The logical solution was to move to higher density RAM sticks and we would need 16x sticks of 16GB Crucial DDR4 for this. That would give each system we test with 256GB of RAM. Back in August, we looked at the performance of Crucial's 8GB DDR4 memory sticks.

The Crucial DDR4 memory sticks that we will be testing today are a set of 16 sticks with the part number of CT16G4RFD4213. These sticks are 16GB DDR4-2133 1.2v DR x4 RDIMM modules, they are dual ranked, and have a CAS of CL15. These memory sticks are ECC type memory; they have parity modules that correct errors in data.

The CAS CL15 rating refers to the number of clock cycles it takes before data starts to flow after a command. A lower CAS CL rating would mean the RAM is faster. The sticks have a component configuration of 2048Meg x 72; this indicates the size of the memory chip components on the module.

The speed of these memory sticks is rated at 2133 MT/s. This refers to MegaTransfers per Second, which is a measurement of bus and channel speed in millions of effective cycles per second. MT/sec is a rating of the actual delivered speed, rather than the speed of the interface clock. The MT/s is normally twice that of MHz by double sampling, one on the rising clock edge, and the other, on the falling. When we see a CPUz screen shot, the DRAM Frequency will show half of the MT/s rating and measured in MHz. 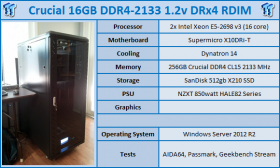 We would like to thank Supermicro, Crucial, NZXT, SanDisk, AIDA64 and Primate Labs - Geekbench for their support in providing parts for our test system.

For our testing of DDR4, we will be using the Crucial DDR4 16GB 2133 MHz CL15 sticks in different combinations. We will go by the preferred memory setup guide for optimal performance for the Supermicro X10DRi-T motherboard. 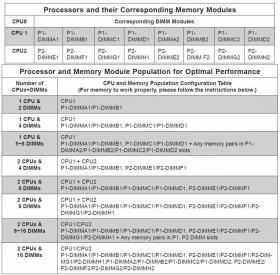 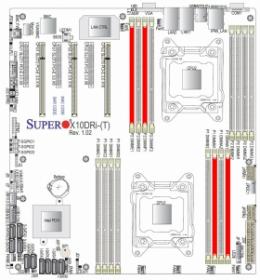 The slots marked in red will be used for 4x memory stick configurations. This will result in dual-channel mode for memory and gives the system 64GB of RAM. 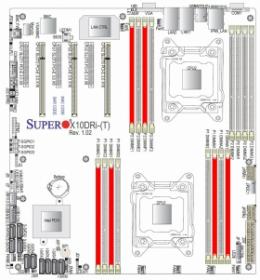 The slots marked in red will be used for 6x memory stick configurations. This will also result in dual-channel mode for memory and gives the system 96GB of RAM. 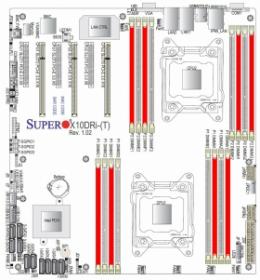 The slots marked in red will be used for 8x memory stick configurations. This configuration will result in quad-channel mode for memory and gives the system 128GB of RAM. 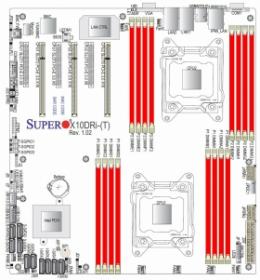 For the last test, we will use all 16x memory slots. This configuration will result in quad-channel mode for memory but will drop our memory speed down to 1866MHz. This gives the system 256GB of RAM. 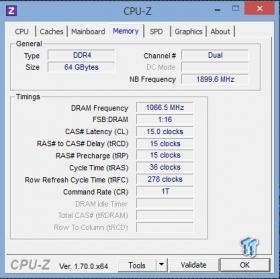 For all memory configurations except the 16x memory sticks, we see the same memory specifications shown in CPUz. DRAM frequency will be 2133 MT/s and timing will be CL15. 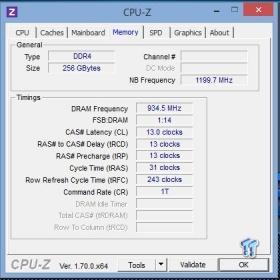 With all 16 memory slots filled with RAM, we see the DRAM frequency drops to 1866 MT/s. This is true for all motherboards when they are fully loaded with RAM. Also notice that the CAS CL rating drops to CL13, which is faster than CL15. Let us get started with AIDA64 Memory test to see where we stand. 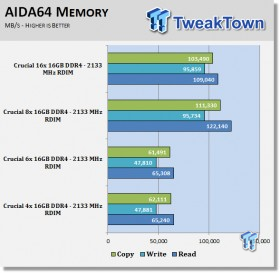 The highest density test configuration using all 16 RAM slots is running in quad-channel mode, but the memory speed drops to 1866MHz, resulting in a slight drop in performance.

PassMark performance test runs 32 tests including CPU, 2D & 3D graphics, disk, and memory tests, to come up with an overall system ranking that allows you to determine how fast your computer is in comparison with other systems. For our Passmark 8 tests we will be using the memory test only. 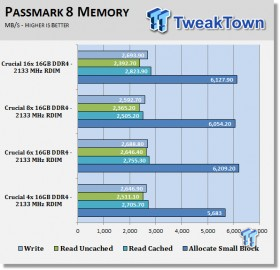 Passmark shows slightly different results. All tests are about equal here except for the 4x stick configuration with Allocate Small Block results. 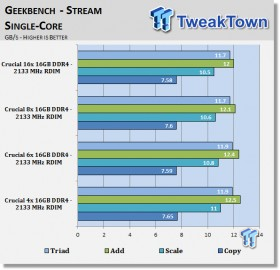 Here we see all single-core results are about equal. In this test, memory capacity and channel mode plays no significant role as only one core is used and memory is able to keep up with this with out issues. 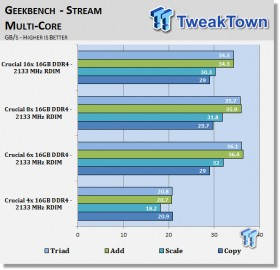 When we move to multi-core tests, we see results are about equal, except for the 4x memory stick configuration. This is the smallest memory capacity test and it is running in dual-channel mode. 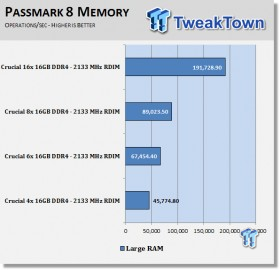 With the growing number of cores in Haswell-EP based systems, we find systems will need larger amounts of RAM to feed these memory hungry processors.

Initially we started out running the Crucial 8GB DDR4 memory sticks and soon found ourselves running out of RAM in our tests. With larger number of VM's running on these new systems and greater core counts, applications will naturally use more memory. 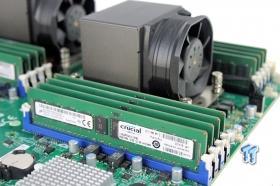 We also found that there is no real difference in performance with Crucial 8GB DDR4 sticks that we used before so it's a no brainer to move to the 16GB sticks if you need the extra capacity.

We are testing a large number of Haswell-EP based systems in the lab these days and find that just about all systems perform very close in memory performance. This is a good thing, as you now do not need to shop around for DDR4 RAM for different motherboards to get the highest performance. Crucial DDR4 server memory has the performance to match different server platforms, and it performs well in different combinations of densities.

PRICING: You can find Crucial 16GB Single DDR4 2133 MT/s (PC4-2133) CL15 DR x4 ECC Registered DIMM 288-Pin Server Memory CT16G4RFD4213 for sale below. The prices listed are valid at the time of writing but can change at any time. Click the link to see the very latest pricing for the best deal.