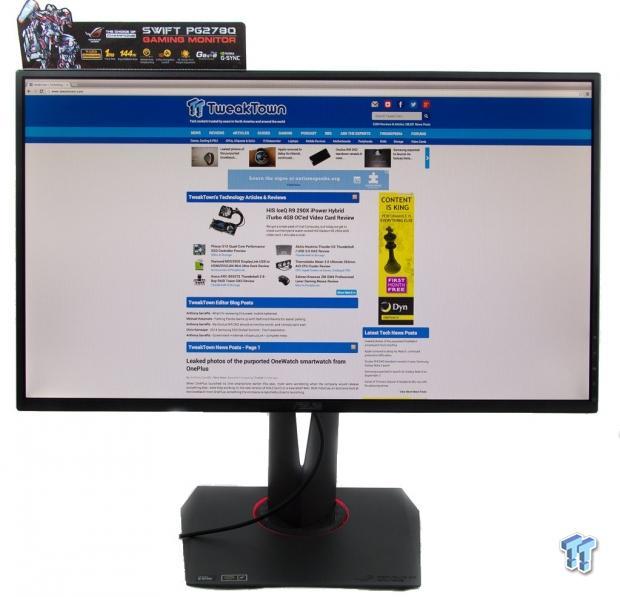 Today, we have a really special treat for you. ASUS hooked us up with the new Swift PG278Q monitor for a review, and we are practically speechless. In a word: gorgeous. But, I can't let too much go right now.

The PG278Q features NVIDIA G-Sync technology, which allows the monitor to sync its refresh rate to the frame rate of the GPU. It's said to create a better gaming experience, a claim we will be putting to the test in today's review.

Instead of covering all of the specifications, we're going to direct you at the chart below, taken from ASUS's product page. After the image, we're going to highlight some of the more important specs before moving on to the features, pricing, and gaming specific features. 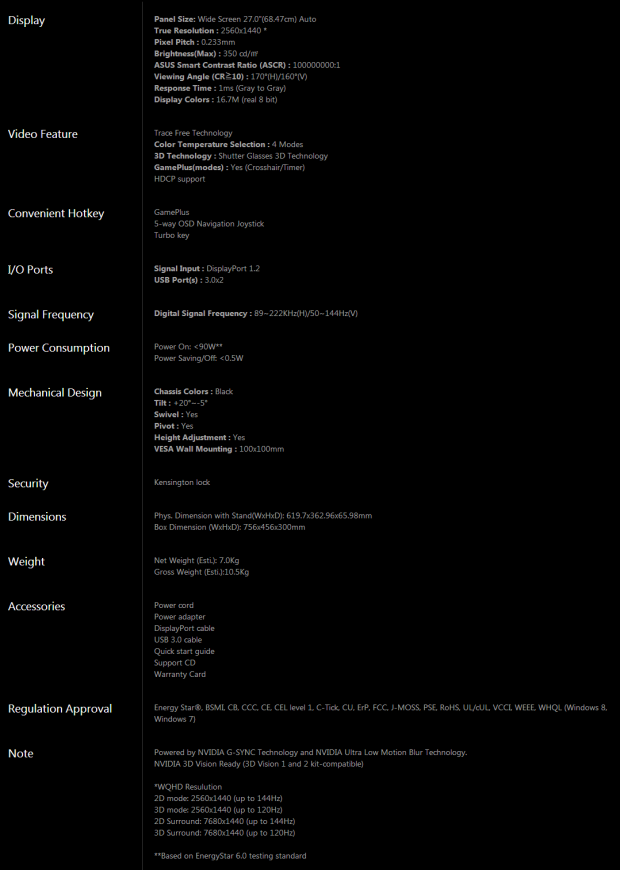 The ROG Swift PG278Q (PG278Q from here on out) is a 27-inch beast. It pumps out WQHD resolution-2560x1440 in common terms-and does so at a lightning 144Hz refresh rate. The extra refresh cycles above 120Hz do make this a screen to behold.

The panel is of the TN variety, meaning color reproduction and viewing angles will be affected. The PG278Q is spec'd at 350 cb/m^2 for brightness, 1ms gray-to-gray response time, 170/160 horizontal/vertical viewing angles, and less than 90 watts of power draw, which is unbelievably high.

Aside from some of the gaming features, noted below, the monitor is actually somewhat barebones. You get an excellent stand that features swivel, tilt, pivot (for going into portrait mode), and height adjustment.

It comes with a glowing red loop around the bottom of the stand, and the chassis is clearly inspired by ASUS' ROG line of gaming notebooks. You'll see what I mean shortly.

As far as gaming features go, this is where ASUS has spent most of its time. This is one of the first G-Sync monitors on the market. For those who haven't been hammered by NVIDIA's marketing, G-Sync is a technology that syncs the monitor's refresh rate to the rate of the drawing frame rate of the GPU itself. This should eliminate tearing and the lag associated with V-Sync.

It does require a special chip in the monitor to sync up with the GPU, and you have to be running an NVIDIA GPU newer than the GTX 650 Ti Boost. A full GPU list is available on NVIDIA's site.

ASUS has also included its standard gaming features, allowing you to easily overlay a crosshair in the middle of the screen-for hardcore modes and games that don't have one when shooting from the hip-and a timer for timing in-game events. These are easily accessible through the GamePlus key on the monitor.

The other gaming features are the 1ms response time and 144Hz refresh rate mentioned above, which provide for a super-smooth gaming experience. Another gaming feature-in my opinion-is the super-slim bezels around the edge of the display. Width-wise, it's less than one USB, or about 1cm, making Surround and Eyefinity setups merge together that much easier, and better.

Oh, and it supports NVIDIA Vision 2, like most 144Hz monitors. I'm not very convinced that this is a good gaming feature. It's cool, but certainly didn't help playing Battlefield 3. And, it seems like it's a dying feature in games as the supported games list is rather short and doesn't really contain any modern titles such as Battlefield 4, COD: Ghosts, and so on.

For movies, I can see 3D Vision being nice, but do know that it is a pain to setup and I still had problems getting NVIDIA's demo apps to work. Battlefield 3, however, did play well, but quick turns were blurred by the 3D Vision setup. 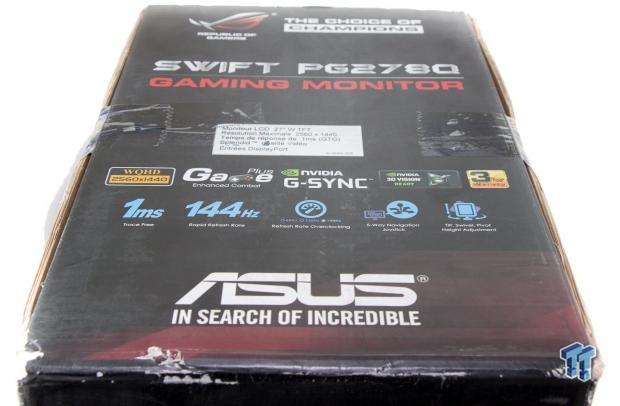 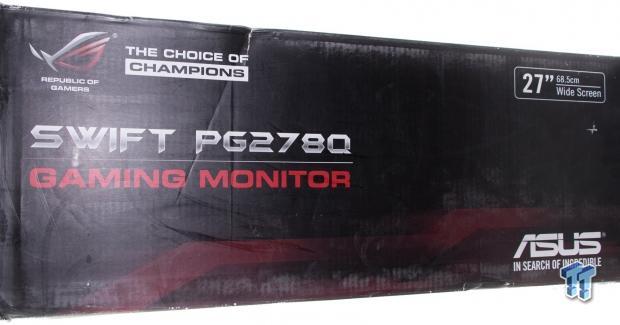 The Swift PG278Q comes in a black and red box, with the main selling points listed on a couple of the sides, while the other sides strictly featured the ROG branding, ASUS branding, and monitor name. 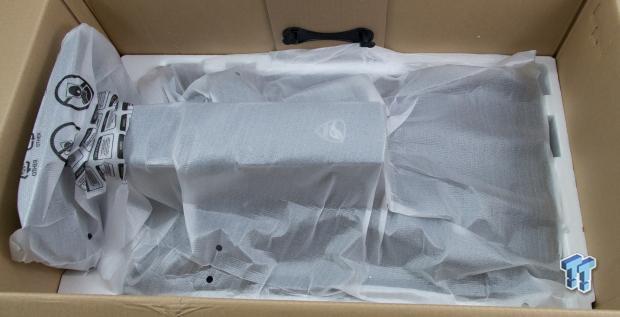 You can see above that the monitor is protected by foam and is wrapped in a protective foam bag. The monitor comes fully assembled, so it's practically ready to go right out of the box.

No dead pixels were found in the monitor.

As discussed above, no assembly is required for this monitor. 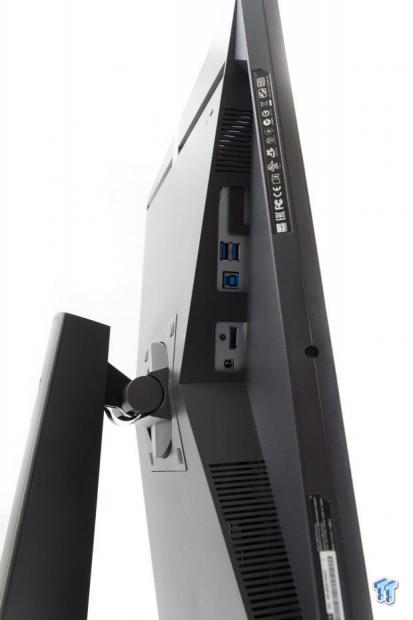 From bottom to top, we have the power in, DisplayPort, the USB-in for the hub, and the two USB ports that make up the hub. Above that, there is a port for service use only.

I just want to take a second to show off the styling that I previously mentioned. In the pictures below, you can see how the monitor's design is clearly influenced by the ROG line of gaming laptops by ASUS.

The monitor features the same angular design, which is quite stunning. It also features the glowing red ring around the base. 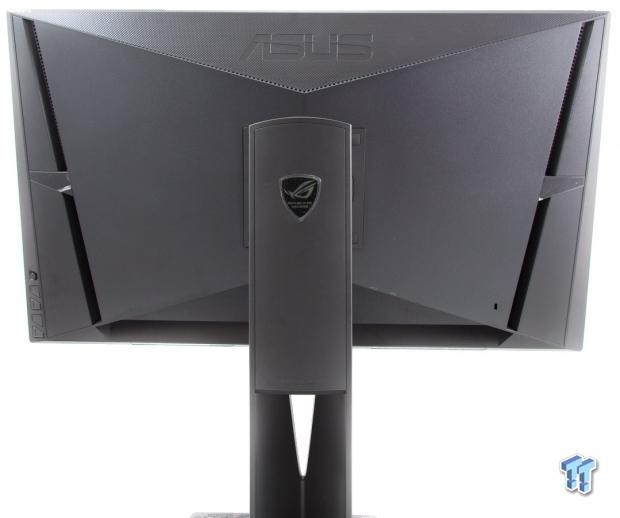 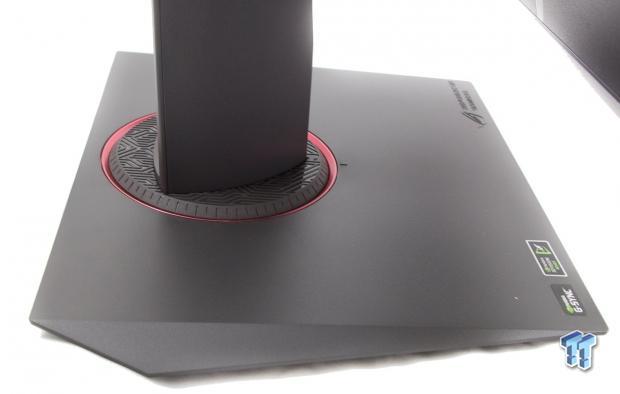 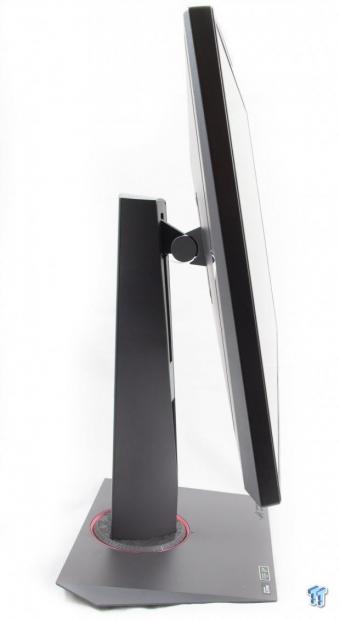 The OSD makes use of three physical buttons (not including the power button) and a five-way joystick. The joystick makes navigation of the OSD a breeze, and the physical buttons are only used to exit, access the on-screen Crosshair and Timer function, and change the refresh rate. 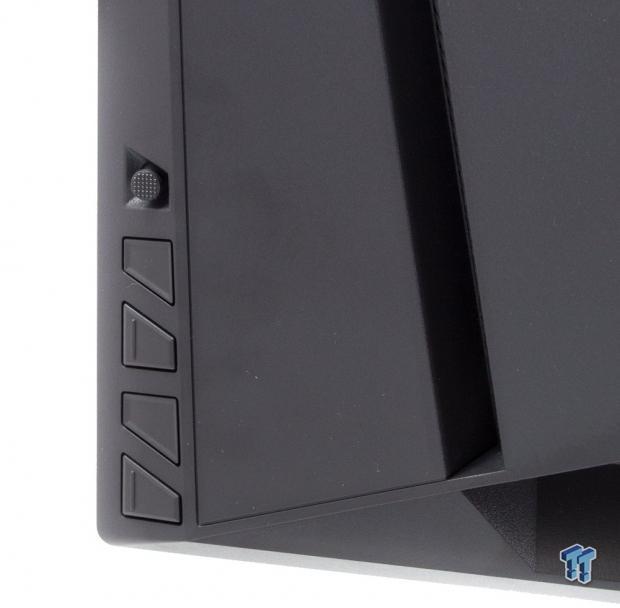 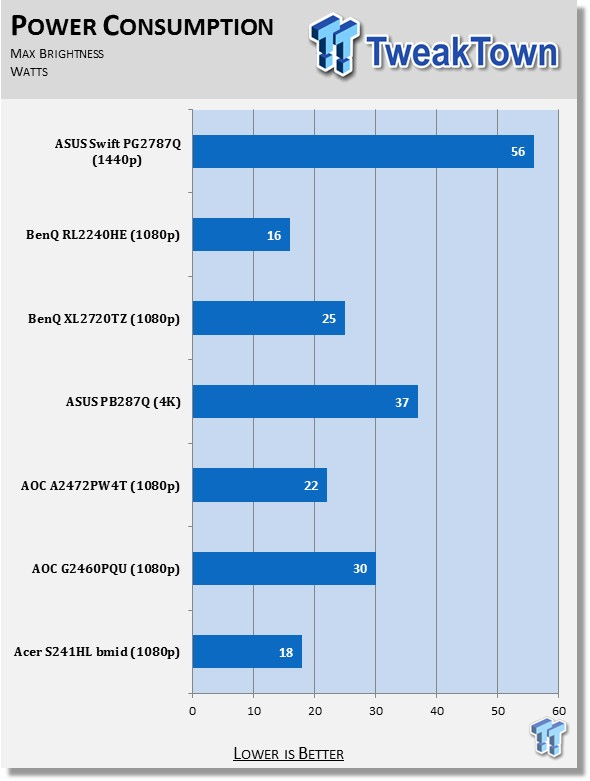 The ASUS Swift PG278Q consumes a massive amount of power sitting with the blank document open at full brightness and 144Hz refresh rate. We measured a consumption of 56 watts at the wall. 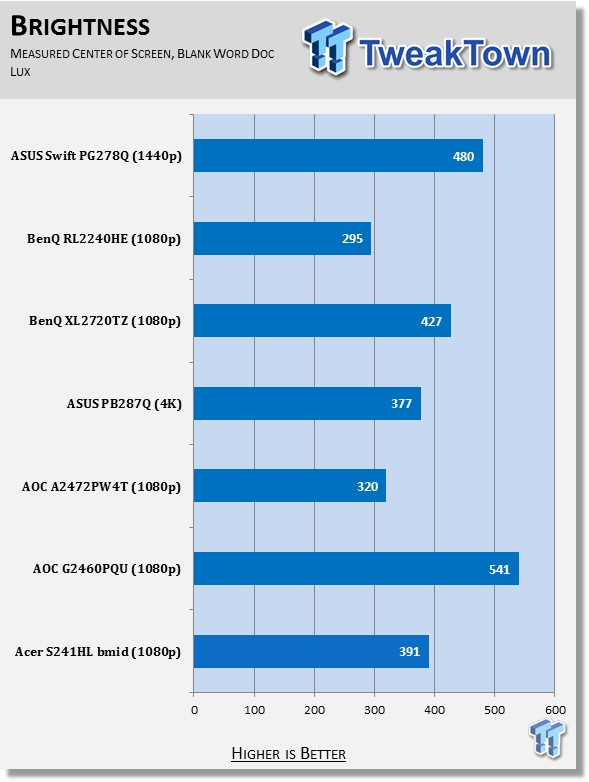 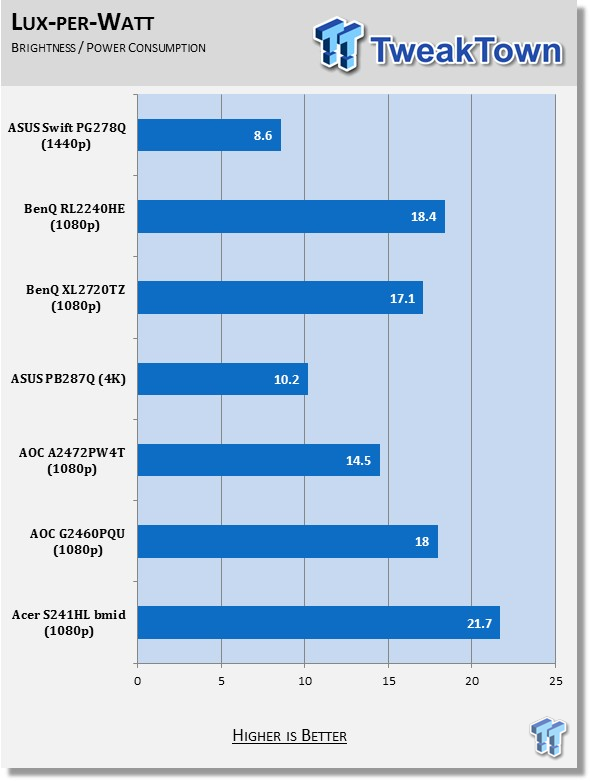 As I feared, the PG278Q bombs the efficiency conversion, producing just 8.6 lux-per-watt. It's the first monitor we've seen in the single digits, so we're going to have to assume G-Sync is energy hungry, since we have other 144Hz monitors on there that did quite a bit better.

I spent a bunch of time playing Battlefield 4 when this monitor first showed up, and I was stunned by how much I loved this monitor. The 144Hz refresh rate really kicks ass on this monitor.

I played around with G-Sync, and to my dismay, I didn't see much of a difference. At really high frame rates, it prevented tearing seemingly without introducing lag. At low frame rates (60 FPS or less), it probably made the game play a bit smoother, but almost insignificantly.

In the middle range (where I normally aim to play), there really didn't seem to be a difference between G-Sync on or off. I didn't have a need for the on-screen crosshairs, but I flipped them on and found that they could be useful for games without crosshairs (hardcore BF4, COD).

Since, as I discussed before, 3D Vision isn't supported by many games, I went ahead and fired up the older Battlefield 3 to see just what all the fuss is about. Much to my surprise, it worked quite flawlessly. I was surprised because I had difficulty in getting it set up, and NVIDIA's own demo apps were giving errors.

While cool, the graphics seemed to blur when making a quick turn, making it hard to see. I found I played worse with 3D on, but it could be useful for slower games. It's also available for 3D pictures and Blu-rays, so these uses are definitely nice. I'm not sold on the 3D gaming aspect, at least not for first-person shooters.

Overall, I am in love with the gaming performance of the PG278Q. It's buttery smooth at 1ms and 144Hz and provides one hell of a gaming experience. I'm about to go buy my own.

So, it's the end of this review, and I'll bet you want to hear my final thoughts. I can sum up the next several paragraphs in one sentence: This monitor kicks ass, takes no prisoners, and is one hell of a gaming monitor and would be great for an Eyefinity or Surround setup thanks to its slim bezels.

But continuing on, I was surprised that I didn't see much effect from G-Sync. As previously discussed, it was mostly notable at low frame rates and exceedingly high frame rates. The middle zone - 60-120 - didn't really see an improvement, at least not to my eye and personal play style.

I think the best thing I can say as a testament to the monitor is that I want to buy three. I want to build an Eyefinity or Surround setup based on these monitors due to their great gaming performance and slim bezels.

But if that's not enough, I'll go on. The monitor is stunning; beautiful; elegant; and sharp. Graphics on screen are crystal clear, and WQHD (2560x1440) is the perfect resolution for a 27-inch panel without adjusting scaling settings in Windows.

The screen is bright, and I find myself using it towards the lower-end of its brightness to save my eyes, but in a bright room, it's nice to be able to crank up the brightness and see everything on the display. If you buy this monitor, you won't be disappointed. It's hands-down the best display I've ever used, and I've moved through quite a few different monitors. The only downside is the price.

The display will be available online starting at 12:01am on August 26 for an MSRP of $799. Ouch. But, if you want the very best, then this is it. It'll cost you, but you can rest easy knowing that you have a top-of-the-line gaming monitor with all of the latest goodies included with it.

It's not a value option, but it's the monitor that I want sitting on my desk. For this reason, it gets the Editor's Choice award, as this monitor is now my go-to display for gaming. 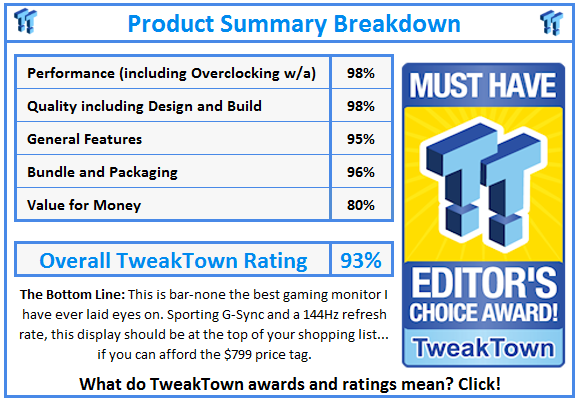