Comedy sequels rarely fare well, either not being as funny or simply rehashing the same jokes as its predecessor. Some franchises, such as The Hangover are even capable of both. Whilst 22 Jump Street is guilty of the latter to a degree, it manages to do does so in a fresh way, remaining relevant by its eagerness to poke fun at itself and the history of the television serial. 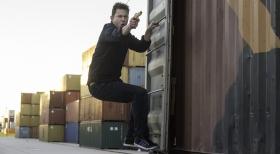 Fresh from their successes in taking down the high school drug dealers, Deputy Chief Hardy (Nick Offerman) puts the Jump Street program back into action, pairing detectives Morton Schmidt (Jonah Hill) and Greg Jenko (Channing Tatum) together again, under supervision of Captain Dickson (Ice Cube). Their new assignment calls for the buddy cops to pose as students once more, infiltrate a college and track down the dealer of a dangerous new drug dubbed "whyphy", which has already taken the life of one student.

When Jenko befriends fellow students Zook (Wyatt Russell) and Rooster (Jimmy Tatro), and becomes part of the football playing fraternity, a wedge is driven between Jenko and Schmidt's working relationship, causing Jenko to soul search and question his career choices. 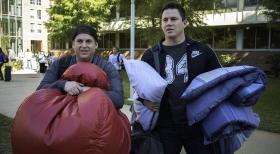 In the same vein as, say Arnold Schwarzenegger, in Kindergarten Cop, Hollywood heartthrob Channing Tatum is probably not a natural comedian, but with a whip smart script and a well-cast foil in Jonah Hill, the duo make for an unlikely, but surprisingly solid comedy pairing.

Directors Chris Miller and Phil Lord who spearheaded the first entry, return to helm the sequel and do so with obviously increased confidence. Their flexibility in working in both the animated world, with The Lego Movie and Cloudy with a Chance of Meatballs, and live action in this and its predecessor, all of which enjoy a rating of over 80% on Rotten Tomatoes, implies that their career will continue forwards on an upward trajectory. 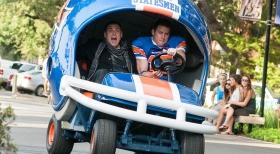 Where 22 Jump Street excels is in its whip-smart script, which takes stock of the failure of other comedies and importantly comedy sequels, turning what could have otherwise have been a negative into a positive. A case in point is the frequently recurring entreaty of "do it like exactly the same as last time" or Deputy Chief Hardy's feigned surprise at the success of the 21 Jump Street program and acknowledgment of the programs doubled budget - sly acknowledgment that Sony have allocated increased importance in the rejuvenated franchise. This is a film that doesn't pretend to be anything other than what it is, and wears it heart proudly on its sleeve.

Be sure to stay for the raucous end credit sequence, which offers a glimpse at the faux forthcoming 48 Jump Street sequels, complete with movie posters and stereotypical tag lines. Whilst the fact is that formula wont' last forever, I still wouldn't discount seeing 23 Jump Street in a few years' time. In fact, if it's anything like this, I certainly hope to. 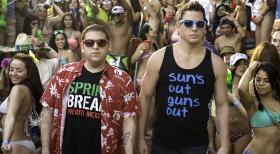 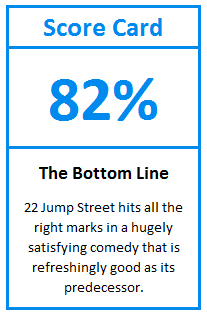