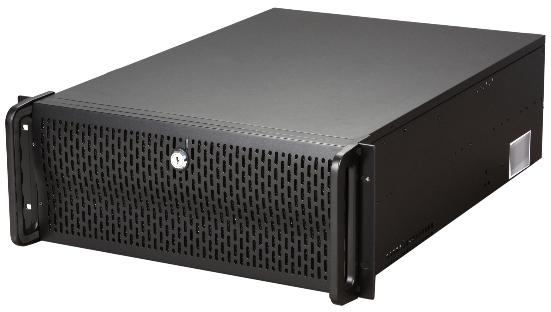 Just days ago, we looked at the $199 Rosewill RSV-L4411, one of four 4u rackmount cases offered by Rosewill. The RSV-L4411 is Rosewill's flagship model with 12 drive sleds, but the same base case design and construction is used throughout the entire RSV Series.

The entry-level rackmount cases from Rosewill are the two RSV-x4000 models, RSV-R4000, a short depth case, and RSV-L4000, the deep depth case that we are looking at today. The RSV-L4000 is nearly identical to the L4411 we just reviewed other than the three drive cages that Rosewill sells individually for $49.99 each.

The L4000 ships with drive sleds, but they are internal, non-hot swap type and three 5.25" bays for optical disks or an aftermarket drive cage. 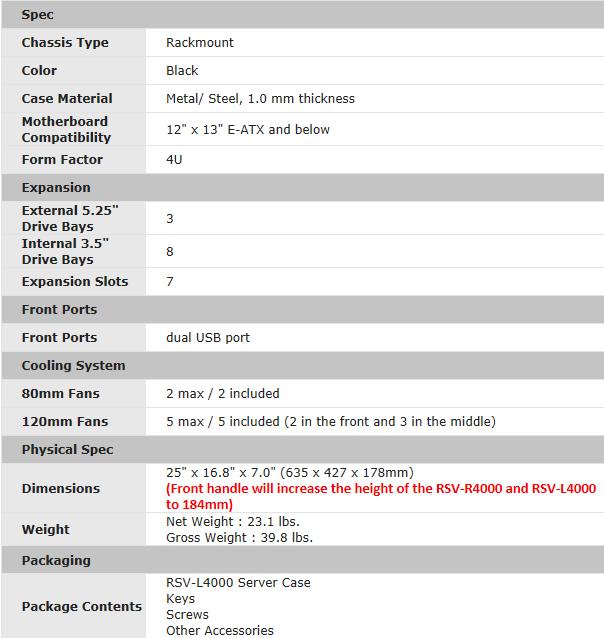 Designed for motherboards up to E-ATX standards, the RSV-L4000 provides plenty of room for large dual socket motherboards and the dual 120mm cooling fans provide adequate cooling for PCIe devices. The case has seven PCIe slots for RAID controllers and network adapters.

The inner drive cages provide enough room for eight 3.5" drives and the three 5.25" drive bays allow for additional components. Two USB 2.0 ports flank the front side of the case next to the power and reset ports. The RSV-L4000 doesn't ship with a robust accessory package, but Rosewill fills each fan opening from the factory.

At $89.99, the RSV-L4000 is a very low cost unit with a build quality that exceeds expectations. We've seen several rackmount cases and never ran across a 1mm thick steel case for this price. 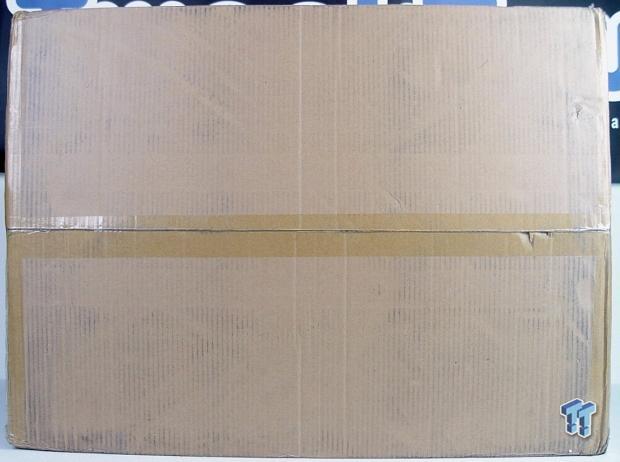 The Rosewill RSV-L4000 ships double boxed, and as you can see, it's quite a large package. 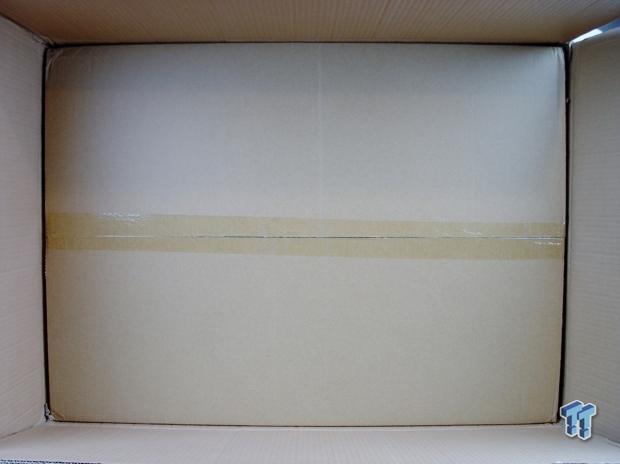 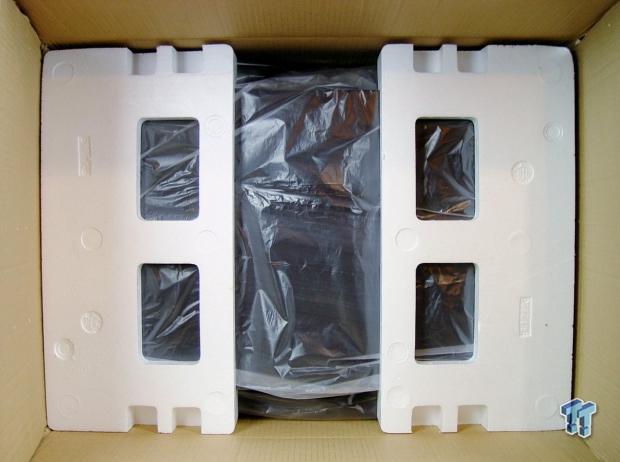 Inside we found a well-packaged case with foam on all four corners and enough foam to protect the unit should a fall occur on a corner. 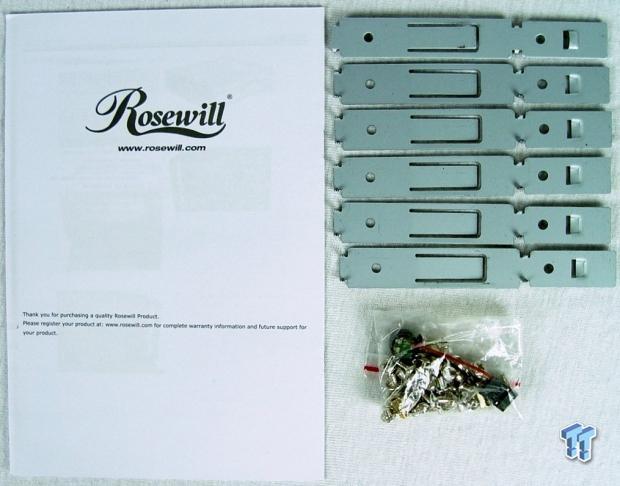 The accessory package includes the paper user manual, screws for installing a motherboard, two keys for the front door lock and six slides for installing 5.25" components.

The front locking cover is the same on all of Rosewill's 4u rackmount cases. The front door provides security for the system so the system can't be shut down or rebooted. 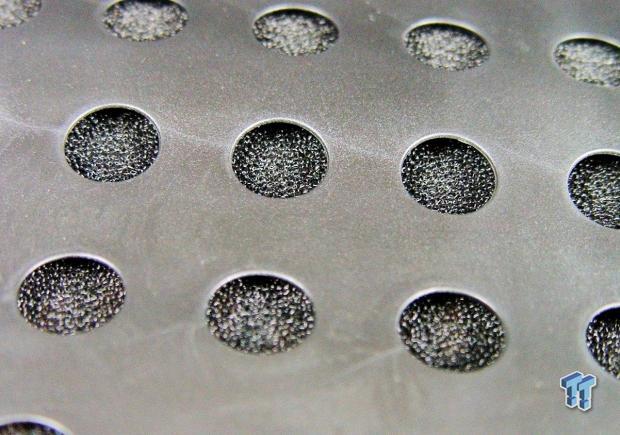 The front door has an air filter across the entire surface that is removable for cleaning. The filter is dense enough to keep the dust out, but porous enough to let air flow through nearly unrestricted.

Here we get our first look with the door open. The RSV-L4000 has two 120mm fans in the front and an additional three 120mm fans in the middle of the case to keep the inner components cool. Behind each front fan are four 3.5" drive sleds. You need to remove the whole fan assembly to access the drives.

The Rosewill 4u chassis ship predrilled for rails, but they are NOT included in the package. Newegg lists a Rosewill 3-section rail kit that is adjustable for length and uses ball bearings for the slides. The kit is $39.99.

The back of the chassis looks like any other steel ATX case on the market. Two 80mm fans exhaust air from the system. 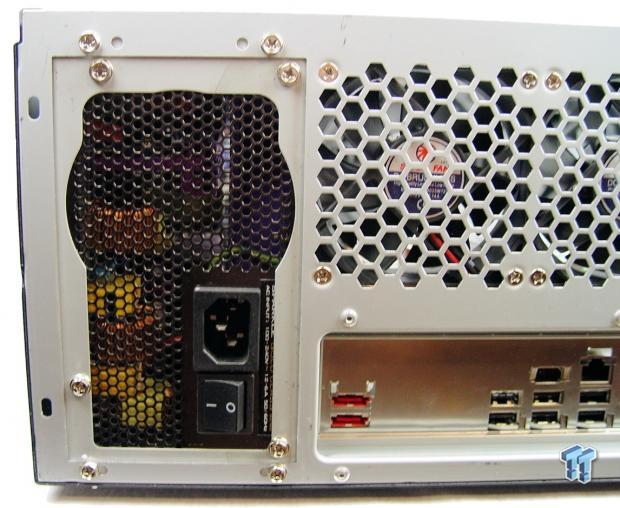 The PSU mount can rotate sides so the power supply can face either direction. Some PSUs have a large fan on one side, but the fan isn't always on the same side. 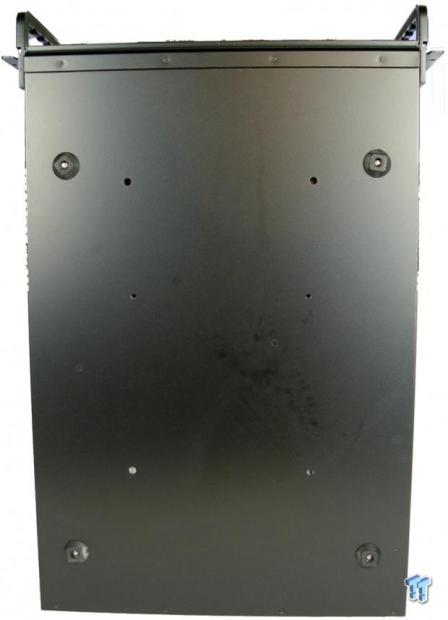 From the factory, the case ships with rubber feet on the bottom of the case. You'll take these off prior to putting the case in a rack, but the feet keep the case from scratching your desk during the system build. 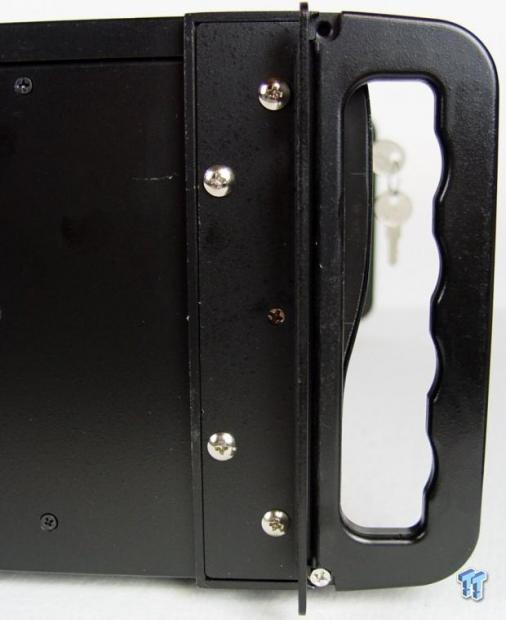 The handles are a longer than what we find on Supermicro and other rackmount cases. We found a couple reports where the handles were an issue with doors on racks. Most racks are adjustable, so you can maneuver the rails back if needed, but most people wouldn't want to do that on a rack that is already populated with systems. 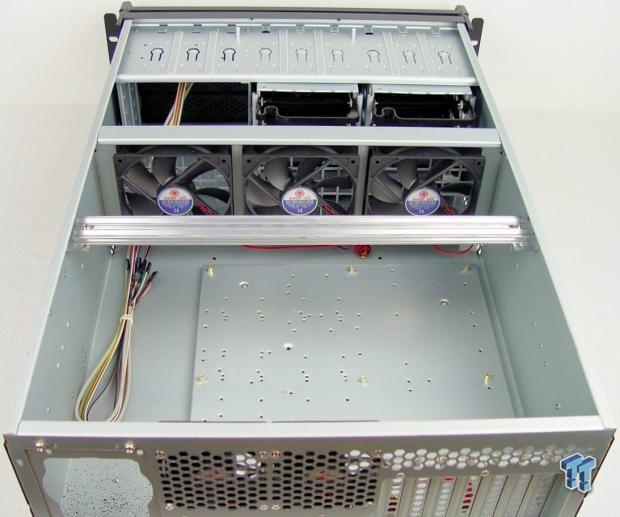 The Rosewill RSV-L4000 gives a lot of room inside the case for big motherboards and long power supplies. A removable aluminum bar across the top of the case increases the strength of the case structure, but we found the 1mm steel construction more than adequate.

The case is so strong that it didn't flex at all without the top cover installed and without the cross bar installed. Most cases in this price range use thin metal of questionable build quality. A case that flexes increases the chances of the system shorting the motherboard or other components. 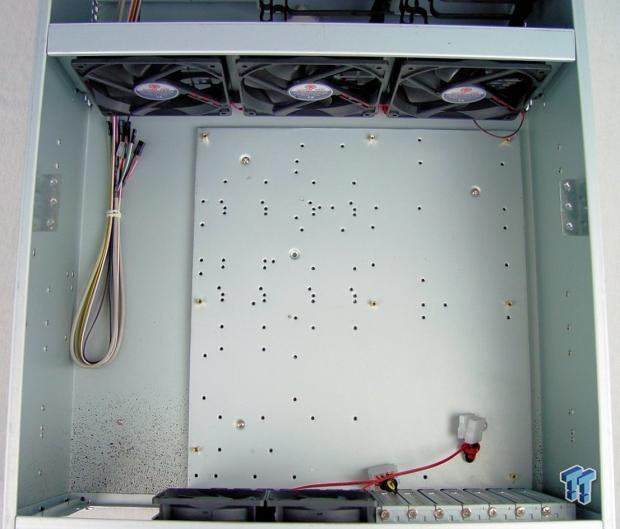 Here we see the internal motherboard tray. Unlike the RSV-L4411 model we reviewed a few days ago, the RSV-L4000 puts the motherboard closer to the fans. In most instances, this will not be an issue, but some server boards may position the SATA ports off to the side, so the far right fan may need to come out. 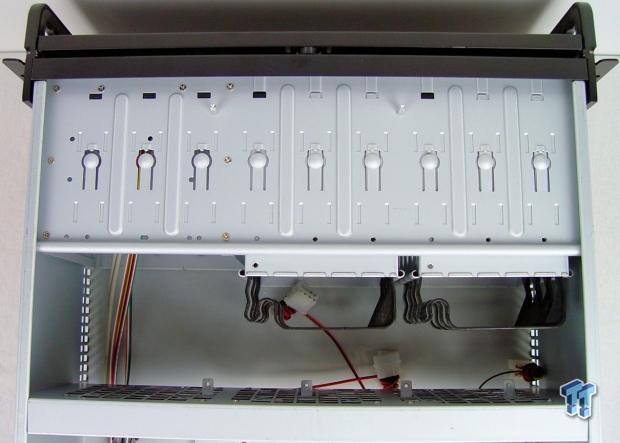 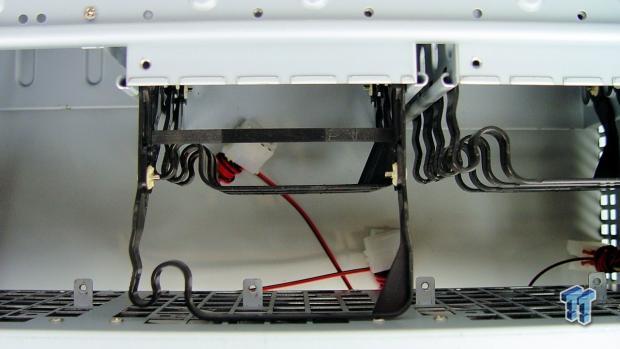 We were disappointed to find that the drive sleds can't come out without removing the whole assembly. This can be an issue if you want to simply hot swap drives, but let's put a foot back in reality. The RSV-L4000 costs around $100 shipped to your door. 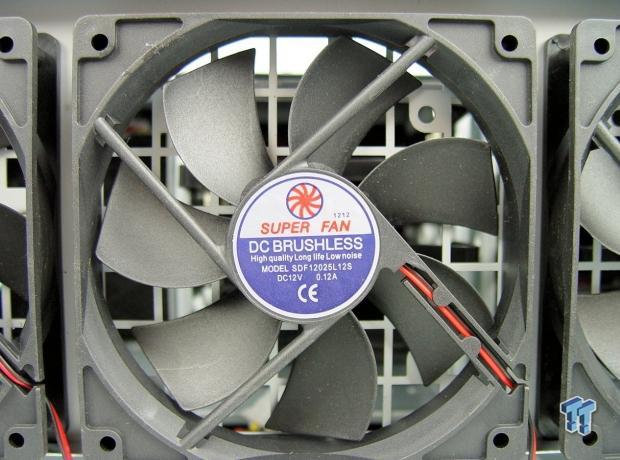 The fans are quiet with the system on, a big plus for the DIY crowd with limited space in an office or home office. 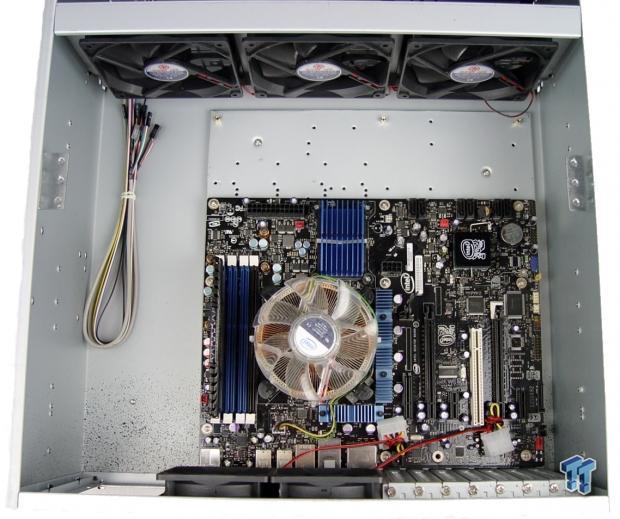 We installed an ATX motherboard in the case to use for evaluating TPCe, a stressful benchmark that produces a lot of heat. We managed to overclock the processor and DRAM, even with the Intel stock LGA1366 cooler.

We like everything about this case other than the inner HDD trays that you need to remove from the front of the case to gain access to. The HDD system can only be called consumer-ish. It's not what you would expect from a rackmount system, but then again, this is a $89.99 rackmount case. Looking at other cases in this price range, we found none with easily accessible HDD bays and the others are not built to the same standards.

The RSV-L4000 is one of the nicest entry-level rackmount cases we've ever ran across. That said, I've owned cases that cost twice as much as the L4000 and were not as sturdy. Getting past the wonky drive bays, the rest of the case is very nice and best of all, it's quiet while keeping the components cool.

Sadly, Rosewill also doesn't include drive rails with any of the rackmount cases in the portfolio. Newegg lists the add-on kit for $39.99. If you install the case in a dense environment, you'll need the rail kit, which adds to the final cost.

Overall, the low price even after buying the rails trumps the drive bay shortcomings. If you want drive sleds right from the factory, then we recommend purchasing the RSV-L4411. If you want to add your own, several companies make tray-less cages that are great add-ons. 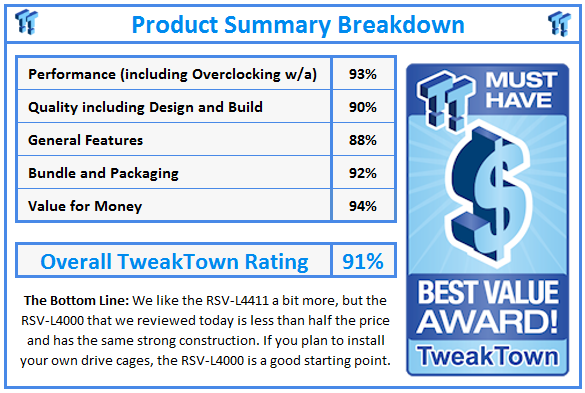