Back in May of this year, we had the opportunity to review the TS231U from Teratrend. We came away from that review quite pleased with what we found, so we went back to Teratrend and now have the quad-bay TS432U in house for review.

The TowerStor or TS432U is a quad bay external enclosure featuring USB 3.0 and eSATA connectivity. Built with the SilverStone brand behind it, the TowerStor TS432U is a professional storage option for those wanting the best of the best in terms of performance and aesthetics. Features of this unit include tool less drive installation, front control panel with LCD and a built in drive duplicator to name a few.

Compatibility of the TS432U follows the industry standard Windows XP, Vista, 7 scheme along with Mac OS X and Linux Kernel 2.6.3+. 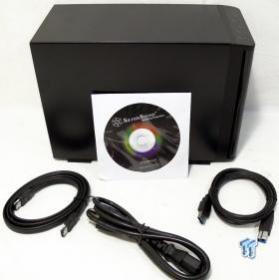 Included with the TS432U, we found a full complement of cables for connecting the enclosure. Additionally, we found software included on disk. 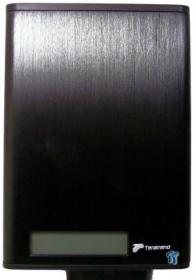 Looking over the front of the enclosure we found the TS432U to be quite elegant with its brushed aluminium door.

The bottom of the front panel houses the LCD panel illuminated with a blue backlight and to the right are four buttons for navigating the menu system. 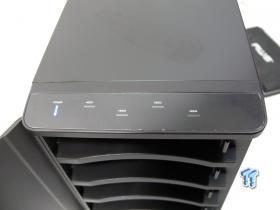 The top of the enclosure houses five LEDs, also in blue to denote drive activity as well as power. 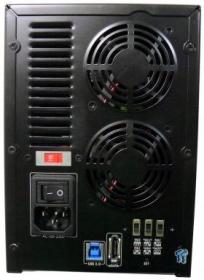 Moving over to the back of the enclosure, Teratrend has mounted dual 60mm cooling fans, allowing the unit to move a good amount of air, while staying silent. To the left, we have the built in power supply and just to the right, the I/O ports. 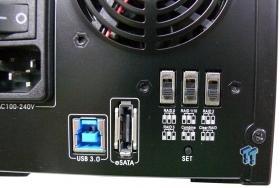 A closer look at the back I/O, we find the USB 3.0 port and eSATA ports lined up next to the RAID switches. 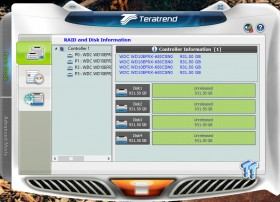 Looking over the software in basic mode you can see we have four 1TB WD Red HDD's installed in the enclosure. 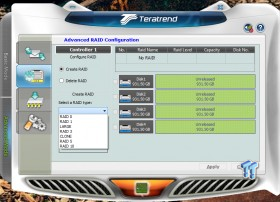 Moving over to advanced mode, the software allows us to create and delete RAID arrays. Among the RAID types we have RAID 0, RAID 1, RAID 3, RAID 5 and RAID 10 as options. Additionally, Teratrend has added the clone or duplicator mode as well. 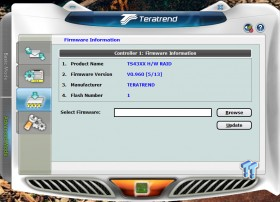 Here you can see the controller information. 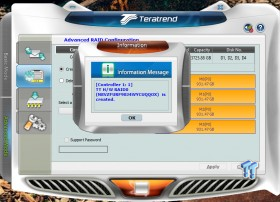 Creating our first array took very little time. It's worth noting that you can create or delete any type of array you want here in software without messing with the switches on the back of the unit.

The second is DiskBench, a real-world file benchmark that uses the drives file system to read and write data. In this test we copy a 10GB directory consisting of audio, video, documents and pictures to the enclosure. Each enclosure is connected via USB 3.0 to our native ports on the Z77 chipset. The drives used in testing are a pair of Western Digital Red 1TB hard drives. 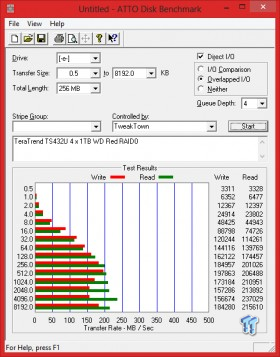 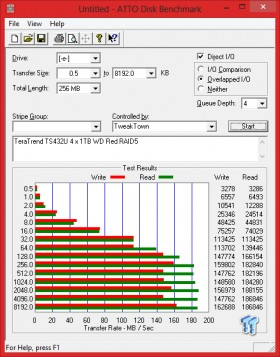 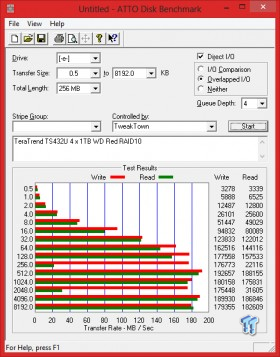 Setting up our drives in RAID 10 produced a more linear result with both read and writes coming in at 190 MB/s. 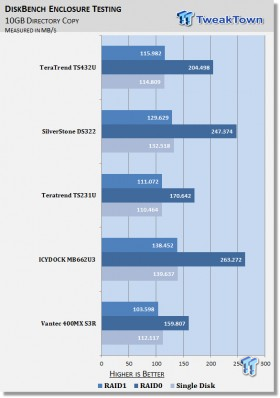 Above we have our DiskBench results. As you can see the TS432U did quite well. The only comparable results for this test is the Vantec enclosure found at the bottom of the chart. 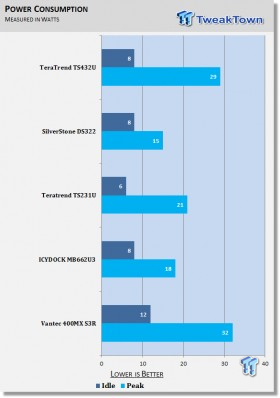 Another metric I wanted to throw into the equation was power consumption. I did this by using my Kill-A-Watt meter and plugging each enclosure into the device. Here we find the Teratrend TS432U using just 29 watts at its peak and a measly 8 watts at idle.

The Teratrend TS432U is a truly impressive storage solution for those wanting that professional appeal and performance. The SECC steel construction gives the unit plenty of durability, while the aluminium front panel offers a bit of aesthetic appeal. If you are a person that would rather navigate your way through software menus, Teratrend allows for easy setup of all included RAID modes from within the software. If you would rather use buttons and switches, the option is there as well.

Performance of the TS432 was solid. With RAID 0 producing the most performance at 200 MB/s and above, we also found RAID 5 and RAID 10 not lacking in any matter, touching 190 MB/s. Power consumption was another place the Teratrend did really well, especially when you consider comparable products like the Vantec 400MX used more power and aren't quite built as well as the Teratrend.

On to pricing, where we found the TS432U at a few retailers for $229.99, and this unit is back by a one year warranty. It's not cheap, but you get what you pay for. 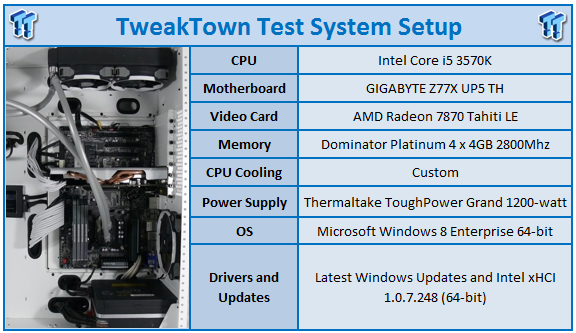