I can't quite accurately define when it happened - maybe it was the point when the Pirates of the Caribbean sequel Dead Man's Chest was released, or when he voiced the titular lizard in Rango, or perhaps even earlier, but somewhere along the line Johnny Depp ceased being a serious actor who imbued each and every role with a chameleon-like portrayal and instead became a caricature of himself, with a "property of Disney" logo stamped on his ass.

I guess that's what happens when the company hauls a dump truck of $50m on the door step to reprise the role of staggering pirate Jack Sparrow. You see, Johnny Depp is an immensely talented actor; he's done some amazing work in his career, but by constantly returning to his Jack Sparrow shtick, he's runs the danger of losing audience interest. With the box office figures pointing to disaster for The Lone Ranger, perhaps that time has now come. 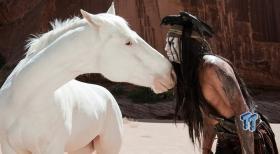 As the Transcontinental Railroad is being progressively constructed throughout the West, outlaw Butch Cavendish is being transported to face justice for his various crimes by order of Texas Ranger Dan Reid (James Badge Dale), whilst Tonto (Johnny Depp), a renegade Comanche, joins along for the journey. Dan's lawyer brother John (Armie Hammer) a fellow passenger is also returning to Texas after time abroad, but the train is soon hijacked by members of Canvendish's gang and derailed in spectacular fashion. Whilst Cavendish is recaptured and John is deputised for his heroism, the hunt for the Cavendish gang is complicated when the rangers are massacred and Tonto reveals that a powerful mole is operating the upper echelons of power in Texas. 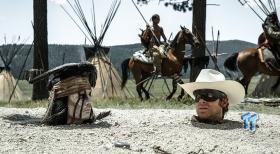 First making an appearance in a 1933 radio show, the Lone Ranger has gone on to become something of an America tradition, spawning comic books, TV shows and films. After laying dormant for some time, Disney obviously thought it was high time that the character be rejuvenated, but in many ways Disney have struck the same problems that struck their 2012 box office bomb John Carter; that is a complete disconnect between the target audience and the awareness of the intended demographic.

Of course, a great film could have been achieved despite that handicap, but whilst frequently entertaining, The Lone Ranger is far from a great film. For one, the script is painfully boring - there are literally no surprises throughout the films 150 lumbering minutes. And there is so much padding - whole subplots and characters, including the extended cameo of Helena Bonham Carter as a Wild West hooker are utterly redundant to the core narrative and superfluous. 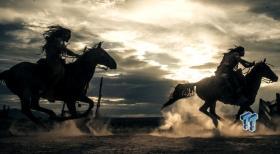 I'm also surprised by the somewhat awkward narrative structure which alternates between past and present (well both are in the past to be exact) and found the interruptions really affected the flow of the film, not least were also irrelevant.

Still, I don't want to give the impression that The Lone Ranger is a total train wreck - there is a lot of fun to be had and it thankfully doesn't take itself too seriously, but some more judicious editing process might reveal a better film hiding inside, even if it's a structure is built on an admittedly rocky platform. 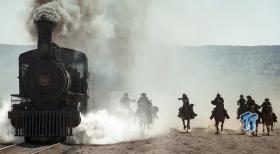 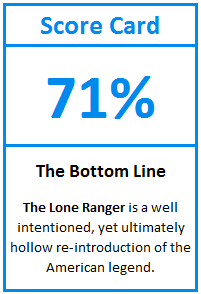