The 14th animated classic feature from Walt Disney, Peter Pan becomes one of the last to be released on Blu-ray, receiving special treatment for its prestige and on-going importance to the Disney brand.

Ordered to stop their playful acting out of the Peter Pan legend by their exasperated father, Wendy and her brothers John and Michael are visited one night by Peter Pan, the boy who never grew up, and through the assistance of his magical friend Tinkerbell, whisks the children to Neverland and straight into the war between the natives and Captain Hook.

Younger viewers who are more familiar with the spin-off Tinkerbell animated adventures may be taken aback at her personality change here, but the majority will continue to flock to one of the more naive and innocent of the Disney features, a flight of fancy perhaps, but an endearingly classic one nonetheless. 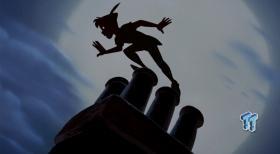 Peter Pan is presented in the aspect ratio of 1.33:1 encoded with AVC MPEG-4 compression.

Disney has a solid reputation for restoring their classic and whilst not all will be satisfied (especially the most strident of film purists), Peter Pan fares quite well with its latest round of visual nips and tucks.

The image is generally clear and sharp, although appearing a little soft at times. The applied level of digital noise reduction is far less egregious than on some live action films, but its new found smoothness does jar against how the film has traditionally looked. Color is particularly fantastic, although it appears to be slightly revised at times when viewed against previous home video transfers. I'd like to think that this transfer is the most accurate yet against the original animation, however I unfortunately don't have any on hand to give a definitive answer.

Overall, a pleasing transfer for one of Disney's beloved classics, and undoubtedly the best it has looked on home video yet. 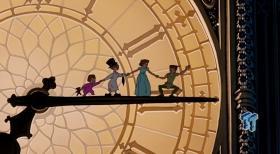 Presumably working off the same 5.1 mix created for the 2007 DVD, Peter Pan now features an additional two rear channels, which is no mean feat for a film originally mixed in mono. It doesn't automatically make Peter Pan an aural powerhouse, but it does create a gently involving mix, which I've no doubt remains true to the original intentions of the original sound designers.

Voices come through perfectly audible, although a little shrill at times. Unsurprisingly, much of the music is very thin sounding, with plenty of treble and a dash of bass, but noticeably strangled in the mid-range frequencies. Of course, this is not a complaint of the Blu-ray per se, but more of the limitations surrounding 1950's recording. Musical numbers feature reasonable bleed into the rears channels, although not as much as a 7.1 mix would suggest.

Overall, bar some kind of sonic overhaul which re-records much of the sound elements, Peter Pan is never going to sound better than it does here. 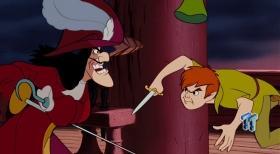 The UK branch of Disney Home Entertainment previously released Peter Pan on Blu-ray last year with the extras prepared for the 2007 DVD release, however Disney U.S. released an updated Blu-ray version this March with additional enhancements and to Disney Australia's credit - this is the version we get locally. Let's jump in.

The Audio Commentary hosted by Walt's nephew Roy Disney (now deceased) has been cobbled together from vintage interviews with Walt and others involved in the production. It's certainly an interesting feature and one that would be nice to have on other vintage Disney feature films.

The longest of the featurettes is only peripherally concerned with Peter Pan; Growing Up with Nine Old Men is a great tribute to the folks who helped establish the Disney name into an entertainment powerhouse. Whilst they have all since passed on, family members and friends provide warm recollections and anecdotes on long and prosperous careers.

The Introduction by Diane Disney-Miller is a nice tribute to Walt from his daughter, who briefly relays Walt's fascination with J.M. Barrie's story.

Carried over from the previous DVD release is the 15 minute long You Can Fly: The Making of Peter Pan, which utilizes a mix of new and vintage footage to give a brief run through of production. In Walt's Words: Why I Made Peter Pan featurette is a dramatized, abridged version of an original article penned by Walt himself,

Tinker Bell: A Fairy's Tale which looks at the development of the character through various incarnations. The Peter Pan that Almost Was discusses the original treatment of the production over its gestation, while The Peter Pan Story is an original 1953 featurette, which briefly looks at production, including some early story reels.

Finally, we have a total of five Deleted Songs and Scenes and two Music Videos, one sung by Disney voice artist Paige O'Hara (whom you might know as the voice of Belle in Beauty and the Beast and one by a band called T-Squad, whom I have never heard of before and am not expecting to again. 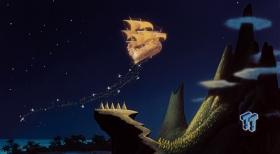