A surprise hit for the joint French / U.S. studio Illumination Entertainment in 2010, Despicable Me has become a lucrative franchise for the fledging studio, with very strong home video sales, this sequel and a planned 2014 spin-off movie Minions incoming. With Despicable Me 2, the filmmakers focus on the very best elements from its predecessor, that is; the comedic opportunities provided by the adorable Minions and the frequent use of slapstick comedy that the littlies love so much. 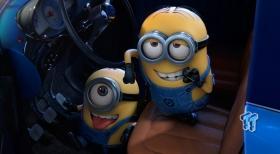 Having been drafted by the head of the Anti-Villain league (Steve Coogan) to investigate the threat of a new super-villain who has obtained a serum that transforms the recipient into a mindless mutant, Gru (Steve Carrell) must balance the demands of sole parenthood and his own loneliness, with the demands of a life of villainy that he has turned his back on. When Gru's minions are kidnapped and his assistant Dr. Nefarious (Russell Brand) abandons his employ, Gru will need to rely on his own cunning to solve the mystery of the phantom villain, whilst keeping the family unit together. 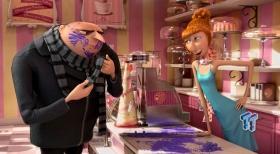 Despicable Me 2 does precious little to shake up the formula of the first film with the entire original cast including Steve Carrell, Russell Brand and Miranda Cosgrove all coaxed back into returning, while comedian Kristen Wiig joins the cast as Gru's off-sider and potential love interest.

The fan favourite Minions, whom now sport more individualized personalities, feature much more significantly than in the first and provide much opportunity for mirth. While it must be said that the script plays far more to a younger age than say, your average Pixar film, there is still just enough adult laughs to keep parents interested. I also dare say that the film will play very well with young girls, with a carefully placed young love story thread.

It's a little bit of a surprise that the animation is acceptable, but hardly impressive and certainly doesn't hold a candle to the likes of Pixar, or even DreamWorks. Of course, kids hardly care about technicalities such as bump mapping and texture resolution, but I can't help but feel how... cheap it all looks. The inclusion of 3D is a less than necessary inclusion, although some novel use is made of the tech during the credits coda.

Despicable Me 2 is certainly a fun and lightweight laugh and I dare say this will hold pride of place behind many a Christmas tree later in the year. 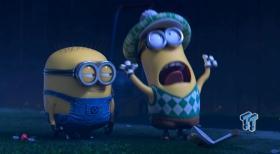 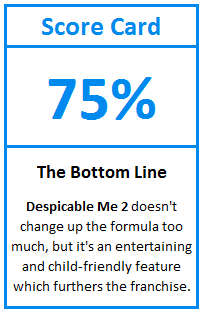