In the entire history of feature film adaptations of literary works, none have been so dismissive of their sources as World War Z. Bar the title and the genre, Marc Forster's film shares precious little in common with Max Brook's 2006 novel, an outcome even more curious following a hard fought rights battle, which cost Brad Pitt's production company Plan B Entertainment a cool $1 million.

While fans of the book might be slightly bemused, if not a little disappointed by the supposed adaptation, film fans will likely be less critical. As it turns out, World War Z proves to be one of the most entertaining and suspenseful films of the blockbuster season. Perfect it is most certainly not, but for a film borne out of significant behind the scenes turmoil, it ends up overwhelmingly more impressive than anyone could rightly expect. 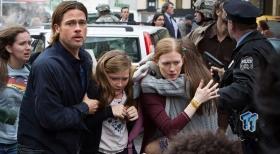 Whilst stuck in traffic gridlock on a Philadelphia street, Gerry Lane (Brad Pitt), a retired UN investigator and his family become embroiled in a deadly virus outbreak which spreads with terrifyingly rapid speed, causing the infected to become rage-fuelled zombies, intent on just one motive; infecting the uninfected. Following a suspenseful escape sequence that leaves a trail of devastation in its wake, the family are choppered out to the security of a vessel on the Hudson River, which has become a make shift command bunker by Lane's contact UN Deputy Secretary-General Thierry (Fana Mokoena).

Tasked with attending to the remaining survivors, Lane is coaxed into leading a team of Navy Seals to track down the virus's origin, which takes him to South Korea and then Israel, where the mission takes a turn for the worst, which leaves him with little assistance in fighting a battle which may have already become lost. 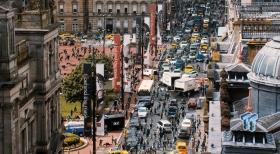 Much has been written about World War Z's troubled production and not insignificant budget blowouts, precipitated by a post-production rewrite which saw the entire final third act jettisoned. For those in the know, it's easy to pin point the moment the film charts its new course (hint: everything after Israel), but this has seemingly had little adverse effect on the final cut. While the original ending, with Pitt cutting a swathe through forward barreling zombies in Russia, to rescue his family would have been far bleaker (and I'd suggest less box-office friendly), the replacement works well and certainly escalates the suspense stakes, by going in the opposite direction than where viewers would expect. 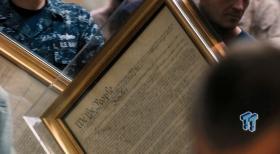 For a genre that normally confines its storytelling to reign in limited budgets, World War Z is arguably the first time a zombie feature has attempted such epic scope and the results are impressive. Like Contagion (just with more action), the threat of an adversary that can't be stopped, steeped in the realm of scientific possibility is an imposing threat indeed. Whilst the special effects are, at times, a little unimpressive and the inclusion of charmless and ragged Brad Pitt as the hero is questionable, as a package, World War Z is highly entertaining, frequently of the edge-of-the-seat variety. 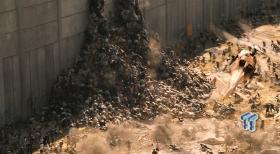 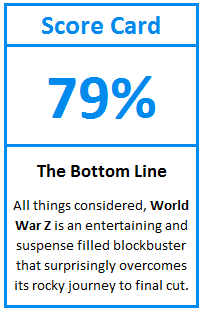