The G Technology G-RAID Mini is a portable storage solution designed for users of Mac OS, that want all of the elegance, and professional storage appeal along with a bit of performance. Backed by HGST, G-Technology has for quite some time, been creating top tier storage solutions for creative professionals. The G RAID Mini carries on this tradition with its pure aluminium construction.

The G RAID Mini we have in the lab today continues on where the G Drive left off. Offering 2TB of storage capacity with the ability to configure it in RAID 0, for maximum performance or RAID 1, for an added bit of security. The G RAID Mini arrives from the factory ready for your Macintosh computer, formatted with the Journaled file system. However, a simple reformat allows you to access the G RAID from your Windows PC. Warranty included with the G RAID stands at three years. 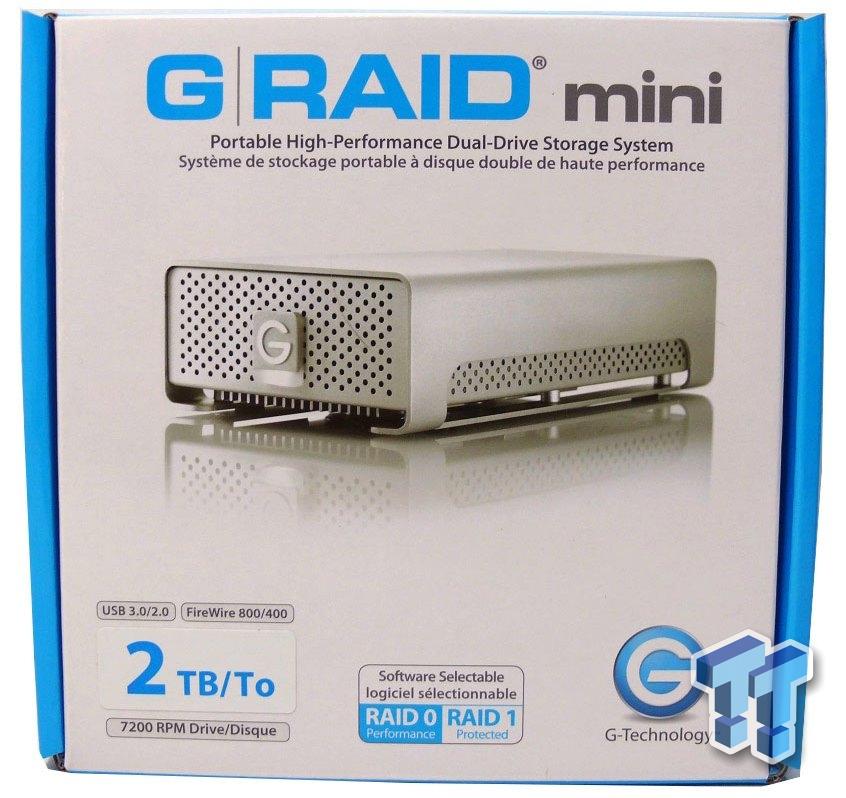 Our sample of the G RAID Mini was delivered in its retail packaging. The front showing an image of the portable drive, followed closely by the storage capacity of 2TB listed at the bottom. 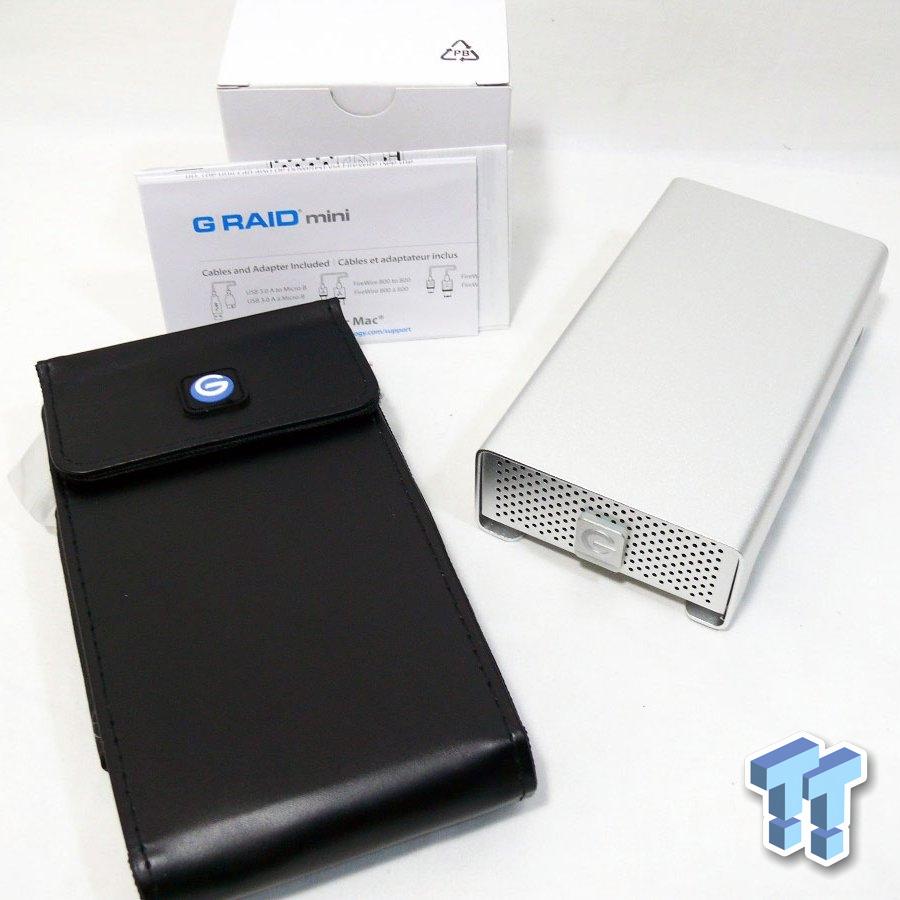 The scope of delivery for the G RAID includes the enclosure with drives, carrying case, and the box of cables and manuals.

The front of the enclosure houses the G-Technology logo, underneath you will find a white LED.

The back of the enclosure houses dual FireWire 800 ports, sitting next to a USB 3.0 receptacle. 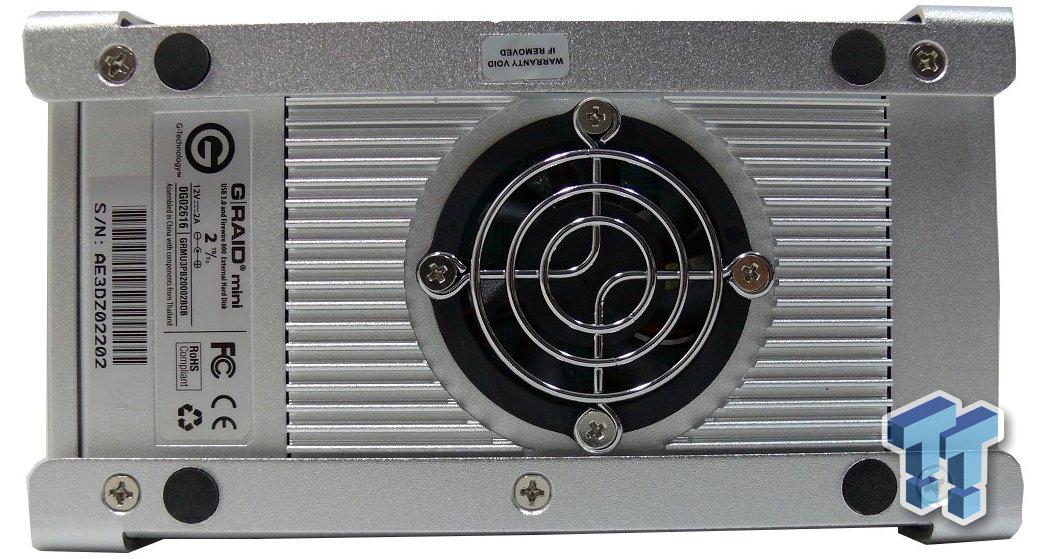 The bottom of the G RAID houses a silent 40mm cooling fan. 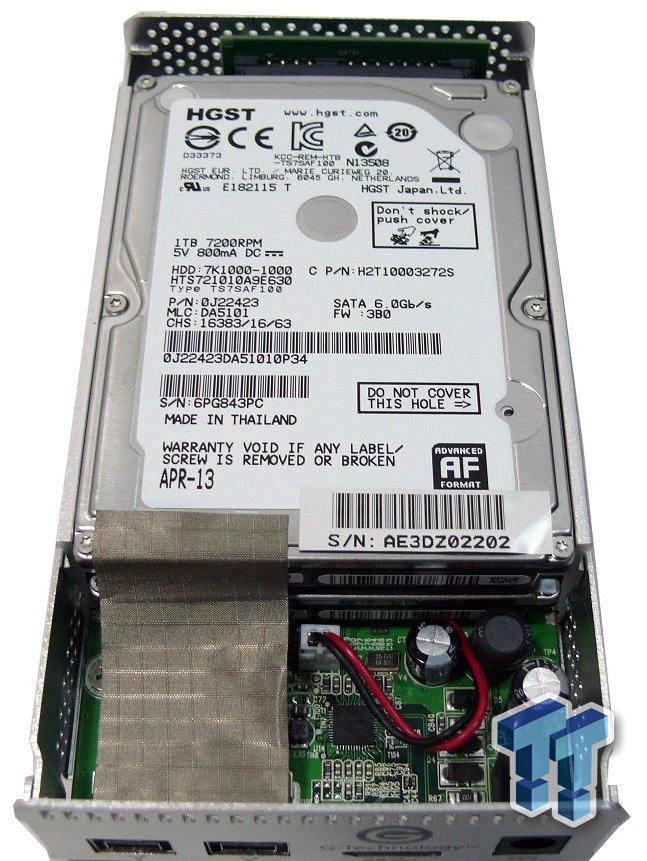 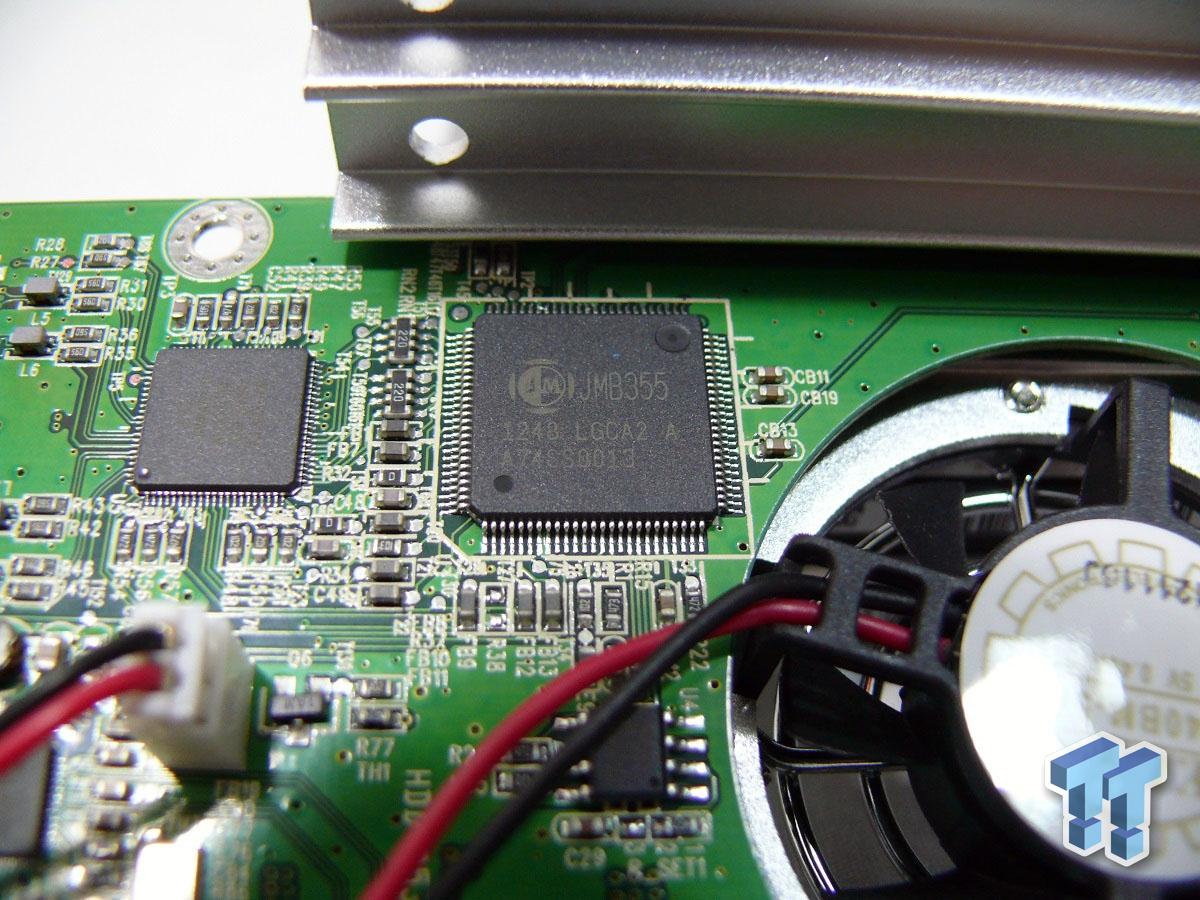 Once fully disassembled, we were able to look over some of the components used. The first of which is the JMB355, used as the FireWire to SATA bridge. 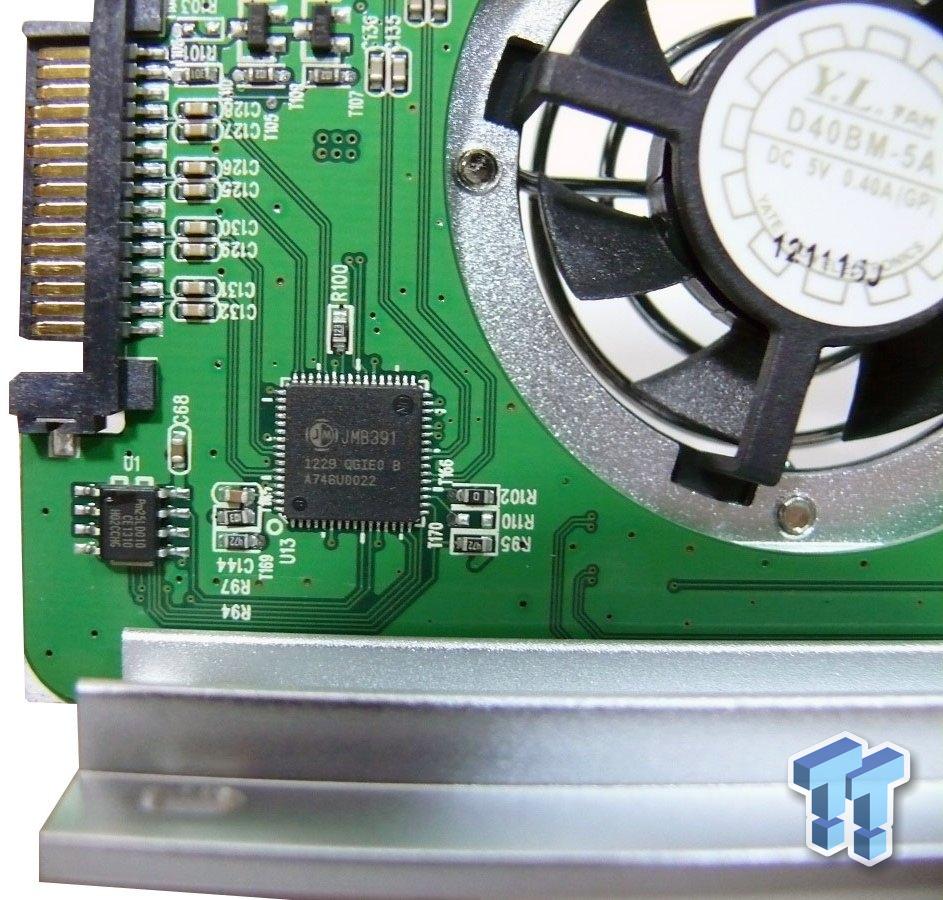 To test external storage platforms, I utilize three of the most well-known and respected benchmark applications. ATTO Disk Benchmark is the first and is recognized as the industry standard for marketing specifications. The second, CDM or Crystal Disk Mark offers sequential read and write metrics, 512K random read and writes and 4K data with Queue Depths up to 32.

Through DiskBench we offer real-world testing as it offers a custom data set that can be controlled by the user. For our testing I use a 10GB directory of mixed data that includes, pictures in both the RAW and JPEG file formats, AVCHD video and documents in both the XLS and DOC formats. 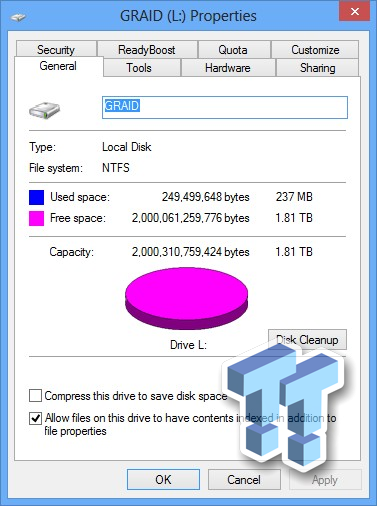 The G RAID was packaged and factory formatted with the Mac OS Journaled file system. After a quick formatting to the NTFS file system, we are left with 1.81TB of usable space. 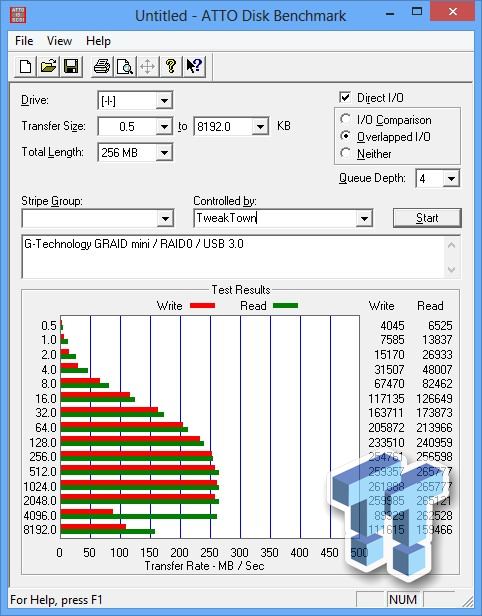 RAID 0 testing started with us running the G RAID through ATTO. Here the enclosure peaked at 265MB/s read, followed by 261MB/s write. 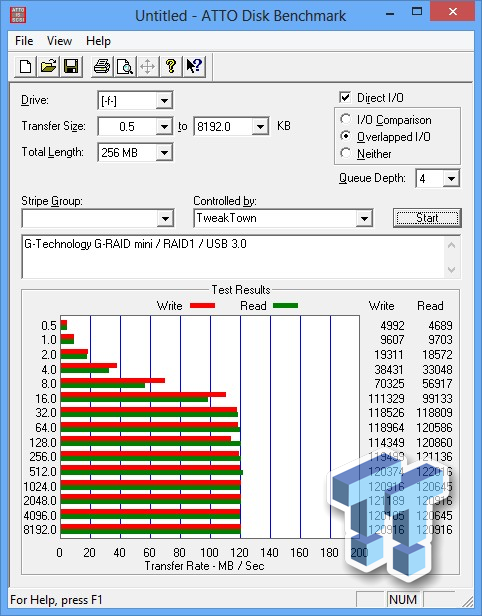 RAID 1 testing presented us with a peak of 120MB/s read and write. 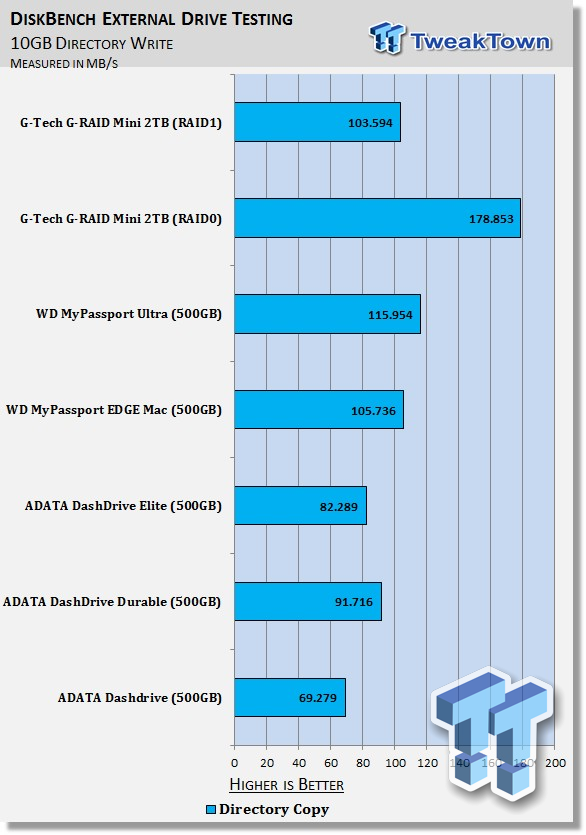 Adding our results for both RAID 0 and RAID 1 to our charts, it does not come as much of a surprise that the G RAID in its RAID 0 configuration would pull out in front. In RAID 1, the drive was comparable to the WD Passport EDGE for Mac, coming in at 103MB/s.

The G-Technology G RAID Mini in its 2TB configuration is a great solution for creative professionals looking for a sleek storage solution that fits right in with their iMac or MacBook. Even PC users would find this as an attractive solution as the build quality is truly excellent.

Performance of the G RAID in all of our testing was notable. Even with the overhead of RAID 1, the G RAID was capable of 120MB/s in sequential testing. Out of the box, the G RAID is configured as a RAID 0 storage solution, as this is where all the performance lies. In RAID 0, we saw the G RAID touch 265MB/s in ATTO, and real-world testing netted us 178MB/s. 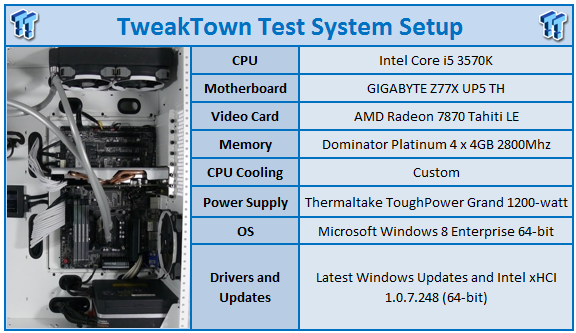