When I first heard about the Oblivion project, for whatever reason, I assumed it was based on the Elder Scrolls franchise (could I be the only one?), but once the first trailers surfaced - it was clear that it was something else completely. Based on director Joseph Kosinski's unpublished graphic novel of the same name, Oblivion was picked up by Universal, following an aborted attempt to produce the film for Disney, as a follow up to his debut picture Tron: Legacy. 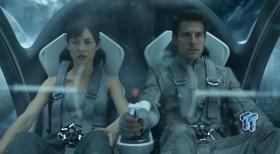 In 60 years, Earth will be uninhabitable and desolate, with the survivors of the war that destroyed it having fled to Titan, one of Saturn's moons. Two researchers have been left to gather resources, Jack Harper (Tom Cruise) and Victoria Olsen (Andrea Riseborough) who maintain the systems that suck large amounts of water to be used in Hydrogen batteries, a project in its final stage. Unbeknownst to Victoria, Jack is haunted by flashbacks to a time before the war (which pre-dates his existence) and embarks on side quests to recover relics and vegetation from pre-war times. The surface is littered with 'Scavs'; humanoid creatures who roam the plains and seem intent to spoil the project.

Whilst on a routine repair mission, a long outdated NASA craft crash-lands with human survivors - including a pilot, Julia Rusakova (Olga Kurylenko); a familiar face who haunts Jack's dreams. Soon, it will be apparent that there is far more behind the war than was ever revealed.

Director Joseph Kosinski has a keen eye for world building, no doubt aided by his background in architecture. Oblivion, like Tron: Legacy before it, is a visually stunning environment, filled with future tech and the same blinding white plastic utilized by the likes of Apple.

As with the accusations of 'style over substance' leveled at the Tron sequel, one could easily make the same claims of Oblivion, however despite some faults, that isn't one of them.

Oblivion's true faults lie in a disjointed script which flirts with mystery and simplicity in its first half, clearly delineating the rules of the films universe, before turning them upside down.

The cast, led by the always affable Tom Cruise, are universally solid. Former Quantum of Solace Bond girl Olga Kurylenko is a stunner and a strong actor to boot, imbuing her role with the appropriate level of empathy and passion. Less utilized is Morgan Freeman who looks somewhat staid in the role of the aging dues ex machine.

Similar to Daft Punk providing the amazing score for Tron: Legacy, French electronic outfit M83 provide the musical accompaniment, albeit less memorably than the former. Still, it's an interesting score and one that can stand alone successfully in its own right.

Overall, I mostly enjoyed Oblivion; it's certainly a different film than I anticipated and the third act is less joyous than it is frustrating, whose payoff is less satisfying than it is final. Kosinski is at his most successful when he follows his strengths, rather than attempting to channel J.J. Abrams. 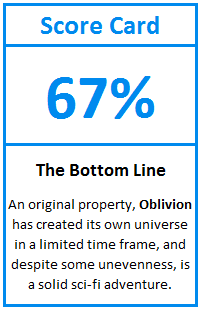