Since departing the office of Governor of Los Angeles in 2011, Arnold Schwarzenegger has apparently been keen to get back in front of the camera, especially since his personal fortune stands to be massacred by divorce. Following a cameo, and extended cameo in the first and second Expendables films, Schwarzenegger finally makes his return to cinema screens in his first leading role in a decade star making role in The Last Stand. 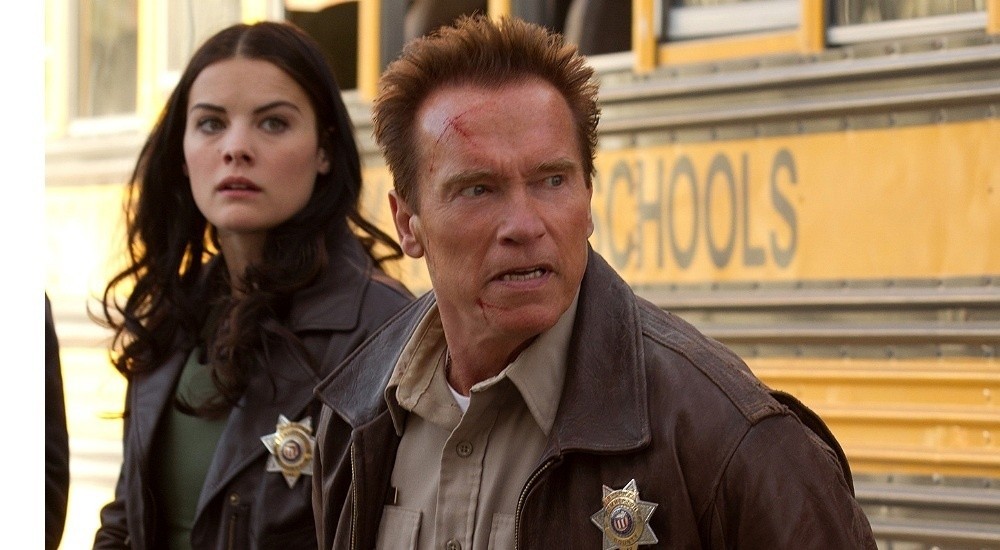 In the opening moments of the film the straightforward setup is unveiled with dangerous efficiency; it seems the surprise escape of a convicted drug lord, Gabriel Cortez (Eduardo Noriega) from FBI custody in Las Vegas via a Chevrolet Corvette (at speeds over 300km/s per hour); who intends to drive to the safety that lies just beyond the Mexican border. But despite a dirty cop on the inside and a mercenary team of advancers clearing the path ahead, Cortez doesn't count on hard ass Summerton Junction Sheriff Ray Owens (Arnold Schwarzenegger) laying down the law. 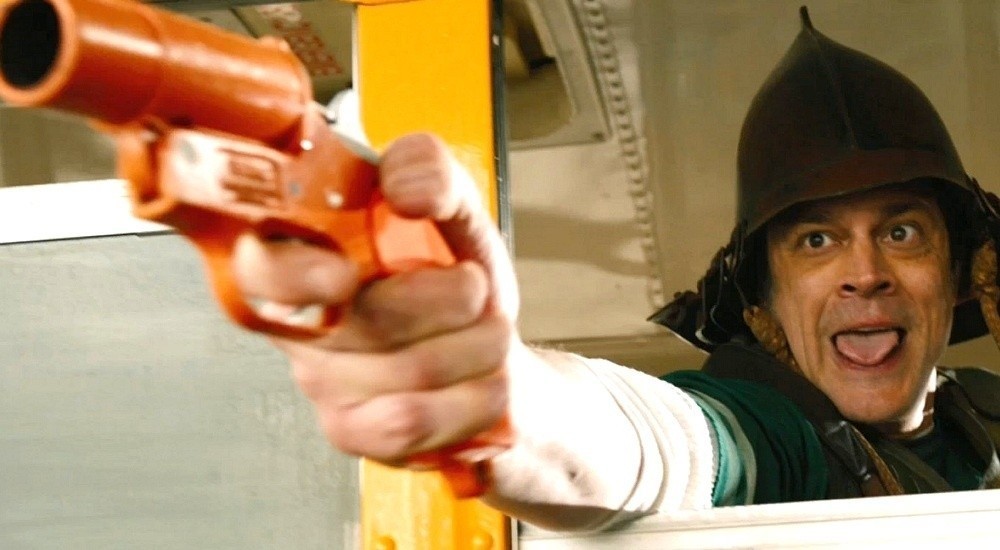 I've long been a fan of Schwarzenegger, despite the fact that prior to his public service calling, his career heights of the 80's had become a distant memory, reduced to starring in such "classics" as Collateral Damage, The End of Days and The Sixth Day. However, just like the comforting familiarity of anything on the McDonalds menu, it's certainly good to see Ah-nuld back on the big screen. So it's a shame that his majestic return is made in such a mediocre film. I mean, sure it's entertaining, but Schwarzenegger should have known better than to sign up to a script that would have been (and probably was) rejected by the Fast and the Furious producers. 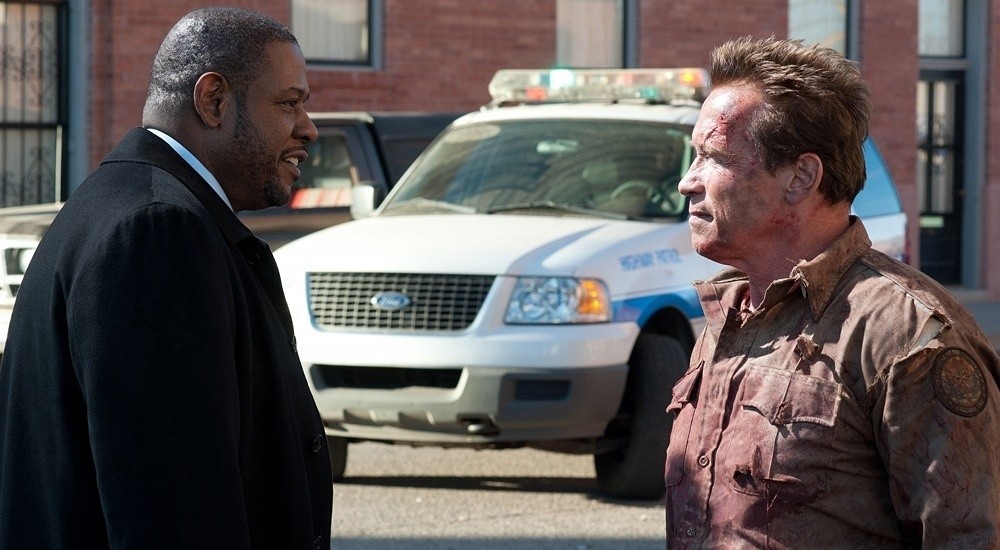 The supporting cast dial in exactly what is required of them and not an iota more, including Forest Whitaker as a law enforcement agent (does he play anything else?), and Johnny Knoxville, who makes it clear why he never made it in Hollywood - seriously, he's a pain in the ass. Luis Guzman plays a bumbling Mexican who is given a moment to shine, along with Peter Stormare whose facial features has doomed him to playing the role of the bad man. 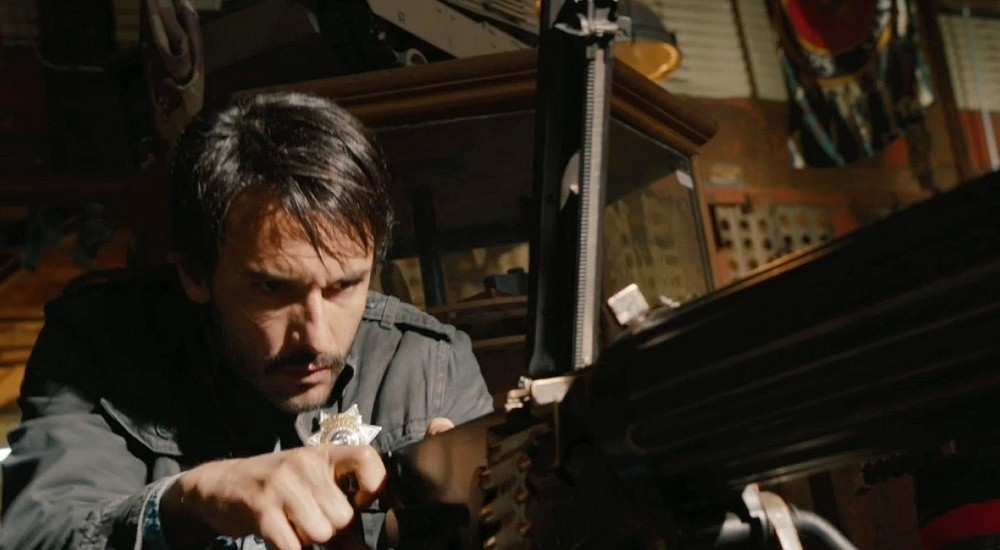 Despite his absence from the screen, it's a surprise that Schwarzenegger seems somewhat bored here. He's not a terrible actor by any stretch, but plays a rather unconvincing part here. It's clear that The Last Stand is a film that wants to tick all the boxes, but fails to satisfy most. Some may recall how much I enjoyed The Expendables 2, and although there are some similarities, the difference is that the latter knows what it is. The Last Stand does not. Its tone is all over the place, and the editing is even more jumbled - in the second quarter I forgot that Schwarzenegger was even in it, and then in the third, the main villain completely disappeared. By the time that the audience finally clicked with the film in the final reel, it was all a little late.

No filmmaker goes in to deliberately make a mediocre film, but I expected so much more here. Despite his 65 years of age, Schwarzenegger still looks fit and well, and can indeed pull off leading man status in action roles. But whether Schwarzenegger still has the hunger to take on interesting and challenging roles remains to be seen. Perhaps the U.S. should have amended laws to install Schwarzenegger as President, after all. 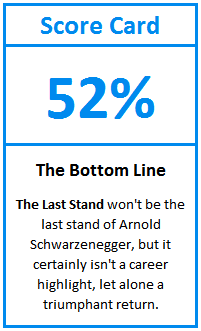