DIGISTOR calls its REWIND software "The Ultimate Archiving Application". The software was designed for ease of use so I don't know about the ULTIMATE part, but I can tell you it's very easy to use. More importantly, DIGISTOR's REWIND software is easy to teach. Although I love them, I wouldn't attempt to teach my mother or grandmother how to use Image Burn or any number of other software solutions. After using REWIND, I think they can handle this one without any fuss.

DIGISTOR is more than just a software developer, they also sell and even bundle all-inclusive packages. Sometimes you don't want to leave compatibility to chance and let's be honest about it; some people just lack the technical knowledge to be presented with options. That may sound harsh, but most of you reading this are the go to computer person in your family, a title often mistaken to mean 24/7 free tech support.

DIGISTOR sent us one of its bundle packages. Even though DIGISTOR intentionally made this bundle for the technically challenged, it's actually pretty neat. 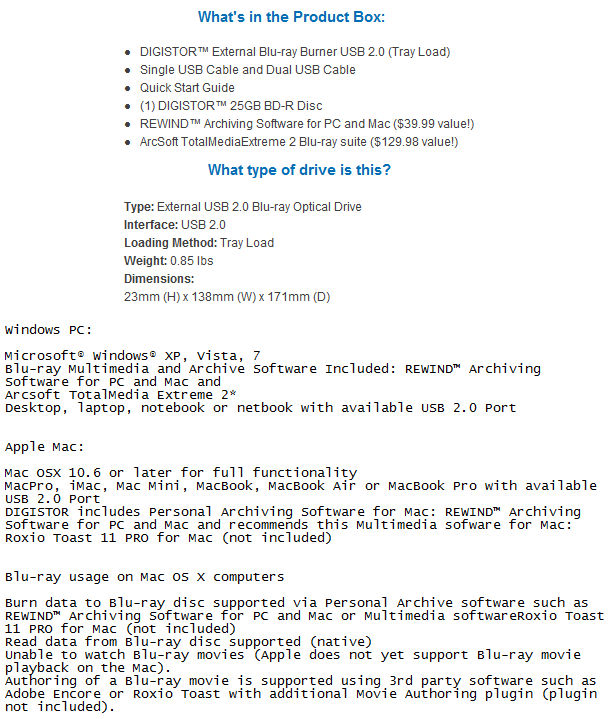 At the time of writing the bundle was on DIGISTOR's website for $149.00 plus shipping. If you already have a Blu-Ray burner and quality disks, DIGISTOR sells its REWIND software for $49.99 as a standalone product. You can purchase REWIND with ArcSoft's TotalMedia Extreme 2 software for $55.00 on the site as well. 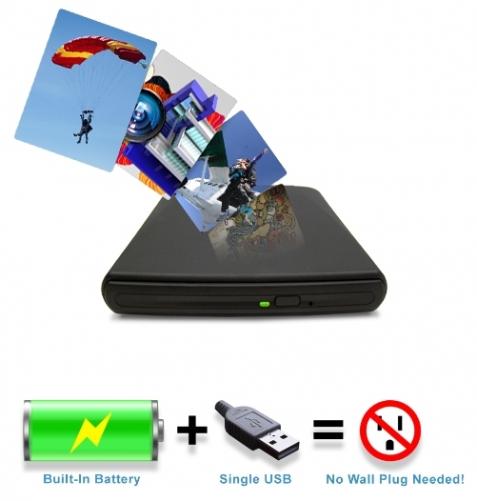 On DIGISTOR's website we found a number of internal and external Blu-Ray and DVD burners listed for sale, all guaranteed to work with the REWIND software. DIGISTOR also sells other backup products like a PlayStation 3 external HDD that ships preformatted for the PS3 file system. DIGISTOR also sells high quality archiving optical disks as well as other accessories that works together to build a total archive system. 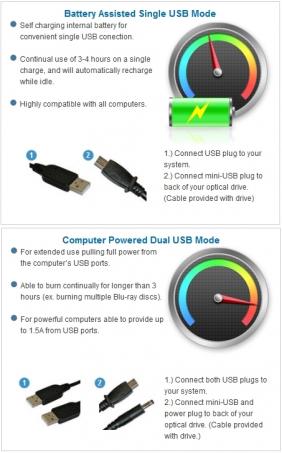 The Blu-Ray reader/writer that shipped in our bundle had a unique feature. It's battery powered so we can archive data on the go without pulling notebook battery power. 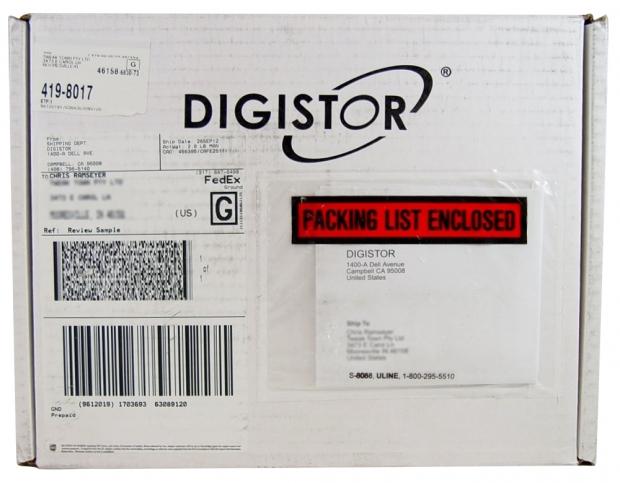 The DIGISTOR shipping box is also the product package so this one isn't ready for the shelves at brick and mortar stores. 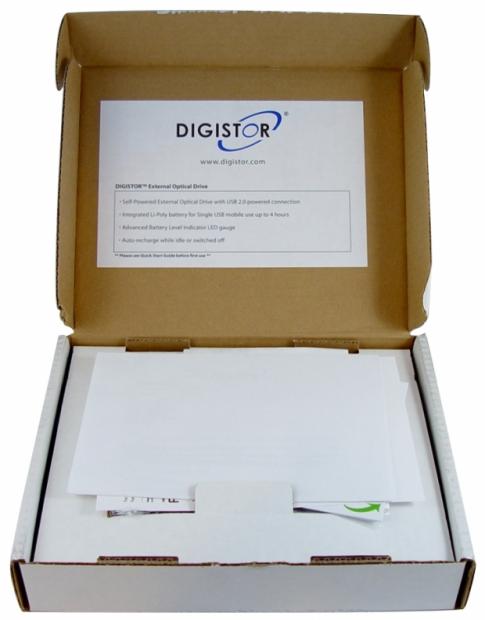 Everything is packed up well with the main component, the Blu-Ray burner in the middle of the box way from the other components. 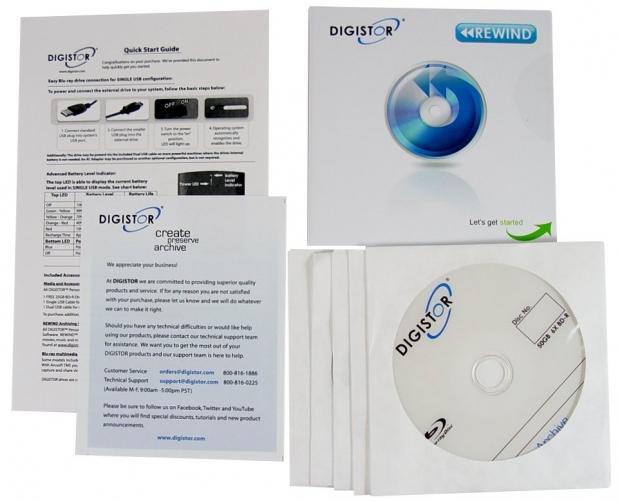 Our package had a few extra Blu-Ray disks - when ordering it's a good idea to purchase a few extras. We also have the archive software, a paper quick start guide and a technical support paper with phone numbers and email addresses to get support. 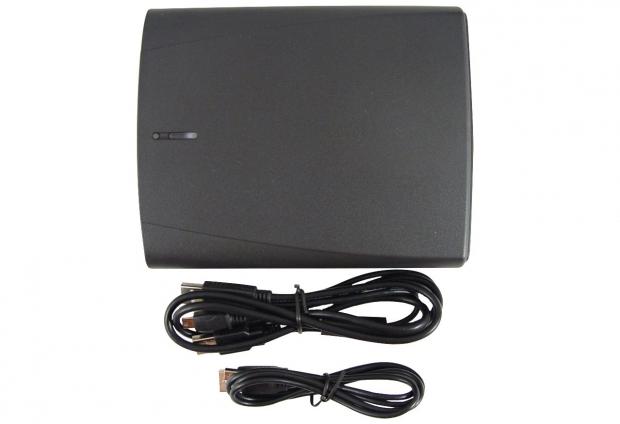 The main component to the package is the software, found on a disk. Since you need a disk reader to access the software we'll start out with the hardware.

The bundled Blu-Ray burner is smaller than I expected it to be.

The unit is USB powered as well as battery powered.

The On/Off switch activates the battery, but without the switch in the ON position your computer will not see the drive. 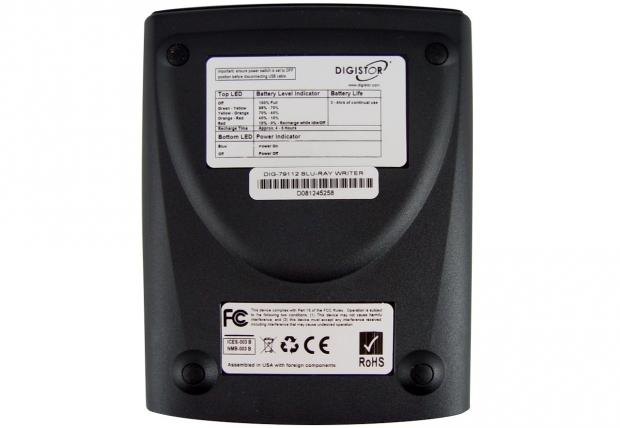 Rubber feet on the bottom keep the drive from vibrating the desk and they also acts as a buffer for vibration from the desk going back to the disk while burning. 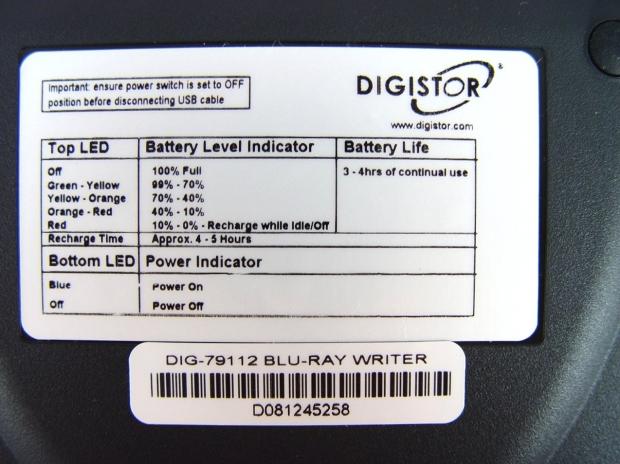 The battery aspect caught me by surprise when I read the label for the first time. DIGISTOR claims a 3 to 4 hour continual use power.

The package shipped with two sets of cables, one with dual USB ports to plug into the host computer. The dual USB plug cable also feeds power to the external drive. The other cable is just a standard USB to USB mini cable. 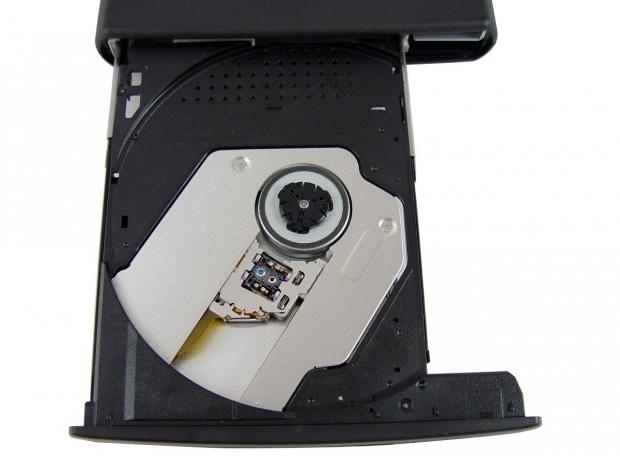 This is the first time I've really paid any attention to a Blu-Ray writer. I never occurred to me they would need two different optical pick systems. Since DVDs and CDs use red and Blu-Rays use blue (for the shorter wavelength), it makes sense. 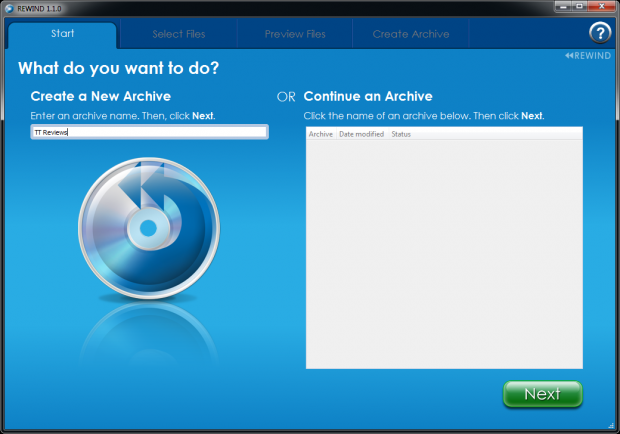 DIGISTOR's angle on data archiving is simple. That's it, just simple. Like make it so easy we can tell you about the entire software on one page.

Here we see the start up screen that doubles as the getting started screen. Just type in what you are calling the archive you're about to create and hit next. 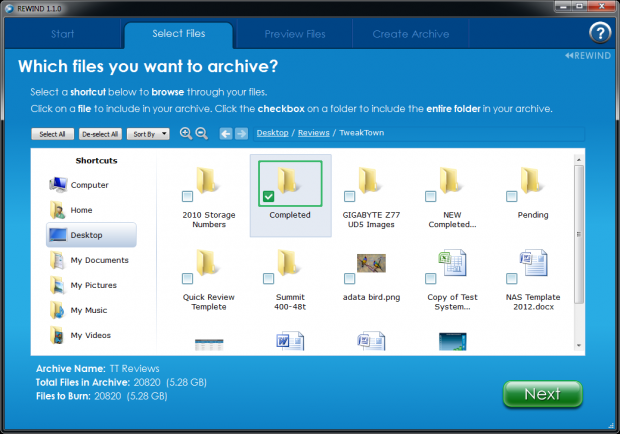 I take all of my TweakTown reviews with me just about everywhere I go. I have them going back 11 or 12 years. The last five years are in the Completed folder under TweakTown. Today we're going to archive five years of TweakTown reviews and news posts. So, to get going I find my folder and select it. 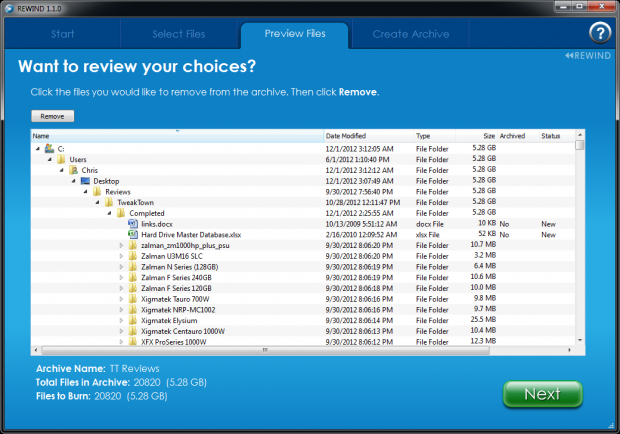 On the next page I can verify everything is there. 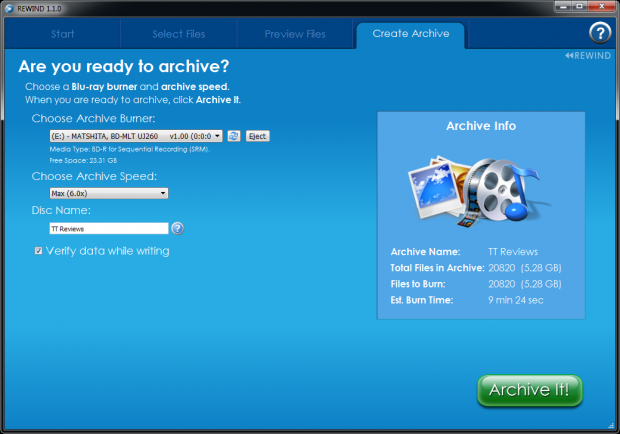 One last screen before archiving 5.28GB of data, here you select your optical drive if more than one resides in the client computer. Then just hit the green Archive It button. 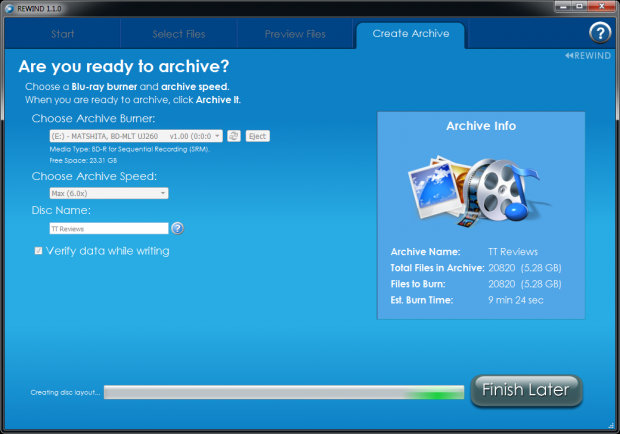 REWIND is doing its thing. 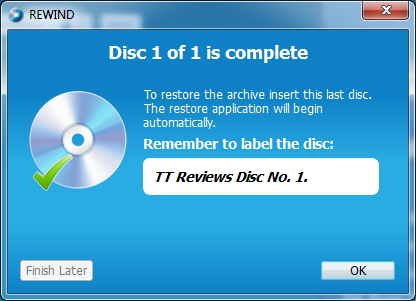 Once everything is complete, you get a new window telling you it's all finished. If your data is larger than a single disk, you are prompted to insert another disk and continue. 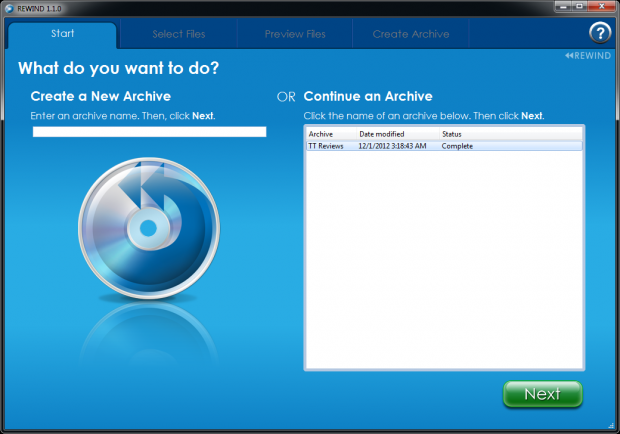 Oh but wait! While the Blu-Ray RW was writing data I finished another review and it needs to go to the Completed folder. Since I want to have a complete backup of all my finished reviews I want this new review added to the archive disk. 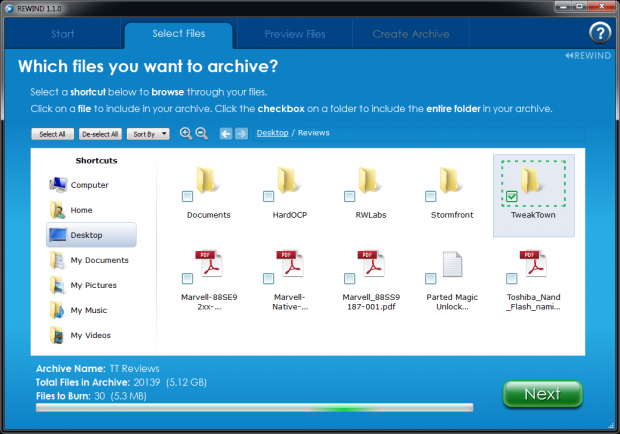 Again, we find our folder. 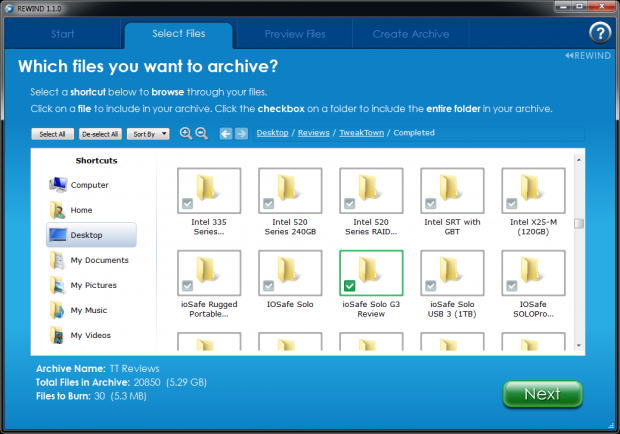 There is our new review ready to go. 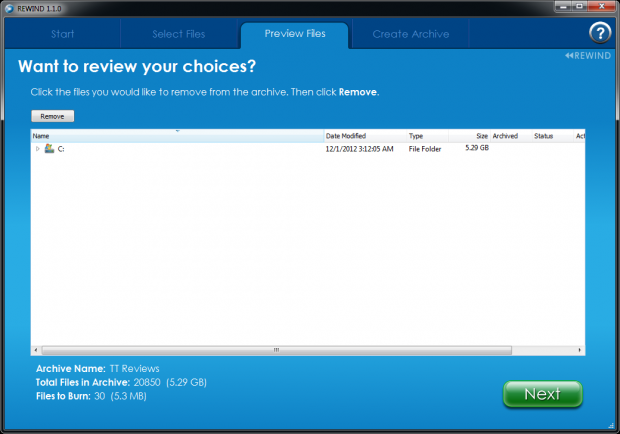 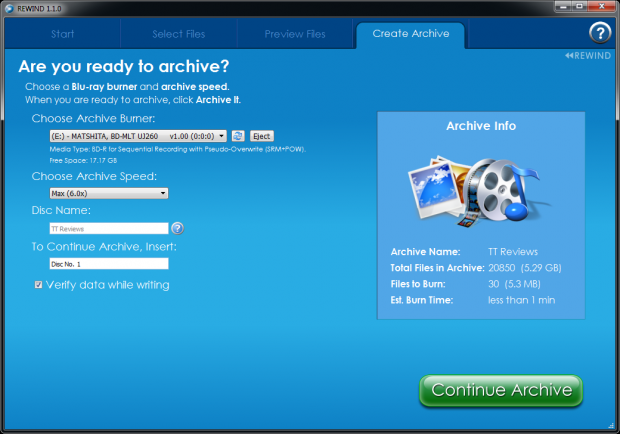 The new date is ready to go, one click away. 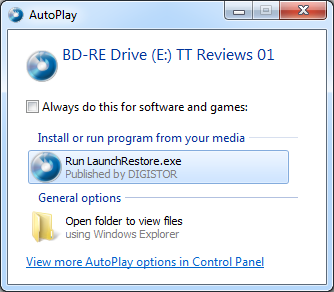 REWIND adds a small application that runs from the archive disk. When you insert the disk you are presented with the option to restore your data.

The software couldn't be easier to use. Today we archived mixed data types, documents, videos, images, PDF files, everything used in a review or news post dating back to mid June of 2007. I hate to say it, but all of my work in five years took less than 10 minutes to archive. Now if we could just get DIGISTOR to make a software package for writing reviews that fast!

You can also access the data without restoring it all. It's all on the disk and accessible. 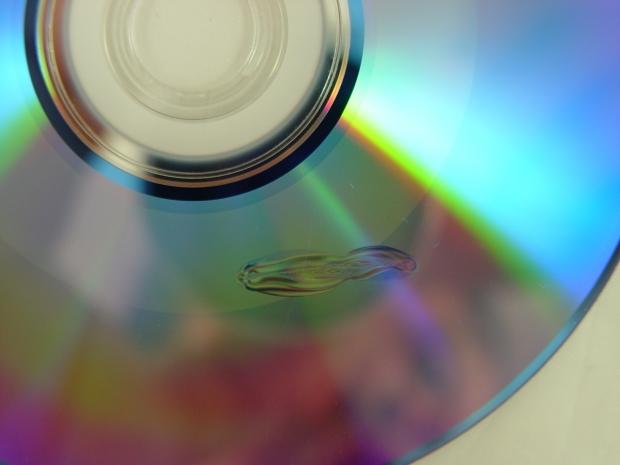 Cloud storage, personal NAS servers and digital distribution have pushed optical media to the side for most of us. The image above was taken while writing this review and shows one of the reasons why optical storage is quickly being displaced. It also shows why it's important to use high quality media like that sold by DIGISTOR. The disk above was just a marketing document hand out from Computex 2010, but it was in a paper sleeve until ran across while I was looking for spare disks to try in the DIGISTOR before writing to expensive Blu-Ray media.

I think for many of us optical media has come, gone and should remain a thing of the past. That said most reading this know others who desperately need a viable method for archiving data, mainly family pictures. Casual computer people aren't ready to dive into a NAS or complex cloud storage yet.

More importantly, they don't want to spend that kind of money for something they don't understand to begin with. The DIGISTOR software or bundle package speaks the average person's language - it's a disk that holds pictures. It might still be magic for them, but they've come to understand the concept well enough.

It's the holiday season and everyone reading TweakTown has someone on their list that could benefit from DIGISTOR's REWIND software or bundle package. The standalone software retails for less than $50 and is very easy to use.

I'm surprised system integrators haven't scooped the software up and supplied it with full systems. It's easier to use than any other data archiving software I've ever used before. 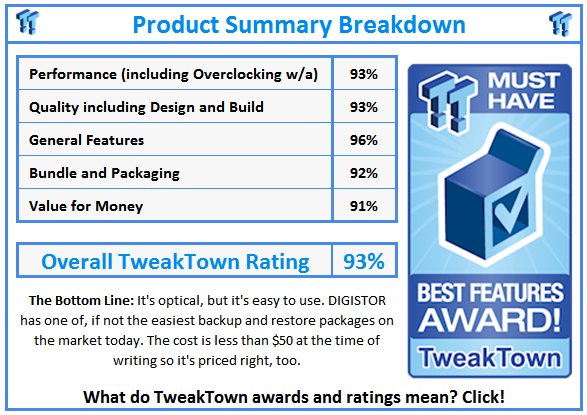