Following both critical and financial successes with Rocky Balboa and Rambo, the formerly dormant career of Sylvester Stallone has enjoyed a resurgence of late. Naturally, if one aging star can pull $131 million, how much could 7 aging stars pull in?

The answer to that was the 2010 tour de force The Expendables, which took the novel approach of mingling stars such as Sylvester Stallone, Jason Statham, Jet Li, Dolph Lundgren, Randy Couture, Steve 'Stone Cold' Austin, Terry Crews, Mickey Rourke, Bruce Willis and a cameo from the then Governator, Arnold Schwarzenegger, in a hard-assed throw back to the films of old.

Written and directed by Sylvester Stallone, it was received exactly as it was intended; as a tongue in cheek nod to the audience and a nice send off for stars that still kinda-have-it, but have definitely seen better days. When that made a reasonable amount of cash for the studio, a sequel was inevitable. The formula for The Expendables 2 is simply to ramp up the best elements of the first film, lightening the tone and putting even more old people in!

When the mysterious Mr. Church (Bruce Willis) coerces Barney Ross (Sylvester Stallone), the leader of the Expendables, into accepting a reconnaissance mission to retrieve an item from a downed airplane in Albania, the group find themselves at the mercy of arms dealer Jean Vilain (Jean Claude Van-Damme) and his opposing force. The retrieved item is exchanged for their lives, but not before one of their own is slain. Vilain escapes, but the Expendables vow vengeance, tracking them across Europe. But Vilain has an even more devious plan and now the means to execute it.

Where the original film was a more serious and to a certain degree, joyless film, The Expendables 2 plays up the humor, solidified by the casting of internet favourite Chuck Norris and Jean Claude Van Damme, ensuring that the tongue is firmly in cheek. Arnold Schwarzenegger and Bruce Willis expand their first film cameos into much larger roles and don't shy away from battle, in a pleasing end shootout which shares more than a passing similarity to the 'No Russian' level of Call of Duty: Modern Warfare 2.

Make no mistake, this is not high art, and Lionsgate films won't be in contention for any Academy Awards. This is fan service, and no attempt is made to skate over this fact. Numerous allusions are made to the roles which made the stars household names ("I said I'd be back!") and even the meme's of Chuck Norris are referenced ("I heard you got bitten by a king cobra" "Yeah. But after several days of excruciating pain, the cobra died.")

You'll not have any life affirming moments during The Expendables 2, but if films are meant to be entertaining, then it's certainly one of the most entertaining movies of the year. Can I just recommend though, unlike the midday session I attended, don't take your under 10 year old kids. It's just bad parenting. Cheers. 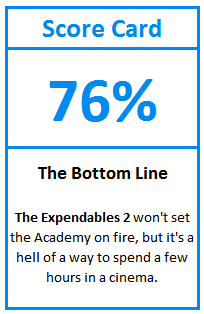