When Director Christopher Nolan re-launched the stagnant Batman franchise in 2005 with Batman Begins, fans still pouting from the disaster of Batman and Robin were taken by surprise with the gritty and dark portrayal of the caped crusader. A critical success, but one that disappointingly limped over the line with $200 million in domestic US box office takings.

Still, Warner was emboldened by the signs of life and chose to move forward with the 2008 sequel The Dark Knight Rises. The tragic passing of star Heath Ledger lent the film a new air of importance, and his take on the Joker was a masterstroke of brilliance which earned him a posthumous Academy Award. The film was a smash success, nearly tripling the gross for Begins.

Four years later, we have what's been billed as the final entry in Nolan's reimaging - The Dark Knight Rises. By the end of the film, you'll understand why this is an amazing film to hang up the bat cowl with.

It's been eight years since the events of The Dark Knight. Batman (Christian Bale) hasn't been seen since, but following the belief that he murdered Harvey Dent, he's still wanted by the police and a persona non grata. Bruce Wayne has shunned public life and has become a recluse. A period of peace has befallen Gotham City. But evil is rising. There's rumor of activity in the cities sewers, and the name Bane (Tom Hardy) has become enough to instill the fear in the heart of the police.

Wayne Enterprises has become virtually bankrupt after an energy project was ceased when it was discovered its elements could be constructed to become a nuclear weapon.

But Bane doesn't simply want to destroy the city - he wants to crush its spirit, along with any hope for survival. The police are outgunned and outnumbered, and the only hope for survival rests with Batman. But the aging hero has seen better days, both physically and mentally and may or may not have what it takes to come up against his most fearsome and powerful adversary yet.

In true Nolan fashion, the bigger plot is slowly trickled until it culminates in a horrifying realization, and that's where the gears of the movie truly move into fifth gear. Just when you think you've worked it out, another element is thrown at you and that's where the real joy and intense drama of the film come from.

Unlike standard sequelitis, where its familiarity can sometimes work against it ("here we go again..."), Nolan has created a saga where it actually feels like everything that has happened up to this point has led to this moment. In the context of its two predecessors, The Dark Knight Rises truly is the pay off, but to get there some sacrifices have to be made. At times the film is hard viewing and overwhelmingly bleak. This is no kid's film, to be sure.

The film isn't perfect. I've never really fawned over Nolan's handling of action scenes, the finale of the films predecessor culminating in a mess of camera moves played out in darkness. Here too, some of the action is somewhat lacking in excitement, such as the mass mano et mano scenes. Additionally, the film feels disconcertingly unbalanced, with the first hour of the films 164 minutes just too slow and pondering, compared with the roller coaster ride of the second and third quarters.

Still, for a film that gets so much right, I am happy to overlook its relatively minor transgressions. The cast are uniformly great, and Christian Bale especially rises to the occasion, as a bloodied and broken man. Michael Caine gives a very emotional performance as the loyal Alfred, unwilling to see Bruce Wayne destroy himself.

The Dark Knight Rises truly feels like an overwhelmingly satisfying end to the Dark Knight saga. Warner Brothers will inevitably want to continue with the franchise, but I'd urge restraint. Whereas the franchise was rested following the disappointment of Batman and Robin, I'd suggest that Warner waited it out for the very opposite reason. As a portrayal of the comic world's most complex character, I'm damned sure that it can never be topped. 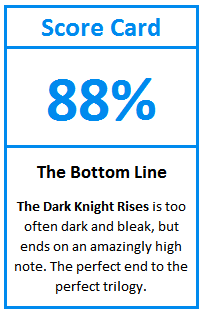