Companies are starting to come out of the wood work with USB 3.0 storage products, many of which were released at CES 2011. We've been testing USB 3.0 portable storage enclosures since November 2009 when we hosted the very first USB 3.0 product review online. Since then we've seen large and small devices, but the trend is leading to smaller and more compact storage that mates us to the 5G USB 3.0 protocol. 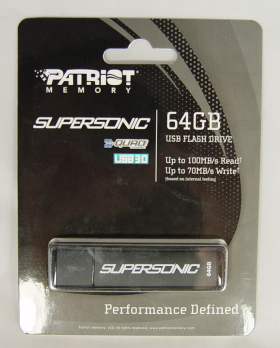 In an effort to continue the progression of smaller, faster storage products, Patriot Memory has sourced the world's first native USB 3.0 to flash controller. By eliminating a bridge chip the new Patriot Supersonic is smaller than any other USB 3.0 thumb drive we've tested and offers less latency as well. Patriot claims the new Supersonic is able to achieve read speeds of up to 100MB/s and write speeds of up to 70MB/s. These numbers are much lower than the high end SSD based storage enclosures we've reviewed like the OCZ Technology Enyo, but the Supersonic is also much smaller and can be had at a much lower price point.

When it comes to pricing we found the Patriot Supersonic selling for as low as 112.00 USD for the 32GB model and 209.99 USD for the massive 64GB drive. This is around twice the cost of the Patriot Xporter XT RAGE, a USB 2.0 quad channel thumb drive. You are paying a premium for the USB 3.0 model even though they are both quad channel designs. 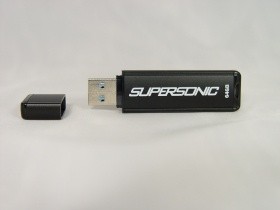 Physically the Supersonic looks like many of the traditional flash drives we've seen for the last few years. There aren't any belt clips, blinky lights or gimmicks, just a standard size metal flash drive with a cap. This leads us to one thing we really don't like with many of these types of flash drives, they don't have a place to put the cap when you have the drive in use. Patriot also omitted a lanyard with the Supersonic, an accessory that was included with the Magnum. 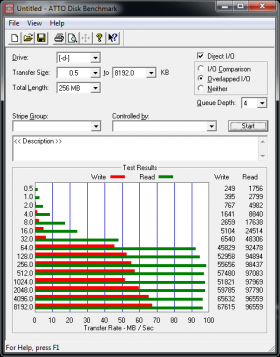 Users spending over 100 USD on a flash drive aren't looking for anything that can be called standard, ordinary or plain. The outside of the Supersonic can be called all of those things, but the performance offered by the drive is nothing short of exceptional.


In our testing we achieved a maximum read speed in HD Tune of over 121MB/s. The ATTO scores shown at the bottom of the first column were a little more conservative, but still managed a 96MB/s read speed. The write speed in ATTO was 67MB/s; very close to Patriot's claimed 70MB/s. 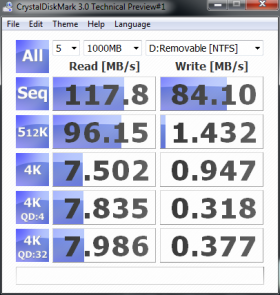 One place where I was caught off guard after testing several USB thumb drives for many years was the 4K read performance offered by the Patriot Supersonic. In Crystal Disk Mark the Supersonic achieved over 7MB/s while reading 4K block size data. That means we should see some very good file transfer speeds when reading back small files that are part of a larger package, i.e. transferring uncompressed programs and Microsoft Office files. 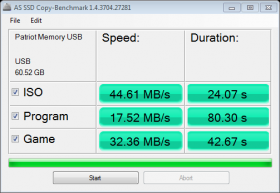 To put that theory to the test, we used AS SSD's Copy Benchmark that transfers files to and from a target. The Copy Benchmark transfers large ISO files, small Program files and a mix between the two in the Game test. In the past we've seen very good large file transfers from thumb drives, but the small file size tests would drive the scores down to unacceptable levels. The Patriot Supersonic quad channel design undoubtedly plays a large role in the 17.52MB/s Program score we achieved. To put things into perspective, the Super Talent Express RAM Cache was 10MB/s slower and it took more than 100 seconds longer to transfer the same file.

Looking at the performance data from these two new USB 3.0 drives, the real world performance differences are very clear. The Patriot managed to transfer the ISO file at 44.61MB/s taking just 24.07 seconds and the Super Talent Express RAM Cache did the same test at 14.97MB/s at 71.73 seconds. The mixed file size Game test offered even more insight into how these two compare against one another. The Patriot Supersonic in this test transferred the data at 32.36MB/s and the Super Talent Express RAM Cache only delivered 11.37MB/s. The time difference between the two was right around 80 seconds. The Patriot Supersonic was just faster across the board in all our testing.

Patriot was late to the USB 3.0 game and let the competition get a head start. But that was last year. In 2011 Patriot is off to a great start with the Supersonic. The Patriot Supersonic is much faster than many of the USB 3.0 thumb drives I've seen to date and the native USB 3.0 design keeps the drive cool. This also adds to notebook battery life when you are on the go; something that is often overlooked.