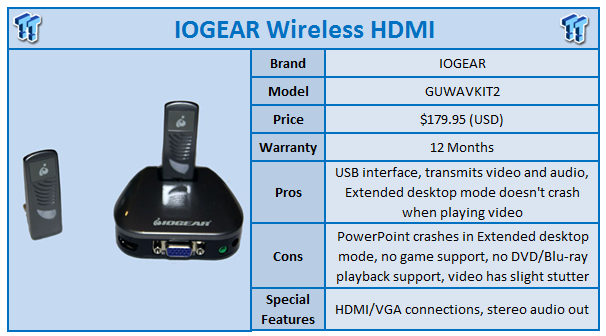 The first thing that struck me when I received the IOGEAR Wireless HDMI Computer to TV Kit (GUWAVKIT2) was how similar the hardware looked to the Warpia wireless adapter (with the obvious exception being the brand labeling). Having had a somewhat frustrating experience with the Warpia, I was wondering if things would be a different story this time around or if my review was going to be fraught with difficulty in regurgitating everything I already had to say on the subject. As I unpacked the IOGEAR adapter, I braced myself for the worst.

I took the receiver unit and plugged it up with the provided AC adapter, then connected it via HDMI into my surround sound audio receiver. Once that was finished, I booted up my laptop and inserted the driver disc. There was no prompt to check for the latest drivers (and I had made sure that my NVIDIA drivers were still up to date, which they were), so I went ahead and had it install what was provided for on the disc. 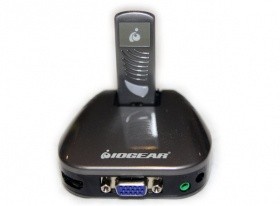 Once the installation was finished, I saw mention of the fact that I should reboot my laptop before using the adapter, but it was simply listed on the final screen of the installation program. I was never presented with a prompt to reboot, and if I had been in a hurry, or hadn't been paying close attention, I might have missed it. I'm not sure how much of a requirement it is to reboot, but I went ahead and did so anyway. 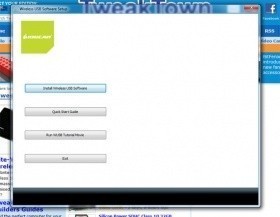 Once the computer had returned to the desktop, I plugged in the transmitter unit, and after Windows properly discovered the device and the DisplayLink software ran through its check, I had a spitting image of my desktop being wirelessly transmitted to the TV. Like the Warpia adapter, there is no way to correct for overscan/underscan, so the edges of my desktop were cut-off with no way to correct this. Unlike the Warpia adapter, I still had the full Aero interface (including the 3D window task switching) instead of having it automatically switch me to Aero Basic. As a quick aside, the DisplayLink icon in the system tray has an option to check for the latest updates to the software. I ran that and the software was reported as being up-to-date. 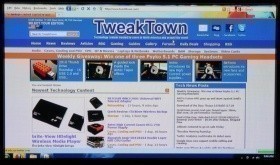 I loaded up my Internet browser and proceeded to Hulu to watch some streaming video. While it's certainly watchable, there's still an element of jerkiness, mostly notable when the video is expanded to fill the screen. Going to YouTube, I pulled up a 720p video and it played fine as well. It still wasn't quite smooth, but it wasn't any worse than SD. The "Optimize for Video" option on the DisplayLink tray icon was selected, but it made little difference. 1080p video actually ran somewhat well for the most part, but eventually the video came to a screeching halt and wouldn't continue playing. 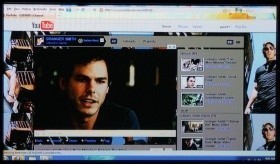 Since the Warpia had problems with PowerPoint 2010, I also included that in my testing, running a very basic presentation in full-screen. It worked without problems, but PowerPoint has more advanced features, notably the ability to let you view all the slides while presenting in full screen on a second monitor. This required me to change the display from "Mirrored" mode (in which the desktop and the TV show the same view) to "Extended", which adds on a second desktop that is shown on the secondary display. Unfortunately, the IOGEAR and Warpia share a common bug in that PowerPoint goes to black (on the TV) and white (on the laptop) when trying to run a presentation this way. 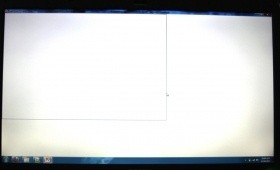 While in "Extended" display mode, I also returned to Hulu and YouTube just to make sure I didn't have the instability issues I'd have with the Warpia. On that wireless adapter, I had a BSOD (blue screen of death) every time I tried to play video on the extended desktop view. Thankfully, everything worked perfectly this time around.

Trying to play a DVD or Blu-ray disc was a different matter entirely. Like the Warpia, all I could get from either was a black screen with the audio playing in stereo on my receiver. This occurred whether I was using Windows Media Player, VideoLAN, or Power DVD (for Blu-ray only). iTunes video content was fine, though with the same very slight stuttering effect that the online videos had exhibited. Since the surround audio track isn't transmitted via the HDMI, I have to wonder about how useful these USB adapters are for a home theater environment even if it had the ability to show DVD/Blu-ray content.

No surprise here either, but the IOGEAR Wireless HDMI adapter cannot stream video game output to your TV. It doesn't make the claim to, but I tested it anyway just to double-check). It's simply another feature that might be nice to have on your TV every once in a while, but the IOGEAR adapter doesn't support it. I'm probably not going out on a limb to say that USB adapters of this type will probably never be able to do so given that it would have to be sucking down information from the graphics chipset itself.

That the IOGEAR is limited to Internet streaming video only (or iTunes video) makes it quite an odd device. It would seem to be better suited for business-use rather than home theater, and mostly presentations in that sense, but the fact that the "Extended" mode on the desktop doesn't work with PowerPoint 2010 makes its usefulness for even that very limited. Granted, it may have no issues with older versions of PowerPoint, but for those with updated software the lack of compatibility is puzzling.

For wireless transmitting your desktop from your computer to your television, your best bet is with a wireless HDMI transmitter if your PC is so blessed with a port. If not, then the IOGEAR is actually a decent option, much better than the Warpia even though both seem to use the same hardware, but here's hoping a future driver update will allow PowerPoint 2010 to actually work when using the extended desktop mode.